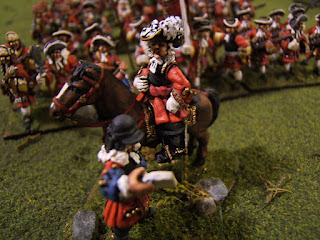 I actually do have other collections than my War of 1812 stuff. Actually many more.  That is what happens when you have been at it for more than 30 years and love all eras of human conflict , have the crow's love of shiny new things, and have the attention span of a ferret.

I cleaned off the table of the terrain I set up for the previous War of 1812 fictional battles I played and decided to lay out my Grand Alliance/1690ish collection for a, well, grand review.  This collection started small but expanded (as all my collections tend to do)

It began as "the other side" for a friend's Highlander's force to do the historical Battle of Killiekrankie 1689.  This we did at the local convention. I based them as he did and continued, as it looked good. However I had more of the figures left over and thought to do the Battle of Sedgemoor of Monmouth's Rebellion of the same year - having many 'rebel' looking extras and all.  Then Mark Allen came out with a very nice series in Wargames Illustrated about James's Irish army and some other figures I had  from a club's failed pirate game were repainted to become non-red clad British units of the Glorious Rebellion and thus were added in William III's Irish campaign and ....well you get the picture.  It is a very diverse collection.

So here it is in picture: 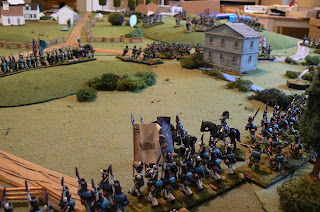 "We was all trotting at a pace", wrote Sam O'Man of the U.S. Twenty-First Infantry Regiment in his biography, "the Rifles ahead of us had fallin back and those grey fellers with fur caps continued to pepper us with shots.  I was a couple a paces to the right of the Colonel who roared, "At 'em Boys!!"  "I looked to over to the right and the Twenty-Third was keepin pace.  The hill, which was the object of our'n charge now was suddenly topped by men in grey coats.  The Colonel, he yells, "Not'n but damn militia Boys!"  But them militia cool as ice, without a sound, lowered their muskets for a grand volley.  We was shook and kinda stopped in our tracks. Another volley hit us hard. Exclaims the Colonel, "They are regulars, by Golly!!"

Outnumbering the British 49th Foot (for which I modelled grey greatcoats which they historically wore at the real battle of Crysler's Farm - see my 28th September post) the two American units could not shake off the initial disorder from the directed skirmish fire of the Voltigeurs (in their grey uniform and bearskin caps) and the 49th which had taken a reversed slope position ala Wellington.

The same scenario played out on what will become 'Red Hill' to the locals from its blood stained grass as its eastern slope was again scene to heavy casualties.  Again the US Rifles were beaten back by the Voltigeurs and exposed the two columns of the First and Forty-Fourth Infantry Regiments to the volleys of the British de Meuron Foot.  However, these two units stayed on the slope pointing shots up hill until the Rifles abandoned the fight knowing they could not counter the British de Watteville Regiment marching to their flank.

"We were beat. Simple as that.", was the conclusion of the American General's ADC, Lt. J.R. Ewing.
Posted by DougH at 14:33 No comments:
Labels: fictional battles, War of 1812

While my "Lundy Lane Cemetery" has a couple of seemingly new graves within, in 'honour' of Halloween yesterday, I believe my most 'ghoulish' wargame object would be my "after the battle cleanup" stand. 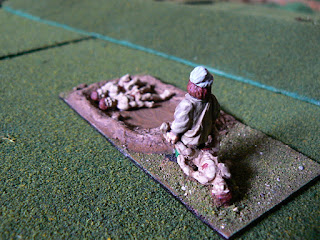 In previous eras, humans were more pragmatic and would remove valuable clothing from the bodies. The dead were, I believe, ancients nude skirmishers, and are carried by a 17th century artilleryman (Foundry I think). 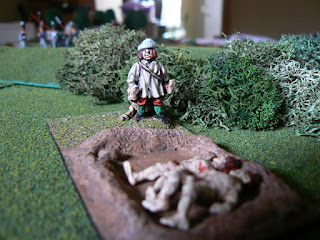 Nevertheless it forms a tabletop decoration for my Grand Alliance c.1690 collection.
[Yes I have more, much more (!) than the War of 1812]
Posted by DougH at 14:35 No comments:
Labels: c1690, modelling
Newer Posts Older Posts Home
Subscribe to: Posts (Atom)