Bringing a ‘faust to a tank fight……


“What a Tanker!” is a unashamedly tank vs tank game.
However, wargamers being wargamers,  can’t leave well enough alone and many have done much work to expand upon the original premise to include anti-tank guns and anti-armour infantry weapons.  While I have done so, I was surprised to discover that even the Two Fat Lardies authors have also done their own version!  [ LARD Magazine 2019 ]  Their rules had the panzerfausts/bazookas stationary while I have gone the 'more traditional ' route and play the mobile infantry carrying blasters of tanker hell more in tune with the original rules.

As a play test, WillB was given my 3D print Matilda II - a Lend-Lease provided by the British,  while I played the late war Germans. These are Warlord plastics painted by me recently and armed with the always popular panzerfausts for hunting the lost tank in a Russian village. 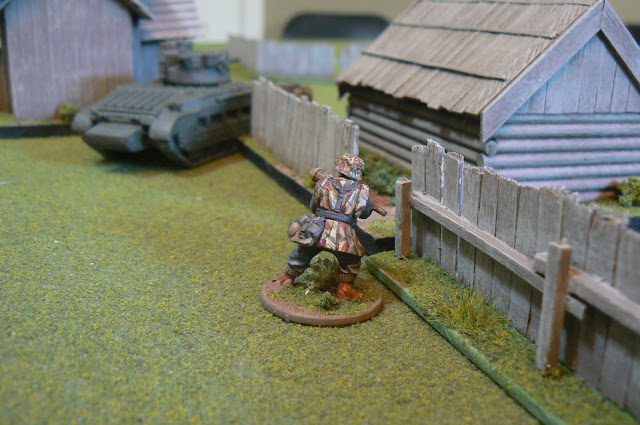 Because of the need of certain dice at certain times …and that not happening… it does mean the infantry don’t necessary have free reign and indeed at times became the hunted.  At one point the Matty rounded the corner of the church almost running down one of the Germans who was frightened stiff with fear (he did not get any ‘move’ or even ‘fire’ dice at the time).  The tank could not move any further unfortunately and the German finally turned and made his escape. 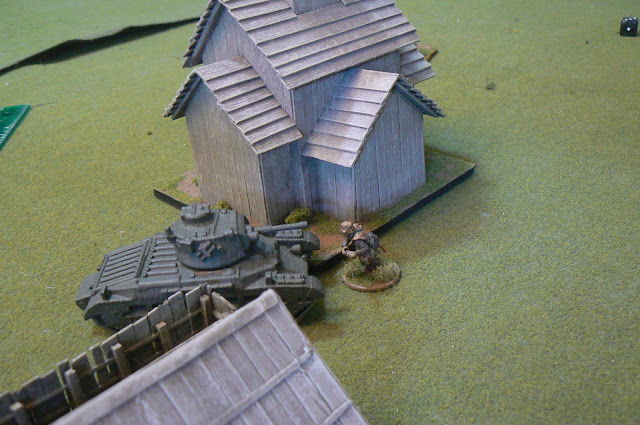 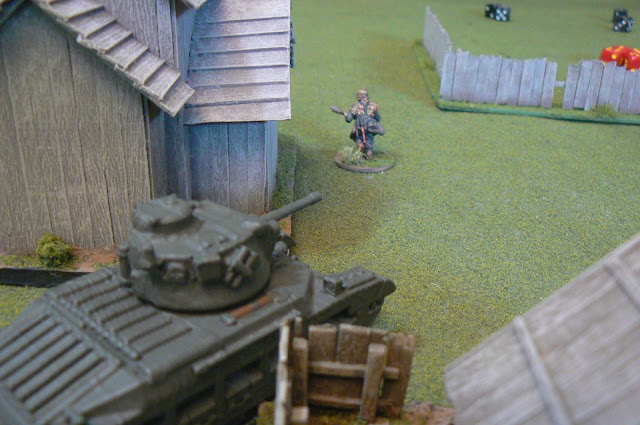 It gives me the opportunity to have the late war enemy tanks on the table without the need for me to build an additional tank model to face them ;))


The Opolchenie are Russian militia which served in the Russian armies during the Napoleonic Wars and were especially prevalent in 1812.  While mostly engaged in engineering (...digging) field fortifications but some 10,000 were said to be under arms during the battle of Borodino.
With that in mind I made two elements for our game of that huge battle a few years ago.

However I was given some more sprues of what were Warlord Prussian Landwehr (1st Ed) so I decided to add a third more to my militia force.  It would take only a bit of scraping removing all the "Prussian" bits and putty adding to some of the pants for the fuller Russian look and of course the full beards as shown in contemporary illustrations. 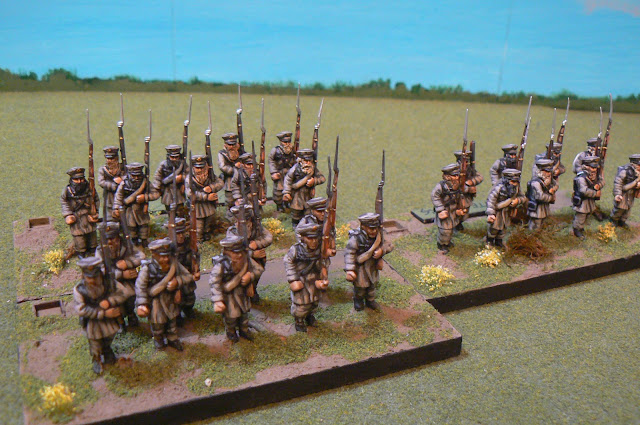 
“Napoleonic baggage” is what he brought to his marriage to Marie Louise….
…or perhaps the necessary wagons on which an army must exist.

Needing models for both the grand game and the newer smaller focus of all-cavalry actions, I based both horse and wagon onto thin bases, but then created the thick bases of the grand game for attaching them temporarily.
These are my Dutch-Belgians of the ‘Waterloo Campaign’.  The horses are Essex, the riders plastic conversions, and the wagon is of MDF wood from Warbases. 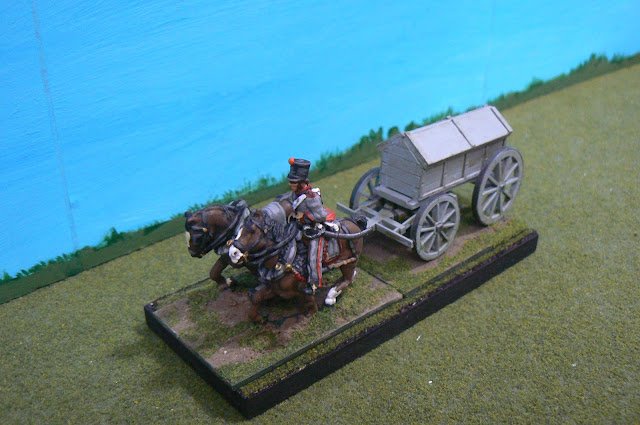 
A tank model with this much damage is just scrap  iron  plastic.

My friend WillB builds his nice tank models then kindly donates the left over bits to me. This time parts of a German panzer including a partial turret and hull.  From those I glued on any and every bit or piece which he left on the sprue.  The gun really sets off the model sagging as it is.  I hope the whole image suggests a massive internal explosion. 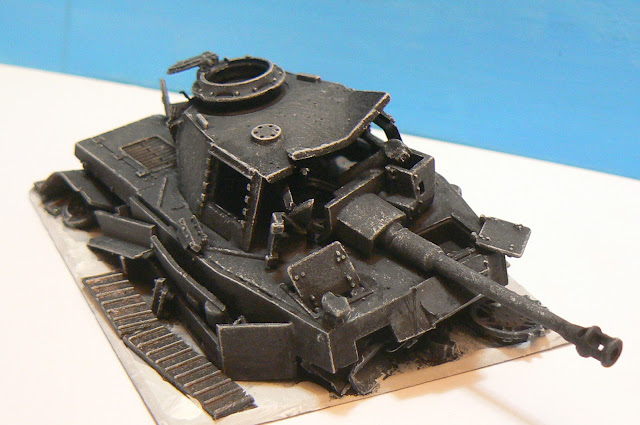 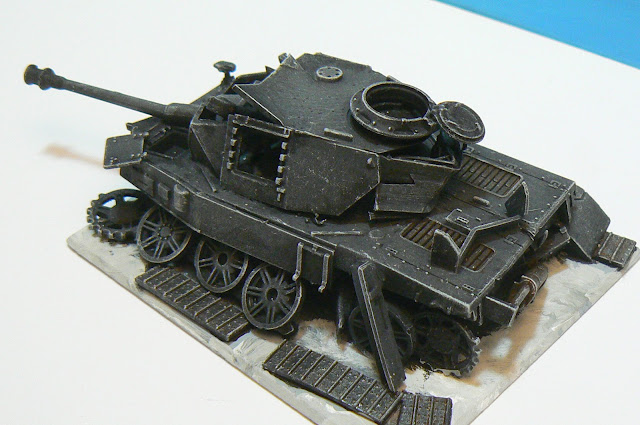 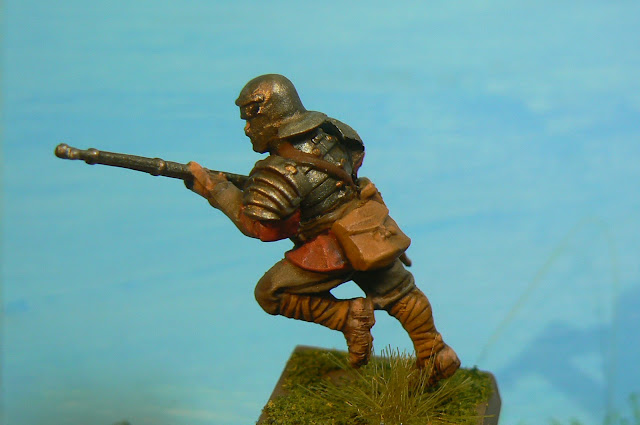 Inspired by a friend’s inventive mashup of Landsknecht armed with a MG34 WW2 machine gun (!) and images of modern soldiers with very Imperial Roman looking armour of which I have always wanted to create,  I have done my own plastics mashup of a Imperial Roman (c. 100 AD and an Imperial Japanese infantryman WW2 (c. 1940) both by Warlord Games.

Obviously the armour - the famous Lorica Segmentata must be shown - heck, not Imperial Roman without it - as would the helmet which I smoothed of details to get a slightly more modern look.  Steel colour was used but a more modern dull green could be effective for more current looking soldiers.  Two more quintessential Roman items are the ‘caligae’ [army sandals] and the ‘baltea’ [ the dangly straps in front of, well, the dangly bits ]. Both these were kept, but the main uniform is early 20th century.  The Japanese uniform has a long tunic covering the rump which was about the same length as the Roman one thus I painted in a dull red which is over the long sleeves and trousers painted a modern dull colour. As this uniform is from the 1930’s/WW2, I did not go for a baggier camouflaged version and so left the puttees which are painted in buff so giving a leather bound look instead (something picked up from the barbarians in the intervening years?). 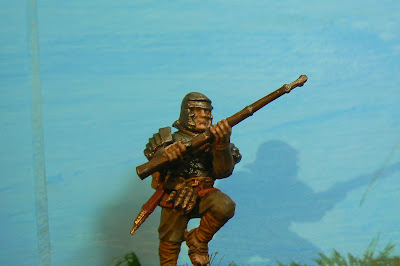 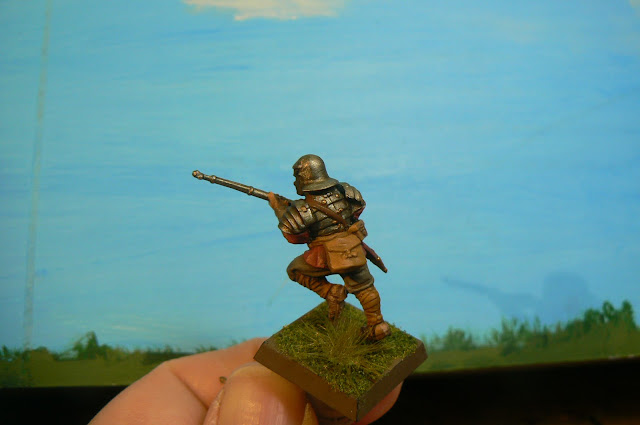 The large amount of plastic Romans I have might still be “amended”.  Looking toward making them the “Lost IX Legio”.  Lots of skeletons, mangled limbs, dead flesh and rusted armour. That could be an army.  Now to get some bits and parts.

I have cheated a bit and already created a ballista crew from the few skellie bits I had at the very bottom of a box for some reason…. 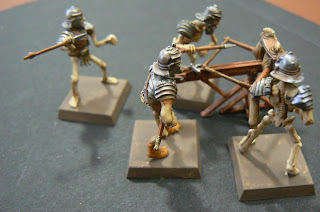