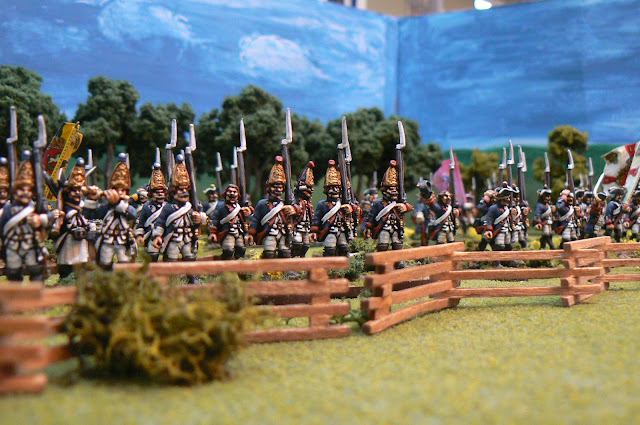 To his Excellency Lt. Gen Burgoyne

Please indulge me to describe the actions of hie Excellency's Brunswick forces this day in service of the King.

The Grenadiers had the post of honour on the right of our front line with the Regiment of v.Sprecht to the left. The second line wascomposed of my regiment and that of Hesse-Hanau.  Due to the constriction of the field, the v.Rhetz formed column on the left while the Dragoons (dismounted) moved in the light woods to the right of the field. Our light cannon was in reserve.
a fence half-way along the field at appropriately musket shot to the rebels position within the forest had Specht’s regiment halt for a turn to cross [1] so that the column of v. Rhetz moving swifter took up the lead formation at while forming line of battle sustained fire from the hidden rebels but without pause continued their maneuvers [2].  The fire from the forest then ceased [3]
allowing the v Rhetz to move to the fence marking the end of the field.
The Grenadiers meanwhile gainfully crossed the fence and advanced toward the tree-obscured rebel militia but halted before the final advance [4] which, with a huzza, cleared the final rebels from our path of advance [5] but at a heavy cost of 30% casualties and 6% of our total this day [6].

Notes:
[1] I placed the fence at 20” from the militia position and for each inch the leading German unit came closer to the Americans, the harder for them to roll under d20 and thus ‘stay to their guns’ and continue the fight. I placed a disorder for failure which they needed to roll off (per the rules) before they were able to fire (their only activation action)
[2] I rather like the look of the formed line on which the figures are based rather than the proscribed ‘blob’ allowed of the rules, so I had this unit ‘go through the motions’. Most of the units are a healthy 18 figures strong. Rules ='large unit' which can take more casualties to get to the troublesome 50%.
[3] the Militia on the right failed their ‘morale test’ and retreated from the fence into the forest not allowing firing.
[4] they, of course, failed activation and stood there inches from the fence and the militia who passed their morale test and directed well placed shots into the Grenadiers.  Most of the Grenadier casualties occurred at his stage.
[5] the Grenadiers having passed their morale test (needing the +1 for elites to do so!) charged the fence line and the militia morale broke.  The Germans did not fire a shot during the engagement.
[6] The v.Rhetz regiment sustained one hit.  The rebel casualties are unknown but thought to be negligible.

2nd and 3rd Battles at Plotnaya


At the one-day mini-convention the club put on, I decided to host an extended session of my “What a Tanker!” Russian winter end of 1941 affair. 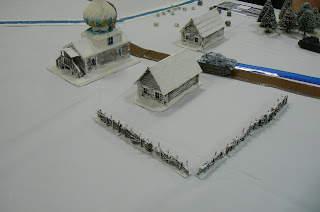 WillB donated the use of his tanks if required as he went off to play a CoC game, so my first game had players select his 38t and one of my PzIII vs his Russian Valentine. I joined the Russians with the Lend-Lease Matilda so making it an even 2 on 2 battle.

I used a numbered chip out of the bag initiative system rather than the roll off by players thereby all of them knowing the sequence.  More of a ‘unsuredness’ factor. 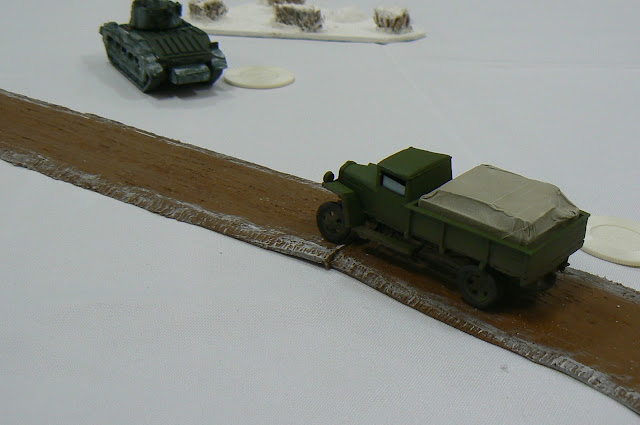 The truck also used the command dice but ignored all but the ‘Drive’ and ‘Wild’ dice.  The Germans ignored the truck (and the player’s did not even ask me what it was for!) but as I stopped at the bridge and had soldiers get off the truck and indicated that future ‘Wild’ dice would now indicate the engineering progress of wiring the bridge. NOW the truck was targeted and, as it had just stopped, were the explosives unloaded?  A dice roll indicated no and so a fire ball ensued!

However the Germans were nonetheless getting pounded.  No outright destruction but a slow reduction of temporary command dice until the PzIII needed to be abandoned after my Matilda gained his flank within the town.  About half way through the battle, my tank was the only one with all its command dice intact.  I managed to slowly (I was driving a “slow” tank, but I do throw lots of ones!) around the backside of the town to hit the 38t in the butt.  No destruction again but the German crew again was forced to bailout so having the Russians protecting the bridge.

——-
With the second session, a new group of players, and while leaving the terrain the same, had the orientation change 90 degrees and now three players aside.  I played German this time with a ‘fast’ 38t to make better use of all the 1s aka “Drive” dice I usually roll.

I gave up on any scenario description - players tend to forget those anyway and just blast away in any event!  I also gave up trying to gain a turn by turn description as “then that tank moved 4 inches, turning its turret and loaded a shell” is not very interesting.  So I will say that I was brewed up on turn 2 and a Russian shortly thereafter. Wow, it can happen, just not often…
I had us come in again at a random position in a couple of turns later.

My second 38t sat a few turns at the table edge, firing away ineffectually at a T-34 in the town a couple of obstructions away (meaning aiming is harder)  and l loudly declared that I uncharacteristically am not rolling the 1s I should be with a fast tank and all.  Well OF COURSE the next initiative I now roll FOUR 1s and a ‘Wild’ dice…so off I raced having the most fun racking up the inches. HOWEVER, I ran out of distance while in the middle of the town not quite having the angle to hit a Russian Valentine in the rear and now having that T-34 in my rear! Oops, bad tactics.

But with the dice being as they are I managed to back up thereby gaining the T-34 in my sights as it had moved out from behind the building to put a shot into me but unable to fire.  I too, not able so we finally move to positions opposite a snow-covered fence.

With after an extended dinner break and near end of the session time, the game dissolved but at least we had a couple of brew ups.  Early war tanks, it was concluded, may get the 1 or 2 dice difference in strike vs armour throws to reduce the enemy’s effectiveness bit-by-bit but hard (not impossible but hard) to get the 3 dice difference with only 4 or 5 dice thrown needed for immediate kills compared to large volume of dice which are rolled in late war tanks.

But nice to finally have all the snow covered terrain and white-washed tanks on the table.


I looked upon some lone “dead” sprues and noted the regularity of the tabs (the round bits that stick out from the frame). Like for use as the bases of fence posts. Very thin fence posts of course.  More like thin metal spikes really.  Well, if I use thin plastic rod, drilled in a bit to make them stronger bond, I could use wire to make “barbed wire” emplacements. Hmm.

Do I need these defences?  Not now but that lack of need has never stopped me from creating a bit of terrain piece before….so I set about.  The two sprues were divided into even frames for which I cut from hardboard 4 similar bases. The holes drilled and rods glued in.  The frames were covered in cheap self-hardening clay.  While I intended to just paint the grey clay an earthy color (aka WW1 mud and all) and just flock the edges (to blend it into the tabletop), the cheap stuff cracked a lot so I was forced to put on a glue layer to prevent more cracking later and cover these crevices with flocking.

My wiring quickly had the rods snap off as they were unequal to the strain of the looping.  So much for that idea.  But then I remembered purchasing some flexible “barbed” wire at the LFGS.
I decided upon a diameter based on a 28mm figure and made tight curls using a lip balm container (!)  which had the correct measurement.

I placed the curls carefully over the rods (painted a metal color) but had not the need to attach. They lay there and could be employed for other tasks if needed.

I suppose I should really paint the wire a steel or metal color and add rust effects for 'realism' but the shiny wire has the new and dangerous look to it!

… of course now I am thinking to scrounge around for more dead sprues - of appropriate requirements - to create more of these defensive positions.
Posted by DougH at 20:57 4 comments:
Labels: modelling, terrain
Newer Posts Older Posts Home
Subscribe to: Posts (Atom)