Up to now I have always had plenty of time to engage in my favourite hobby, but with the recent employment at a 9-5 job, my wargaming time has significantly decreased.  As my dearth of posts recently can attest, it is certainly a time killer.  “Try to do any with that AND three kids!” was the retort from a couple of my wargamer friends!

Anyway, as a last, before Christmas game, I hosted a colonial British Afghan expedition to supply cattle to a far outpost.  Using my “veteran” (painted c.1987) Ral Partha ‘true 25s’,   I had all six of the players play on the same side, while I would control the natives via “auto-pilot” chart and hidden deployment. 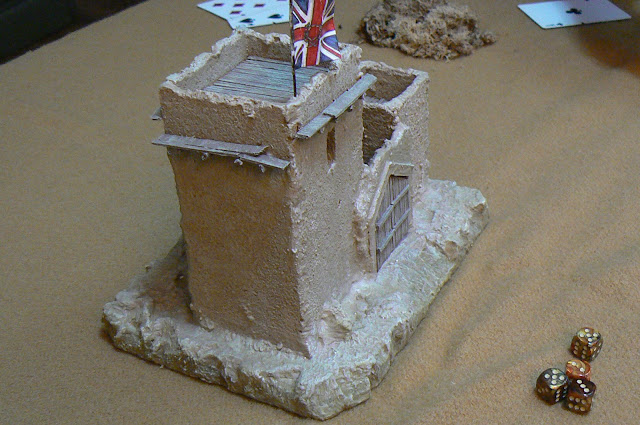 In a rare cooperative method the gents allocated troops and deployment sharing an overall plan.  Sort of countering this, I also added my patented card sequence which uses a sequencing hierarchy to have the players move, should they choose, before others.  Some used this, others just flipped over the next card they had, but this together with the rules (The Men Who Would Be Kings - TMWWBK) ensured a lack of foreknowledge of who-moves-next.
The terrain was largely unknown to the players - but of course they had the 2,000+ feet of elevation advantage standing around the table,  the normal “does this give me cover?” was necessarily indicated.
My collection is a bit on the small side, but with no way of adding to, I went with dividing all the units into six figures (8 for the natives) using the half-size option and increasing the speed and decreasing the shooting hits to offset.  So with that, and the usual poor shooting of the warriors under my diced control, the overall casualties were light (perhaps more realistic than the normal for most wargaming huge casualty numbers?)

We still employed the rule’s activation which had the effect of the metal soldiers acting more prudently than their erst while commanders who might wish them to advance across open ground to “check out the unoccupied village” but the unit quite unwilling to move from their cover….

It came as no surprise to the colonials that as they neared their destination, the inviting British Regimental flag (they could not have seen the blood smears) was taken down and replaced by a horde of tribal warriors.  These were largely dealt with by rifle fire from the near by rocky knoll (and my usual very poor dice rolling for the apparently inept locals).  Throughout the affair I would regularly roll low - a string of four 1s at one point - so the tribal warriors seemed to have little heart in fighting and would rather withdraw than to engage, but much to the relief of the Colonial players.
The mule-borne mountain gun was however finally set up and after fighting off three (!) separate attacks of the half-hearted natives (my dice rolling in full evidence here) to finally put in two blasts to knock down the gate.  With the fort retaken and the cattle still safe, the players rejoiced in their victory.
….then put on their coats and went out into the rain for home…..