A long time ago a local distributor brought in Alternative Armies 'Flintloque' fantasy Napoleonic-based figures which are very loosely scaled at about 35mm or so.
They are full of outrageous character and so I took the less fantasy (no Toads or Dogs for me) and trimmed the orc tusks and elf ears so they are now roughly human in design and organized them into recognizable historical unit - or as close as possible.


They have been stored away for some time (read: years!) but a couple of months ago I brought out the remaining few units and completed the collections, now numbering 200 or so.  Yesterday was the test of the new and very simple rules developed over some time (read: minutes!) I used as much random selection of table position, unit selection, scenario task and to keep it as even as possible because the usual Monday Night guys like to whine about everything!

Other than a couple of minor changes, the rules I made up which are all of 2 pages long (!) were generally accepted and thought to do the trick for a fun convention game.

As an example of the play, playing cards selected poker style by each player dictates who has first action during a phase.  Doug's Handy Card System has the player select one of the cards dealt to him with Diamonds bettering Hearts bettering Clubs bettering Spades with ace high.  With the better card each player in turn can perform an action - shoot, reload, move etc.  The shooting is a hit with a good die and flip a card.  Face card = killed.  No wounds. Hand to hand combat is similar.  Points are given for the random scenario objective a player was given and for any kills he achieved.  That's about it actually.

I am hoping for more players next time which should make the action even more wooly.....

The Battle of Ligny was a major battle of the 100 Days/Waterloo Campaign of 1815 between Napoleon's Armee d'Nord and Blucher's Prussians.  Fought at the same time as the better known Battle of Quatre Bras (trans: "four-arms" or crossroad) no doubt due to the British participation.

Having played the game five or six times now, these photos I found were archived from much earlier in the year.  I don't remember if they were 'published' yet, but I find the battle is fascinating and learned much from the re-creation on the tabletop. 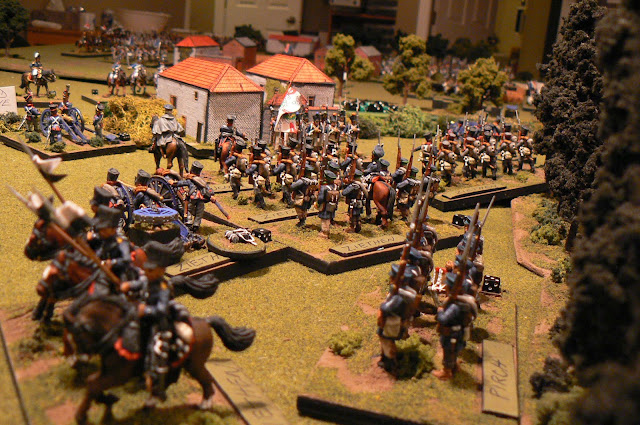 Blucher needed to hold the left flank of the British-Allied army and understood, well, perhaps his Chief-of Staff understood.... that the crossroads would be a key to the French advance as so needed to hold at Ligny.  His dispositions reflected the defensive stance as the small but marshy Ligny stream afforded a nice line.  But that line was also convex and thus would allow the French artillery to converge fire upon the Prussian reserves.  In our games, much of the Prussian losses came from this fire.

However the French still needed to take the towns along the stream as these afforded the only passage across.  The village of Ligny was the largest of these hamlets.

The eastern half of the battle, historically, had little fighting.  It became obvious during the previous playtests, that the 'Grouchy' player, commanding the French forces of mostly cavalry could not assault the eastern most villages and the Prussian player was not willing to abandon his nice defensive positions to move out to the open ground to be attacked by the French horse.  Stalemate.  In this game, I did not portray this side of the battle as it is but boring for those commanders.

To be honest I can not remember which side won the game, but it is hard slog for both sides and, as in history, affairs can be influenced by the smallest of events. A few more good dice than the other side and enemy units collapse and victory achieved.
Posted by DougH at 15:26 No comments:
Labels: Historical Battles, hosted games, Napoleonics, Prussians, Waterloo Project

Without much time to do these things at home, but time to "expend" while waiting for charter trip returns, what can a hard-core wargamer to do but use the time for those fun scratch-build projects.  In this case I had some model 28mm scale swine to keep penned.  For skirmish games, the pigs could be the objective prize.  Or for the larger games, some eye-candy in the corner of the table. 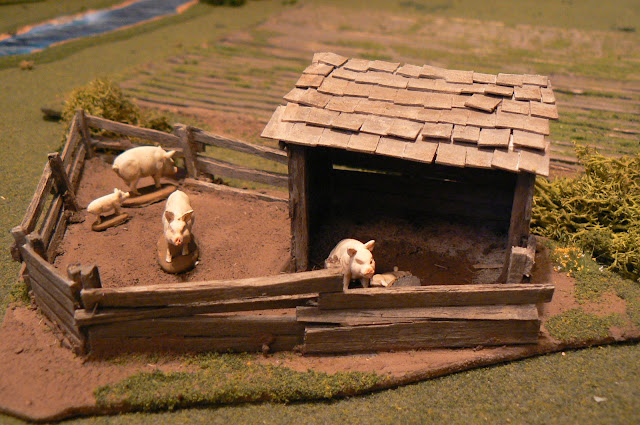 I started with a scrap piece of hardboard and very haphazardly roughly cut wood stir sticks and balsa pieces not caring a bit about lengths or neatness.  A very, poor peasantry, thing.  The ramshackle  construction was certainly helped by the cramped conditions in which I worked while sitting within the school bus.  My hand would inevitably knock over the part of the fence already done and damage that part while then dislodging the newer part.  Argh.  But all part of "the look"..... if that look is to be shoddy, of course.

The shingles are individual pieces of cereal box card and roughly ordered on the roof, but the one which was very misaligned was left as is.  Again, the old and worn effect in play. 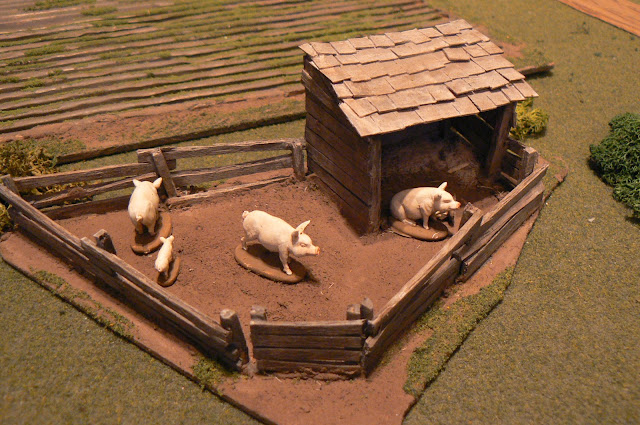 Once all dry, the next day, an hour or so of painting (lots of surface area which takes more time than one would think) with a worn-look dry brush of "old wood" and a quick stain wash to tone down the 'dusty' dry brush.   The putty muddy earth and a bit of wood shavings in the shed, finished the model.

Another of my forays into the bottom-most boxes revealed my good 'ol Monitor model of the famous ACW ironclad.  The model is some 10" long made very simply from foam core and a plastic lid for the turret; a straw for the funnel and painted black and crudely drawn iron plates using a pencil.

The intent was to make several of these size of ships for games but so far have failed to do so. While I like the naval aspect,  I really never seem to play it. 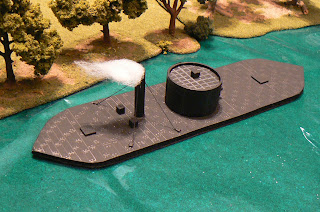