Long story short; I have been tasked to provide the battle narrative for an ongoing Napoleonic campaign - in other words, play out the battles with miniatures.

The Anglo-Portuguese commander wants the bridge destroyed, the French commander expects to deploy north of the town getting there via the bridge over the Druro River as part of a larger Peninsular War fictional battle.

Not really having the ‘proper’ troops for this engagement, I went small scale by using my ~40mm Flintloque figures to play out this portion of the battle as a very minor skirmish.

I gave the French two fine “companies” of infantry to approach the bridge while the British Engineers prepare to blow it up.  Each turn the Engineers roll a d6 until 16 is reached and it will be wired for detonation (and upon a die roll, of course!)

Defending the Engineers are a ‘company’ of the 9th Foot of the 5th Division. While a veteran regiment, the Captain is a martinet hated by the ranks. (a bad roll for his ‘personality’)  Alone in an isolated village away from the army commanded by an officer who had no idea what he was doing, with the temptation for loot and discovery of drink it was too much for the soldiers who, despite the efforts of their sergeant, left their post by degrees.  However the captain, excited by his first meeting of the Napoleon’s army (he had purchased his position and had absolutely no military experience), did not realize about the desertions.

However some defence of the town came from a small band of Guerrillas defending their homes who were of sterner stuff and fired upon the first company of French halting them and mortally wounding their officer.  This confident action (rolling 12(!) for activation) and subsequent roll of 6, activated a small contingent of Portuguese.

Meanwhile, as the French advanced, the 9th’s Captain marvelled at the French Colonel’s uniform and his flowing hair astride his charger galloping on the bridge in the glory of war. “Fire!” he yelled.  The loud percussion he expected was met with silence.

“Now, sir?” was the only sound. The single trooper left with him looked up from his knelling position in a questioning frown. 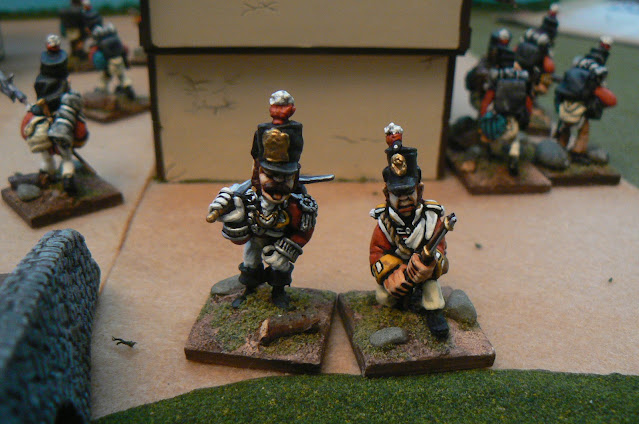 The Guerrillas switched focus to the stagnant first company to the company lead by the mounted officer, but these French did not react to the resulting casualties. Ensconced behind a shielding wall, the raw soldiers of Portuguese remained in place and unwilling to engage in gunfire. But the large Engineer sergeant, a huge Irishman, declared to the oncoming French officer, “You be not stopping us you Froggie bastard!” and using a rusted shovel as a club, engaged with the Frenchman.  Seeing the following French soldiers, he looked over his shoulder and exclaimed, “Work faster!” to his fellow engineers.(my dice rolls were good but still 1 short!)

Alas, his heroism was in vain, the horse evaded the shovel and a well-placed sabre met his brains. A following French soldier toppled an engineer into the water below and another used his hanger blade to cut the cords to the barrels of artillery powder suspended under the bridge. The Guerrillas and Portuguese then melted away.

Of course this story will never make it into the history books.  All that may indeed be mentioned is…the French IV Corps, 1st Division crossed over the Druro and deployed north of Trabazos….

No ordinary evening, WaT with The Wife!

I sputtered, bits of food came out of the mouth, my jaw remained slack, my brain unable to compute. I just stared at her in numb confusion.

“Yes, really” she merely confirmed.  “But something simple.  I don’t want to spend the entire night for you setting it up.”, she said with a grin.

The rest of the meal, I was trying to think of simple rules, simple scenario, easy set up. After finally settling on the game and stating so, she says,”Perhaps What a Tanker?”  I had not even thought of THAT one!  Brilliant suggestion. I then had an inner voice debate on how the heck she came up with that.  I thought she never listened to me as I rambled on……

Dishes cleared, I put down my ashen snow mat and a couple of terrain pieces on the table.  “Dictatorial Fascist German or Dictatorial Communist Russian?”, I ask her.  So I brought out a nice Pzkw III for her, and a rather poorer T-26 for myself.

To compensate for her confusion about which dice are for which action, her dice rolling was very good as each turn’s rolls usually had a good combination including the always useful ‘6’ Wild.   While a bit frustrated with the jargon (“Two d six? You just said I need a seven!”)  she began to be more tactically aggressive. “Yes, I want to shoot you from the flank.  Better yes?” she would state.  “But if you do not roll high enough to reach that position, you will need to turn your Wild to a Move dice thereby not able to change it into a Reload for another shot at me”, I dutifully explain. “I will do it anyway”, she firmly confirms as she then rolls 11 on the dice gaining the position easily; fires her two shots into my side causing my Command Dice to run out and thus my crew legs it, abandoning the shot ridden Russian hunk of junk.

Purist historical players specially followers of Napoleonics, ACW, War of 1812, English Civil War, …well, all except perhaps those for the love of anything Roman, please look away now as I introduce my second only fantasy army…converted skeletons.

Frankly, the only fantasy army I can really tolerate are skeletons; probably because they are still human, albeit without flesh.  (Yes, yes, so some may consider zombies, but have they not essentially become a different species?? And they are more apocalyptic than classic fantasy anyway) 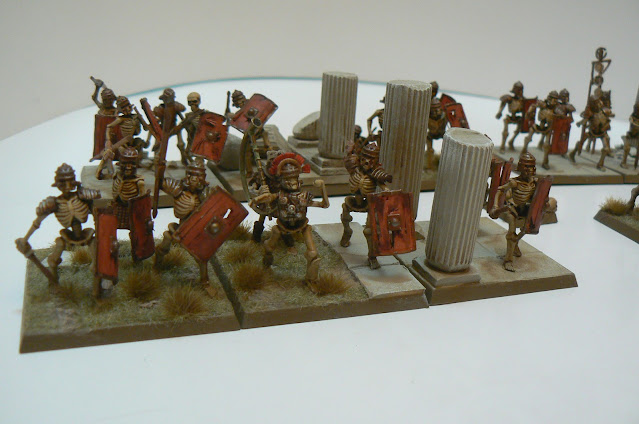 Sitting in a box for years has been a Warlord plastic Early Imperial Roman collection together with accompanying Foundry metals (nice match those), but having already seven other Roman armies which I don’t play with, so it sat. 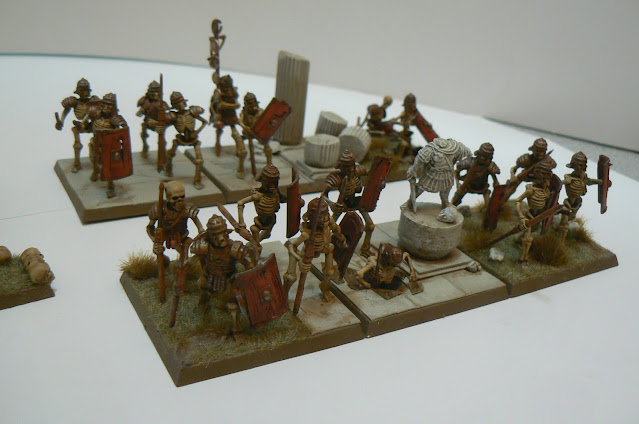 The idea started thumbing through an old war-game magazine had an article on “Broken Legions” showing skeleton/zombie Romans which looked interesting.  I had just a couple of old skeletons of unknown providence which were made as a ballista crew for fun. (see  previous post) 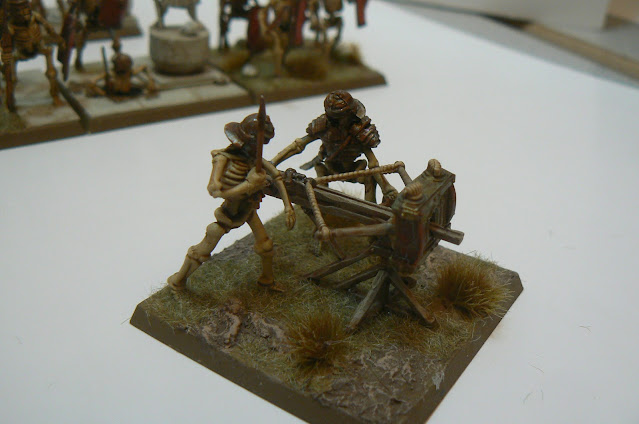 Anyway, one thought leads to another and so sorted through the box of plastics and metals to divide between those who should go to perhaps (??) a new “Infamy, Infamy” Roman army and those plastic types I could “sacrifice” for conversion into skeletons and for their equipment.

Careful counts were made to insure I had enough shields and heads (!) for the I,I Romans should I do those later.

New Wargames Atlantic Skeletons were selected for the fantasy Romans (*)

I suppose with Jason and the Argonauts old movie skeleton scene in my head (see: short YouTube  ) with the remaining pile I went to work carving, gouging, removing, adding… 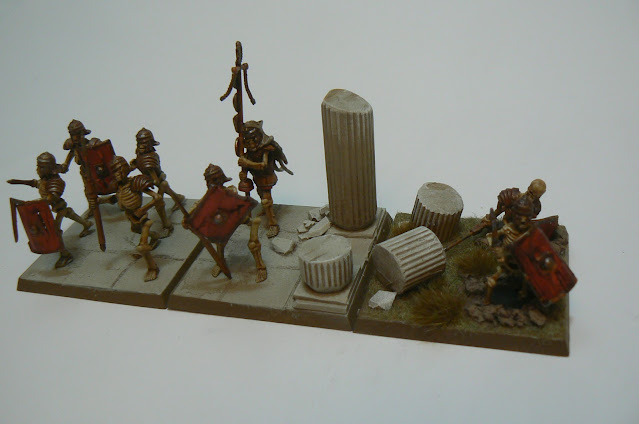 Used old wood dowels I had around for years to create a ruined temple.  Originally made for just one of the units but liked it so much I spread the wealth so having each unit have a bit of temple for its bases.  I found I could stretch the numbers a bit for a fourth unit.  Running out of dowel pieces for columns, I made "more temple" with a spare metal Foundry Roman officer becoming a statue atop a cork stopper with its head toppled to the ground.  ( …return of the Legions after the fall of Empire?…)

The emerging legionaries is again inspired by the movie scene.  The four units are supported by a battery of ballista.  Surprisingly had two more ballista in metal in the box thus the other army has enough and so could use all the plastics for this contingent.

As is becoming usual with my recent endeavours,  no idea when I might employ this new army, but, and while my wife hates this expression, it is not the destination but the journey is the true purpose of life’s travels. I had much fun (and time!) doing up this collection. However the more I look at it the less skellie and more Roman it becomes. 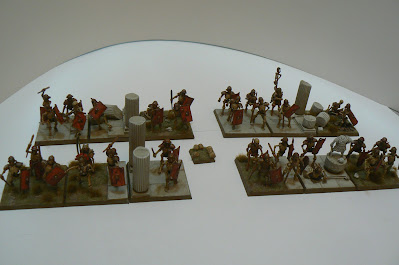 (*) Timing is everything.  I mentioned my interest in this to my buddy WillB, who offered a bunch of half-done Warlord plastic types (nee-Wargames Factory) but then immediately thereafter the LFGS contacted me that the long awaited product ‘I ordered’ finally came in.  The two brands I consider not compatible so WillB’s have become medieval versions some with new 12th Century helmets/heads attached to be done later. A more traditional skeletal force to be sure.

( Although two of the emerging legionaries are indeed originally his creations as he was inspired by the movie and lead me in that direction.)