Of Sprues and Men

The local hobby store [Imperial Hobbies, Richmond, BC, Canada) had its annual "Customer Appreciation Sale" with 25% off (being in business for -you guessed it- 25 years) and thus like a kid with a new $10 bill to spend for the candy, I went a bit crazy and picked up more plastics for my Napoleonic project.

I bought two more Prussian Infantry boxes.  Over doing it for the 1814 battles I had in mind, but Plancenoit (action during the Battle of Waterloo) is now doable!

I also could not resist picking up a box of Victrix French Guard which, along with the sale price, had an old price sticker on it. Woo hoo! My new Young Guard!  All be it with Perry heads rather than bearskins being the lesser guard types. But all in the practical greatcoat....

I read my good friend's latest blog entry (link: Kevin's blog) about his foray into constructing plastics and was amused at some of the same problems I encounter.  But I also noticed some differences.
Perhaps it is my Virgo-ness coming through (Virgos are apparently eminently practical and pragmatic*) but I took a somewhat methodical approach to clipping out each pose separately and placing them into empty blister trays (never throw those away!) and then going on to the next. I also placed all the arms into container trays along with the sprue tab with the code number so I could find them quickly.  Thus the whole procedure should have been quick. However....

...well, Victrix being Victrix with all the arms separate and to a large extent interchangable, one can start really individualizing each figure.  The box has both marching and standing firing/loading poses and so must be separated.  As I have but 10 figures to a stand/unit (I actually planned it this way to take advantage of the configuration of the boxes of plastics) it came out to 6 units or the entire box of 60 figures - if one is OK with putting only 2 various command figures for each unit.


Thus, the whole glueing procedure is quite time consuming.  Fun - in a wargamer demented way - but consuming.  With lots of swearing.  But that just might be me.

As I write this evening, I have still have the packs to glue so they are not yet done.


[* my wife scoffs at this suggestion as NO wargamer can be so described <grin>]
Posted by DougH at 23:58 1 comment:
Labels: blogging, modelling, Plastics

Here is the repainted Hessian artillery piece which I finally decided to repaint.  The decision was wholly based upon the previous paint job which I did not think entirely satisfactory (not that the repaint is much better!) 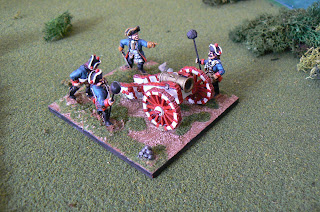 However the lack of my enthusiasm for the, to my eyes, the outrageous colour scheme finally settles my internal debate whether I will want to continue to collect that Landknecht army with their clashing colours and such.   I guess the answer would be no.

The piece and the crew are by Front Rank.  Their gun models are very substantial and especially this howitzer!  I drybrushed a bit of gunmetal on the wheels to indicate wear.  But overall the painting is poor as I could not manipulate the model too much as to do so would pour even more loose flocking into the paint!  I actually think this is the third repaint the poor model has sustained.

Hesse-Kessel gun color of the SYW

So I am paddling through the Net, looking for neat things of wargaming or military history and I come across this well researched blog on ordinance of the Seven Years War.  http://crogges7ywarmies.blogspot.ca/

and the entry about the Hessian artillery is interesting if not aggravating.
LINK 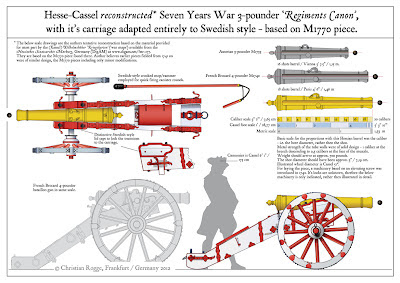 Why aggravating?  Well, if to be historically accurate, I will need to not only repaint my cannon (a difficult proposal as they are glued to terrained bases), but I must paint them in white and red!  The colour scheme seems very gaudy to these 21st century eyes.
With much else to paint, do I go back and spend some time on this?  Hmm.

White and red?!
Yes, yes, the ducal colours and all that. But really.  Tough colours to paint at the best of times......

Posted by DougH at 21:26 No comments:
Labels: blogging, equipment, SYW

While viewing an old memory card, I rediscovered photos of the Seven Years War 28mm battle I hosted back in March at the local convention.  I used my  Hanoverians, Brunswickers, and Hessian-Kessel forces I have painted for this  fictional battle between these historical allies as I have yet to paint their French opponents! 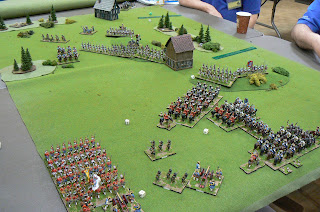 To be honest the game was dropped from my mind as it was a quite the dud.  My scenario was a poor one it turned out, and the scenario then lent to a type of play which did not suit the simple type that my home-brew rules could account for as they had done in the past.  I perhaps made the error in informing one of the players that the rules were based on a DBA-ish attitude, and so he, experienced with DBA, then proceeded to play the units as in that rule set and doing pirouets and 'manoeuvres' , while OK for DBA, were not really in my rules concept or accounted for.  Thus the game was halted many times for "considered conversation", gentlemanly as it were, about 'correct tactics' and changes required et al.  Not a really good experience I will admit for everyone and for which I apologize.  I still love my collection but the game had me quickly going on with other projects.  My poor French, equal in size or more to the Germans on the table will have to wait some more (already 15+ years of being primered!) to await the painting table......

Mark, a wargaming buddy of mine, wants to do some American dismounted dragoons for the War of 1812 Battle of Sackett's Harbor.  No one does these and so he will attempt to create some from the Perry Napoleonic French version.  With this he asked "How do the mounted OG & Perry Dragoons compare size-wise?  Any idea? Are they acceptable if kept in the same unit?"

I will let the attached photo demonstrate that the Perrys are much larger; especially their cavalry.  And correctly so IMHO.  Most metal versions of horses, and this is particularly true of OG, are horrible examples of the species.  However as a grouping I guess they do the trick but cannot be mixed with many other manufacturers.

As the OG horses are quite short in stature, the dismounted Perry dragoons are  quite tall in comparison.  But they would be separate units.

The photo - rather poor rushed as it was to provide him with a quick answer- is from table view and the figures are at an even level.  The figure on the right is a French General I built from a cuirassier but the horse would be the same as their French dragoon version and the dragoon riders would be the same size.
Posted by DougH at 15:23 2 comments:
Labels: minis
Newer Posts Older Posts Home
Subscribe to: Posts (Atom)