The new job is very much a time-killer.  Now perhaps certainly, ALL careers take one away from the more important wargaming tasks, and I, up till now, have been fortunate to avoid most of that, but now finding that my wargame 'projects' take a lot longer to complete.

There is much "downtime" between drop off and pick up of the bus charters, which can be very boring even with a good book to read; and I miss the wargaming work so I have made it possible to take painting or modelling, to work on during this time.  Not very conducive for detailed painting scrunched as one is required to be, sitting on the bench seats, but I can get 'the basics' done those large surface areas of a miniature - the pants, tunic, spears, cloaks and the like.  Sometimes even more detailed parts can be done.  Depends upon the sculpting of the figure.  And occasionally a whole unit can be completed.  Or even a whole force.  Such was this "army" of Chaos warriors. 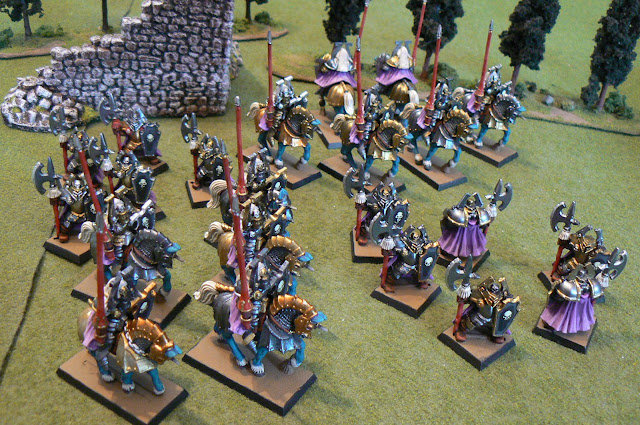 The figures are from an old game of BattleMasters.  I bought boxes of them as it was on sale at Toy R Us years ago and I thought it was a good deal. Hmm. Anyway, it was good vs evil.  The good was sorta Renaissance era which I made into a large force ( link ) and much of the evil types I sold, but for whatever reason I retained these. It happened that I had enough to have enough models ( and points ) for a Dragon Rampant force. *  With a need to fill time per mentioned above,  I brought along all the metallic colours I have so to vary the look of these identical models. 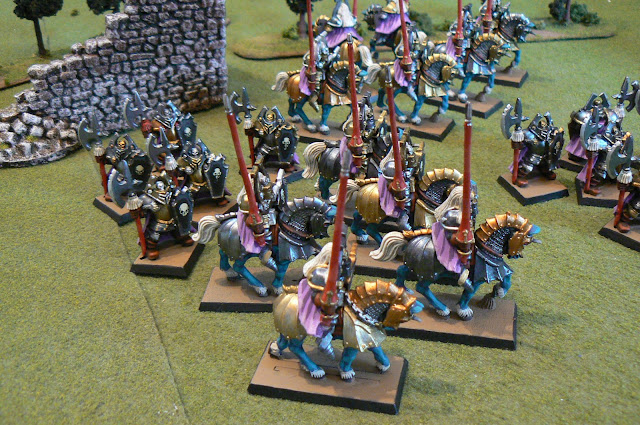 I hate painting horses - although they look fine once done.  But for this force - being fantasy and all - I used a blue for the hide and cream for the tail (mimicked on the helmet and spear fringes) and with a natural horn from the front of the head [ this latter appendage is a metal spike but I like the unicorn idea! ] Only after completing the painting did I think the colour scheme I chose has a definite Smurf look, but let us just overlook that shall we......these are imaginary 'Tekoins'! 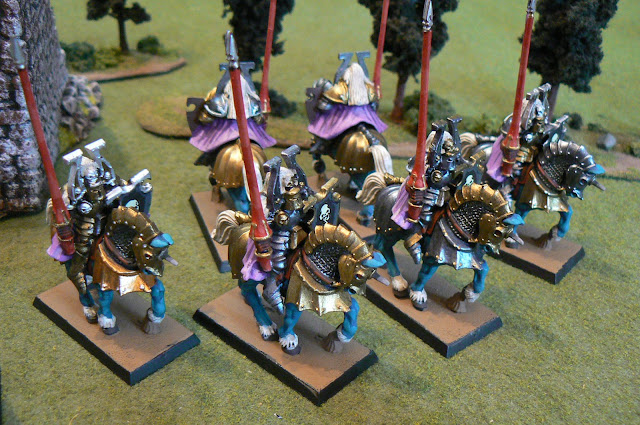 * the more mathematically astute readers might have counted only 11 models of both mounted and foot types thus coming 1 short of the required amount.  Obviously one of the two groups of each type will be only 5 strong.  Oh my, total chaos!! However I am sure myself and my opponent will remember to note the first casualty of the game - grin -
Posted by DougH at 20:23 4 comments:
Labels: "Lion Rampant", Fantasy, minis, musings, the silly side
Newer Posts Older Posts Home
Subscribe to: Posts (Atom)