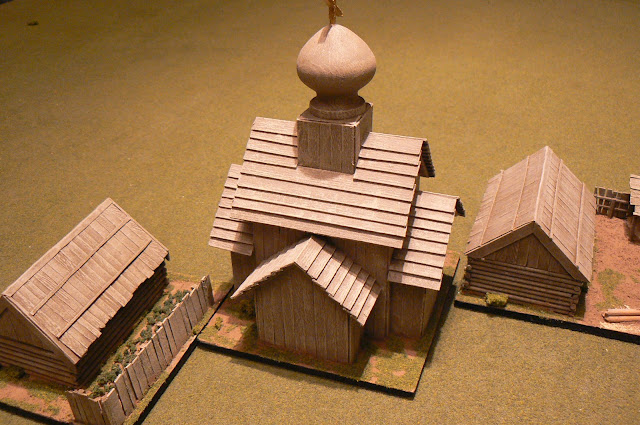 I wanted to have a Russian church to match the meagre village houses I previously made and finally found an design example which could fit upon the small bases I require.  So unlike the previous MDF buildings I started with a foamcore frame.  Took an evening (Ok to be honest, a very long evening and into the early morning) to finish the structure and wood walls. 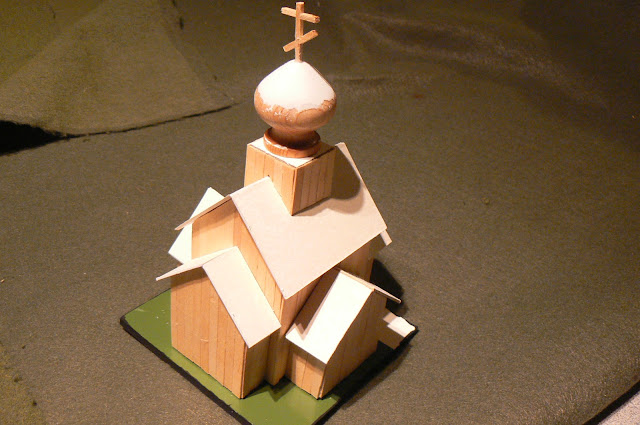 The onion dome is the quintessential look of the Russian Orthodox church.  Mine is a wooden drawer knob taken from a cabinet. (Geez, I hope the wife doesn’t notice!). The dome shape was built up with a bit of harden clay holding a makeshift balsa wood cross.

Overheard during a wargame:

"A quick game is a good game. Done, over, get over to the pub for beer and talk about it for three hours."


Now being what might be described as a ‘veteran wargamer’ I still carry the old thinking that one has no other option than to scratch-build most or all of the required terrain for the painted toy soldiers to play within as we had to do decades ago.  But the proliferation of MDF building packs has eliminated the requirement to start making model buildings from the framing onward.  Heck most MDF models are even ‘pre-painted’ allowing the wargamer to quickly build and simply place on the table, yet  some are still very basic indeed.  I found a pack of these during the local hobby store’s sales and while still expensive compared to what you get I still purchased deciding I could enhance these.


Now when I say basic, it is very basic and the purchaser must do much to make it even look the part.  The door is just a laser cut of the wall as are the windows.  The frames of those do have some nice decoration (most incongruent given the simplistic bareness of the model).
That being said, it IS an empty canvas as the saying goes, and so I could pencil on the outlines of the support beams and make it look like the ‘pimped-up’ 4Ground Tutor style building I created recently as can be seen in the first photo.

Here is the before and after shots:


I included railroad plastic windows, rearranged the door to be shifted back into the model and gave it a thin card (cereal box) tiled roof.  The woodwork and cracked lines are merely painted on.
So really, it is mostly scratch-build with only the MDF forming a sturdy and squared frame to utilize.

Using the experience from the first of the two identical models in the package, with the second I have drawn a different pattern of support beams and will probably put a thatch roof to vary the look. 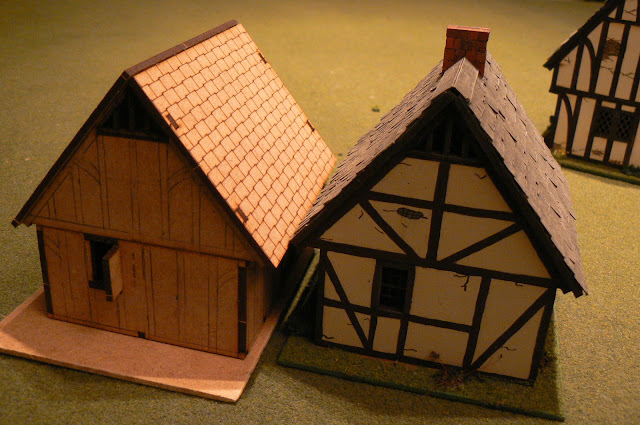 
An aside:
Heard a conversation at the club.  The one member asked the other "Why don't more members go to the Annual General Meeting?"  "Probably", suggests the other, "they don't want to risk the chance they might be elected to the Board."

The Engagement at Bombuko Mission House

JimF offered to host at the Trumpeter’s club’s monthly GameNight to have his nicely painted Belgian Force Publique vs my French Foreign Legion….

It is your son, the legionnaire ,  writing again about my latest action. Of the preamble, mine is not to reason why, but to do or die; and so we of the Legion are to advance a great distance to a place to gather some gold but it is that our elite but small force must engage a larger for of Force Publique in dense terrain somewhere in Africa.

As we must advance, we brought our new artillery.  The colonel did some “horse trading” and sold the original 75 gun gained with the crew and now is using other model.  The colonel says “it looks better the part”.  Whatever.  It was useful in causing many casualties on the nearest blue clad Belgian askari unit.  But throughout the battle it would be slow to move into position.

To the right, the second company came under long range rifle plus machine gun fire and rapidly were decimated and soon were hor-de-combat. For our part, we also had too many bullets coming our way and loses building.  Only our superior discipline had us still in the fight.

Editor’s Note:  the plus 2 really helps on the dice rolls!

But nevertheless we needed to move into a thicket to offer some protection. All thought of advance quickly forgotten.  Captain Premiermont was extorting us with “Think of France! Think of France! when a bullet struck him down.


Editor’s Note: Yes, once again I rolled double ones for Leader Killed.  But heck with six different rolls of a total of only three on two dice rolled at various times during the game as an indication it was enviable.

The Artillery having ever so slowly moving at only 4 inches a turn, finally engaged far targets and doing some good but the askari to our right were now putting us under heavy fire.  Again, our discipline kept us together, however, with only three of us remaining we were pinned and finally forced to retreat into the open.  The end was nigh.  As I write this last passage I hope tha…….

Jim’s use of rubber terrain pieces and plastic aquarium plants was fairly effective.  The heavy vegetation did not help either side as the dominance of rifles and modern firepower.  The The Men Who Would Be Kings rules are as we came to understand are not designed for two equally modern armed to have a good game.  Well, OK, maybe good for August 1914 in northern France at the start of WW1 when such conditions helped establish the building of trenches.  In that case, as our game demonstrated in the choices during the game made by Jim and myself, advancing is impossible thus doomed and defensive cover required to survive. Long range artillery is needed and more troops required for any attack.  So in many ways this game was very much like the early battles of WW1 when 200,000 casualties occurred in the first month; but a “classical colonial” game is was not.
Posted by DougH at 16:04 5 comments:
Labels: Bonsor games, FFL, fictional battles, TMWWBK
Newer Posts Older Posts Home
Subscribe to: Posts (Atom)