The "Battle of Kurhunne" was the last stand by the Prussian general Mohr to save his army and defend it's evacuation by the British Royal Navy to the North Sea.
Only months earlier, Mohr, in an effort to support the resistance of the German people against the French made a bold move into French held territory but Napoleon brought even some of the Guard to bear down on him ultimately forcing him to retreat.  Although Napoleon was forced to deal with events elsewhere, the French under Soult, forced him to the sea.

This was the scenario background and based on an actual Napoleonic battle albeit not in Germany and did not involve the Prussians . If you have not already guessed, based on my use of homophones, more clues to come!

David came over and I created this rather smaller battle than the much larger one we did last time! See:link

As you might have gathered, the Prussian under my rather dubious command, held to the ridge too long hoping for a repeat of the real battle and force the French into a stalemate. Clue But in the game were ultimately crushed.

Oh, the historical battle? Corunna in Spain early 1809 with the British (nee Prussians) vs, well, the French. Also known as the Battle of Elvina.

Each element representing ~1500 infantry or 800 cavalry

Battle No.2
The same with roles reversed. Even with much discussion about the rules and working out measuring systems, we concluded the game in very good time and so could have another go at it.
You can read David's report here: link
Posted by DougH at 15:59 No comments:
Labels: Napoleonics, Prussians, wargames

Representing Tripp's Dutch-Belgian Heavy Cavalry Brigade during the 100 Days Campaign, I completed 2 of the 3 historical regiments, both in plastic. 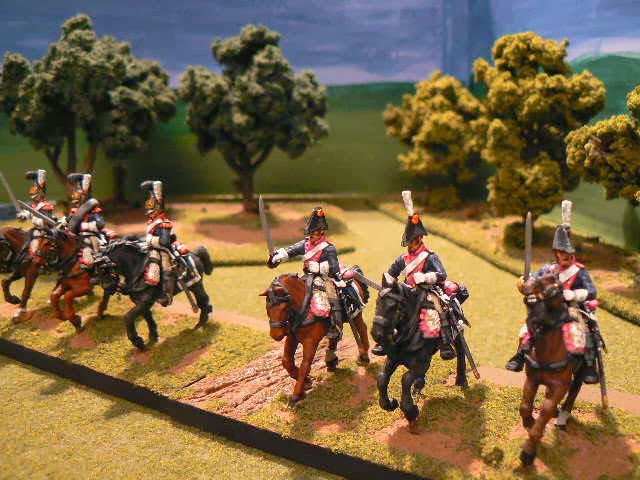 While the Perrys metals are outstanding, I decided I had the extra parts to build these unique units from bits.  The basics of horse, rider and arms are French Dragoon.  The Belgian helmet is a French Carabinier with a plume added and I put on modelling putty to approximate the splendid brass lion badge on the front. The often depicted shoulder roll of the Dutch-Belgian horse I added to one of the riders.  The others did not allow a realistic modelling of roll and I did not think I could quite get the sizing the same in any case. 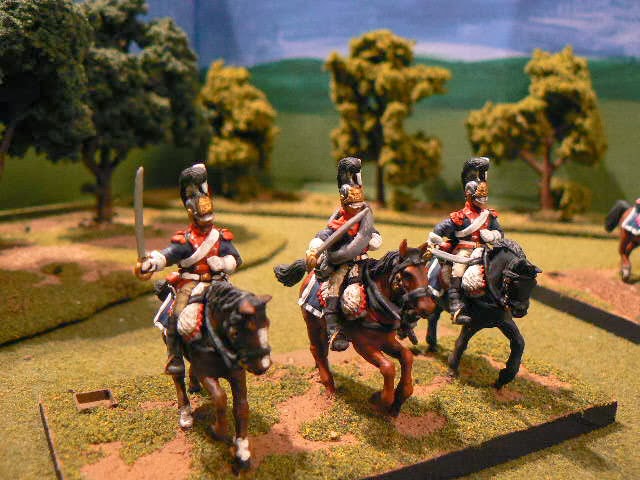 The Dutch regiment has a similar base but uses Austrian officer bicornes, with plumes glued on. I dropped the stand after painting and while all were OK, the one plume went missing. I looked for 10 minutes for the bloody thing and it is still unfound! Never bothered to replace it.  The orange cockade of the Netherlanders was added green stuff. 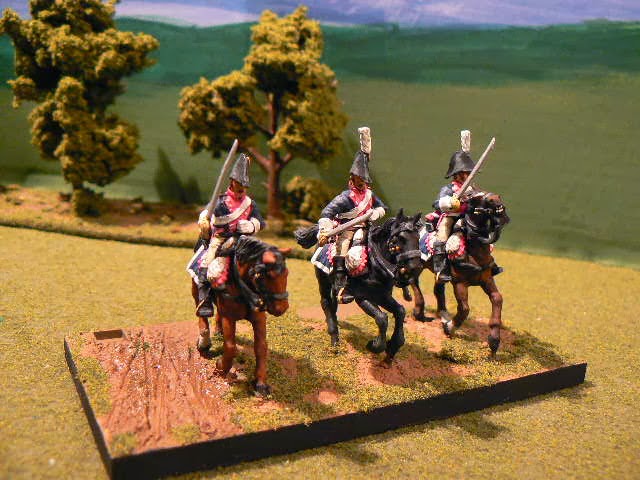 Overheard between two miniatures wargamers: "Those are very nice figures." "Thank you",says the second wargamer, "the new plastics are beautiful aren't they"  "Oh", says the first,"well, for plastics, anyway"

Wargamers seem to have a liking for, or contempt of plastics. Frankly, once sitting on the table, can the difference be seen other than perhaps the better proportions.  While I am not a great fan of the 1:72 scale boys, the hard plastics coming out now by Victrix, Warlord and certainly the current Perry productions offer good value and a great opportunity for the modeler to have, um, fun.

While all the units I have been creating are offered in metal, I want the light weight for transport.  OK I must admit that I have fun creating different units from the bits at hand.  For example the 6th Dutch Hussars I decided to make from the Perry British Hussars. No problem all hussars look the same.  Yeah, OK the equipment is a bit off, but no one will care. I will not have the elegant saddle cloth but hey, this is campaigning is it not?  The covered shako which is often portrayed for this unit, can be from the French bits box, so no worries there.  So as I am gluing the horses together, I notice the 'docked' horse tails!  I forgot the British cavalry still cut off half the tails of their horses.  But the Dutch did not. Oh, darn.  However I remembered I had some plastic fantasy horses and so the cutting and gluing continued. 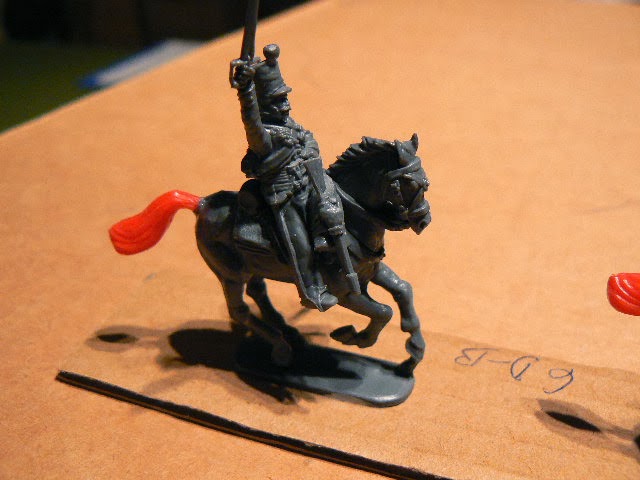 While they look a bit odd now , once primered and painted, they will certainly play the part.

Other particularly interesting mixes are: