Once on roll, I continue to gather figures until…. well I was going to say “until it gets ridiculous”,…. but I often even go beyond that.

With plastics and all the conversion possibilities which I enjoy creating,  I have now have a sizeable force of Napoleonic cavalry to do battle with each other and to fill in when necessary for our bring-what-you-can games.

"Is this not the same village, Francois?"

...."Ah, all these Russian villages look the same in this d*amned snow!" 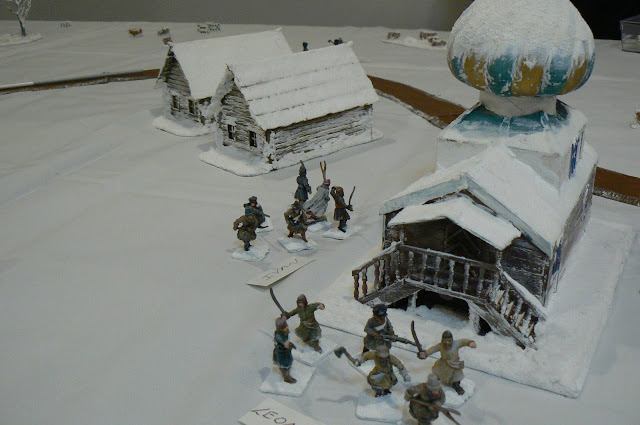 Retreat from Moscow - the game


Well after a vacation to warmer climes, what type of game would you think I would like to do?  Something with steamy jungles? Perhaps an amphibious landing on a nice tropical beach? No, I decide upon the frozen tundra of Russia….. and the famous Retreat from Moscow of the Grande Armee!

To be honest, the vacation had little to do with it.  It really all started with a large white tablecloth I have had for years, and a chance encounter with WillB at the club when he was selling (giving away, really) some of his Perry ‘Retreat’ figures.  I couldn't resist. When I heard that the Seattle convention of “Enfilade!” theme is to be ‘Winter’ , well…….heck.

With my interest, Will later traded with me some further of his Retreat collection…seeing my weakness :}

The Perrys do packs of six foot and three horse, so I choose to continue that organization of units as not to make the whole project overwhelming.  In any rules, you can have various means “stretch out” the elimination of figures/units and I did not see the need for masses on the table.  This game is to be a lonesome party of stragglers in small units seeking a different way home from the mass of the disintegrating French army.

Because of the small numbers, or perhaps because of them, I saw this as another of my “convention games” to be played in a noisy environment by a bunch of guys not necessarily up on any particular rules or even the period at hand.  Certainly I feel overly complicated and ‘accurate simulations’ don’t really work at big events so I opt to simple and easy to command rules.  This often means I will need to make them myself to fit the type of game and the numbers I have.
So, in this case, while the Russians (mainly peasants as that is what I ended up with) could be commanded indeed by other players, it proved interesting putting them on “auto-pilot” by using a chart and basing their ‘commands’ on proximity to the enemy and a die roll to see how they react.

The rules, brief as they were, with myself putting in about a half hour of thought were kinda based on the ideas of Lion Rampant (with low amount activation, differing hits equal casualty amounts and differing abilities).  **spoiler - they proved to work very well indeed.

Of course the other things to create the game are the painting and the terrain.  The painting was necessitated by Will’s units already done.  But this actually proved a blessing because while not my usual style, it gave me inspiration to keep it simple and basic.  Then, from examples of other painters of frozen conditions, dry-brush a light grey over all areas to give them a ‘cold’ look.  Thus unusually for me, I have another’s painting in my collection.

As mentioned the ‘mat’ is a white tablecloth I had.  Not realistic, but practical.  The Russian houses were plastic ‘Pegasus’ types previously painted by me but not to my satisfaction so they were very much “re-purposed” covered in white paint and model snow.  The Russian church I had built a while back (see: my previous post on the church build)  also became “re-purposed” and covered like-wise. Undeveloped x-ray film provided by a doctor gaming-buddy of mine years and years ago (obviously as they are now have been digital for decades) provided the cold water stream.

OK, the game.
Firstly I told Will, Jim and Peter there are no morale rules.  Units can fight on until all the figures are eliminated.  The rational is thus:
“In these frozen winter depths of despair, if you surrender the enemy will certainly kill you.  If you run, it is into the white wilderness.  To give up is to die frozen.  The only option is to keep fighting until the bitter end or continue your trek home….”

Having no morale in the rules, certainly makes everything a whole lot simpler!

While not really ‘morale’ I put in a simple rule that units sustaining the most casualties in combat or any from shooting will retreat back a full move.  That simple rule, ended up to be used tactically by the players to ‘push’ the Russians out of the way in many cases thus shooting but so losing a turn of movement just to clear a better path.

The winner is the player with the most figures off the far end of the table.  Jim, selected the mounted French contingent and the ‘Remnants’ (of the GrandeArmee) .  His cavalry raced literally directly through the countryside so having the terrain potentially causing harm.  But as I was rolling.... and sixes were needed, so he worried unnecessarily….( I think at one point I threw 48 consecutive dice and came up with only three individual 6s and so not enough to wound, let alone eliminate a single figure….)

Jim sat back to watch Peter and Will leap-frog each other, fighting off the peasants and the much tougher Russian Jager regulars.  Yes, the Cossacks were there (of course!) but insisted to but be merely be a presence and only coming into range once to be shot up by Will’s commanded ‘Old Guard’.  Surprisingly to all the players, after initial fears of being slaughtered, Will and Peter exited with the same numbers as Jim so all were considered survivors …until perhaps the next village is encountered!

Some good ideas for further betterment of the rules were offered and so I will go into the next game with Version B and knowledge it will probably work for a good game and entertainment of the players.