The Cavaliers down the High Street 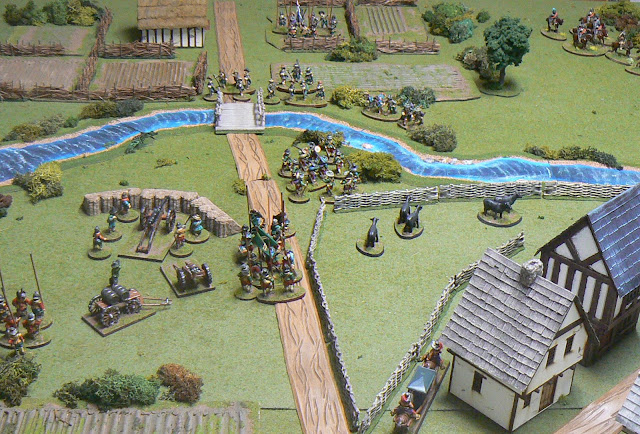 My solo "Tersey River" fictional ECW campaign has made an appearance on the table.  Memorable for the effectiveness of the cannon fire from "Little Maggie" which discouraged the Tawney attack across the bridge of the Tam and the headlong charge by Lord Blare down the highstreet of Carweal village being met with the veteran cavalry of the Murrey faction charging down the street from the opposite direction! 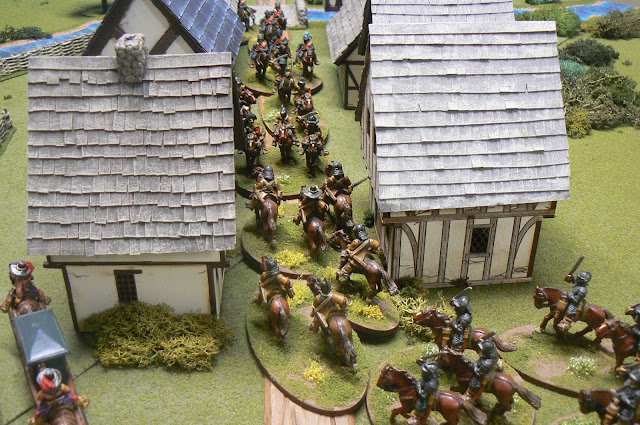 Blare's troopers took the brunt of the force and were forced to halt causing a traffic jam of milling horses within the town and were soon forced to flight.

The ‘birth’ of my new unit of NWMP newly painted last night.

The North-West Mounted Police, were the Canadian Constabulary of the later 19th Century used in modern-day Alberta, Saskatchewan and Manitoba “the Prairie Provinces”.  This is a vast area, some 1,780,000 km2.  For comparison, the UK is 243,000 km2.  The southern area of Saskatchewan, the primary theatre of operations during the North-West Rebellion is approximately the size of modern Germany.  For all this area of patrol, only some 500 officers were employed and so thus the very small contingent for my force made from conversations of the Perry American Civil War plastic cavalrymen.  The dismounted trooper happens to be a Brigade Games Boer with a new plastic Home Service head to represent the mounted infantrymen status of the contingent. 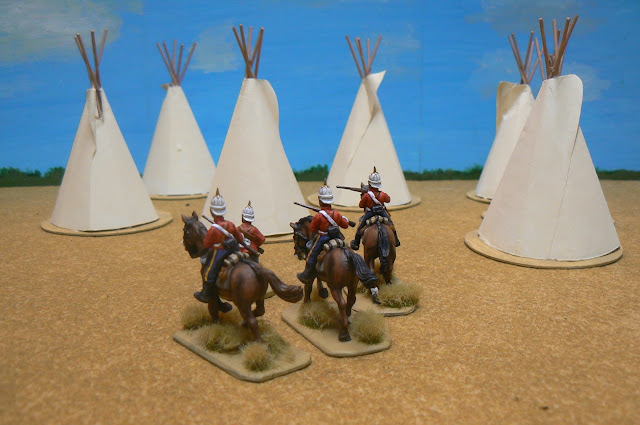 While the historical relationship of the NWMP and the native aboriginal population was generally good, some of the Cree joined the Metis of Louis Riel in conflict with the Canadian government.  Under this guise, I created a very small scenario to use my newly painted NWMP contingent for that campaign and that of the native teepees built during the summer. 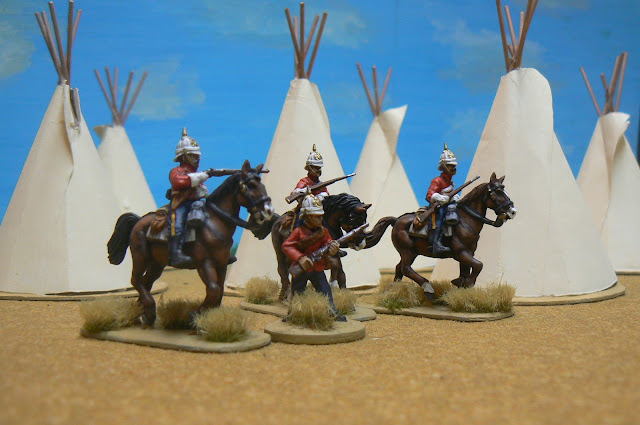 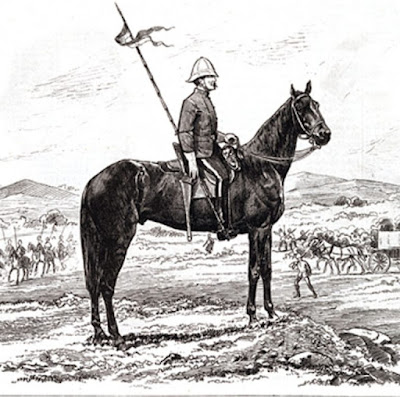 The scenario has the NWMP to determine the belligerent status of the native encampment.  The camp was large with a woods to the south and unknown to the policemen, a slight escarpment in front of the camp.

The Canadians trotted toward the camp with careful view to the small copse of trees to their right. A high-pitched voice was followed by firing, wounding one of the troopers. In the commotion the NWMP were unaware of the firing from the escarpment (no hits from this direction at all, so presumably no effect or reaction from the otherwise involved troopers).

Recovering their motivation (making the pinning test) they moved away from the fire and toward the camp.  More firing came from the woods but to no effect. However the troopers were now startled from the close range fire from the hidden position in front of them, and the same trooper was again hit ( I diced to see which of the three would be hit)  Pinned once again, they waited the Cree reaction but none was forthcoming.  Unbeknown, the Cree were short of ammunition and arrows thus equally unable to continue the fight. (I rolled very low for the amount of shots the Cree could deliver)

But the policemen had their answer about the Cree attitude and decided to quickly retire to report. ( I rolled maximum on the dice for their morale/activation!)