For those who are into the Battle of Borodino ...and those lovers of classic great fiction and epic cinema ....and will no doubt recognize "Pierre" of Bondarchuk's movie "War and Peace" based on Tolstoy's work of historical fiction.  You can certainly find bits of the film on YouTube.

The figure, originally designed for the famous and usual depiction of the British General Picton and previously painted by me as an American militia commander. But I decided it was worth the little bit of effort to repaint him in the white-ish clothes of Bonarchuk's portrayal.

The figure is close to the costume and the addition of bits of tinfoil (!) serves as his spectacles. I created him up just for the humour of it as he observes the Russian forces in action. 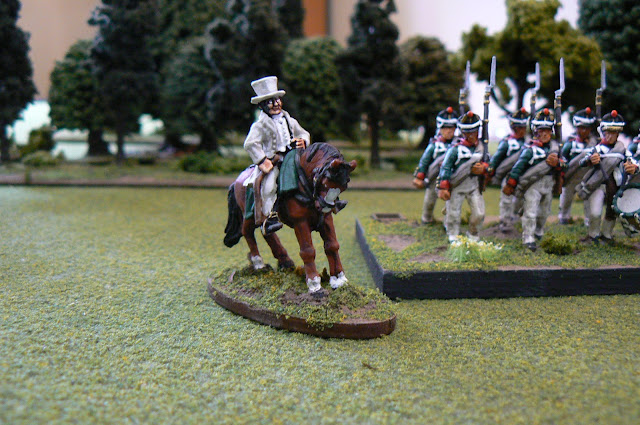 The 5th Army Corps at the Battle of Borodino contained the Russian Guard infantry, much of the Guard heavy cavalry and a division of combined grenadiers.  I decided to forgo the grenadiers and bulk up on the guard infantry (same morale strength in the rules so no advantage) which allowed me to create four of the guard regiments.  The guard regimental uniforms are similar but for the colour of the collars and, in one case, the addition of red lapels. Very cool those but marred to some degree with the right-arm-crossed-over-the-chest-to-hold-the-musket pose of all the Warlord infantry plastics.
Speaking of which, these Warlord Russians have a more goose-stepping marching poses than that of the Perrys. As the two are not that compatible together (see my previous review: link  )  I chose the Warlords to be the separate Guard elements.

Do note the quotation marks around the word 'villages' as indeed they are but one building.  However, for the ground scale we are using, the models play the part.

While the villages of Utitsa and Gorki were not a scene of important fighting during the Battle of Borodino, they will serve during the game the function as victory condition points - the side holding them with the superior gain. The Russians have the initial advantage as these villages are behind their lines and thus the onus is on the French to attack and take them.

The models are simple affairs of a foam-core frame covered in coffee stir sticks and thin dowels.
And yes, for the architect muttering before his computer screen about the lack of certain building necessities, I will mention that no windows or doors were added..... the construction thus so much more simple!!
I will just say that any door must be on the opposite wall .....

Obviously these buildings can be used for any 28mm/20mm game and not too overtly Russian but still historical enough to play the part, I think.
Posted by DougH at 21:31 6 comments:
Labels: Borodino, GdC, Historical Battles, modeling, Napoleonics, Russians

The Russians love to have large amounts of their artillery "in reserve" and never more so than at the Battle of Borodino.  Unfortunately its commander forgot his duty, personally leading an attack and got himself killed, disrupting the whole command structure!

Rather than have model upon model of artillery, unrealistically filling up the tabletop,  I thought a more clever way was to have but one model (for the aesthetics alone you understand) and, as we represent the pips of the dice as a battery, to use dice to represent the many batteries the Russians could use.  The pips of these dice then are decreased as they are "moved" to replace the losses of those artillery stands in the fighting.

The two Russian armies which fought at Borodino had a combined 14 foot batteries and five horse batteries which are represented on the stand.  The Horse Batteries are distinguished on this base by the ammuntion box placed near one of the dice frames. One of the "what-ifs" of the game will be the allowance of all the Russian reserve artillery to be used.

The model is the three-horse ammo cart by Perry Miniatures and, as usual from them, nicely done - once all those little flash tags are removed from the metal pieces, of course (sigh).  I added some metal ropes which I had acquired at some point (when??) but match perfectly with the modelled parts on the horses! 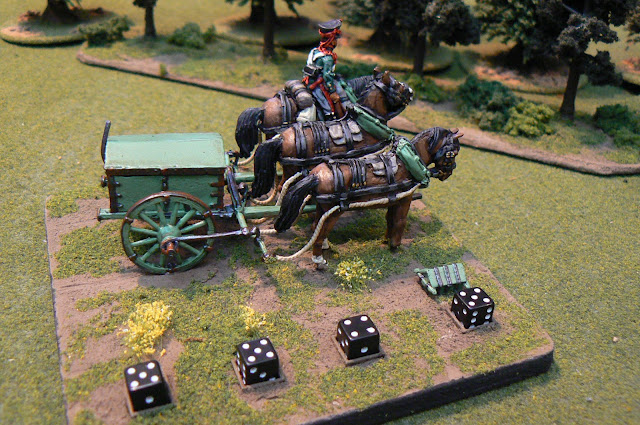 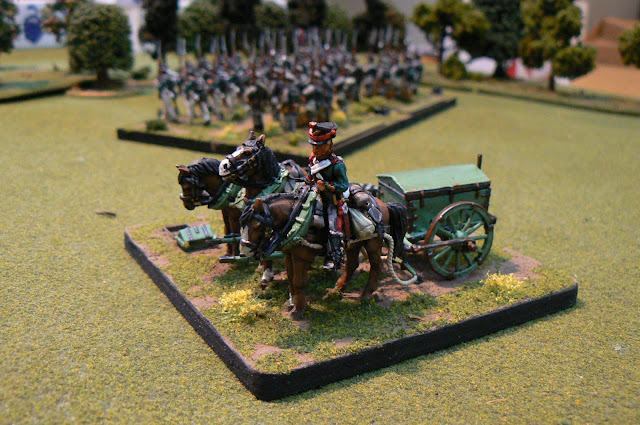 I received my Perry order to complete my Russian contingent. Can't do that without getting some Cossacks, of course. They have lances. Perry supply very nice metal ones however, as we all have encountered,  they have a tendency to get themselves twisted.  I have never liked the wobbly look so have always used straight hard wire.  But I have never thrown away all those lead lances of the past.

While glancing at old wargamer glossies, I came across a photo of game with real twig 'wicker' fences and, well, lightbulb!

So the next day, when doing some 'gluing' of cavalry onto horses using green stuff which is nicely sticky when new and fills in gaps in the seat.  However as usual I overestimated the amount needed.  Rather than to waste, I thought to use some to attach and support stakes on a stick.  After I cut off the lance tips of the newly purposeful malleable metal rods so they can be thread through.

early test:
we shall see how this proceeds in a future effort.
Posted by DougH at 09:31 2 comments:
Labels: green stuff, modelling, musings, terrain

As I had all the set up already prepared, I gave myself two concurrent sessions at the local
"Trumpeter Salute" Convention to replay the 1813 battle having the Prussians (and only Prussians for the most part) under Bulow (without much support from the Russians nor Swedes thanks to his commander Bernadotte) attacking the French and allies under Ney.  Bulow saw his opportunity as Bertrand's corps was isolated on the wrong side of the bridge at the village of Dennewitz. 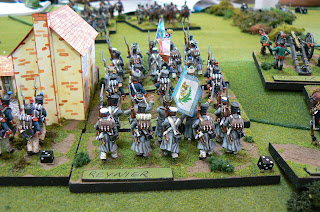 Both JimF and PeterM were veterans of the first try and we were joined by Ken and interestingly by ChuckH who worked with Sam Mustafa play testing his rules Blucher. I wondered how he picked up on my rules so quickly, but apparently they are very similar to that which I and my friends have created at the same time.  The expression 'great minds think alike' comes to mind. I have listened to Sam's interviews and explanations of his rules and heck, yes, very close in concept.

Good then that I can use his campaign ideas! 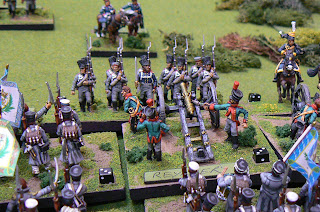 Anyway,  the first go went much like the original game.  The French wisely set up all their artillery on the hills. The Prussians strength reduced by all this iron coming at them did not have the capacity to overwhelm the French line even with the artillery rules changed from the experience of the first game. To prevent "battery sniping" and, unless the player pays command points to order the concentration of fire upon but one target, the player is encouraged to 'spread the wealth' of fire upon multiple targets.  While the artillery did it's job,  the concept seemed to work and will, I think, be a benefit to the Borodino game with the huge amount of artillery available.

The game went well a just took the time available for the first session. The players moved on to the other games they signed up for so wargaming buddy ThomasM a very experienced Napoleonic player offered to take me on for the rest of the evening so I reset the scenario with him taking the Prussians and I in the role of Ney.  With the two games of failed Prussian assaults, I increased their endurance and had Oudinot's command come in later to see if that would create a more historical and even affair.  It did, along with Thomas's good generalmanship. The balance of the battle was close but being midnight (!) and having played for 10 hours (!!) we called it a night.