Out of the vault of miscellaneous photos, I came across this one which was taken sometime in the summer during a round of golf at a local course.

I think you may already know why I have posted this.  Does it not look like a tabletop version of wargaming trees?  Complete with the oval base and completely devoid of underlying vegetation.

Just struck me as interesting that is all. 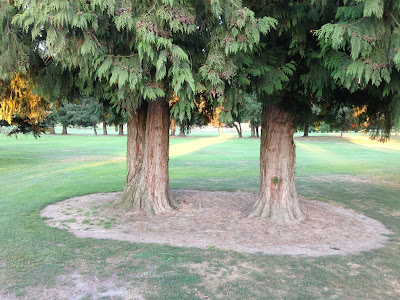 WillB claimed first dibs on hosting at the club's Friday Bonsor game night.  Jim and I offered our long dormant collections to the cause and I also offered to bring some additional terrain pieces.
As it were, he was late in arriving so I spread my desert type mat. This is a Hotz 'Wild West' mat showing roads in a darker colour which we would incorporate by placing walls and buildings in the corners to hide these darker areas; creating "corners" to which we each would place our retinues.  Having arrived, Will offered his very old fantasy catapult as the objective; the winner having moved it off his corner of the table by placing a unit onto and using that unit's move activation to maneuver it.  Only Will finally made an effort at it, as the rest of us were simply attacking each other made interesting as we rolled for allied-manship and had each friendly retinue kitty-corner to each other.

In typical Rampant style, luck, dice and maybe good tactics produced an entertaining game.  You can read more about it at Will's blog ( link ) as I will not bore you with a blow by blow.

On my part, my heavies had apparently armour the quality of tinfoil and swords made of wood.  And my dice rolling...well..... The following photo speaks volumes .....