Oh, this is but one of the multitude of minor squabbles occurring during the Sengoku period of Japanese history - the time of the classic Samurai we all know and game.

Having no idea who will show at host’s Francis’ place, the scenario has to be, well, ‘loose’ to allow for various number of players.  I deployed a triad of forces, with small one in the village to protect the sacred ‘Zen White Stone’ , the other equally matched forces on each side.

Being a Lion Rampant game, it is hard to describe the action but the Okurdaira and the Takeda aimed for each other while controlling the Oyamada protecting the village I sought to stay out of the fight only entering once one side was weakened thus being on the winning end ( much like Stanley at Bosworth Field )

But like any plan, it went for nought, as while Rene left my Samurai alone as he moved against DaveS’ and Kev’s red and white flagged Okurdaira,  his compatriot Francis promptly charged my Oyamada samurai and lost the combat.  “They are samurai?!” Francis exclaimed in his defence,  “I thought they were peasants. Aren’t peasants easy to kill?”

However with that, I decided to help the Okurdaira but as I came out of the village DaveS and his Okurdaira teppo (handgunners) then shot at me “They were the nearest and best target!” he would say.  You do get the idea that these players do not care a wit about strategy and just want “to throw dice and kill things”

I retreated but to the village to let them sort it out, which, after quite the bloodbath, the Takeda with their black flags, won the attrition battle.

WAT the heck am I doing?

I ask myself, "What the heck am I doing?"   "Well", I answer myself, "having fun, and besides, you already got some tanks do you not?!"

The why and how is of course the all-tank game "What a Tanker" which has been nicely promoted by Craig within The Club for the past months. He set up a very nice looking game at the local hobby store last week with a lay out of a town and hill for the Shermans and PzkwIIIs to roam around.   Interesting choices based on your dice rolls.  I managed with my little 'ol Sherman to come up behind a German PzkwIII within the streets of the town to blast its backside and later played a very, very close dance with another German.   So close that he could not shoot at me as his barrel could not rotate enough in the small street!
He backed up, I hit him well, but not sufficient to render him hor-de-combat and with only throwing two command dice, got exactly the right combo of rolls to take me out. Sigh. 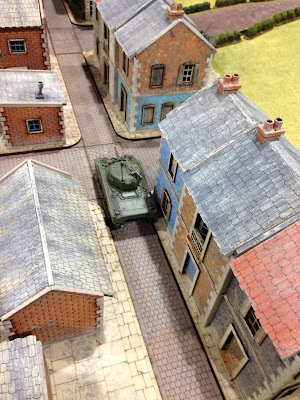 Stoked by the game,  I immediately thought of gaining my own model.   Interestingly I already have models I bought very cheaply a few years ago at the B&B and planned to use the KV-1b as a Leman Russ for my small 40K contingent. I spent a bit of time yesterday refurbishing that model to have the commander either in a open hatch or with a cover for buttoned up - which is an important distinction in the rules.

I also have a T-34 but not a great model and a previously built (by others)  Panther but it is not painted. All models are 1:56 scale as is played at club.

Generally I don't play in WW2 games as the rules tend to be complicated, the size of game way too large to play safely in an evening and I have no interest in expanding my collections in that direction.  But with these rules, one tank is all it should take to have a fun lengthy game -  assuming you don't run into a big gun with hot dice early!

a French unit of the AWI

Left over plastic bits and bobs can be useful, even for the ‘metal’ crowd.  I this case I had years ago built an American Revolution French force for the siege of Savannah in 1779.  I had moved away from that project but had one last unit primed and ready to paint.  But with sprue full of extra Zulu (read: negro) plastic heads available I was now able to create the rarely seen Chasseurs-Voluntaires de Saint-Domingue which played a role covering the French re-embarkment.

Clipping off the metal hats, then heads, of the Front Rank figures, I inserted the plastic heads. I wanted some variety from the identical heads so did not try to be too exact in the cuts.  In hindsight I probably should have done a more identical approach as the other Front Rank French have a straight ahead, ‘no-neck’ look to them.  I guess I have been influenced by the more recent ‘realistically proportioned’ renderings than the style of the decades old “thick and squat” sculpting style epitomized by old Front Rank poses. 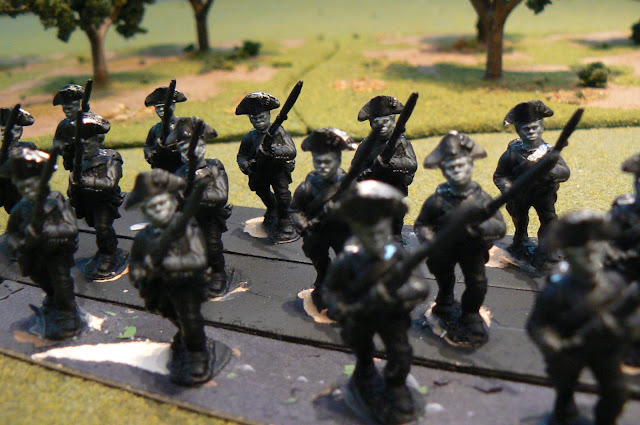 As you can see, I took the photo shortly after gluing but before adding a black undercoat so the work can be better seen.  I will eventually get to them but no real rush as they have currently no opponent to battle with! 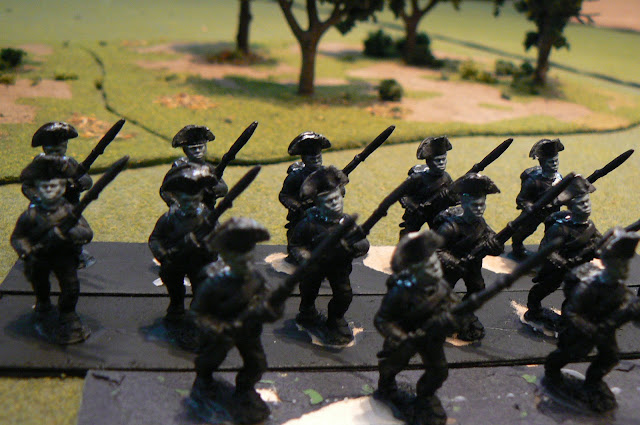 Saxon forces of the GNW


During the holidays I finally finished my Saxony contingent for the Great Northern War for which two of the local boys independently started the same project.  They twisted my ‘rather rubber wargame arm’ to have me create some reinforcements for WillB’s Russians to face the fury of KevinA’s elite Swedish foe.

For the most part the other two have used Warlord’s (ex-Wargames Factory) plastic WSS figures and I have followed in that path and also altered my usual painting style to give them a very basic paint coat then cover the lot with Army Painters ‘Soft Tone’ (from the small bottle)  While it certainly darkens the tones, it provides a similar effect as the other collectors forces.

It might be noted that they were rebased from individual stands to square multiples (40mm) given the more formal lines of battle.   I have large enough force of line infantry and cavalry and contingents of dragoons and grenadiers along with artillery support to satisfy most of our scenario requirements.

Fun minor project and interesting to gather the campaign and indeed uniform information as it is one of the few major wars I was not really familiar with.  I like the colour red so this would be the army for me, it would appear!


No Year-in-Review for me.  I painted lots in 2018 but didn't make any lists. During previous years I made lists of unit 'birthdays' but going back upon them I would remember painting a particular unit but, what!?  that was five years ago?!! How the *bleep* did the time go by? I do not want to be reminded......

But while continued painting and playing was moderately consistent, so to was my dice luck.  A funny thing with me and dice:  I roll very poor dice. Very poorly.  I won’t even think of getting near a craps table.  I rolled 36d6 consecutive dice recently in a game without recording a 6 among them (.014% chance of doing that apparently I was reminded)

So when depositing two new dice on my wargame table from my pocket - a gift from our LFGS hobby store owner - I was not surprised when both icons representing the ‘1’ came up.  For me the ‘6’ is always hidden……. 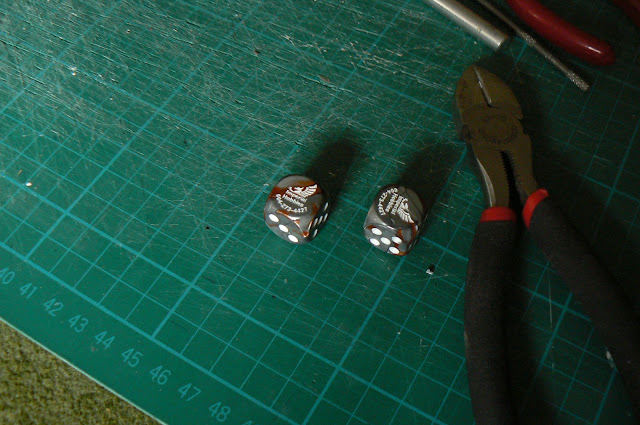