Lord of the Ring battle

Still under the weather with a lingering cold, I got over to Francis' for a Monday Night game.  A 'Lord of the Ring' affair with me controlling a command until his son would arrive.

I don't know anything about the rules or even the types of combatants as I have not read Tolkien's Middle Earth books nor seen any of the movies - gasp!  To these players about a sin as a priest never reading the bible.  But there you go.

Nevertheless, a spear is a spear, an archer an archer.  I had the "Riders of Rohan"  armed with bow and hand weapon with a shield.
On the left flank I faced Francis' bad boys on 'dogs'.


The rules were patiently explained to me but I still had some lapses.  "What am I rolling for?", I would ask as I threw the dice. "For the kill", was the response as the die came to rest. "Well don't worry about against what", they continued as to interrupt my unsaid question. I rolled a 1, of course.....

Anyway went at it until Brandon arrived to have a son vs father tabletop fight with Brandon reminding his father that his rider and dog do not get two attacks per combat. Francis thus did not continue his good luck as he did when fighting me and later would exclaim "my dice s**k!"
Apparently our side lost the battle it was said due, in part, with the 'initiative' roll never rolling our way.  In one case we rolled a high 5 but the Evils then beating that by rolling a 6!


Good to see the bunch of boys out on the Monday night. 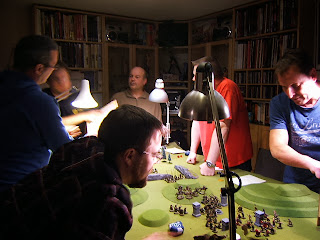 I found a small unit of 28mm lads which I had added a note to myself:  not FIW, could be 2nd SC of AWI

Hmm, don't remember writing that (old age or too much stuff?)    Anyway, this got me back on the topic of my dormant American Revolutionary War/ American War of Independence collection.  To start with it is not much as compared to most of my other projects it has very few miniatures at present. I say "at present" as some - ah, who am I kidding - all of my larger collections unintentionally did indeed start as small!   Gathered due to cheap deals, trades and the like, the collection so far only has some 50 raw Perry figures. 14 British regulars in 'roundabouts', like number of "Marbleheaders" [Eureka minis actually but nice fit], two cannons and crew, a ammo wagon and 24 'militia' - for southern, or perhaps a northern summer campaign.

Having roundabouts suggests the Southern campaign, and I like the small numbers for the Battle of Waxhaws.  But I also have a painted unit of Brunswick Dragoons and 24 German grenadiers primered which suggests the Saratoga campaign in the north.  However. the afore mentioned primered 2nd SC suggests concentrating for that area;  which does allow me to use a fairly large but only partially painted AWI French army organized for Savannah of 1780.  However, these are Front Rank figures which I don't like combining with Perry - too different in style.  Do I still do them?   But with the Perry beautiful sculpts and the plastics box is screaming the Saratoga campaign......  And yet I still so have a single, and painted, Continental unit from un-mixable Front Rank. What to do?

Oh, of course that large, and painted(!) horde of armed slave/native militia types, which suggests a campaign in the Caribbean. Could then use the French but no "Marbleheaders" nor Brunswick Dragoons.  Oh dear.

While I should be thinking more about organizing my bank payments, this is taking up some thought. Too much really but I hate loose threads.  The mind of a obsessed wargamer.
Posted by DougH at 08:30 2 comments:
Labels: AWI, minis, musings

New lighting over the table

It is not for lack of trying as I have been painting much over the past while, but nothing really completed.   I have painted another 4 elements of Prussians and got only to the flocking stage when I started on the next batch.  I have been in 'total concentration' to get the Prussians done so I can truly get a proper historical scenario in the works. But, heck, is this project a big bite full.

So with nothing reporting and some time since the last post, this rather dated post about my new lighting which I installed after pushing my 'fear' of playing with electricity aside. (I really must try to learn more about it...)

I bought I new lighting fixture for over the wargame table.  I was going to go with track lighting but this would entail screwing it up on the ceiling which I did not want to mar and so went with a halogen tri-light.
Creates more direct light on the table but leaves the room darker. "Isn't that the point of all this?" observes my wife.
Yeah, I guess so...

The scope of the developing rules suggest the big picture, not the minutia of small tactics.  The elements are suppose to consist of many battalions, light companies, skirmishers and the like.  But Napoleonics without Jagers, Rifles, and all the known famous 'light' units?!


The completion of my Prussian Jagers has us looking at how to involve those elements we want/will create.  Obviously we shall not them to be all powerful nor create many additional rules or amendments.  Having agreed to keep the numbers low, the light elements while fighting like any other infantry element will not be affected by the disrupting effects of fighting in the tough terrain.  Keeps all simple, which is the supreme focus; convention games require this.