While tossing about boxes in the household storage looking for something, a box of very old and unused Christmas stuff fell and out rolled a plastic tree bobble.  I intended to quickly stuff it back in, when I was stuck by the shape and size.  My wargamer brain kicked in immediately and I thought...hmmm....it may just work!

So later that evening I put everything else aside and tried to be inventive.  What I had seen was a balloon, a 15mm-ish sized balloon from the 'ribbing' typical of the Christmas tree ornaments.  Well, long story short, I finally came up with a facsimile of a period balloon.  Certainly not historic by any means and certainly not even structurally feasible, probably not aerodynamic to be sure, but kinda looks the part.

Absolutely no mathematics was involved in the following!  I merely started by eyeballing the height which I thought was high enough to look the business but as low as possible to not make it too top heavy. (ed. ~8")  Needing to firmly anchor the, thankfully, light weight bobble/balloon I used a rod of aluminum which I twisted around a real twig/ scale tree. It was further anchored by using one of the 15mm OldGlory weird poses, in this case a soldier heaving a large rock over his head (!) and drilled a hole through what would have the rock and fed the rod through the now grasping hands and then up into another hole drilled in a solid cube of balsa wood forming the basket and thus finally into the hollow interior of the upside-down bobble.

"Engineeringly speaking" I have thus placed all this light weight directly over the anchor point for stability which is further helped by the tree "buttress". All this on a card stand with a surprising and welcomed, small table "footprint".
I gathered some 'green stuff' to to create the loose part of the balloon under the inflated part which further hides the wire.  The wire, while very thick in scale (hey it was what I had at hand!) was painted to look like rope. While ideally I would have liked to have more soldiers holding the rope none were at hand, so I would hate to be that poor soldier who seems to be that close to being suspended himself, but he makes the use of the wire look like a guiding rope hanging from the basket and thus perhaps the illusion of a flying American Civil War observation balloon.

A few quick photos before I get on to other more pressing stuff. 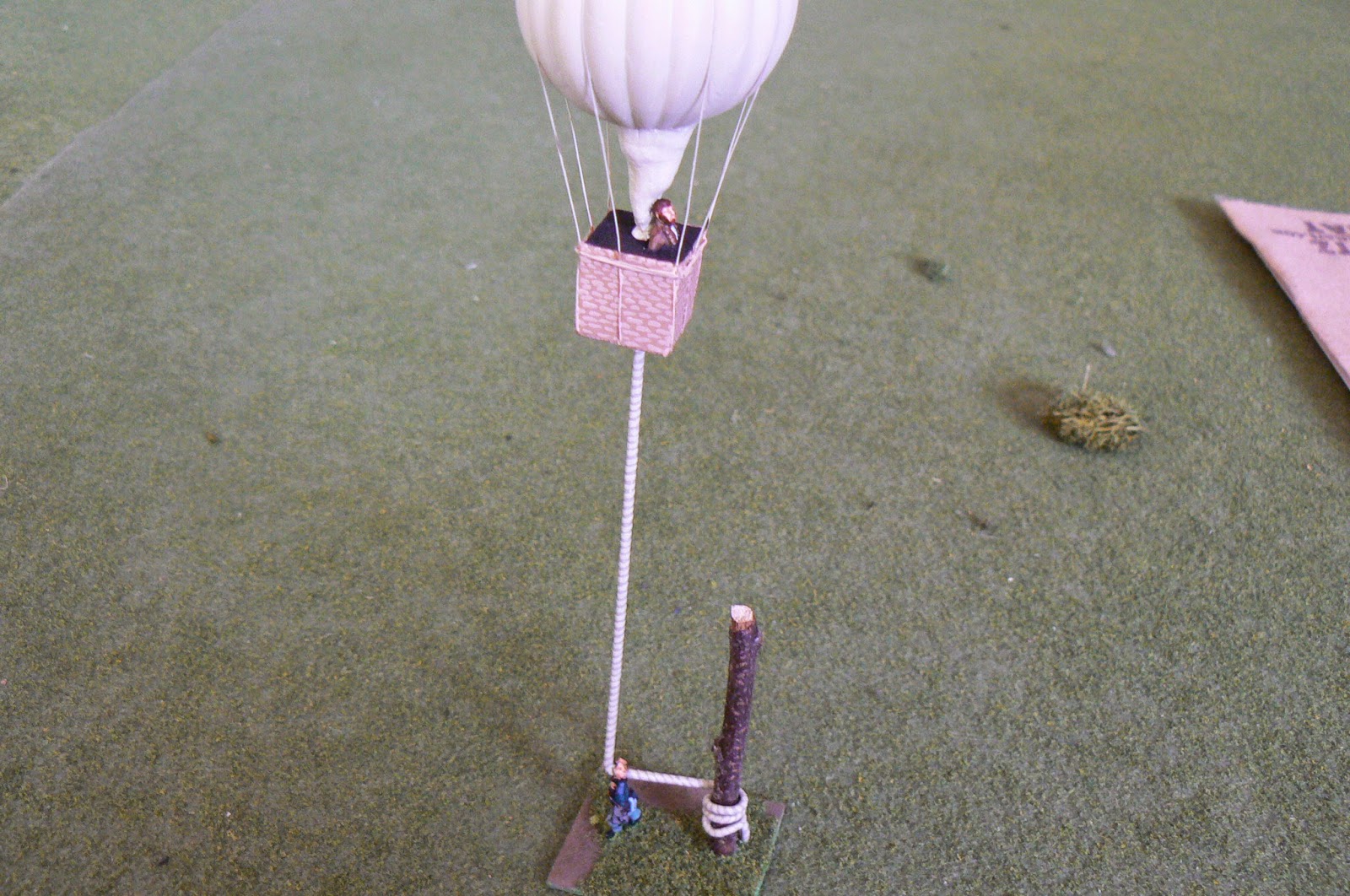 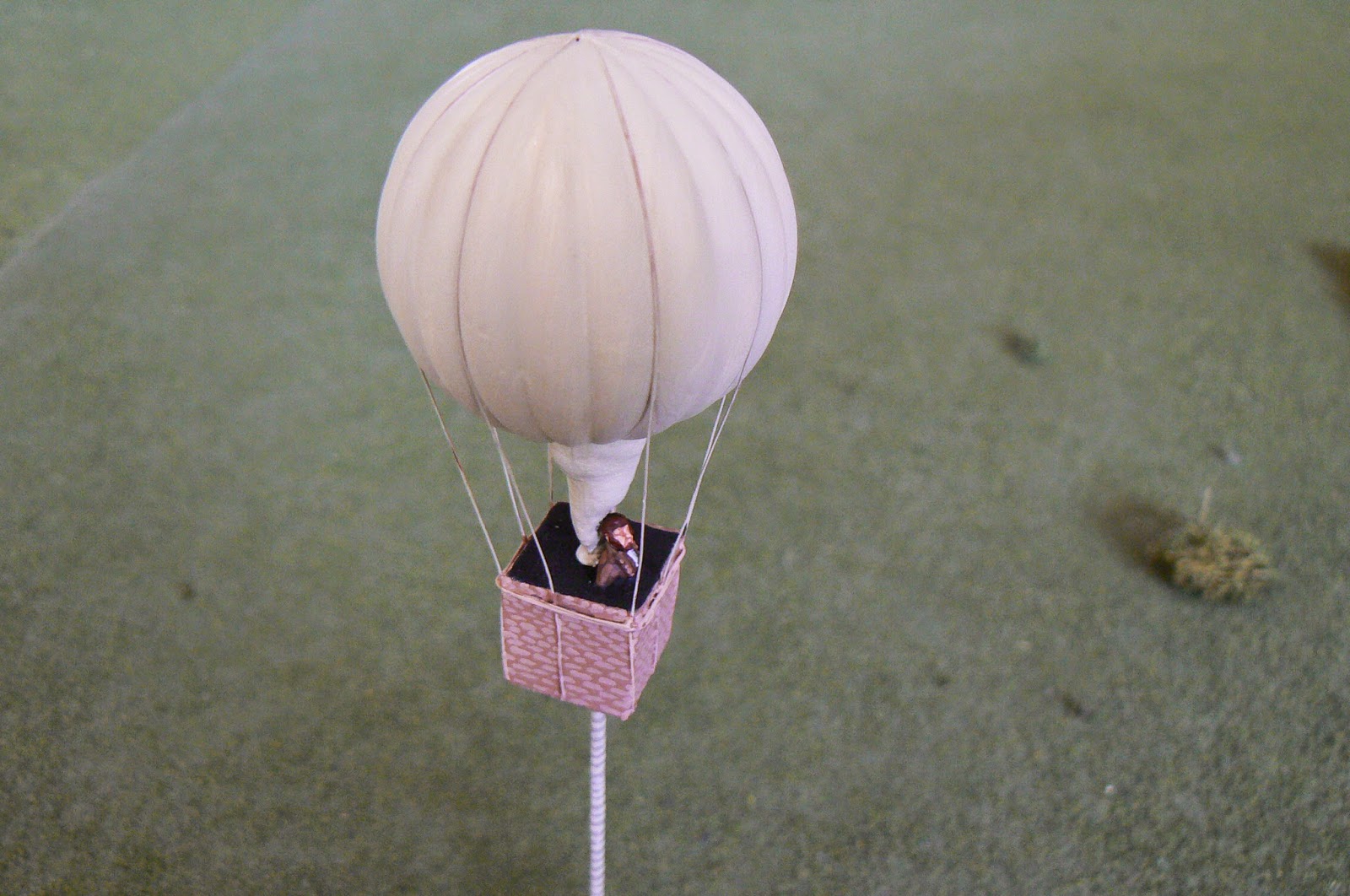 "Save the Whiskey" a French and Indian Wars affair

I had a rare opportunity to attend the Trumpeter club night and with TerryS's ( game director) usual frantic calls for games, I decided to bring my FIW collection out as I thought I had the rules set down tight (incorrectly as it turns out) , and in 28mm should look OK.

My submission described the scenario as thus: Dark Woods, Howling Natives, Provincials scared witless.  But the whiskey wagon must get through.  What more do you want?

My second misperception of the night was that people actually read Terry's club emails as everyone came by to ask what I was putting on.....

Anyway, KevinA and PeterM decided to give it a go with the former taking the French and the latter the British.  Just because I wanted in, and that the table was the largest area I have used for my FIW so wanted to 'fill some space',  I lead the Natives aka Red Indians aka the Savages.  Probably unfair to use them against one or the other I thought; so I diced per turn and see who I would attack! Hopefully both during the battle.

Both players took plenty of regulars with each thinking as the wagon must go down the road and in open ground, the regulars would be best suited than the Provincials, Militia or lights.  Therefore Kevin lined up his French regulars and started blasting away.

Peter responded by fanning out with his lights on the flanks but his command was slowed (poor pip rolls) and Kevin took out his lights and with continued fire from the front, eventually eliminated most of the British. With few left, Peter had no choice but to turn the wagon around and get out while he could.  The fort's liquor rations would be slim for some time.


And my Natives?  Well, my leading war band charged and took out the unsuspecting French militia (mon du, are dey no on ouwer side?!) but switching sides the next turn, went up against the Highlanders and were "quick-killed" - basically an all or nothing fighting unit these war bands! With their loss, I would have to roll higher than the number of native elements left which I did not do so the others left for the longhouse.

Kevin and Peter gave good input into the rules and my phase sequencing and so Peter and I with a bit more time in the evening, set up again with the British and once again mostly regulars escorting the whiskey wagon.  I took the Indians placing them randomly around the forest using blank stands (artfully decorated with 'shrubbery' ) not knowing who is real and who is not.  No command control for the savages!
However with the blanks, Peter was unsure which way to face as I moved the natives to all sides of his developing 'square formation' but he left a gap uncovered so I had one group move to take the wagon. With all the British still around, the tribesmen decided moving the wagon was unfeasible and so merely smashed in the kegs feverishly drinking the contents! That, we decided would make them go "warband" but next turn the British regulars would shortly dispose of the Indians to their front and next turn and eliminate the last native threat.


We ended the game continuing to examine the rules with the result I will now need to totally revamp the entire set.  Two steps forward, two steps back.

I hope the boys enjoyed themselves and it is good to get the collection photographed under the nice lights.

SeanR., our local Star Wars fanatic, invited me for an intro game of Armada, the new-ish game from the Star Wars stable.  While he does have the 'X-Wing' version which is the more individual 'fighter' vs 'fighter' game, "Armada" employs the big boys and more of them, in fleet actions including the small Tie and X-wing fighters in squadron formations handled in a more abstract method.  I think this is the game envisioned by the huge big screen battles of the movies.  Now one can have truly large  Imperial Destroyers, the big transports and such.

The rules are built in such a way as one can continue to add complexity and nuance with special abilities and characteristics (different armour, weapons, etc) if wanted or just the average-joe type for the beginner or occasional player.  All the measuring devices, dials, symbols, numbers presented on the various chits, bases and cards all - eventually - mean something and are quite well thought out.
As only one example, to indicate a squadron's "activation" the game designers have a sliding card which can moved through the model' base from one side to the other, each side having a different color.  As each turn is either one or the other, the player can easily see if the said squadron has been activated. With the many squadrons used, this is a very simply but effective game tool.

Now as everyone who knows my wargaming, I am a terrible pilot, be it in a Sopwith, Spitfire, MiG 21, or Tie Fighter.  Some of it comes from just poor move planning, much from simple lack of regular play, and some from just bad luck.  So it will come as no surprise that in our intro game, my inexperience, SeanR's recent extensive play and good die rolls, and frankly, my bad luck created yet another "flying" loss.  Fun though!
I include a photo of the one and only critical damage card which, flying the Imperial beast of a Destroyer - a ship powerful but extremely unmaneuverable, had its one and only (!) yaw ( read: turn )  cutting my rudder cut as it were, and so.... I calmly sail straight ....and off the board..... .   You see, I did not plan for any repair chits [ with this beast you must try to think what you will need, three turns in advance.  What will happen 3 turns from now, eh?! ]  On the flip side I did order command for my squadrons and thus at game end could beat up on the Rebel fighters. 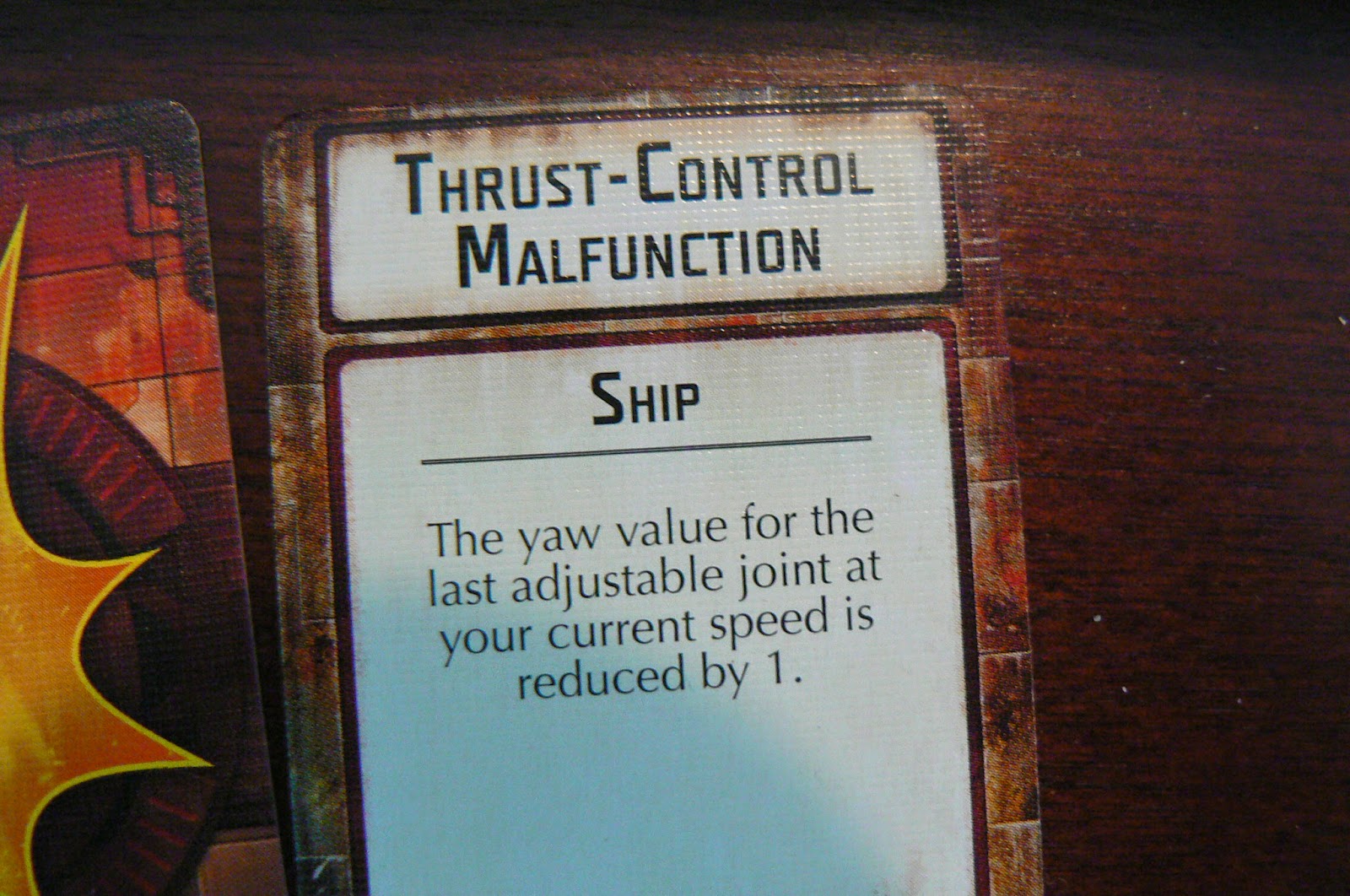 My ship sailing off to Hoth aside, our points based on squadrons lost were actually even 40 - 39.


I must thank SeanR for the game.  He is an excellent instructor.
Posted by DougH at 10:15 1 comment:
Labels: wargames, X-Wing