Game of Montereau from the other side....


David, one of the able Austrian commanders of our large historical Napoleonic Battle of Montereau (1814), completed a fine write-up of the game from the Austrian perspective.

If you missed my original entry: link

I was going to title this entry with something like: "What if I bought just too many French??!" But I may want to find this information in the future.


We wargamers love "what if?" situations.  It can justify many woes.  What if you have only painted up 1940 French and with no opponents done, a friend says "I want to try out the rules Zombie Death. I did up a ton of them last night".
So you make up a scenario where the Nazis, in a genetic experiment gone wrong, now have a zombie drug and...this part is way too crazy for even Himmler?... set about giving the drug to the entire population of Belgium who then cross the Maginot Line to set upon the sleeping soldiers of France.
Uh, yeah...umm, that'll work.

In the same vein, I wondered if I bought too many French (could happen!) could I go about making "I'll bring him back in an iron cage" scenarios for Royalist vs  Napoleon back from Elba.
Having done these battles while building up my Napoleonic French, I have conducted several of these fictional encounters but with the excellent uniform web site for the 100 Days Campaign of 1815 [ Mont-Saint-Jean ]  issuing proposed drummer's liveries based upon returning nobility of the Restoration, it got me thinking this would be very interesting! 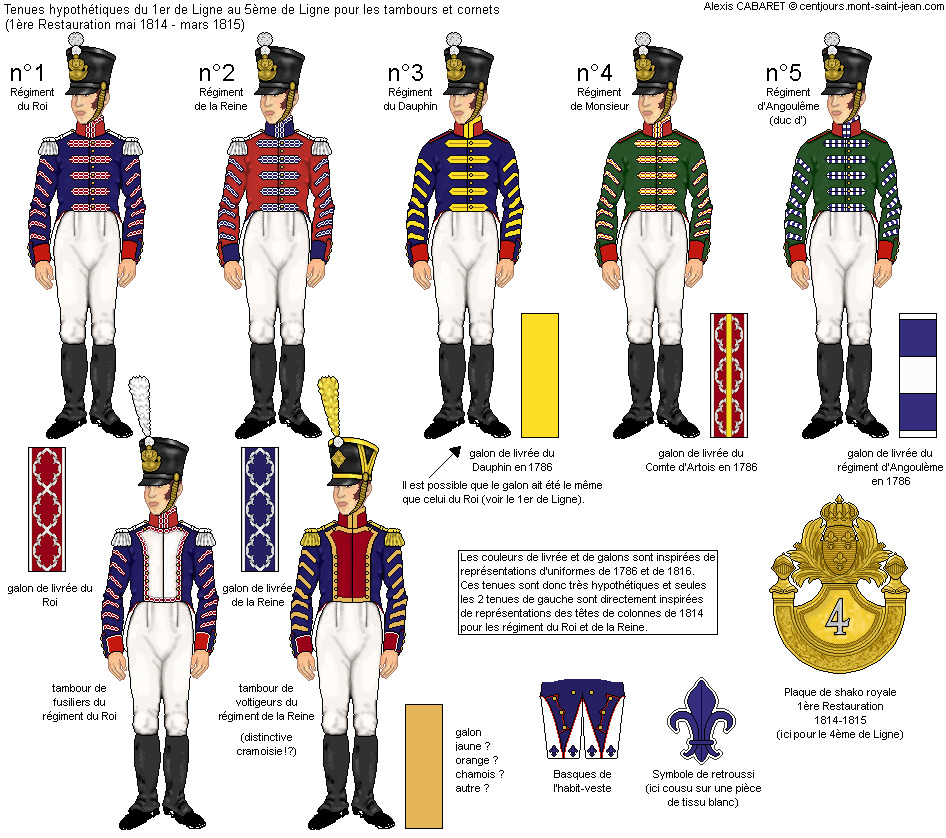 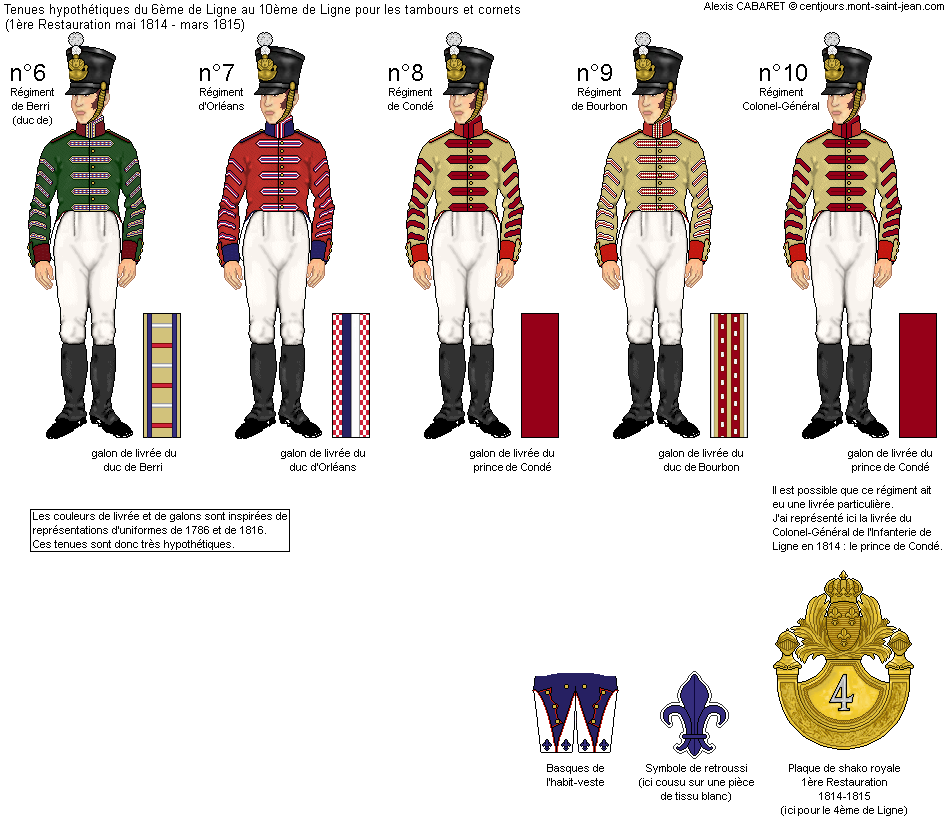 Oh my, I can read The Times of London headline now....
A minor tribe of Southern Africa defeated
Reports have arrived that a small tribe led by Shaka have been defeated by the Ndwandwe near Gqokli Hill thereby altering the future history of this nation by not allowing it to have a glorious defeat some fifty years in the future as a result.

Andrew called me and said he was on vacation and wanted to have a game, "something in 15mm".
Not having done anything with my Zulus for awhile, I pulled them out and using a modified DBA rules and used a scenario from the details by an old Wagames Illustrated article by Ian Knight on the historical battle of Gqokli Hill.  This battle brought the Zulu under Shaka to prominence with a defeat over the Ndwandwe in the year 1818.

The scenario had Andrew commanding the Ndwandwe to divert troops to burn the Zulu krall (homestead) and gain a moving herd of cattle. ( I also had the provision for a roll each turn to have part of that army, based on the actions of some of the thirsty troops of his army to move to back to the river but totally forgot that once the game had started! Would have changed things a bit I would suggest.... )  The rolls was random and thus the very large Ndwandwe army would be broken up as it crossed the river.

As it were, the Krall and cattle were not taken and the diversions but held up the advance but little. Nevertheless the Zulu seeing some advantage to the scattered enemy, came off the hill to the attack.  The large leading Ndwandwe regiment was eventually seen off but the much smaller numbers of the Zulu lead to them being flanked and eventually defeated.

This fun game highlighting that the Zulu, both in their early history and the later 1879 era, still hold great interest for me. 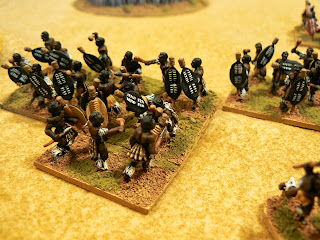 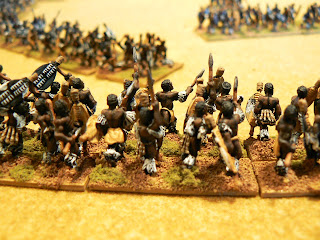 In our ever continuing quest for rule perfection - oh, hell... we will settle with 'do-able' !! - Seth and I arranged a mid-summer game at my place for the playtest in a "convention" setting with a few of our enthusiasts for the Napoleonic Battle of Montereau which occurred during the 1814 campaign.  wiki link

This was picked as we could use both my French and all the Imperial Guard, and Seth's Austrians.

Played on the usual 8 x 5' table size of the Enfilade! Convention.   Which surprised a few of the guys as I broke down my usual 10 x 6' table.  Interestingly enough most of the battles ( including Waterloo for example ) we can be recreated with our rules and basing system with 28mm on this rather small table size without compromise.

The boys showed up around 10am and following the greetings, refreshments and tour of my gaming rooms, Seth and I gave the preliminaries of the scenario and rules.  While I had to combine formations for the OB and simplify the terrain I also adding the new experimentation of roads and, well, the space or distance of routes of march---- yes, even on what at first glance would appear to be a small table proved to be large distances.  This was all part of the plan.  We employ the "go-to-the-breaking-point"  type of rules writing to know what works and what does not.  That which does not work, we discard or think of a better AND simpler way of achieving the effect.

For example the roads are out. These add complication and does not match to the level of command we are tying to recreate.  That is simpler! Grin.

A few pictures of the affair 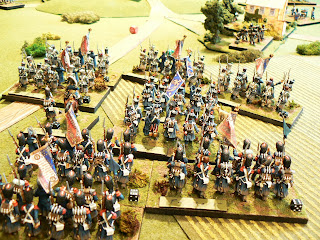 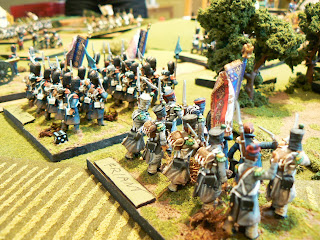 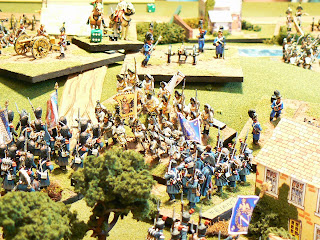 The game I though went well and kept me stoked about continuing my crazy quest of Napoleonic masses......
Posted by DougH at 11:44 3 comments:
Labels: Napoleonics, rules, wargames, Waterloo Project

Mike B. made the semi-annual trek to the big city for his work and wargaming play so we arranged for a small game at my place for one evening.

My French and Indian Wars collection is complete or as much as I want to do with it....it fits nicely into three boxes; any more then I would have to start another box!    The rules I use are a home-brew kinda based on DBA but with recoils marked which gradually reduce the fighting ability.

The first game was remarkable as I seemed to roll an awful lot of sixes.  While I did capture the wagon full of kegs of whiskey, Mike still outfought me.  My Natives and Coureur-du-Bois do not do well in a stand up battle. 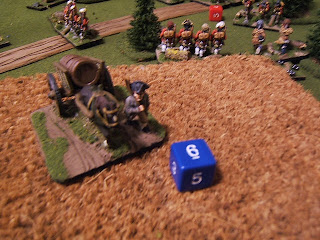 We used the same OB for the second game with much the same results and his regulars out shooting my French types.  Mon Deu ! 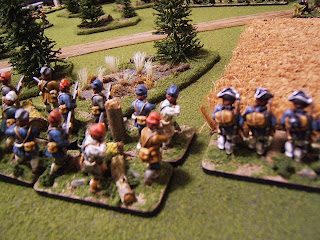 It was fun nonetheless and it is always enjoyable meeting Mike and catching up on events.

Your dinner meal is before you.  Do you start with your favorite food or do you eat it last?

For myself, I eat the favorite last as it will be the taste last on the lips.  However for painting a new army, I like to sample the favorite or coolest unit first; painting the units which excite my taste buds. I like to get the juices flowing and then later I might have to grit my teeth (much too harsh a phrase as I do like the painting) to get to 'the usual' eventually, in order to get the army done.  Playing psych jobs on my own head.


For my new Prussian Napoleonic army, with the thought that it will be but a unchanging sea of dark blue, grey and black (untrue as it turns out) I wanted to start painting the more interesting and uniquely costumed units. For the Prussians this proved many more than one would first think, besides the usual minor distinctions we expect.

The 28th Infantry Regiment, for example was ex-Berg and at least some or the troops apparently still wore their old white tunics with light blue facings.  The official new uniform was in dark blue with pink (!) facings.  A very interesting mix, so I did most in the white , having the officer and a couple of the newer uniforms in the left rear.

I received my Perry order to finish (well, almost) the crazy stupid 100 Days Order of Battle.  Along with more Prussian and British light cavalry, I ordered more of the nice Perry French Generals.  I love the uniform.  The ultimate Napoleonic image.

However one pose - shown in the photo from the Perry website as d'Erlon - was, while OK, and hard to see from this angle, has his sword resting on his arm at a odd-ish angle. And the sword was bent and could not be put quite straight again.

...off with the sword.  I was hit with inspiration and quickly got out the 'green stuff' and started to model what I hoped would be a good representation of a basket of small red fruit held in his hands resting on the pommel of his walking horse.

This was to be Marshal Grouchy as he was said to have been eating strawberries, hearing the cannon fire to east but, having his orders, refused to march to the sound of the guns leaving Napoleon to his fate at Battle of Waterloo (la Belle Alliance).

Once painted I hope that it will show the horse (being ridden by Reille in the Perry photo) seemingly startled by the thunderous noise and Grouchy looking to his left as he continued northward in his slow pursuit of the Prussians.

Hopefully any of the poor 'chop work' and sculpting will be covered by my thick paint brushwork.