One of the kept articles was this rather humorous one of rules for sheep herding by Derek Henderson and Rob Le Vesconte.  Inspired by the rules - quite good and simple - I just had to, had to did I, to make the required pen, paint up the sheep and dog (with his previous location marker of a gloss brown lump on the ground) and the shepherd (an ECW artilleryman with added bend wire crook)

How can one not resist the lure as suggested in the introduction:
"If you find you are the wargamer given the flank to guard and no-one attacks there, or you simply find yourself up against an opponent who takes twice as long to move his troops as you do, then this game is for you.  Simply grab yourself a shepherd figure, a flock of sheep, fours fences to make a pen, and a dog and indulge in a little rural pursuit in some quiet corner of the table"

Note: I wish I had this set up during some of those extremely boring convention mega-games in which I suffered through in the past and now which I try to avoid!


Highlight of the rules are: "Sheep drift":  "If a sheep's move is halted by an immovable object (wall, house, French Grenadiers etc) then move....." 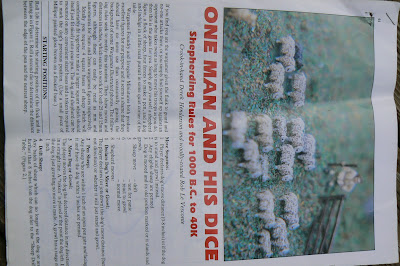 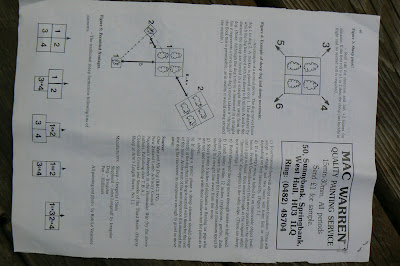 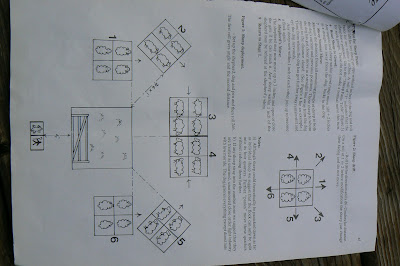 Unfortunately in my sometimes manic ripping up of the magazines and cutting of the UK A4 paper size to the North American sizing, I failed to keep in which issue I kept this article.......
Posted by DougH at 00:53 4 comments:
Labels: modeling, the silly side

Never heard of the  Chinese invasion of the Country Essex during the mid-14th Century and their defeat at the Battle of River Baldmore in 1348?  It was because of this victory of the English longbow that you have not!

Having three full but same liveried 24 point retinues(!) ...but no other medieval forces; and Andrew with no available forces himself, we shrugged off history and he brought his Chinese (refitted after an unfortunate box dropping incident) to have another go at the Lion Rampant rules.

Both of us having the rule book in hand, we helped each other through.  The rules are simple and effective and with good friends not worried about the "half inch extra", it makes for a fun game.  Had us both talking of making new retinues (armies).

His retinue in this battle had seven units including 2 bidowers (read: small unit of skirmishers) who actually did stellar work on my larger units of expert archers.  My good rolling of 'courage' saved me from losing them.

I used one of my retinues consisting of a dismounted MAA unit (tough lads these) a unit of foot sergeants, and two units of expert archers (these hit 17% better!) 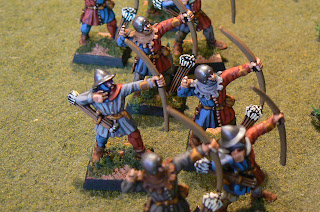 The highlight of the battle - well for me at least - was the attack of my dismounted men-at-arms (and dutifully counter-attacked by his mounted boys) but with ALL my dice gaining hits and taking off 4 of his contingent including, with Andrews incredulous roll of double ones, his General! Unfortunately for the Chinese, their battle went downhill from then.

a few pictures of the action

I like the summer heat as we don't often get all that warm, with a few days exception, and certainly do not want to waste the opportunity to get outside while still doing some hobby stuff.  Usually that entails working on terrain items or prepping of the miniatures for the winter.  Think squirrel.
However, this year, once again the premier task was the dual Roman DBA armies. (see:previous post)

With the outside in mind, I do not do my usual painting method but white primer and splash on the colours without too much concern with total neatness knowing the wash will (hopefully) cover any indiscretions.  Crouched over a folding table and chair, speed of application was the goal.  With the  time needed to complete their basing terrain included, it took me about 9 minutes per figure from "raw lead to ready-to-game"

The miniatures are mostly Old Glory Caesarian Romans with some other unknown types used for the auxiliary troops that were gained from trades.  The DBA rules armies are wonderfully small and so only a few Old Glory packs are needed -  these being found in the bargain bin at the local hobby store!


I have yet to game with this army nor indeed the previous "summertime armies" I have done.  Truth be told they may suffer the fate of several of my collections to be ever in a box -grin-
For many fun in the sun is on a beach.  My version is painting armies and enjoying my hobby.