Terrain is just as important....

While it is getting a little better these days, what with the internet to show beautiful miniatures, and of course the glossy wargame magazines to illustrate the best examples of the sculpting and painting art; but perhaps we put in too much time into the look of the miniatures and not in the setting in which we display them on the tabletop. Consider a beautifully chair sitting in an unfinished garage.

But many times we see, and have done ourselves no doubt, putting nicely painted, well done, realistically based figures on a plain green cloth with a few haphazard trees on felt with a brown cardboard road.  Blech.

I am trying to look less at the lead-bin bargains and trying more at the terraining aspects these days and spending the money and time to build up the tabletop terrain.

I have recently bought ready made plastic trees (I will go with the less expensive make-your-own variety in the future but wanted to know if this is the direction of the 'forest' type I wanted). 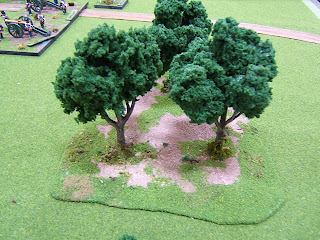 I cut out random shapes out of hardboard glued the trees upon and did my usual terrain/basing technique.  Not much undergrowth so to allow troops to move through if required and the subtle outline will allow the large stand to work as only 'decoration'.  Better than just plain felt.  Storage is more difficult but sacrifices are sometimes required!

On the Road to Paris

In 1815 after his abdication and exile to the island of Elba, Napoleon returned to France, challenged the King's force meant to stop him,  which promptly returned to his command. The Bourbon King then fled .
But what if the ex-Imperial army did not come back to Napoleon, and indeed did try to stop Napoleon and his small army of Guardsmen from moving to Paris? And if Napoleon pulls his "And France is me!!" stunt, would it work or the be the death of him?    This what-if scenario pits Frenchman vs Frenchman in this Napoleonic battle. 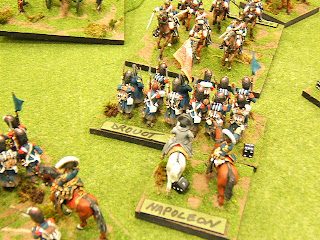 Not a bad what-if battle..... considering I only have French painted at this time!  Hey, if King Louis XVII had any backbone....

So I hauled the figures to, for me is a rare club GameNight and had a few of the usuals want to command.  I took some time explaining the rationalization of these rules.  For the most part they got it but it is funny how some of the 'traditional wargaming concepts' still come out.

For some of the players the big advantage of the Guard morale/combat effectiveness was highly discouraging.  "Look at the math, I have not chance of hurting that element.  I will lose all the time!!"  But, I say, have you even tried to wear him down? You have more units, hit him in the flank.  Hmmpf, the player shrugs, not with the pips I am getting, he says.  Well, thems the break.

However on the other flank, with the much abler Andrew handling his forces  more adroitly, the weaker Royalists, managed to wear down the Bonapartist Guard units, blocking others with well placed cavalry, and eventually making hors-de-combat two Guard infantry elements ( their only losses however. The Royalists lost 11 !)

A change in the game occurred as, Jim, the player with Napoleon, really, really, wanted to test my, only for this scenario, "And France is Me!" rule.