Another fun battle of “What a Tanker!”  armour combat rules with WillB providing his collection of Sicily-appropriate Canadian tanks and a few German opposition.  I provided the terrain (probably more desert than Sicily but that is all I had Italian…) and, of course, using my new bridge. That did not surprise WillB.  The scenario was a ‘rescue’ of a immobile Valentine but functioning “Harry” by the intrepid C Troop of Canadians consisting of Shermans “Chief”, “Cyclops”, “Corvette” (a Firefly with a 17 lb) and “Cobault”.  Against these Allies were a PaK 35 waiting behind a stonewall, a Beutepanzer StuG M42 / Semovente 75/18, and, well, a big bad Tiger I.

WillB’s troop had a bit of rough time of it as the scenario had them bunched together and needing to crossing the bridge.  After the usual fits and starts and stops of WaT, the Valentine was destroyed and my Tiger finally took out a Sherman (poor “Cobault”) but “Cyclops” proved to be the star crew as it took out the PaK 35 (squish!) and distracted the Tiger.  At one point, I had positioned the Tiger for a nice close flank shot on the Sherman but had not the dice (yet) to shoot.  But “Cyclops” was in a position that, if it got initiative first, to move behind the Cat. The Kitty did not get to go first and so lost sight of the Sherman.  It was not “Cyclops” in the rear but “Corvette” and its powerful 17lb which took out the German beast.  That left the crew of the Semovente to call it a day and depart thus giving the area to the Canadians.

"What a Tanker!" is an easy, fun game.  OK, it can be frustrating at times:

but of what I read and have learnt of tank combat, it is not far off the mark if you add a bit of narrative into each turn of play.  Things happen, things get FUBAR'd, commands are misunderstood, etc, etc. all this in a span of actually only several minutes of combat.  It has scratched my WW2 need in any case.

Inspired by videos on clever uses of left-over, ready for the rubbish bin, throw away plastic sprue frames after removing all the possible useful bits, I gave it a quick thought and came up with using sections as iron beams in construction of a bridge. 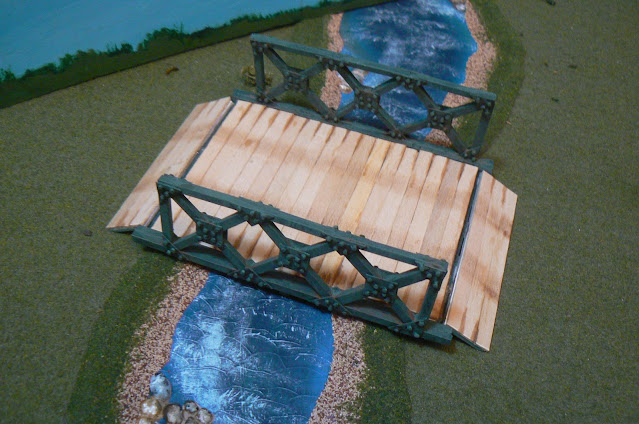 All the girders?, joists?, umm, the ah?…well, the iron bits anyway…. are cut from discarded plastic sprue frames and the bolts/nuts are thin sections of unused plastic medieval spears.  Note the use of “discarded”, “unused”.  While I might say it is to see what creative uses can be made from scrap, one could also say that I be just too cheap to get a good model.  But then, I can say that I had good fun for only a few pennies of cost.

The photos show some of the construction.  The length of the bridge was limited by the longest frame available.  I was not willing to try to shave down all the nobbly-nibbly bits  (see his YouTube vids for more ideas: youtube link   )  as this would compromise their widths and thus construction - and frankly a real pain in the *blank* to do!  So only certain lengths could be used.  Also, only half way through the cutting did I notice that the outer frame and inner connecting sprues could be different widths.  Hmm. 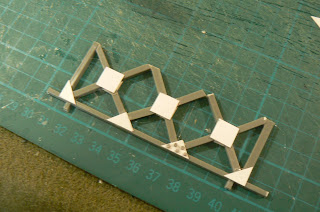 The construction was done for effect and certainly not to any engineering specification.  It is sort of a cross between Bailey Bridge, a Tress Construction, and an Iron Girder form.  Civil engineers might have a chuckle but it does bear the weight of a tank, so it can’t be that poor a design! 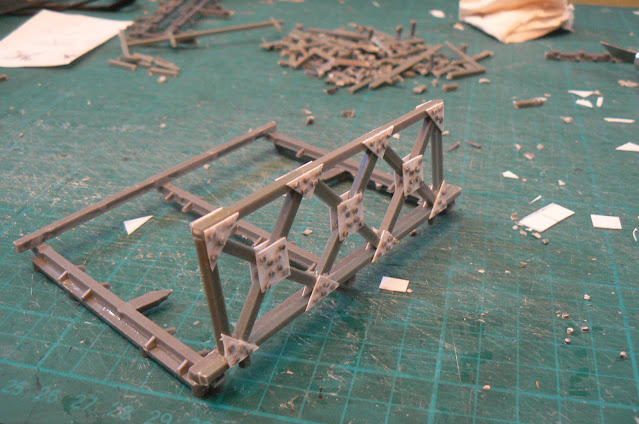 Like the news anchor who is all suit-and-tie above the desk, but out of sight of the television camera is wearing comfortable sweatpants beneath, I don’t usually bother about painting that which is not normally seen.  But the following photo does show my use of discarded sprues.

The deck was made by using wooden coffee stir sticks on a card backing.  I used PVA/white  glue down the middle and a slow settling epoxy along the edges;  an idea to limit warping.  While it worked, I used too much PVA which, once touching the top surface of the wood would not take any staining, and the epoxy seeped through to the surface creating a yellowish stain.  Well, darn.   So I just used some earth-coloured paint and covered up the stains and dry-brushed some tread wear on the surface.  Quick and easy and looks OK-ish.  I think of it as a newly built bridge so not much wear on it yet.