David, who played in the Battle of Montereau summer game came by for an all day affair and wanting to get a big playtest I came up with a rather expedient scenario in order to put all I had on the table while not having enough Allies to do a big battle .

Thus:  We all know that Napoleon arrives back in France about a year after his exile.  Roi Louis the Fat buggers off again and Napoleon "picks up the crown from the gutter" Waterloo et al. However it has been suggested that if he had waited but another year or less perhaps, the Congress of Vienna may have broken down into war and the Royalists even more despised by the French people.
So thus we would have the French army more entrenched now with the royalists so half remained loyal with the king and half ( half my elements uniformed with overcoats matching the Imperial Guardsmen) supported Naps. For game purposes all the royalist artillery were Prussian as was one large corps of infantry and all the cavalry in green uniforms.  All else was on the Napoleonic side.  We kept it straight anyways.

The scenario based very, very roughly on the historic battle of Bautzen had David defending with 38 elements vs my attack of only 31 across a disrupting river. Napoleon with the Imperial Guard of 8 elite infantry elements with artillery and horse support was to take him on his right flank.  He was warned of this and two redoubts were available to him should he want to use.  He did and kept his Prussian corps intact for the most part awaiting the Guard onslaught. Unfortunately with 2d6 I secretly, and uncharacteristically, rolled a high 10 which as we went 9.5 turns (10 hours of game time, 6 hours of real time including discussion and breaks) meant Napoleon was late!

By that time my attacks had petered out and half my elements eliminated.... Obviously should this have be a campaign game, I would have ceased my attacks well before but as this was a playtest...

The rules went well, Version 1.7 now I think, but the "feel" is still there and right I believe. With more and experienced players the game would have moved much more quickly. 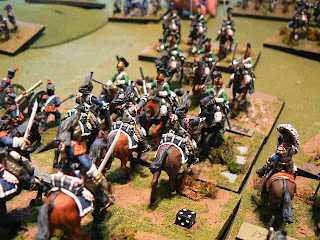 First off, major disappointment.  With lots of planning and arrangement and purchasing of the flight, this weekend was to be my trip up to see Mike B. and do an all-weekend game fest.  However, fog.  Lots of fog.  All up and down the coast for 500 miles and not burning off.  Well, perhaps just for an hour late in the day, before the sun goes down and it rolls in even heavier.  Many cancelled flights especially the smaller carriers to the smaller towns including mine. Damn. Damn, Damn.

With the weekend open, I decided to do another go at play-testing the rules and set up this historical battle again. Good to compare the command rolls verses the first go-around.
Because of the complete randomness of the rolls, even small commands of 3 or 4 elements cannot often benefit from the comparatively potential of pip happy times.  Well, not with the numerous 1's and 2's I roll certainly. This was made very evident in an interesting conclusion of the battle as, with the French retreat in full bloom, the right flank Allied commander obviously frustrated with no more opposition to his front yet rolling poor movement pips each turn, drove only an element of dragoons forward in an effort to close off the bridge to the retreating French.  On the way his sliced up ol' Grouchy with a couple saber cuts (lone HQ overrun on a "Danger to General" roll. Adds drama and if the General is killed, the HQ is eliminated and all elements now double price to move)

Anyway, this silly dragoon brigade is now out of command distance, the player (me) not moving the HQ to keep pace. Well, now I again roll a '1' which does not allow the dragoon element to about-face to meet the oncoming French; who besides, laid up a cannon to blast its way past!  A lesson to all the players to keep all under command distance.

Also had other situations which hopefully simple conclusions with the rules will result.

With only 7 turns done, which at half-an-hour assigned per turn, it is roughly the same time frame as the real battle and this was done in a fairly small area of 3 feet by 4.5 feet.   Lots of elements eliminated or done to 1 MP only so conclusions to any battle will certainly be easy to reach.

The Battle of Limonest was fought on March 20, 1814 near the important city of Lyon during the Campaign for France.  While Napoleon fought the main armies of the Allies, relatively unrecorded battles were fought in other parts of France. Augereau was tasked to occupy the other forces of Austrians and protect the city of Lyon.  Heavily outnumbered he deployed available forces north of the city at Limonest and Dardilly.  With 18,000 he faced some 48,000 (some sources suggest over 62,000!) Austrians and Hessians.

While the sources of the battle (many from poor French translations) are confusing, I decided on 10 elements of French to 23 elements of Allies and deployed as accurately as I could determine.

With that as the framework for the scenario, I did "play around" with the rules to test certain aspects.  The rules themselves worked well.  Used the 'new' rule that after a round of combat the defeated element has to retreat at least 2 inches.  If unable, it must find to next nearest spot to place itself.  This simple expediency did keep the results easy and certainly promotes the use of reserves.  To counterattack the player must find the pips to do so.

Because I was soloing this, I only accorded one d6 per army. While certainly a test-it-beyond-the-stress-load-until-it-breaks kind of expediency,  obviously it hampers the Austrians more than the French with their more numerous elements.  That, and the die themselves which seem to roll always very low for the poor Austrians in a historical effort to mimic their command sluggishness?  While interesting as a military simulation, I think as a game ploy, each player must have a d6 to do any good on the table.

And yet, in another effort to "simulate" the seemingly poor Austrian combat efforts, and even though I think this is certainly overplayed in the histories, I used similar modified combat dice as the red ones, but these white ones have one more 0 and no +3.  Verses the reds they come out very poorly percentage wise.  Funnily enough, during the playtest, this was not evident as the Austrian rolls beat the French many times and at two different combats, it took three rolls to resolve the close combat - completely destroying these fresh units.  Things legends are made of!

Of the game, the thin French line was forced at several points which got the French command nervous about flanks and so forced retreat with one command trying to retreat in whole (but the movement pips in short supply) exposing the next command.  Basically as it happened in the historical engagement. Grand tactically, a brigade (element) of Allies were sent around the Mont d'Or on the French right to outflank their line.  While pip-starved, I did not move this element, it was a constant reminder to the French of their precarious position.

Rather fun game for a couple of free hours on a nice holiday afternoon.

Marshal Grouchy and the boys

Finished the rest of the High French Command.   All are from the Perrys. 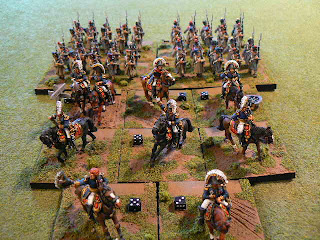 I did not concern myself with keeping the horses with a particular rider so these may be different from the Perry website.  The HQ stands are meant to be interchangable for any scenario or battle with a commander's name placed on the space to the rear of each stand.  One might note however that their "Jerome Napoleon" certainly bears a resemblence to his brother. 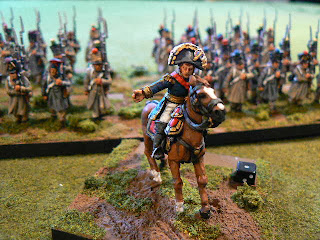 Here are a few other samples 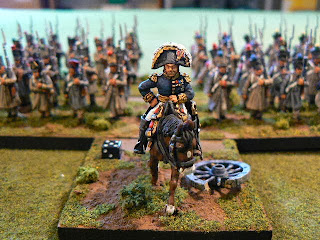 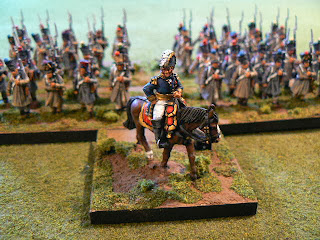 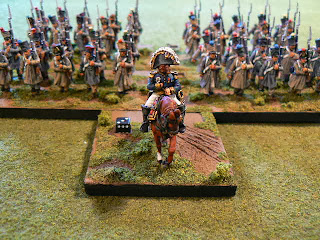 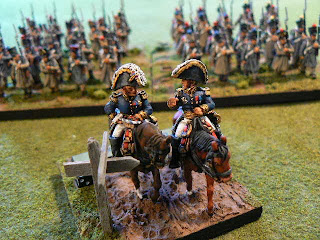 I did do more of a job on poor ol' Marshal Grouchy. (for his modeling see: previous post )
History tells us that he was eating strawberries, slowly following the Prussians rather than marching toward the aid of Napoleon.
One can hear General Gerard plead with his superior.  "Sir, march to the sound of the guns!"
"No, Gerard." says Grouchy, "The Emperor has given me his orders"
"Well then let me go!"
"And split my forces?! France will never forgive me." And more to himself...."and France may be right"

I have found it interesting that only the French are often portrayed in the ubiquitous overcoat than all the other nations of the Napoleonic era in the usual course.  Certainly the Perrys in all their plastic boxes, and indeed all the other metal manufacturers, only the French are wearing their overcoats.  Almost half the Perry plastic figures and so I have a bunch of them. Rather than mix, I have whole units wearing them.
I finally finished the last of my French for the 100 Days Campaign/1814 France Campaign fought in the early months of that year.


The following element is specifically for the 1814 French campaign as Napoleon, desperate for more manpower sought to use the National Guard, and this element I created to portray these soldiers.