I was taking my new Sengoku collection for a solo test spin with Lion Rampant rules yesterday.

The rules has the player activate and then conclude any actions such as combat or firing before moving to the next unit, with the player choosing the sequence depending upon tactical considerations.  However, sometimes the player will lose track of which unit has activated or not.  Or at least my memory can fail, especially if interrupted or needing to leave the table during the turn.  It may be necessary to mark those units already activated and obviously markers would be the solution. I therefore decided that one could combine the use of these markers to the requirement of “battered” indication for a unit into a single simple chit for the tabletop.

I used MDF laser-cut very small rounds as they are uniform and thick as to allow ease of pickup from the table.  I painted one side with my usual “earth” tone colour [ as to be discrete on the table ] and the other side of the chit in the ‘colours’ of the retinue.
I use the ‘colours’ side of this marker to indicate if the unit is “battered”.  The test to recover from this morale state is considered an activation and so if successful, the marker can be flipped over to reveal the ‘earth’ side.  Other units, as they complete their activation, an ‘earth’-side chit can be added so all in the game knows that it has been dealt with.

Obviously this method need not be exclusive to these rules and can be useful for many other applications.  It may be simple but effective and one of those hand-slap lightbulb moments which are great to deal with the requirement but embarrassing to believe that you did not think of it earlier!
Posted by DougH at 13:36 14 comments:
Labels: "Lion Rampant", markers, Samurai


To help the local owner of the figure manufacturer Kingsford Miniatures start his business, I bought a bunch and agreed to paint up a mounted unit of the Sengoku era Samurai for him to photo for his gallery page. To be honest, I did not do much research at that time into this conflict so just saw the letter character (meaning ‘great’) was cool enough and I put it on a black background for the sashimono - the small flags attached to the warrior’s back.  I did nothing with the remainder of the collection for the past 7 years and originally thought to use it for DBA.  But with the advent of the ‘Lion Rampant’ rules I became motivated to bring them out of storage.  Needed a shovel as they were deep in the back of the cabinet but I managed.

I am a firm believer in completing both sides of a battle or conflict and I am always a bit tied to the realism of history so I endeavoured to stay to the actual history to gain a matching adversary for the Takeda Katsuyori whose mon -personal/family symbol- was painted on that first unit. I found my historical adversary in Okudaira Sadamasa whose sashimono device is a simple red and white pattern for ease of painting and the mon of a red fan.  His family was killed by Katsuyori who did not appreciate his departing after the death of Katsuyori’s father, Takeda Shingen who had Sadamasa’s family as hostage.  The Okudaira took part in the final campaign against the Takeda in 1582.

I have mounted all my units on bases of circles, ovals and rounds of various sizes which work well for these rules and look quite good in my eyes. I added tufts and model flowers to give a nice organic look to the terrain work. 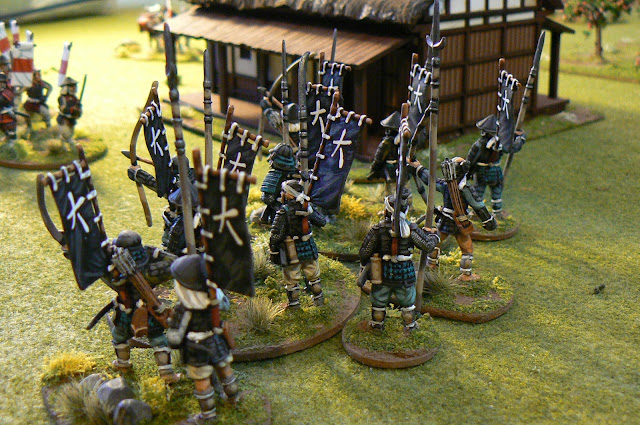 Besides the combat units,  the Okudaira have the addition of a musical party sporting a large uma jirushi standard with the red fan personal symbol which is used also on the conch shell horn-blower's tunic and on the war drum. 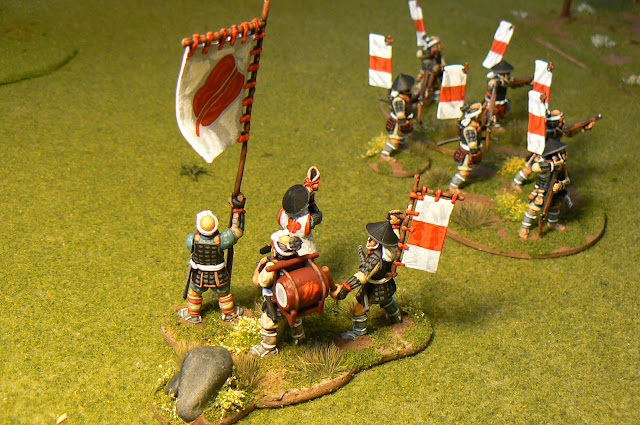 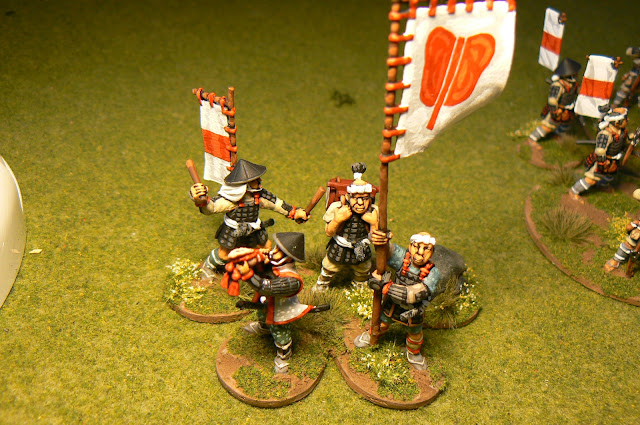 "Great leader, is getting shot at the best course of action??"

Played a great game of "The Men Who Would Be Kings" Osprey rules (TMWWBK) hosted be WillB at the recent club night.  It was an interesting scenario, apparently straight out of the rule book, having, in this case, WillB's  c.1880 era Russians Colonial forces on one end of the table with the British and Imperial forces opposite and both needing to move to the other end to win respectively. The Afghans (under my dubious command) were in the middle, unfriendly to both.

The rules have the players roll up their leaders in a very role-playing fashion. This sometimes provides bonus and...sometimes not.  For instance, one of my Afghan sword-wielding units had a coward for a leader and so could not charge (!) and thus not the most potent of offensive units....

Another unit had a leader smoking hashish (it is assumed) for a separate roll of a d6 each turn determines the units leadership roll - good or poor -whether he was hyper or dulled by the influence!  [ for the record he was super-leader during the entire battle ]

Or the red-clad "regulars", who had an 'idiot' for a leader.  If the commanding player roles a 1 on a d6 should he wish to do anything with this unit, it is not he but the enemy player who commands them.  Obviously then, that player is most likely issue an order contrary to his best benefit!  Of course, should a roll of a 1 be detrimental, I will, more likely than not,  roll it.  And so it was in this game that, not once, but twice (!!), the unit was brought out from the safety of the rooftop into the open for the Russian player (PeterM) to shoot them down. (the quote of the post title is the ranker's response to this action I would add)

Neither Imperialist gained their game winning conditions so the victory went to the Afghans.  Another interesting and fun game with the TMWWBK rules.

What is it with me and my ECW collection?  How many times will I rebase the darn thing?!

Well, OK, this rebasing (the fourth, or is it the fifth time?) is only the pike elements and not the entire collection.  I made the visual/mental error in thinking - regarding my own predilections - that the pike should remain in a regular formation of even ranks and files.  But this basing contrasted with the rest of the collection - another visual "unifying" predilections kicking in, I guess - so I finally decided that the circular basing would indeed work also for the pike.  I had to order for new mdf bases.......

Here is a comparison of the two styles:
As the poses of my old pike units do vary considerably, the irregular pattern now does rather compliments than distracts - in my jaded opinion.   More skirmish-y look also, which is the feel of the rules (a Lion Rampant version or the newer Pikemen's Lament).
I have the 12 pikemen glued onto four bases with a 4 figure, 3, 2, and 1 figure base of different sizes/shapes to allow for any varying number of casualties to be removed.

The interesting visual perception, for me at least,  is it having a much "tighter" formation with the newer circular bases even though the width is but ten percent shorter than the older square style.
Posted by DougH at 10:15 10 comments:
Labels: "Lion Rampant", bases, ECW, musings
Newer Posts Older Posts Home
Subscribe to: Posts (Atom)