Looking through my boxes, I again came across my "Burgundian" army but this time I stopped and took the time to pull it out for a "review".   I have never played with this army,  sigh,  but do remember painting it over the Christmas holidays back in...umm... that would be at the new rental apartment, so 1994.  WHAT?! That is nigh 20 years ago! 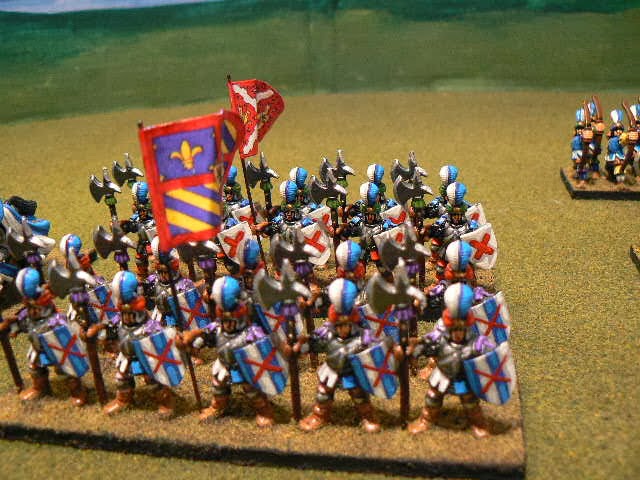 Toys-R-Us, of all places, was having a massive sell-off of the Hasbro 'BattleMasters' game, which had good vs evil fantasy with these 28mm pieces (GW size) which could be placed on large slotta bases on a thin plastic sheet, hexed and printed with landscape and roads. I was told the figures were designed by the Perrys under contract.  Don't know if that is true but they are nice, a little 'stocky' by todays standards however they were designed for kids but still very compatible for today's 28mm scale. 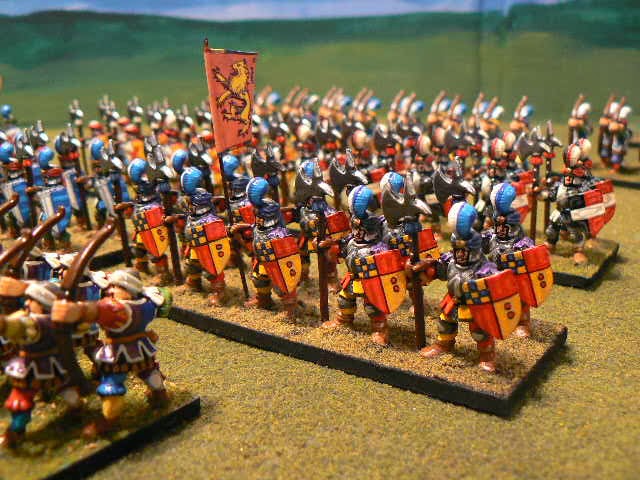 The fantasy elements were sold off or traded, and while not entirely historical, the 'good' side is a blend of late medieval and renaissance which I made into a "Burgundian" force and based for Armati using 12cm wide stands for the heavy infantry and cavalry.

The paint job is a very simple base and heavy highlight technique over which is heavily glossed for that very 'old school' look.  But sometimes simple is good and the army glows on the tabletop. 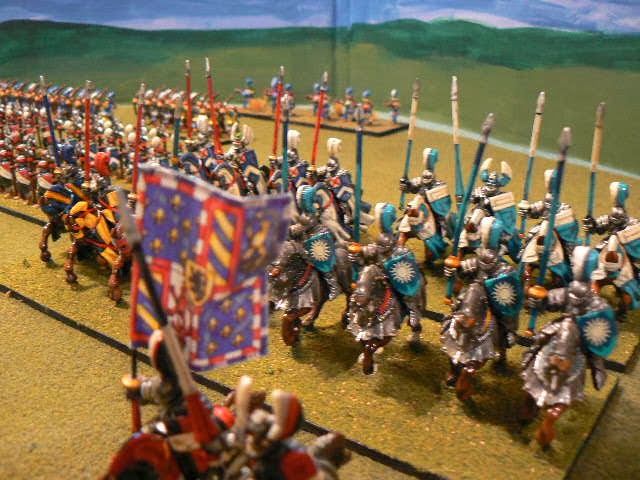 The original game was slotta based.  I removed the slots and used super glue to mount these plastic figures onto wood hardboard bases giving each baseWoodland Scenics flocking (a bit more green than the photos would suggest).  I have been tempted to remove and rebase but nothing or new rules has come along to excite me enough to do that.  It would be simple enough as soaking the wood bases in water would loosen the hold and I would think the figures would come
off quite easily.

But like I have mentioned they have been sitting around for years without use.  Other than the emotional side - that wargamer thing - it might be time to trade it or sell it.
Posted by DougH at 12:02 4 comments:
Labels: minis, musings, Plastics

I finally got around to paint Knuckleduster mounted officers I will use as militia commanders for my ever growing War of 1812 collection. 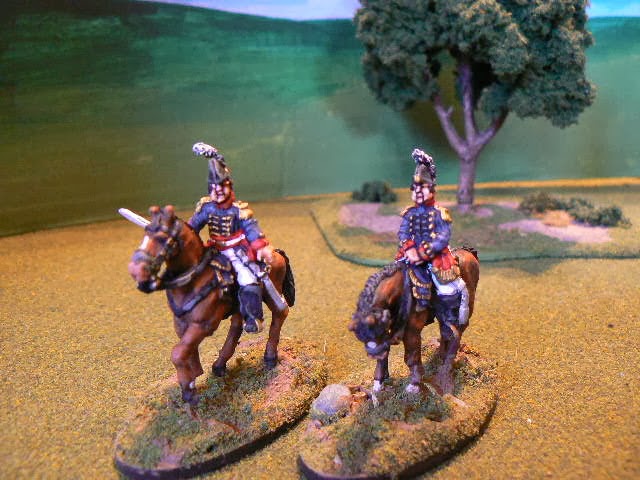 More pics of the game

The year is 1816. With Napoleon finally gone, the Allies could not settle their affairs and so Austria and Prussia marched against each other.  Near the small village of Konigsgratz, the two armies clashed for the first time.

I traveled across the border and made the trip to Seattle to the 'Drumbeat' day-long meet to introduce my newly painted Prussians in this scenario against Seth's Austrians. There is an old wargaming axiom that newly painted units quite often perform poorly their first game on the table.  Would a whole army do the same?

As we set up the game, it became apparent that the room had more games than needed players, and thus only four guys were available for the game. For the game we were envisioning, not that many. However we plowed on.

I am of mixed mind about the game, event and results of the game and so will not make comment one way or the other.   While one of the players had issues with the rules but as I think he plays only one other set of rules too much - one could say exclusively - as to cloud any perspective, the other players seemed to understand the concept and play within it.  Poor "Thielemann" commanding the Prussian left flank against half the Austro-Bavarian army doubted my compliments, demonstrating that he had lost half his command and the remainder was weak. "Yes", I said,"but by doing so you have kept the Austrian reserves on this side of the table and are allowing the Prussians on the other wing to dominate."  [ or will have, had we not packed in early to make the table available ]

But this is my point of this style of war game, it is not the tactics, but the troop management and use of reserves.  Too bad the game was so short as not to allow this to become apparent. 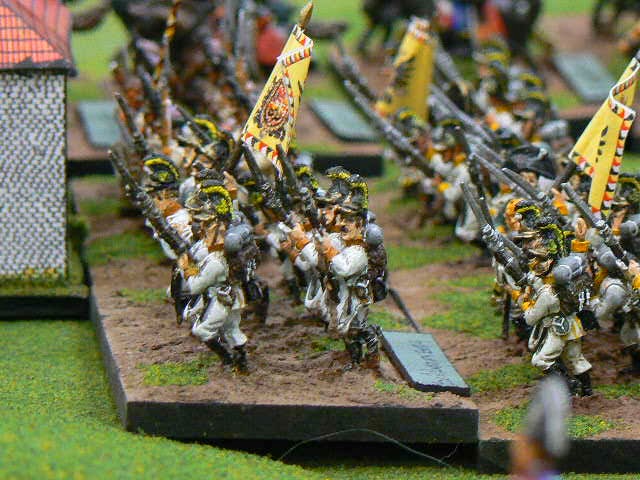 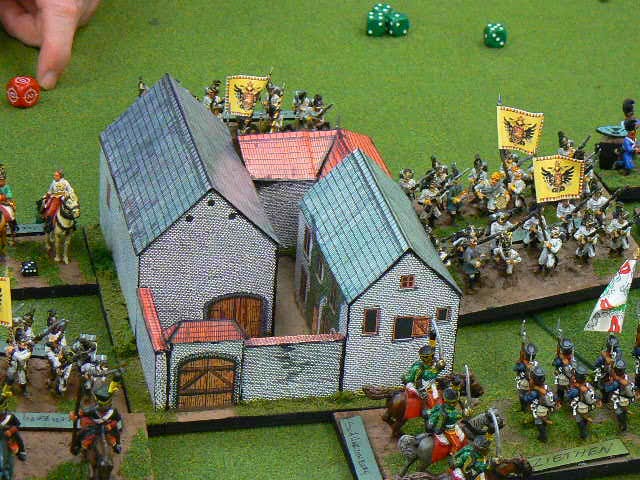 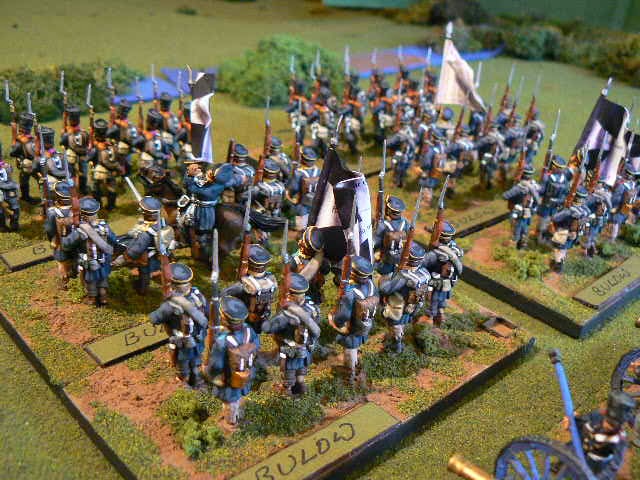 Finally finished the big push to get the other half of my Prussian army completed.  It was 'over-the-holidays' project that, because of the flu, and well, the holidays, I could not complete.  Actually I intended only to have enough to replay the Battle of Ligny, but as I was completing ALL the Landwehr (more anon) I went on and did the additional 4 elements of Bulow's Corps (which did not participate at Ligny) to do the whole lot.

In all I have done 160 Landwehr and then the 40 regulars of Bulow's, in addition to all the command figures for the army.  The Landwehr are plastic Warlord which have a metal command of three with 9 sprues of 3 figures.  For good or bad, the plastic figures have nothing to glue and are complete. Thus not much variation.  Doing my usual "do-it-like-HenryFord" production technique and work in mass, I arranged the Landwehr in the three groups, each of about 45 in the same pose. Yes, a bit boring but much quicker.  The more diverse command which included their pack of casualties which I bent to be more upright some of which became flag-bearers, I did as the final group.

The same pose Landwehr I completed mostly in the same color scheme but perhaps a third I did variation such as a different colored grey roll or canteen cover.  Just enough to fool the eye to suggest greater variety for the poorly equipped militia.

Once all basically painted, I distributed the poses for each unit/element.  That done, I could then paint the individual unit distinctions as the Landwehr had a different color of collar, cap band and sometimes the cuff for each province. The seniority was indicated by the shoulder strap.


Bulow's corps of about 31,000 did not participate in the 100 Days Campaign's earlier battles and so went into Waterloo/laBelleAlliance relatively fresh.  With the ratios I am employing,the two elements on the left - the 10th IR with the red flag and the 1st Neumark - make up Hake's Brigade (a Prussian Division), with Ryssel's, Losthin's, and Hiller's Brigades (l-r)  the infantry portion of the corps.  The 6th Hussars and 2nd Pom. Ldw cavalry make up Pz.Wilhelm's command and the artillery finish off the corps.  The internal organization is available for campaign purposes should a player wish to detach troops but for the usual game, all 14 elements will be commanded by one player.

Some of the different units of Bulow's Corps:


While the Perry's have a large and very nice selection of French Generals and Marshals, and a great Russian command pack, and the required British/Allies commanders, they have only produced one (!) pack of Prussian Generals!

The local game store had another of its big sales awhile back and I found on sale a pack of Old Glory Prussian officers and another of Generals. But I debated. OG horses are basically horrible.  And the sculpts are, at times, questionable.  However, I bit the bullet knowing I had some spare horses which I could use.

Whew.  Finally finished the Prussians.  It was not, as I feared, an endless sea of dark blue and black.  While not flashy, which I like, they were good to paint.