The development of the DSM-720 AFV.....
"Here are some parts", says WillB as he presented me with the remnants of his model building of 1:56 vehicles.  "Tracks of a half-track option I didn't use, some miscellanous bits and pieces, and the double turret of the Russian early war t-26.  Have fun and lets see what you come up with....."
No particular engineering plan.  Rivet-counters might cringe...
I did buy a package of various thicknesses of styrene sheets and had some thin 'L' angle.  The latter I indented with a sharp tool so to look like the existing rivets in seen on the turrets.   The rest is just what I could get off the sprues except for the 'engine top' which is a chunk of 'supports' I kept from the 3D models awhile back. 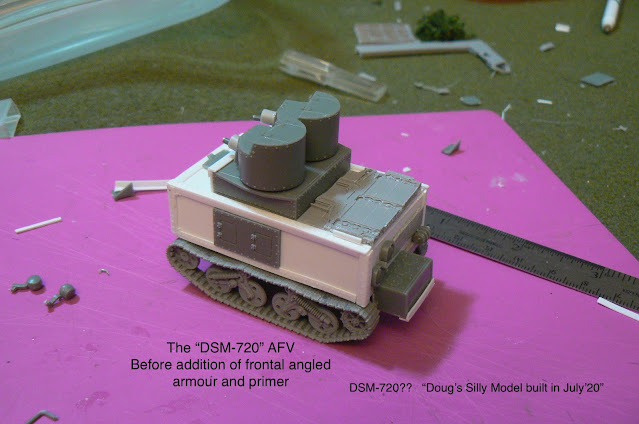 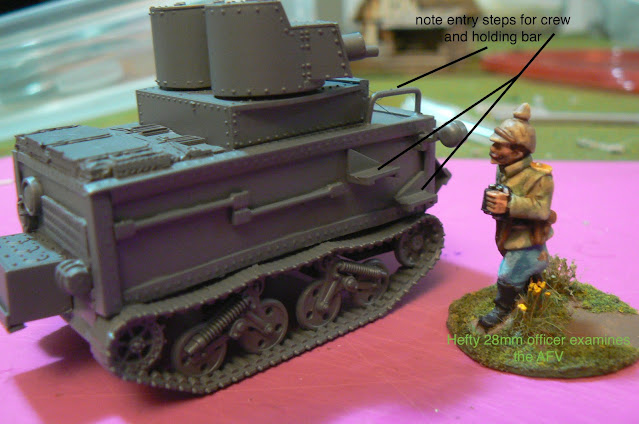 While I did suggest no particular engineering plan I did think of some of the ergonomics of the design.  The machine gunners would be standing,  all the better to be able to spin around,  and with the driver seated tightly between for example.  As the two turrets are directly from the historical t-26 I need not justify that arrangement. 😏
The angled 'iron' plates at the front were added as "initial tests showed additional armour was required from direct rifle fire and the angle of the armour plates increased protection. The angled plates also will assist with incline maneuvering." { actually I thought the model looked kinda like silly box....so I altered the look of it }
The 'report' further states "the weight of the added frontal armour is countered by the attached cooking stove having three separate lids for each of the crew to boil meals at the same time using the heat of recent engine heat."  { Don't have a clue what the original part was but explains this bit of addition } 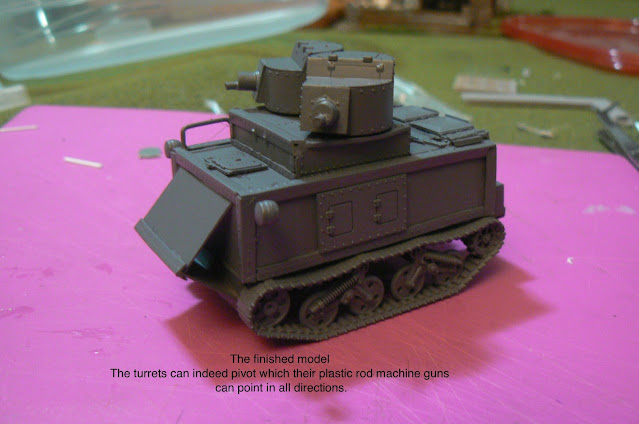 As usual I made this fictional AFV  just for the creative exercise.
Posted by DougH at 22:03 8 comments:
Labels: modelling, Plastics, the silly side

a 'Gain the Hay' Campaign engagement

…despite two small ‘victories’ against the French in the previous 'few hours of this campaign' played out using the Osprey "Rebels and Patriots" by WillB as the French CO,  the Nassau forces (historically a small German state adding its military force to Wellington’s Allied Army in 1815)  had decided to fall back to this picked second position defensive hedge position beside a small woods to protect the hay of the nearby field from French use…

His elites were met with strong musket fire and quickly put hors-de-combat.  The other French units advancing until, as a body, they all halted. (for all three units I failed their activations); however, the German musket fire was very ineffectual during this time (my 36 dice with no hits at all!).

While the dragoons finally took the low hedge, the Nassau 3rd Line Company calmly and without disorder, put a volley into the poor dragoons, all but destroying them. The remaining French were forced to concede due to casualties sustained overall, and had to withdraw.

Their horses will not dine on the hay tonight.

No big write up. Just a test of the new Blogger interface....

My French Napoleonic dismounted cuirassiers - converted from Perrys plastic offerings of the dismounted poses from their Dragoon box set. A photo shot of the foot cuirassiers, most of whom are without their heavy armour. 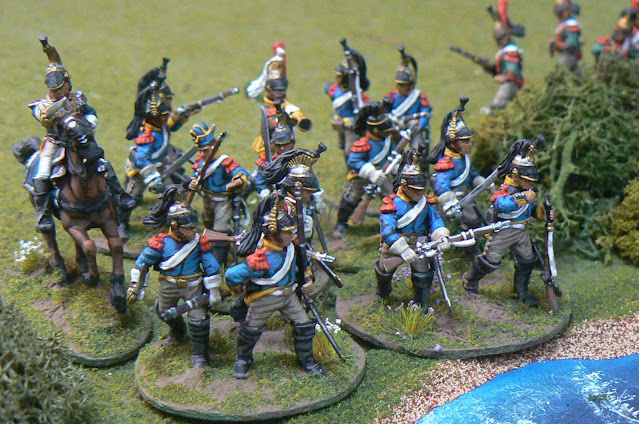 Some shots of my cavalry from the 100 Days/Waterloo Campaign 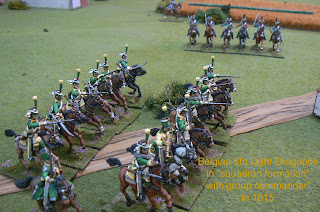 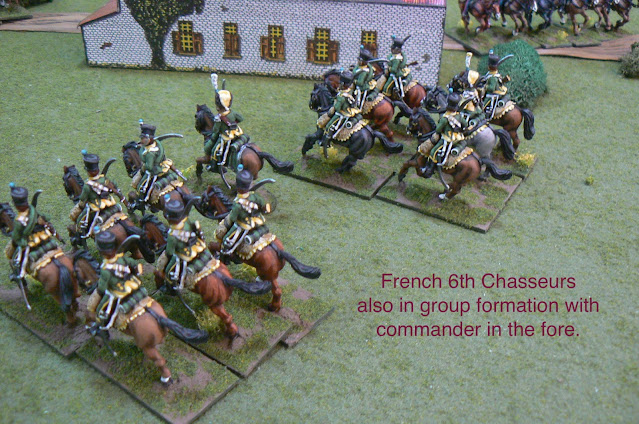 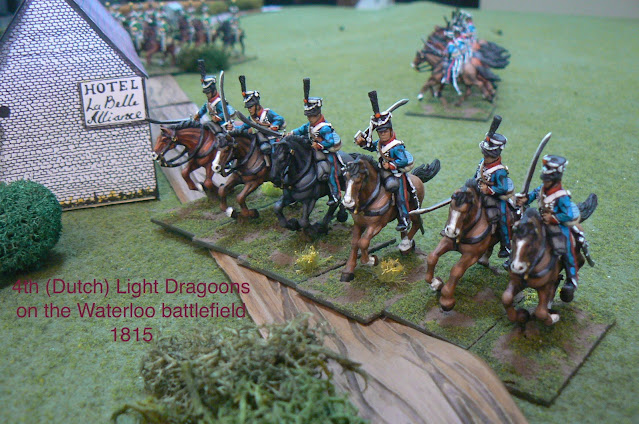 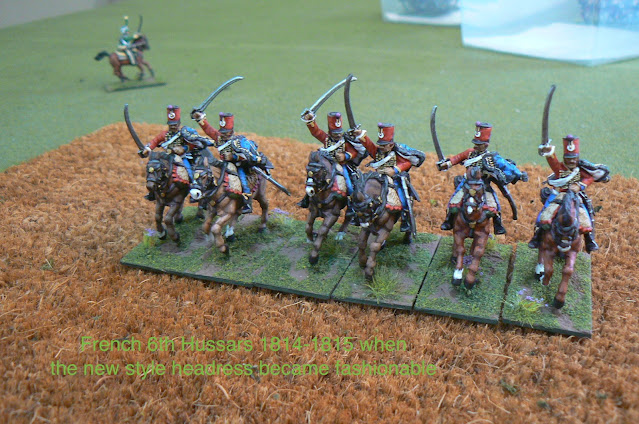 All are plastic Perrys [with the exception of the Dutch horses which are Fireforge medievals] and with the Dutch and Belgians heavily converted by me.

Trying to come to terms with the new Blogger interface.  However I did discover new edit tool which allows type directly on the photo.  Very old, but new to me ...I am still a Luddite I must admit.

a quick retelling of the head(less) unit of plastics… 1. I had 9 Perry Napoleonic French plastics as a unit ready to paint primed in black….but then I tweaked to the Portuguese Legion in Russia used a version of the Bardin lapel and had crossbelts for all members AND were in the unique brown uniform. Cool! .....so off with their heads and new ones glued on.... 2. But I already have the Portuguese well represented in my big-battle army, and they were only in Russia and if mounted as a skirmish scale unit, does not solve my need for an opposition for the dismounted dragoons. Looking at the picture books of uniforms, I spot the Neapolitans. How about representing the “elite” unit to be beside my existing Neap. Lights in the big-battle collection? Excellent. ....so off with their heads….and new ones glued on...... 3. Whoops, further research shows that they did not wear the shako with cords - the selection I had glued on. ....so off with their heads.... [the French guillotine didn't chop off this many heads, did it?] 4. The Neapolitan heads are now with covered shakos - so I didn't need to depict their shield shaped badge! I even did a color list for this unit. But then I saw an illustration of the Nassauers at Waterloo. My mind raced. If I used the ones I have already have for the big-battle games, re-basing them and adding these nine, I could get a decent number to make a “Rebels and Patriots” force and face them against my dismounted dragoons! .......so, yes, off with their heads, once again........ 5. But hold on, the numbers don't quite work. I am missing one to make a complete unit. Darn. However, I thought, I do need a commander and the opposing French commander is mounted. So, find a spare mounted figure. Luckily I had been gifted a sprue of Warlord British heavies. With no small amount of scraping, a new pistol carrying arm and a new hussar fur-cap wearing head leader. I had my unit done so no more removing of heads and this time I actually painted the buggers. The photo shows the Nassauer grenadiers with the new figures blended in. 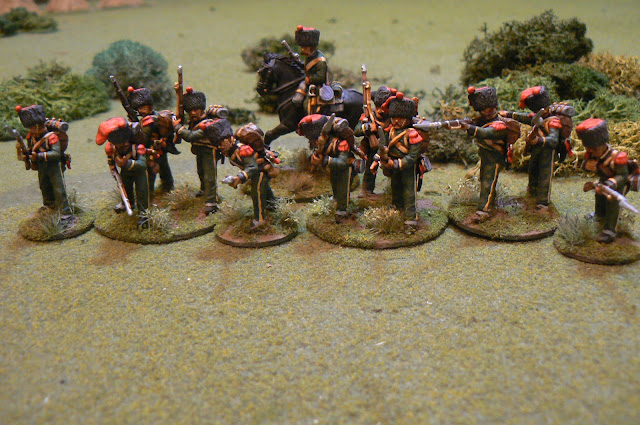 Does anyone else do this or do you plan everything in advance? {smile} -------------------- Edit note: as Blogger has changed its interface and I am having technical difficulties trying to understand how to do what new to do [I am currently using the limited time 'old school version' which is why it reads so bad] I may end up quitting on this blogging thing. If I do, I hope you have enjoyed my personal recording of the recollections of my wargame activities.
Posted by DougH at 23:51 10 comments:
Labels: musings, Napoleonics, Plastics

I had only a few full torso WW2 Japanese infantry left on the sprues and since a few weeks ago now I was still on the “What a Tanker” infantry anti-tank theme, I thought I use them to create essentially a suicide AT squad armed with some ‘lunge mines’ supplied. Two of them have those weapons on a long stick, one has his in the hand (I used the pole elsewhere!) and the fourth is using a rifle to keep the tank commander ‘buttoned-up’ making it harder for the target tank to see these infantry threats. So to explain these new Japanese warriors AND, more critically, the use of an old British Matilda tank, AND further, to show off my new Japanese Plasticraft building, I have this Alt-History story: April 1946, U.S. President Truman was not delivered the atomic bomb and so had to defeat the still defiant Japan the old fashion way. Operation Coronet is almost two months old with Tokyo and adjacent areas secured but pockets of resistance needed to be removed. While a relatively small part of this operation, the Australian contribution was tasked toward one of these areas. Sergeant Forlorn’s old Matilda tank had become separated from its infantry support and had entered a small village seemingly untouched by the destruction of war…. Inside the Matty stopped before the village, a conversation rages: “Where are the bloomin’ infantry?!” “lost them back a ways” “Why didn’t you bloody say?!” “you seemed happy looking at the cherry blossoms” “Well, step on it and get past this bloody village!” 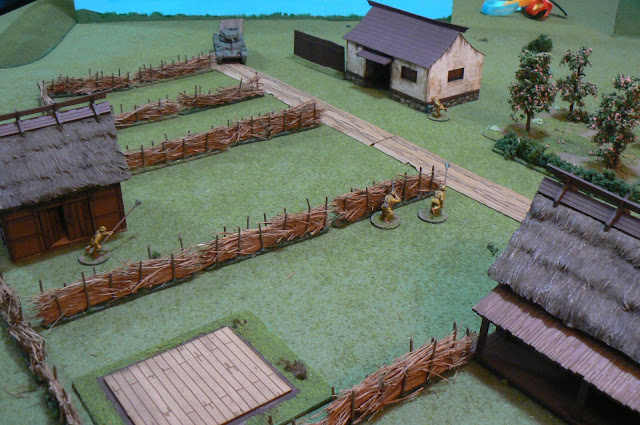 The engine of the Matty sputtered and then roared to life (rolling doubled ones for first Move Dice followed by rolling 10 inches for the Second!). Hearing the tank, Ieko sprang from his position behind the house’s corner while yelling “For the Emperor!”, slipped on the wet ground [I only rolling 3(inches) with 2d6] yet reached the tank and aimed his thrust with the mine held in his hand to the side of the green monster. 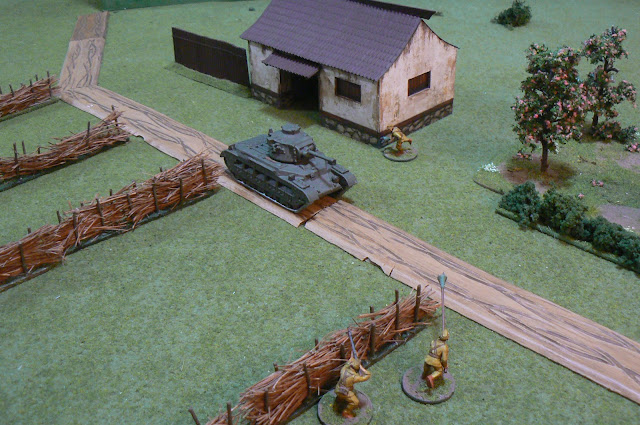 His aim (double sixes! …my rather erratic and dramatic dice rolling trend continues…) adds 2 more Strike Dice to his attack. 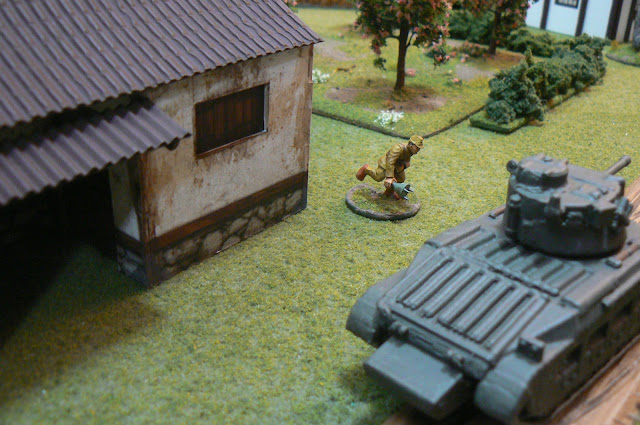 “Its a Kamikaze!” is all the C.O. who was in the open hatch could say before the sharpshooter with the rifle put a bullet into his head. [ I must say my rolling of the dice in this case was perfect for this event to occur] The Matty is now down to three Command Dice but luckily the driver was composed enough [actually I rolled a Drive Dice] and the tank went into reverse and the gunner acquired the shooter but could not do more. Seeing that his chance to finish off the tank was fading as it slowly reversed away from him, Ichiro sprang from his hiding spot positioned behind the straw fence near the sharpshooter and ran up the road. “Bansai!” His sacrifice shook the tank crew further having one further Command Dice lost. 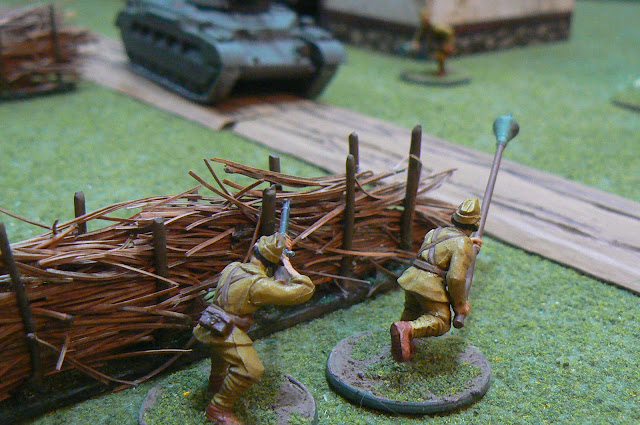 Kenso, in the door of the rice barn, needed to be much closer and so hoped to move into a better position without being spotted but his nerves …and my dice rolling…prevented his feet from moving. 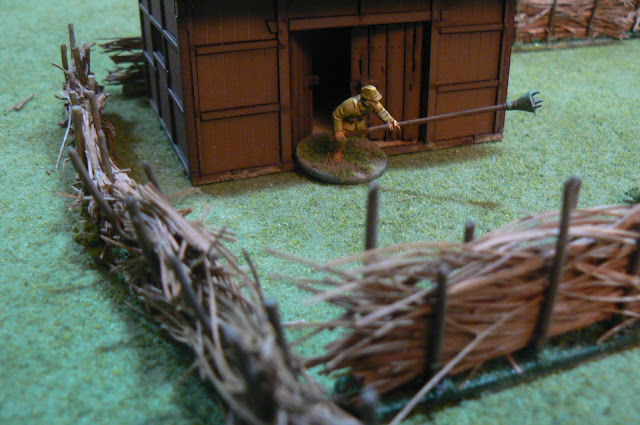 Meanwhile the Matilda slowly moved backward from the village. Kenso finally called to the Emperor for help and I rolled a 1,2,3,4,5,6 combo! Kenso acquired the location for the tank, ran as few have [ I rolled 20 (inches) on 4d6 !] - having converted the Wild (6) into an extra “Drive/Move Die - which had him reach the distant tank and thrust his lunge mine [successful aim roll] but alas, the blast, while killing Kenso, did little to the armour of the Matilda. 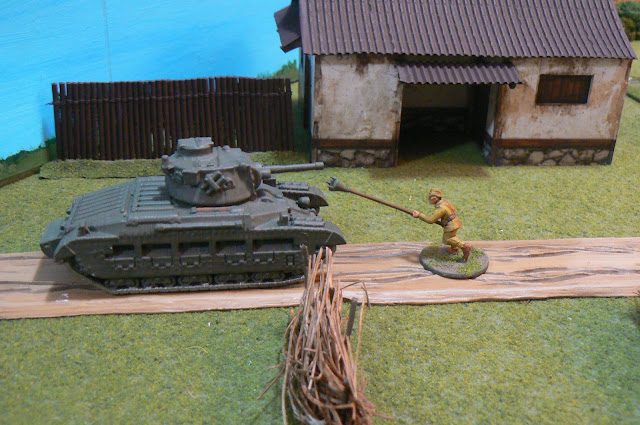 The sharpshooter, lowered his rifle (not rolling the dice for him to fire) and mourned the loss of his comrades, as the green beast moved away….
Posted by DougH at 23:35 2 comments:
Labels: blogging, buildings, fictional battles, The Lost Matilda, WAT, WW2
Newer Posts Older Posts Home
Subscribe to: Posts (Atom)