For all three of you who follow my blog, I will have a bit of a break for a month or so as vacation preparations, and events out of town have or will limit any blog entries.

I will note, however, my disappointment at the ill-timed closure of the National Army Museum in Chelsea, London, England as of the end of this month and exactly one week before arrival in London on my vacation! For a military buff as myself that is a major disappointment and much akin to the mournful despair of the devout Roman Catholic priest finding out St Peter's will be closed during his only possible visit to the Vatican!
My wife however is in quiet glee no doubt knowing it is one less boring museum she must endure.....

Anyway, I will hopefully return with a full report on the "Enfilade" convention in Washington State for the end of May.

I started by asking myself "Can you get shot down in space??"  I mean, well, in every air game I play in, I do indeed get shot down. However as this is space, can one get shot down if there is no down?  No was the conclusion but, as a fellow player suggested, I could well get shot up ! 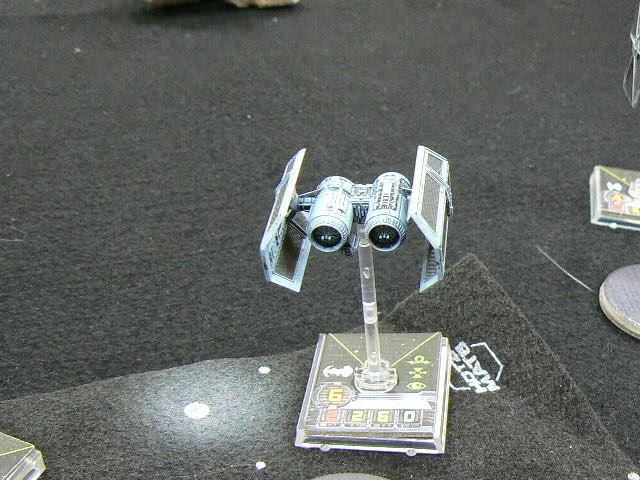 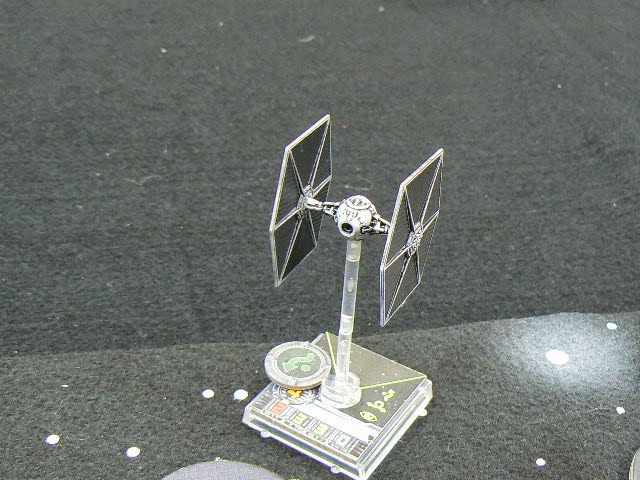 Yup, we of the Imperium believed the damnable Luke Skywalker might be piloting one of the Rebel craft in the  X-Wing game in which I participated  during the local 'Trumpeter Salute" convention held recently.  I commanded three ships, two Tie Fighters and a bomber for a total of 50 points.  I think Luke was near 50 points by himself!  While the four other players also were limited to 50 points  this still could result in a variety of ships and qualities.  Of course this included the Millinemium Falcon.  Big sucker that!  With a huge number of shields and hull ! 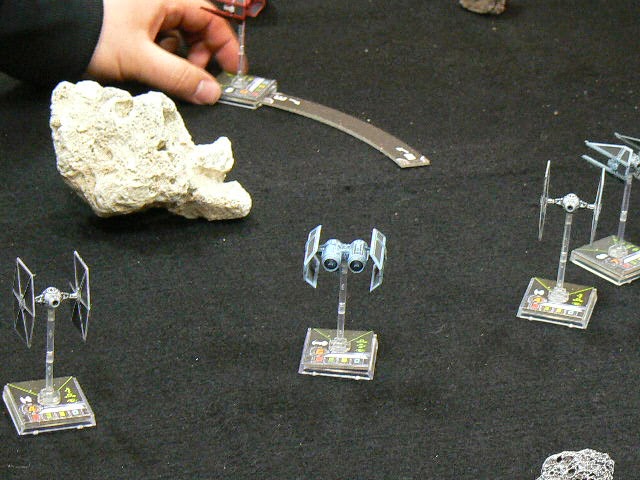 The game was fun.  The rules relatively easy to pick up and the game masters were very patient and helpful explaining things.  I can see the appeal.  During the game the movie sound effects came from the GM's iPhone !

Oh, by the way, I lost two of the three ships with the other only one mere hit away from destruction. So my space piloting IS the same as my flying!  Thankfully I was not the only one with such damage and Luke was indeed blown into space.  Once the points were counted, we of the Darth Vader crowd won with the thinnest of margins by two points.

As an aside, I was amused by the reaction of a twenty-something player in the game when I said I saw the original Star Wars movie in the theater when it first showed in 1977.  In awe of the experience I had of that bit of history or simply of my age, I did not ask.......

The second game of this battle at the "Trumpeter Salute" convention with new players with the exception of Steve A. who was now on the Prussian side as Pirch. I played the Prussian Ziethen with the tough task of defending the Ligne Stream.
As we had fewer players, I left the eastern side of the battle on the table, but we did not use Thielemann's or Grouchy's commands.  With the experience of the previous game, I understand why many wargame scenarios do not use this side of the battle. 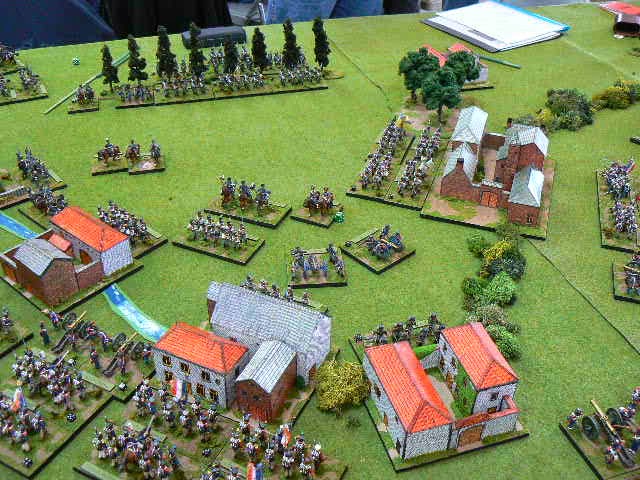 The topography of the battlefield was very low, rolling farmland, virtually flat, so no hills were needed. Initially Napoleon was unaware of Pirch's Corps as a gentle rise of ground hid his force from the French.  To recreate this and to follow the maps of deployment, I allowed, as I did in the first game, these Prussians to be placed on the table behind a row of trees to mark the area after the French have done their first turn.  However in both cases the French did not appear to be overly surprised....

In both games I tried to set up the forces as accurately as possible given that we are but dealing with miniatures and all. 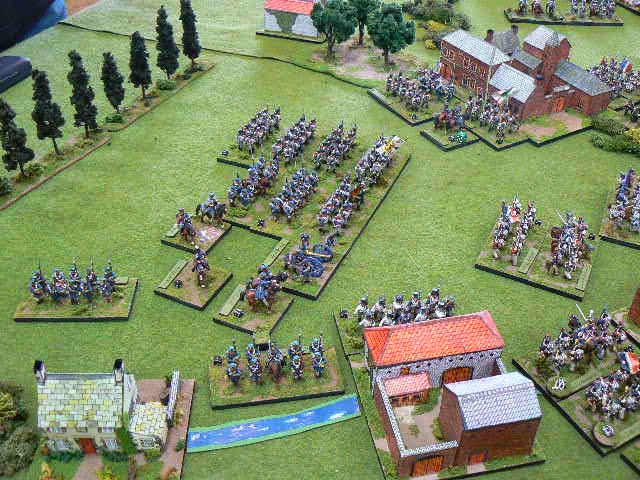 This game differed only from the first by a more aggressive Vandamme but less aggressive Gerard who was charged with the task of taking the village of Ligny.  In this game the army reserves of the Old/Middle Guard and Milhaud's heavy horse moved back and forth not knowing with which attack to follow or support.  While the French used the Young Guard to help in the village assaults in both games, the players did not use the Old Guard as a hammer but as support, following interestingly, the historical precedence.

Again the historically imposed time limit cut the battle short. In this game, however, Ziethen managed to keep Ligny and Ste.Armand la Haye villages thereby holding open the flanks of Pirch's advancing corps to deal with the French who crossed over in the center.  How that fight would have ended is for speculation. If we wargamers were actually REAL commanders, the Prussians would have called it a day turns before we concluded after giving the French a bloody nose in order to have daylight to maneuver and retire while Pirch's Corps was whole and Ziethen's flanks were still intact. But it gives me a lesson, which I really should have already known with my years in the hobby, that precise victory conditions must be listed or players will just continue to push in more troops in order to roll dice yet one more time.


The local big convention of 'Trumpeter Salute' gave me the opportunity to playtest the revised rules with a new group of wargamers.  With Seth unfortunately unable to make it up due to workload, I decided to do not one but two tries at the historical battle of Ligny -  the OTHER big battle of the Waterloo campaign.

The first try was Saturday night with six players.  I did my somewhat lengthy preamble using now a point form explanation of the concept and rules.  With an hour set up and about an hour to get the players together and familiar with rules we started.  I must say with six complete rookies, we had a fair conclusion with the self imposed seven turns representing the approximately seven hour battle until darkness ended it historically. We were finished the seven turns by 11 pm so the game was 3 hours real time in length.

In terms of historic action, the game was a bit behind in the timing but I thought the Prussians could have declared a retreat a turn or two previous so it is close to the real battle perhaps.  Good to know that the rules are that close to recreate the historic action. As a note, Game 2 was similar in timing!  However the rules are still in development an not even close to be written in any coherent way. So don't ask for them!


The game was a great way to discover the military difficulties the commander had in this battle as it is hard to imagine the reasons for some of the events.  For example --  why was so little action between Grouchy and Thielemann in the east.  But as the photo above shows, the Prussians were there in force and well placed behind difficult terrain of small villages and marshy stream and woods.  Not very good going for Grouchy's mostly cavalry force. They could not attack without disorder and the Prussians would be silly to come out and attack the French cavalry in the open ground. THAT is why there was so little action in this area of the battlefield. I did not tell the players about the battle and the historical actions ahead of time, but they acted in kind to the historical model nonetheless.

The above photo shows the western part of the battlefield which held the major action. As you can see the Prussians held a wedged shaped defensive position dictated by the shape of the largely uncrossable Ligne Stream but it created a salient into which the Prussians were confined and could be shelled from several directions as the tabletop action would prove.

As with the real battle, the game seemed to focus on the large village of Ligny. I used my "Hougomont" complex to represent this village which could be  defended/attacked by two elements but which could not do any 'east-west' attacks; only 'north-south'.  This made it two wide in essence and made for continued fighting as the French need to clear both sides.  In the game, as in the real battle, it went back and forth for many turns/hours.


The battle was concluded without any Prussian retreat.  It was more the wargamer "keep playing until all dead" than a campaign affair when a player will "try to keep something to fight another day".  Thus the Prussians stuck around too long and not follow the historic actions but I could see it would work well and have rules for it .
The new artillery rules worked (!), and after the initial trials, they went extremely smoothly and seemed to have the right lethality.
All in all, the Battle of Ligny was well reenacted.

The paper buildings of Waterloo

With perhaps the same construction techniques as the contractors of new homes,  I went about building more of the paper buildings needed for my 100 Days Campaign project.
Actually paper buildings do have an advantage of weight, which for me was their primary attribute but also of being "painted"  or almost so. Yes the edging needed some touch up but easy enough.

While I have some ten of these Belgian/French farmhouse complexes to represent the many villages fought over in Napoleonic battles, the Waterloo specific ones are, of course, Hougomont which I completed previously, La Haye Sainte  and La Belle Alliance hotel, from which Blucher named the battle, and Fischermont on the Allies left flank. 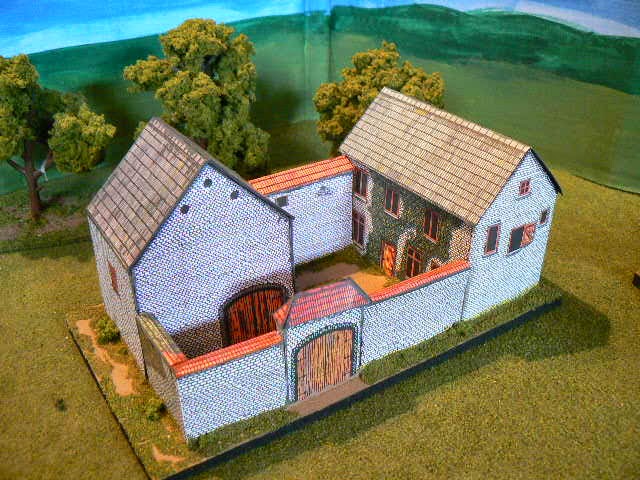 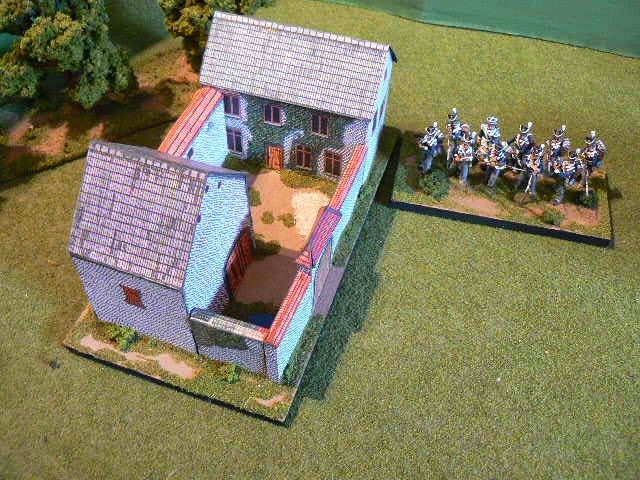 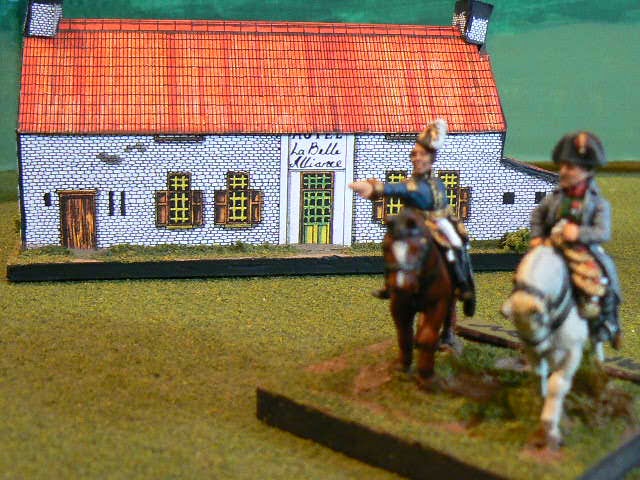 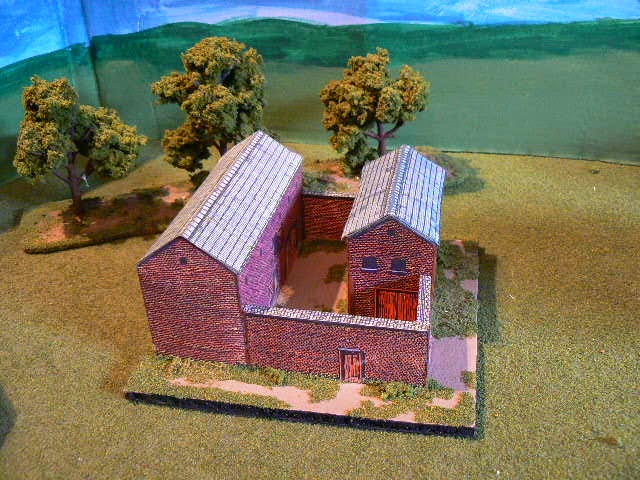 LHS is cut down from the original as even scaled to 15mm, had too large a footprint on the table.  While all the buildings still do, they were an important part of the Battle of Waterloo and hopefully look good on the table.