Dedication:
for BillS - thanks for the Osprey

“The Earl of Rockforth is dead, your Majesty”
“Who?”, asks the King.
“Percy Hewes, 4th Earl of Rockforth, Sire.  Holdings along the River Tercey”
“Why doth the name seem familiar?”
“Your quoits partner yesterday?” diffidently suggests the clerk.
“Ah yes”, recalls the King, “hansome young man but not very…Is he dead?”
“Ah, no, Sire, his father;  a great supporter of your divine Majesty”
“Must continue that. Send the young man. Oh and give him a chest of silver.”
“The silver will require a guard, Sire”
“Yes, yes, Hastings will do and also give him that useless Nerne and his dragoons”

Thus Howard Hewes, 5th Earl of Rockforth, escorted by a unit of cuirassiers under Hastings and a unit of dragoons we enter our second season of fictional campaigning along the Tercey during the times of the English Civil War.  I am using my very old collection of Foundry figures painted almost 30 years ago and now using the new The Pikemen’s Lament rules, I hope to record my occasional solo games.

(prologue)
“My Lord in Heaven, you challenge me so” Hastings muttered as a curse to his misfortune. He was informed that Hewes was ‘indisposed’  within the travelling sedan and thus will be commanding from within its confines.  A rather awkward arrangement but one the new Earl insisted upon (or perhaps more myself wanting to see this model upon the table, and rolling a rather very poorly for the new Earl’s officer traits per the rules….”ineffectual” he is….)

A moment after returning to his unit during this rest at the inn at Henry's Ford near the edge of the shire,  Hastings spotted the mass of riders galloping toward him with raised swords.  He expected little help from the dragoons and hoped his call for assistance would ‘urry.  His mood lightened slightly over this clever pun, but would Edward Urry’s elite cavalry arrive in time?

His opponent, Haribald Blare with his unit of aggressive horsemen, was tasked by Lord Brooke to capture and/or kill the new Earl and obtain the chest of silver reported to be with him.  Blare was given a unit of commanded shot selected from Brooke’s own unit and shortly an elite unit of Lordship’s pikemen would follow.

With the new The Pikemen’s Lament rules in hand, I began my new campaign with a small game  with support coming on a turn decided by dice.

Rather than randomly roll for each officer’s traits per the rules, I have given each of my available commanders a trait from the chart but based upon my own impression upon the look of the figure itself.  While we have discovered Howard Hewes is a recluse in his sedan chair,  Blare is a “careless” officer and will charge any enemy without question ( an automatic wild charge in having a “careless” officer in an aggressive unit! )

It was thought the advantage in command by Blare would assist in the point differential ....and that my math was terrible..…

Immediately Blare orders his horsemen into a charge against Hasting’s Cuirassiers ( he being ‘careless’ with a wild charge unit makes it automatic! ).  Hastings order a counter-attack and for two turns, each side in turn attacks with confidence each time, in a frenzy of sword cuts.  Meanwhile, the Commanded Shot of Brooke and the dragoons of Nerne under the ineffectual command of Hewes (giving no additional help to the dice) move to face across the field protected by rock walls. The cattle who rather stared in mute indifference to the actions of the cavalry, bolted upon finally hearing the first firing of shot, weak that it was, and moo-ved away.

It is at this point my dubious dice rolling comes into serious play as I roll double ones for Blare’s activation and a further roll of a 1 has this unit pull out from the action ( as dictated in the rule’s chart).  At the same time, Hewes’ activation has Urry’s Horse come on with…wait for it…a double six activation roll! Thus Urry’s unit gains a +1 morale bonus.

Brooke’s veteran pike have now entered the battlefield and the Commanded Shot retreat move to its protection as both Urry’s and Hasting’s horse converge.  Nerne’s dragoons again fail their activation - 5 of the 8 attempts during the game!

The pike go into close order while the commanded shot start their desultory fire on Urry’s boys who have moved up and started several rounds of caracole fire on the pike.  The pike hold their own and so the pistolers do not force the issue.  Several minutes silence on the battlefield now commence … all the initial fire activations by both sides failed for three turns in a row!  This stand-off continued until surprisingly Nerne’s Dragoons finally entered into range of Brooke’s immobile pike. While not forcing it into morale failure, it did whittle away causing casualties.

Foregoing the caracole tactics, Urry’s elite trotters attacked the commanded shot virtually destroying them while Hastings unit now at half strength but full of vigour charged the pike who sustained more casualties, forcing it back and out of it’s close order formation after giving Hastings’ cuirassiers many hits from it’s wall of pike.

However the battle was effectively over.  Both Brooke’s units failed their activation, hurt as they were, with the pike rolling double 1’s ( I honestly am the worst of die rollers ) and as a result of the rule’s chart effect, it fled down the road with Urry’s Horse merrily chasing them down.
Thus the initial clash of the 2nd Tercey campaign was a complete Rockforth victory. Howard Hewes the 5th Earl, can now continue in his late father’s footsteps and with the chest of silver safe, to form an army to fight Brooke’s forces in the near future. 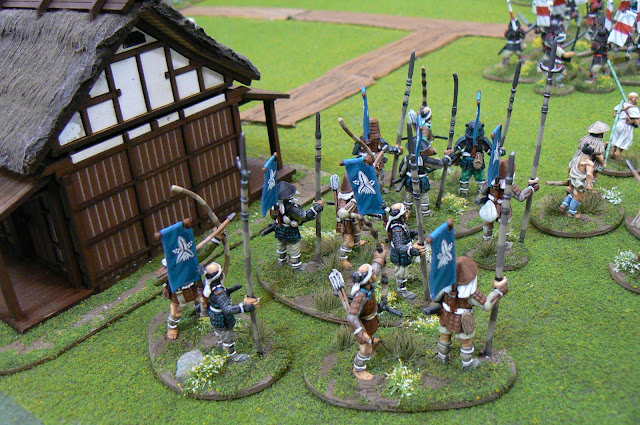 With the monthly club night, I brought out my newly finished Samurai collection for a go using ‘Katana Rampant’  rules.  Actually these are but the straight Lion Rampant rules with the addition of the  'handgonne' supplement for the use of the teppo (arquebus) units.  After reading comments in the intro section of my newly acquired ‘The Pikemen’s Lament’ (thanks Bill!) in which it was suggested to play on smaller tables to “get at it”; a sediment dear to my heart.  It was thus that we played on a 3 foot square mat using 24 point clans (read: retinues) I mean really, how many turns/time is wasted just moving our little soldiers to attack where everyone, both attacker and defender know where they will but must trudge across vast expanses of table 6” at a time. Especially with the LR style of game, this is not assured in any case so one can have opposing units close together without too much tactical loss.  This was certainly evident as we played two games of the same scenario with two different outcomes due to activation.

The scenario loosely based on one of the missions in TPL which has in this case a poorly guarded umijirushi personal standard and drummers of Okudaira Sadamasa  attempted capture by the Takeda.  Whichever side could ‘guide’ the drummers and standard-bearer off the table to their side wins.

ColinU and KevinA each took half the Takeda (black back-flags) and PeterM and myself took the Okudaira   (red/white back-flags) with everyone using the rule’s failed activation each…which everyone seemed to do quite often and sometimes together during a turn!

The first game the Takeda fended off the Okudaira reclaiming efforts, in the second, the reverse was basically the case with my newly painted half-retinue of Oyamada (with the blue back-flags) offering more distraction than help to either side.

While the table was small, but other than having units retreat off table a bit too easily, the action was not too crowded and indeed to me, felt right for the game.  The 3” keep-your-distance controversial rule was not employed and did not hinder the action which was typically fast and chaotic.