40K Battle of the Comm-Tower


ChrisO having run a game of the Lord of the Rings the month before (the poor boy can only afford the time for one game during a month with work, wife and kids and their sports) converted Warhammer 40K stats to that for a favourite LotR rules so to have a go with our old 'veteran' 40K troops — four of us providing the troops not having brought out these guys for some 20+ years!
Interesting scenario but, as usual, the dice rolling made things a bit one-sided as the Imperial Guard ‘patrols’ were not as effective,  not allowing the defenders of the communications tower to start shooting earlier and not having our reserves did not enter at an earlier turn;  and that, due to poor dice rolling (especially by me… as usual…) we could not hurt the oncoming Space Marines.   [Yes, it was a  40K “good vs. good” engagement.]

I was happy to get my Valhallans (Russian looking chaps) on the table together with the slightly more recently painted plastic Cadians who I made into futuristic-ultra-modern  “United Nations Peacekeeping Force”  by scraping off all the Imperial Eagle logos and painting the armour bits in bright blue over camouflage uniforms. ( you can see them in the photo above ).  Can’t take this 40K stuff too seriously…….

Having a holiday Monday available,   I invited some of the boys over for a “get them out of the box if you got ‘em” or in other words  "Bring You Own 'Battle'"  medieval tilt using Lion Rampant.  There were 14th century types, a 11th C. “El Cid” contingent, a Lord of the Rings force, and a War of the Roses retinue!
Did not really matter as they did great slaughter on the fictional Crypt Hill.

The battle scenario was set up by the players themselves as the respective sides could pick a, b or c options and then I would compare and match these maneuvers to prepared maps of my table.  Thus a very different set up to the usual bland and uninspiring  “You guys on that side and we on this side.  Start 8 inches on the table.” game.
Also introduced on the moment was my card system so each player was given a number of shuffled playing cards equal to the number of units he currently deployed, the player having, say, the #4 card could play any of his remaining unactivated units during the fourth round of the turn.  Each side would play its 4th unit with the one side always going first in this version of IGOUGO.  After the end of all units activation attempt,  the cards are shuffled and so a different sequence is produced for each side.  As the sequence is not known, so a nice unpredictability of action is the result.

Photos of the action. 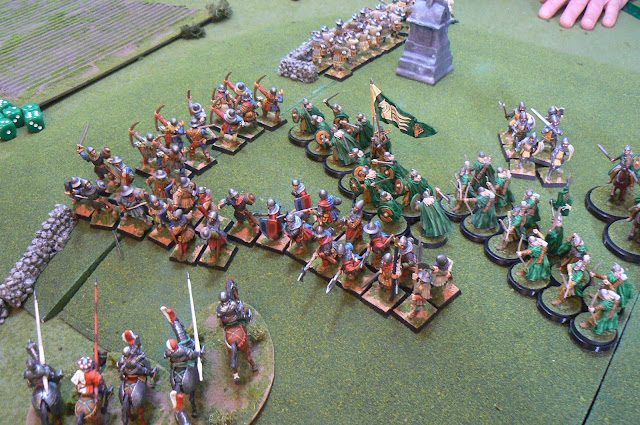 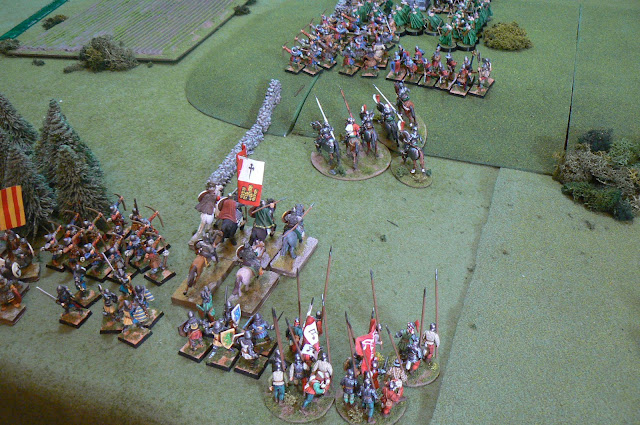 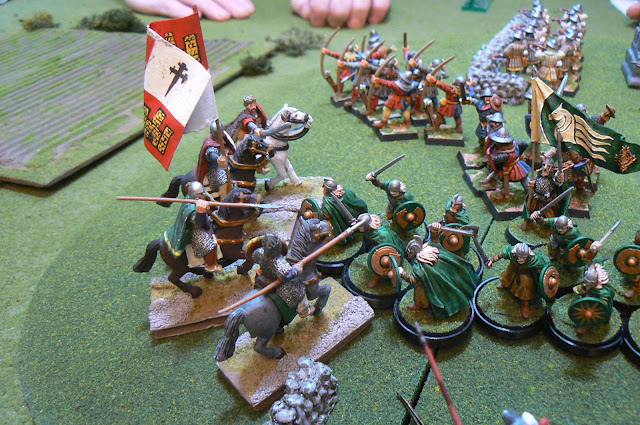 Posted by DougH at 07:12 No comments:
Labels: hosted games, medievals

This is a fictional and solo affair using my newly reconstituted “Saratoga Campaign” Brunswick Germans (and units of historically attached Hesse-Hanau) against American opposition.
In this case my entire German force will be assaulting the Americans behind formidable log emplacements.  I place the units almost by random, looking for natural start positions for each side THEN decide what might happen.  In most of my readings of historical battles, I don’t think the actual Generals did things much differently….

Turn 1, Brunswicker
The very first activation rolls a double-six!. So with that bonus, the Brunswick dismounted dragoons earn better discipline for the battle (spoiler: it really does not help) Next the Light Infantry advance.  Then, of course, I roll the opposite of bonus, double ones, which consulting the chart has the Rhetz Regiment commit friendly fire upon the backs of the Lights causing disorder. The other Brunswick units advance without incident however the artillery is bogged down in the rear.
Turn 1, Americans
The American heavy gun opens up on the advancing Germans and while causing casualties, the Germans would continue their forward progression.
Turn 2, Brunswicker
Despite their increased discipline the dismounted dragoons were still occupied on patting themselves on the back to move this turn.  The Lights continued to advance even with their disorder and the rest of the Brunswick army continued their advance - - except for the artillery no well to the rear.  Must be a broken wheel perhaps.

Turn 2, Americans
The the Lights now in range, the American light artillery on their right end of the line fired at short range causing more casualties but again the Lights shrugged them off. The heavy gun in the middle was apparently reloading and the light gun on the far left was still out of range. But now the American militia opened fire as did the 2nd NY Regiment and this proved too much for the Lights who bolted.

Turn 3, Brunswicker
Again the Dismounted Dragoons rolled double-sixes for the activation (its either really good or really bad with these guys!) causing unknown fire upon the American right but this did not faze that militia unit (rolling 11 for morale!)
While the rest of the Brunswick force marched in steady line to the final fence to cross, the artillery again fails to move. It will be relegated to the rear for the upcoming battle as it cannot now be of any support to the assault.

Turn 3, Americans
Some of the American artillery again fires and while causing more casualties, the German morale survives.

Turn 4, Brunswicker
During this turn the majority of the army readied themselves forming up in close-order while the Hesse-Hanau unit moved to the left.

Turn 5, Brunswicker
All units (!) begin their advance through the open area cleared by the Americans in front of their log defences.

Turn 5, American
Militia fire forced the Dismounted Dragoons to retreat.  Now in range of the skirmish rated militia units (at only 12 inches) and the lone regular unit of the 2nd NY, the Riedesel and Rhetz Regiments were taking particular punishment and both are now under 50%. But morale continues to be good.

Turn 6, Brunswicker
While the Rhetz unit stopped to doff its disorder (at 50% it will now ALWAYS be disordered to some degree) the Riedesel Regiment rolled double sixes (my dice in solo games always seem to be hot or cold) thus earning itself two activations so with that went at the double at the American position. Unfortunately being at half strength it failed to make much impact (only 3 dice) .  Not all was bad for the Brunswickers as the Hesse-Hanau charged and got into the American position.

Turn 6, American
Not all was good for the cheering Hessians as the displaced militia responded with shooting and the light artillery pivoted in place.

Turn 7, Brunswicker
Seeing the units in his immediate area at half-strength or unwilling to move (both full strength units failed to activate) the Brunswick commander contemplated ordering a retreat while some of his army was still in tact but continued failures in activation and the lateness of the day had him/me give up on the assault.  While the main army was to retreat the Hessians took the American light gun without casualties.

Turn 7, Americans
The units around the Hessians all failed to activate and even the heavy artillery could not load a round against the retreating Germans.

Turn 8, (Darkness)
The lone fighting unit for the Germans - the heroic Hesse-Hanau finally wore out and also failed to rouse themselves to further action.  That would make seven, yes 7 failed activation rolls in a row!  I think the dice gods are telling me to go to bed.  Thus the Brunswick direct assault on Long’s Redoubt failed with heavy casualties.

I used the “Rebels and Patriots” rules which follow the “Rampanty” style of play including activation.  Great for solo play as the units absolutely will not follow orders and do their own thing which is great for the narrative, probably realistic in a way, and certainly does not allow favouritism for one side or the other <grin> 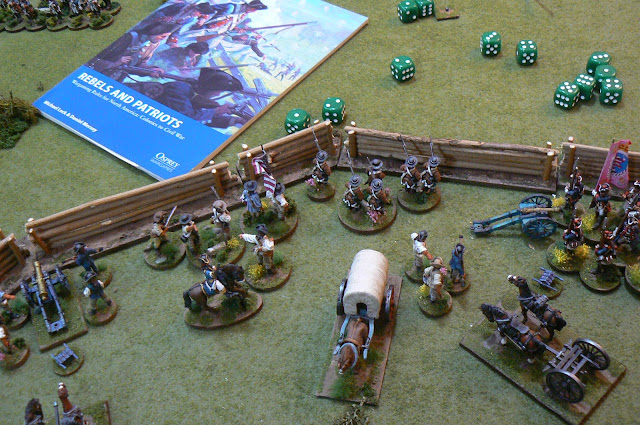 The week in gaming


Still haven’t got to my “Saratoga” game set up on the table for the last three weeks..... but did take my Samurai on the road for a Monday Game.

The Oyamata were to escort the musicians and gifts to a wedding while the rival Takeda wanted to halt the convoy. Used Lion Rampant rules with an add-on for the Teppo (handgunners).

Short story:  the Oyamata players rolled poorly and wore out fairly quickly.  Extremely poor courage tests by both sides had units vanish rather than be battered.  I guess one’s life (based as ever on the randomness of the fates) was not worth the honour of wedding gifts, even for the Samurai…..

-----
On Friday, it was the ClubNight and, after offering scenarios set up for Will’s Jacobite game (see his blog: link ), I got into Lisa’s Congo rules game of slavers vs tribes vs rival tribe three-way.  She made a call for additional figures and a couple of us offered what we had; and ended up playing in the game anyway.

The interesting rule introduction by Congo is the method of unit ordering and activation.
The player has a handful of cards each. The cards have an initiative number together with symbols for movement (footprints), shooting (bow and arrow) and/or panic (umm, something scary to Congolese warrior).  These come in various amounts and so the player can pick three of these to play in their next three plays.  You can sorta guess what you might need to do in the next 3 turns but things could certainly change which makes the selecting difficult and hit-and-miss.

Points were allotted to victory conditions.  As a Masfusi I wish to rescue our prince, and the other captives, kill slavers and prevent the hated Kosi from doing the same.  It did not start well for me as, of course, I picked up the dreaded chit as I entered the rough terrain and so panicked so firing at the nearest group (friend or foe).  It was to be my fellow Masfusi  for me to blast away using my only trading-muskets causing death and wounds.  This then panicked that group who fired back with accurate spear fire, killing three of five musketmen!   Meanwhile another group of mine were shooting at the slavers.  There was only a small chance to killing one’s own but my fire firing did just that!  While usual for me, not a great start….
I managed to gain the most victory points at the end so redeemed my early ineptitude however. I still think I eliminated more of my own than the enemy!

Quote of the game:  the Kosi player having fun with a small group of poison dart armed Pigmies (pun included??) also envisioned his tribe to be cannibals.   A rule of ‘Congo’ could have you add a stress token to your unit for a chance of saving figure from being killed. “Nah, we’ll eat him later”  We had a light and fun attitude to the game….
Posted by DougH at 15:28 7 comments:
Labels: "Lion Rampant", Bonsor games, hosted games, rules, Samurai
Newer Posts Older Posts Home
Subscribe to: Posts (Atom)