For one of the organizers of the gaming, DaveMc., I have made some 'ground' terrain for him in the past - to make the game a little more attractive you see - and while I think the games fun but always lacking a bit of variety.

So when I saw the the remnants of the nephew's birthday candy pinnate left on the ground, I offered to help clean up, pocketing a couple of the plastic egg shaped containers that once had held candy but now were garbage..... but to a wargamer such as I and what I saw as a clever modelling scheme.....


I cutout prices of card to match the curve of the egg as the fins, glued pieces of thin cord around the model to hide the seam and to give the model some "texture".  The fins were then given cords of 'green stuff' modelling epoxy; after which, the whole was painted a metallic color.

The two plastic eggs were attached to telescoping antennas from an old defective Ikea lamp to give the ability for the balloons to be a different altitudes.

These will certainly not win any modelling awards of course but it would be fun
to see DaveMc get them into the action someday.

Edit:
here is a picture of them in action 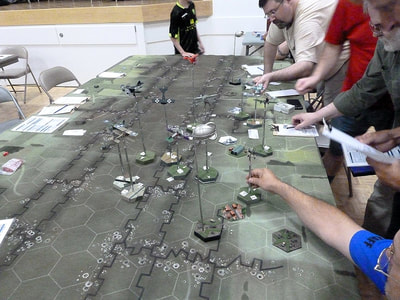 As a aside the illustrator/writer of Canvas Eagles, Eric Hotz, (of HotzMats) is a member and often participates.  Don't know if balloon attacks are in the rules but many of the players have used the rules for years and I am sure they will come up with some method.
Posted by DougH at 23:14 4 comments:
Labels: airgames, green stuff, modelling

While I blog only to keep a record of my wargaming activities, I am aware that, to my utter astonishment to be honest, that people follow said activities.  OK, I do try to make the entries somewhat interesting and write in a style, I hope, which are entertaining to read - if only for myself.
The long span in between has been a result of a computer problem, now fixed, and a dearth of anything to write about.  Personally I find this distressing as my hobby is an important part of my activities regardless of its priorities in life.  Or in other words, I rather paint than mow the lawn.  However, being also a rational man (I think so?) I must do the latter before the former.  That being the case, work and life has prevented me from much in the way of hobby activity.  Thus the dearth of posts.
However, last night, I participated in a "Dragon Rampant" game.  Regular readers will no doubt be aware of my current love of the Dan Mersey series of "Rampant" rules having resurrected many of my dormant collections to feasible "armies" of the tabletop.  While I know the basics of the game, the fantasy troop types are beyond my comprehension and so I had a tough time trying to decide "is it better to attack that unit or this one?" or "how tough are those things?"
But the system is fun, if not frustrating if you can't activate, or in my case often, throw my 12 die to get only one hit etc.(the majority of rolls being of the 1 or 2 category!)  But quick and entertaining.  Which is the point.

As I did not bring a camera ( I am that out of practice!) I had the GM forward a couple of shots
ChrisO's figures.  Very well painted I might add. 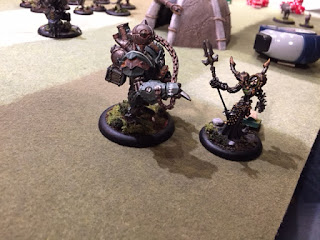 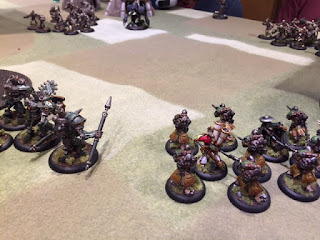