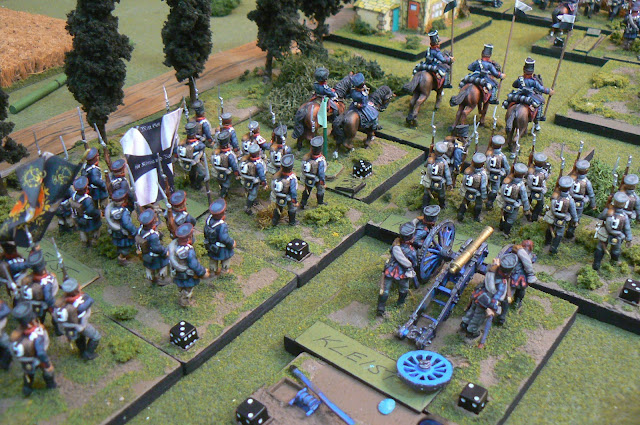 The Prussians, confident the French army was but a fly to be swatted away on the march to Paris, sends Ziethen as the lead element of Kleist’s Corps with Hacke’s Cuirassiers and Kapzevich’s Russians in support chasing Marmont’s weak corps.  But just west of the village of Vauchamps, Marmont suddenly turns and moves against his pursuers.  The Prussians are puzzled by this until they see the French Imperial Guard horse and behind them the bearskin headdress of the Old Guard.  Oh dear, Napoleon must be here.

Not only are they unwilling to face the renewed French force, they are soon attacked in the flank by Grouchy’s (Grew-she) large contingent of cuirassiers and French horse which cause panic throughout the Allies formations.  They are thrown back with large numbers in casualties and captured.

Sounds like fun to see if we can create this scenario.

The key is to have Grouchy’s flank attack remain unknown to the Allies. While some precautions for this will be necessary if in group play, as it was a solo game, I simply would forget to remember this as the Prussian player!

The photos show some of the action of the game, but the outcome was very much like the real event with the Allies commands crumpling; although it must be said that Ziethen showed fine form in resisting the French much longer than anticipated by some adroit tactics minimizing the Guard Horse to a large degree.  However, the Old Guard momentum and the mass of French horse let loose to roam on the right flank of the Prussian column - for Kleist was unable to get much going (a combination of lack of command initiative and congestion) meant disaster for the Allies. Their collapse of Corps Morale led to the conclusion of the affair.

Digging through the boxes of lead can lead to interesting projects.  I found a few Old Glory 1809 British artillerymen which is a bit early for my interests but more importantly for which I have no guns.  However I was just researching the uniforms of the Swedes during the Napoleonic wars (that is a very obscure topic and apparently even the Swedes themselves have little knowledge in the topic as there is dearth of information to be found in their archives if the old researchers are to be believed).  However in my hobby-within-a-hobby old papers consulted, at least one of the Swedish artillery unit's wore peak-less shakos in my 1813 time-frame and which to my wargamer’s squint, the version provided in the Perry’s British Hussar box would suffice.  I simply loped off the British heads and replaced with these plastic versions.  For the gun, I found an old miscellaneous howitzer to be painted a ‘bluish-green’ 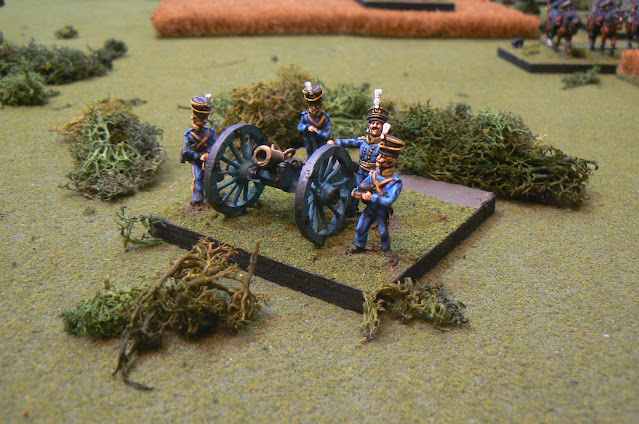 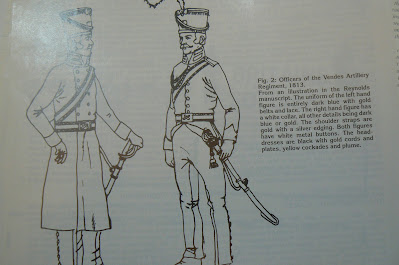 ed. note:   I missed the 'white collar' notation so must go back and repaint them.  Sounds a bit wrong having the collar a different colour than the cuffs but the Swedes certainly did have a different fashion sense in this era!

ed. note No.2:  the buttons need to be white metal apparently and the shoulder straps need a repaint and I painted the plumes the white rather than yellow - Wow, I really did not read that caption well enough! Luckily I got the correct headdress glued on I think.....