Got an email from WillB. suggesting he was surprisingly available on Saturday evening and wanted a game, preferably a Lion Rampant or of the ilk.  Sure, always up for a game.  A couple of the “Bonsor Regulars” would join us in a great game.  If you have any sense of humour, you can delight in the herky jerkey action created by the activation procedure of these rules. 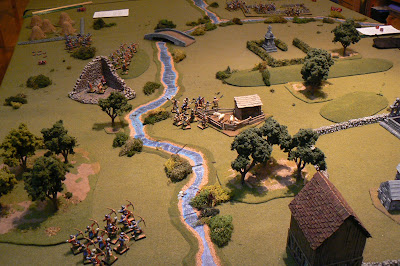 During the day I received good news about the long awaited miniatures order to complete the other side of the collection but I was still faced with having only the same ‘uniformed’ troops as all my early HYW are in dark red/dark blue.  Hmm, perhaps a family 'civil war' then?  Yes, perhaps between rivals for daddy’s empty holdings.  With this premise, I came up with the scenario that indeed, the old Earl of Raineth passed away that previous month and his favourite orphaned nephew and his eldest son are contending for the earldom and both forces wear the Earl’s colours as a sign of legitimacy…..that covers the same uniform explanation!

After laying out the table in my usual random way, I thought of a way to enliven the game by adding ‘personal objectives’ for each player unknown to all which could then determine the overall winner.  I created 7 cards for us four (thus even I could not know each player’s objective) and randomly distributed as were the troop selections.  I could create four ‘retinues’ of 14 points for each of us, with two per side.

I will not go into detail about the game as trying to describe a LR game is a very difficult thing. However I will mention that PeterM. has a notorious tendency to often fail his activations and in this game sat on his easily achieved objective for fully 4 turns, unable to activate to complete his task!  He finally gave up and tried …note the emphasis…to move toward the action. WillB opposite him did not do much better as, while he did get his pigs*, activations did not come often to him.

For activations, I was successful every time - a first for me! - but I think that got me in more trouble than not as Jim was clever enough to evade my charges. I was eventually eliminated.  But really, hiding knights in the forest?  Not very medieval, eh?  But his response to my good-natured taunts were to say “ And what, get them killed?”  He would eventually win the game by using them to burn down the barn, his personal objective.  Arsonist bloody knights of all things!  I may have prevented it by charging them with my archers a turn earlier but I thought they were just trying to hide again! Clever boy.


The battle ended with me eliminated, WillB my ally,  in a quick retreat, and JimF the winner having done his burning and his ally PeterM now able to move back to the graveyard and thus to his objective…eventually….

all miniatures painted by yours truly a few years ago.

*each personal objective, for example, searching the church for ancestral documents for use in legitimacy claims,  usually needed a unit to be adjacent the building for two consecutive successful ‘move’ activations to complete the task.  Other tasks such as taking the pigs or burning of the barn can be rationalized as taking advantage of the discord.


The game scenario was inspired by this historical battle.  I however allowed the players to deploy as wanted. I did not have the correct units - I have not encroached upon this theatre of operations as it is my friend KevinS area of interest - and didn’t want to remember which units represent which!

DennisC with a wish to be pumped up for his upcoming “War of 1812” tourist trip back east to all the historic sites, asked me to host a game. and KevinA, having the need of a horse and musket game and unable to host one himself, said he was certainly in for the game.

Having done many of the ‘usual’ battles of the conflict- this war actually has very few stand up fights suitable for a wargame - I chose North Point to give my rules a real test.  Why a ‘real’ test?  Well first I was very pleasantly surprised that I had the rules AND in pdf form as it has been we'll over a year - maybe over two (or even three??) that I have pulled the boys out of the boxes for a game. Second, that they would actually work with real players as they are, in fact, only designed to be used by me in solo affairs.

The historic battle was, indeed, a real lopsided affair with trained regulars of the British against poorly prepared Maryland militia.  The rout of the militia was probably inevitable and it was thus in the game also as the rules heavily side with training and discipline over player dice luck.  That poor Dennis commanding the Americans threw only for the least effective maneuvers only compounded the defeat.

The British under KevinA’s hand and with the heavy advantage of the British training of their line troops, were only hurt by the use of his rockets which Kevin had a tendency to roll for their course to boomerang back and disorder, and even create casualties, on his own troops!
Fun stuff indeed, but did little to stop the British advance.  The Americans quickly collapsed and it was clear in a short time of the game that the question of the British victory was not in doubt as indeed it was not in the historical affair.  As the log cabin was deemed to have sustained a “casualty” so thought to have caught fire from another of Kevin’s errant rockets, as it did in the real battle, the outcome was considered very accurate indeed…..

Dennis stated he thought the rules very good and accurate while KevinA advanced steadily in good British fashion for a major victor.  I hope both had a good time.

And it was good to give some of my large collection a bit of a stretch from their long incarceration within the storage boxes.
I wish I could just settle on but one military conflict and game much more of it but I really like to study many different eras of conflict and cannot simply chose but one.  So with many, many different collections, I simply must resign myself to hopefully bring them out but once and a while.