While watching one of those silly rom-coms, I asked my wife, "Do you believe in love at first sight?"
Not even taking her eyes off the screen, she replied: "Has the Perry's put out a new range?"

The annual date has arrived which leads me to the usual introspection.  Among the routines, I have a look at all my collections and see the years of painting.  The many, many hours of ....

Anyway, I used to paint eyes on certain figures whose sculpting is deserving of such detail.   These days, even with the very nice ones, washes or ignoring of such small items, is the normal with me.
However,  I rummaged into the boxes to look at my old French AWI collection of Front Rank miniatures and sought to give it a reorganization and complete it, having sat forlornly half-completed.  Most were painted many years ago and some only slightly more recently.  While close in style, I saw the difference and wanted some 'continuity' for this collection.  With this in mind, I needed to paint eyes once again to added to some of these units.

I must admit that I got the thrill of acknowledging that I have not quite lost the painting ability...and steady hand...needed.  Yeah, OK, not quite the standards of the best. Not even close.  But I am OK with the effort. Actually I am stoked that after a period of 23 years(!) I could still get that detail. A good birthday gift to myself.

The new ones are on the different bases (you can still see the white glue!).  I have yet to decide on a terrain scheme.  Probably the usual.....

Here I am starting yet another collection/project/army(ies).
In my defence,  I had this one purchased a long time ago.   But it was sadly left in dark boxes until, yet again, the rules "Lion Rampant" come to the rescue to save yet another of my collections from neglect.

Kingsford Miniatures is a local wargamer who produces a very nice range of 28mm Samurai of the popular 1550-1615 period.  I did not appreciate the nice sculpting and quality casting - lack of heavy mold lines or flash - until I started painting them..... I am trying to find my old form to give them credit.  Unfortunately I am up to 3.0 Readers now.

I guess my interest in the period is due to early watchings of 'Ran' and 'Shogun'.  Originally I thought to use DBA but no one around here games with these rules, so I bought enough for both sides.  At the time "Mr. Kingsford" had me paint up some cavalry so he could photo them for his website.  When returned they sat in the box and every few months I would think to do the rest of the army, but.....

With my enthusiasm for LR, I re-examined my collection, and discovered that I had enough to do two "retinues".  Excellent!!   Not only could I form two "armies" , but my original purchasing is pleasantly perfect for the LR organization.  For example,  I bought both the ashigaru 'at ease' and 'fighting, and some 'fighting' samurai.  I can throw in a couple of the extra samurai into the ashigaru unit to bulk up the numbers and to add yet more diversity and enough for one retinue. For the other, the 'at ease' boys were a bit static - not much wrong with that with such a position of course - but rather bland for a skirmishy game.  However, LR does have the "mixed-arm" classification which allows for both missile and combat types in the same unit, which allows me to add some archers to diversify the look to a large degree and, perhaps, is even better historically in terms of tactical deployment. Thus I have two rather different but even dispositions.   And just enough poses for all.  Very convenient.  Do you get as spiritual when things come together this well?

Will Murat ride again?  One of my tabletop figures is modelled after the famous Napoleonic commander which I created out of miscellaneous plastics and green stuff and which I am fairly proud.  However, as my wife loves to point out, he stays in a box much of the time.
Then why the effort?  Indeed.

Well, just as I finish typing these musings, she comes to me with the story of finding an old cook book, a treasure she once desired, by collecting cereal box tops!  She sighs as she states that she has never used any of the recipes and hasn't looked at it for years. It is stored along with the many others, mostly unused.  Enlightenment?  Nah. Probably totally unrelated.
---------------------------

My Murat at the height of his game.

The Story of it's creation at:link 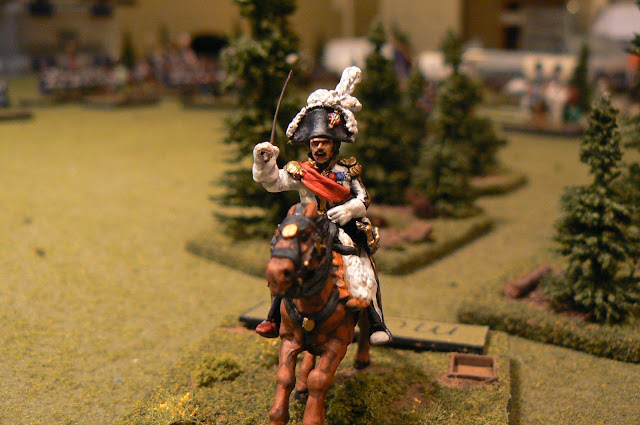 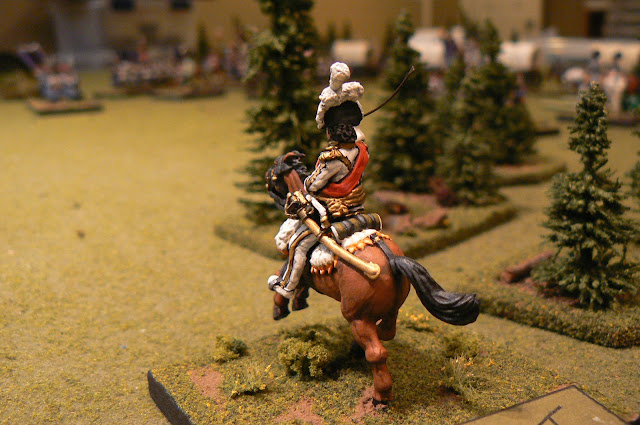