As the music ends...

During a solo playtest between Russian vs French cavalry forces somewhere deep in Russia,  I was playing 'mood music' with the soundtrack from the movie "Enemy At The Gates" (WW2 Russians defending Stalingrad).  During this music the French die rolls were, even for my standards, very low so losing combats, failing courage and/or rally tests.  However, immediately upon its ending, Russian rolls then became horrible, losing 2 vs 1 combats, failing to move, etc.

Posted by DougH at 17:03 2 comments:
Labels: musings, the silly side

With Dunkirk behind us.

Everyone loves a nice wargame table and so I was attracted to CraigM's wonderful looking buildings and effective fields and roads during last month's club GameNight.  Also I wanted to see how 'Chain of Command' worked so I offered to join should he have a spot.  Apparently my German opponent and myself as the gallant French defenders of a bridge somewhere in northern France a few miles away from Dunkirque were novices to the rules so were ably instructed by Gord and Craig respectively on the many subtleties of the Two Fat Lardies rules.

The scenario was for the French to hold off the German advance while Belgian engineers wire up the bridge.  In addition to my small force I had an 'unreliable ally' AT and squad made up of French but from another unit.  Only if I rolled poorly would they find somewhere else to go.  And yes they did....

The engineers would take x number of dice to set the wires.  I rolled 3 consecutive ones during the first three turns of the game.  Sigh.  I guess the wiring was bad.

Trying to figure out which dice did what activity (only those who have played these rules will know what I am talking about) justified my French command ability
.  I had a good shot at a PzII with an AT but, again, the dice failed me and little occurred during that "perfect opportunity"

Eventually the Germans succeeded in shooting me out of strong building position while my poor infantry caught out in the open died under the hail of bullets.  My force morale wore steadily down and my force buggered out, leaving the Belgian engineers several wires yet to attach. One further step back to Dunkirk.
Posted by DougH at 19:11 5 comments:
Labels: WW2

within the bigger battle....


….while the main infantry battle raged on the left flank, Napoleon sent a brigade of his cuirassiers together with some dragoons and hussars to capture the Russian redoubt of artillery playing havoc with his reserves…. 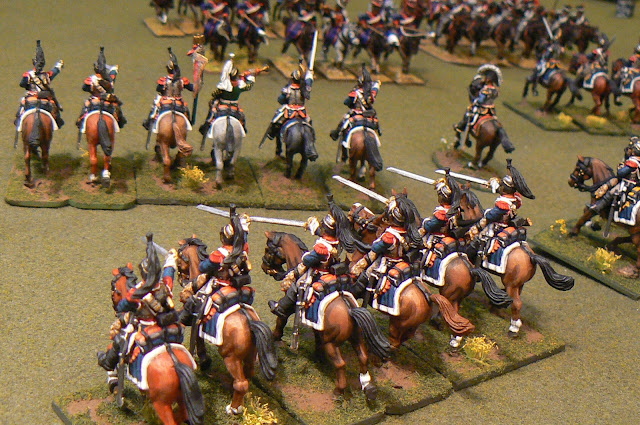 So within the context of the main story, our playtest game of cavalry only Napoleonics using our version of Lion Rampant had French dragoons and hussars to take the redoubt while my cuirassiers were tasked to keep the masses of Russian horse from interfering.

I had the Russian divide up their larger number (but equal in point value to the French) between WillB, JimF and PeterM but roll for their starting positions.  This was to simulate, to a degree the Russians sending in troops from various spots of their reserves and some of the positions were made difficult to manoeuvre as a rules test.
WillB’s beloved Cossacks were first to move the attack rounding the village only to stop with numerous failed activations which he explained as the Cossacks suggesting they were not about to make any such charges having the enemy “having guns, sharp swords, and such!”
Kevin with the dragoons and hussars surprised us by using carbine fire (!) to cause casualties upon the hapless asiatic horsemen.  The tactic worked well with him making most of the high activation rolls.  That could not be said of his dragoons who had a hard time getting around all the limbers and caissons (or so it would appear from his rather numerous failed attack activations!)  to attack the near defenceless Russian artillerymen who fought surprisingly well (we gave them a 6 on rolls to cause kills on the attackers)
Meanwhile, Jim with all the Russian lancers charged and counter-charged with the French cuirassiers but found the additional stamina (armor) of the French horsemen hard to gain hits upon.  Of course much ‘discussion’ resulted from this   >)   In the end the talk turned to tactics and with the difference in movement, thus charge and counter-charge dynamics, the heavies were thought to be more vulnerable than it would first suggest.
Peter with only two units in the centre but those being the strong Russian cuirassiers, chose mostly not to use the ‘group move’ activation as that “put all into one basket’ but had each unit move independently to have “at least one available…on average” (he is our “Mathematician”).  He sat just out of the French heavies movement range content for the counter-charge if needed.  At that point the rules had the shot extend out to allow the standing Russians to put a shot into the French (this range would subsequently be reduced as all felt the range was ‘out of scale’ and tactically unfeasible). Well, I guess I could be continually be shot upon or charge, so as a good French cavalry commander, I charged…to rather mixed results.

Nevertheless the boys had fun and gave good discussion on the rules.

I am still just an aim and shoot cameraman with only one setting on the camera and no inkling how or to what setting to use; so I take the opportunity to take photos during club night as the camera seems to love the lighting.

This month's 'target' is my newly painted French cuirassiers mounted singly.  Each unit is six figures with two units forming either two wings of a full regiment or two squadrons of the regiment or perhaps only sections of a single squadron, depending upon how the viewing wargamer considers the scale of the game.

Of course ALL wargame units are of a ratio much smaller than the historical formation and if 100 miniatures strong it could represent a squadron or the regiment at a 1:5 ratio.   But that many would be totally unplayable on the table; so we must scale everything back. As the perception to the level of play varies from player to player, I tend to just say units to describe formations of play in the game.

Merely because of availability, my formations tend to be two units of 6 for each.  I try in most cases to add a commander for if should the rules and need arise.  I have another cuirassier formation being 're-equipped' for action (I 'stole back' a group of cuirassiers I painted for a buddy as part of a trade and now under a touch up.  Now will have to replace them with lots of other stuff I guess, as I got hot and heavy about doing more of the French armoured horsemen!


The new project gaining some of my attention these days is developing “Lion Rampant” for Napoleonic cavalry action. Yes, the medieval rules!.  Cleverly titled “Hussar Rampant”, these are specifically and exclusively for the use of only cavalry during the Napoleonic Wars.  This exclusivity avoids any need for complications with the addition and interplay of artillery and infantry for what were often only mounted actions between the colourfully clad cavaliers of the era.

As ‘LIon Rampant’ is at its best when dealing with the back-and-forth swirling action of the mounted warrior, it is ideal for this interplay.  I mentioned this during a late Saturday night beer sipping conversation with a group of wargaming buddies and immediately we started with how to go about making this happen.

Obviously besides the gaining of, painting of, and use of miniatures; we need a set of rules.  I didn’t think converting LR would be a problem.  Already, many wargamers, including an article about using LR style for the use of small unit Napoleonics published in Wargames Illustrated magazine No.342, have taken this approach.  However we wanted only cavalry, make all troop types effective, have no ‘national characteristics’ so that, whichever unit the wargamer wants to command, it would be roughly equal, and easy to play in a convention setting, to be imperative.

Three of us, in separate cities and in two different countries, continue to hone the rules.  Part of this process is the play-test so I took the stat charts and did a quick solo game using WillB’s Russians and French.

Anyone who has played Lion Rampant knows that any change, for example, from 7+ or 8+, is a huge difference and must be carefully weighted and so many more tests will be required to fine tune the charts.

[random thought: is that Dan Mercey sighing?] [Nevertheless Dan, thanks for the inspiration]

But for the moment, I will just present a few photos to show the look of the game.


As a group we have settled upon the Battle of Waterloo as the basis of the collecting as to keep the historical integrity of the troops used.  I already have two simple scenarios based upon real events in the battle which we could use.

Currently there are seven of us which have pledged to have units ready.  Today I was busy building the Netherlanders 4th Light (Dutch) Dragoons to add to my ready to paint British 12th LD for the Allied side.  Lots of snipping, scraping and gluing of these Perry plastics but, well, I seem to really enjoy doing it!