Well the Monday Night boys are still working on Dave McN's WW2 scenario.  While I am not really into the era - but I still can recognize a PzMkIII from a MkIV etc. - and don't have a great hankering for the rules,  it has been interesting playing the same scenario now three times being both a Russian and German player.   In fact I ended up last night as the Russian commanding the militia types, entrenched on the north side of the main road facing the truck mounted German infantry with the StuG and PzMkII support which is exactly the mirror the position and composition of my German force of last week's game! This is remarkable as the typical wargamer selection process is done before each battle.  This can be described as " Hmm, you take that and that, and I will take this and I guess, this...."

I really did not comprehend this mirroring until after Dave McN had met with overwhelming casualties that Francis suggested that Dave did the same tactical errors I did the previous week.  Looking over the photos it becomes apparent this observation was indeed spot on.  Funny how sitting on the opposite side of the table makes the perspective that much more different.

OK with that, how did the battles proceed?

Well, to understand the battle/games we must divide the table into four parts. First east and west with the river dividing the two and obviously the Russians and Germans deployed respectively;  and north and south with the main road and bridge dissecting the battlefield down the middle with a ford to each direction north and south.

With four players in each game, the normal wargamer "I take this side and you take that side" deployment emphasized by the fords was made in both games and the Russian militia was set up in entrenchments to the north of the main road while the main Panzer thrust was made over the south ford.

In the first game I took the truck borne German infantry leaving the 251s to accompany Kev's panzers. In the second game the same was done with Francis' blitz movement with the same force while Dave attacked my emplaced militia with the same truck borne forces.  Like I said: identical deployments without knowing it.

So, tactically was it the same with the different players?
Well, in a word, yup.
In the northern section of the battle, the trucks were shot up forcing the Germans to bail and often disordered prompting losses and delays.  In both battles the bridge was blocked by the Russians and the Germans had to hump it, slowing them as they moved against the poor morale but entrenched militia.  Slow going which was not to the German advantage.

During the 'briefings' Dave McN claimed to have a cunning plan.  But with my placing two of my BT-7s right dab in the middle of the road at the bridge forming a blockade what I would assume will be burning wrecks... 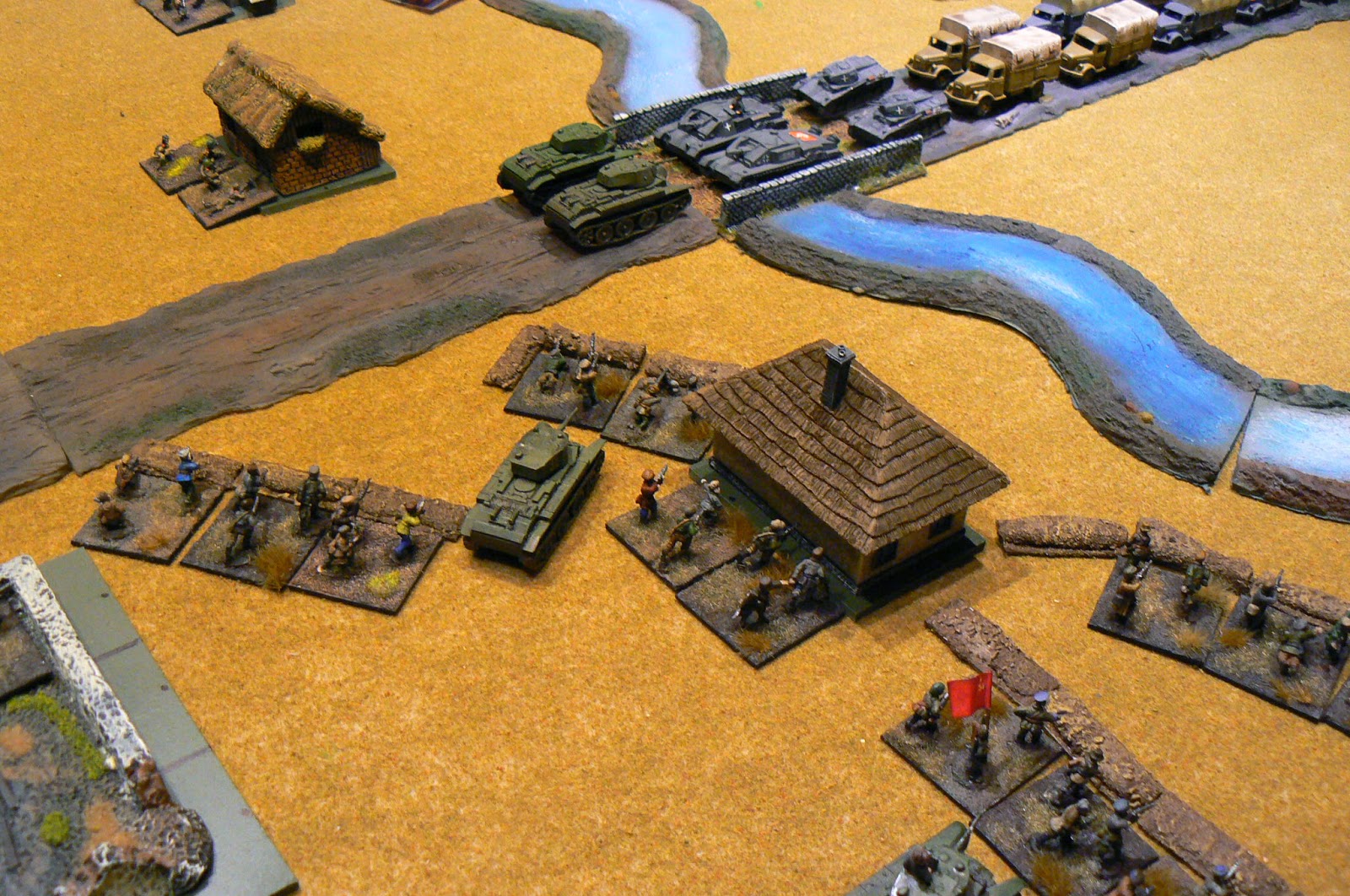 ....his plan exactly as mine as it turns out ( ! )  to get into the meat of the Russian defences before needing to dismount was foiled as was mine playing the German the week before. He went to the north ford, as I did, forced to dismount, as I was, and got shot up by the damned militamen, as I did to him!   History repeats itself once again!


Kev's set up of the Russians in Game 1 (above) compared to my set up (below) seen from the opposite view:

Dave forced to the north ford in Game 2:
I had fairly good dice luck this game --more 9s and 10s than usual -- and his close combat attacks universally failed.  If the game was to continue, I was ready to finally move troops to help my counterpart, Kev, who was having no luck against Francis' spearhead advance:

15mm figures and vehicles from the collections of Francis and DaveMcN.


A game quote from the latter battle:

Time to call in fire support.
-so I don't have any?
Correct.
-in other words I just have a Russian militiaman with an empty vodka bottle to his ear calling for mortar support?
Correct.
Posted by DougH at 01:26 6 comments:
Labels: fictional battles, Monday games, wargames, WW2

Knowing the game turn seems to be a universal question most asked at any game.  "What turn are we on?".  So recording of said event is important.  I have seen various methods employed:  coins collected from pockets,  pebbles aligned in groups,  crudely scratched upon the back of the rule book, and such.  Of course dials of varying forms are most likely and I have been employing one given to me by a club mate which is basically two weak fridge magnets with card glued upon, the upside with a printed Napoleonic tri-coleur flag photocopied on the face.  Did the trick of course.

But a couple of days ago I just HAD TO go to the local game store to see what new items ( and sale items! ) they had, and to use up a gift certificate. "Dear, you want to go shopping?" Once I mentioned the area, she knew, but decided to come along away.....

Now as I buzzed around the store like a very excited and confused hamster before she got too bored, I found the '4Ground' display and came across their turn dial.

It is simply two pieces of plywood joined together by strong mini magnets which keep the wood together but still able to turn as to expose each number.  A tab allows for positioning.

Well I liked the concept so I bought it and with my OCD kicking in, I of course had to do my thing to "blend it" into the table as not to have visual distractions. 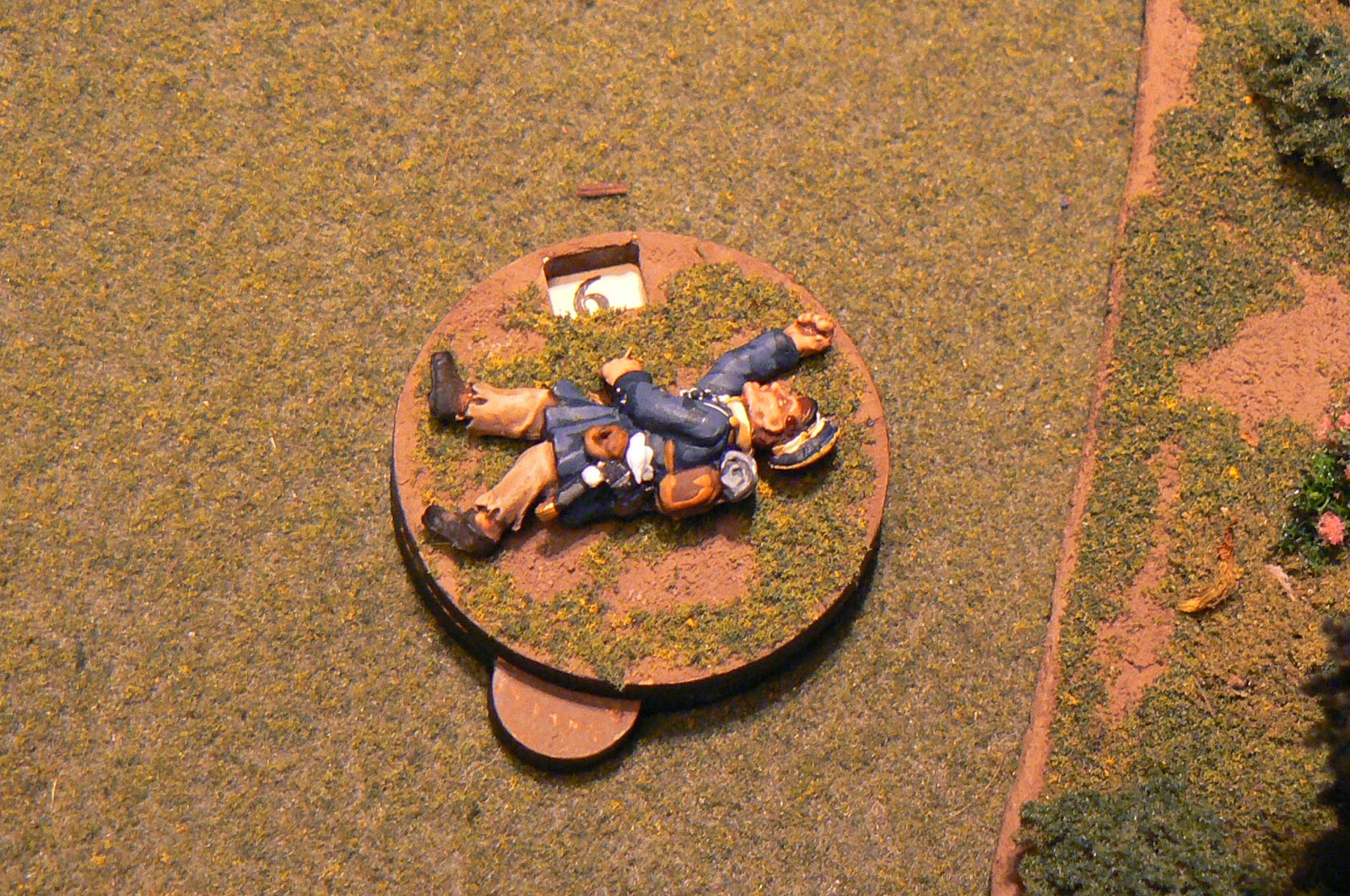 Without spending much time on this, I painted the edges black, the tab brown, added my "earth" putty and flocking, and deciding that I wanted a bit of extra weight as not to allow the number to be changed should an accidental nudge be made, I added an existing lead Prussian casualty.  Actually the dial seemed too plain and I thought of the extra 'dead' to place on top.  I have plastic dead types but this Prussian was already painted and in hindsight the weight effect is a good by-product !


Quote of the day:  I have CDO.  It's exactly like OCD but all the letters are in the g*d**n correct alphabetical order !!   <grin>
Posted by DougH at 09:48 9 comments:
Labels: markers, modeling, Napoleonics, rules

Examples of our Napoleonic Markers

I like the use of subtle markers on the table rather than any paper notations or obvious coloured objects to distract from "the look" of the tabletop.

These do not have to be elaborate affairs nor do they need much effort to create.  I have done much of the work of these while waiting for the wife to finish dressing before going out,  and such.  Ten minutes of quick gluing a bit here and there can add up to finishing these mini-projects.

In our last game, Seth and I found that our corps morale requirement required us to remember which corps needed to test the following turn.  Even with only two of us and a quiet environment, we had to resort to an ad-hoc marker to remind us.  Seth finally suggested perhaps a flag or something, joking that it could be a white flag... as I was about to conduct my first test..... har, har....

A good idea nonetheless , I looked at what materials I had at hand.  Lots of those GW plastic bases with thick black edges so keeping with our basing look.  I have plastic toothpicks so, picking out the green ones as not to need paint for quick practicality and for that subtlety, mind you.. I cut them into half as height is not really the issue and hot glued them onto the plastic bases.  I cut some paper into flag shaped bits and wrapped it around the toothpick while creating the wind-wave (this I did while during commercial breaks in between my rare viewing of TV - I have no sympathy for those who say they have no time...lots of time if not wasted...rant over ).   Finally terraining the base itself to blend it into the environment.

The photo shows the 'Corps Morale' marker in action along with some of the twenty I created to cover any size of game hopefully.

The other markers are for the other various conditions;  the square blocks for, well, formations in square;  the abandoned pack for disorder, the wagon wheel for limbered status of the artillery and the ball bearings indicating ammunition status, previously required.

Another Monday night game last week with DaveMcN trying out a scenario he plans to present at the big local convention in March.
His scenario has the well-trained German Wehrmacht verses some Russians.   Apparently lots of militia/poorly trained troops as it turned out. With attacking victory conditions.....
DaveMcN in his style, seems to 'wing it' and so this version was due to be a debacle for the Russians in the game, so will no doubt not be that for the convention (he paints all these 15mm Russians you see....). Thus I will produce any no spoilers here.


For once, the "Dice Ace" Francis, did rather poorly in the dice rolling department and I with the superior Wehrmacht types had the upper hand against his rather poor early war Russian tanks and equipment.  I rolled along - despite rolling four 1's in a roll ...on a d10 mind you! - eventually hunting down his brigade commander who had abandoned his armoured car and ran into some woods!

The usual rule arguments discussions were made, and normal confusion re-evaluation about the scenario debated.

Quote of the Night:
Russian player:  "I really don't have any gun to take out the panzers"
DaveMcN.: "Yet.... it is still being built in Leningrad"
Welcome to fighting Germans in 1941!