I am in full summer mode with my wargaming.  That is to say, I am enjoying the sunshine as much as I can by doing as much as possible outdoors.  Thus lots of figure preparation (scraping and knifing of mould lines, cutting off of sprues, gluing, primering, gluing to painting strips...that sort of thing) Not very interesting or exciting but necessary and only sightly less fun than suntanning while drinking beer ;-)

I don't do much painting at this time (to be done under bright lights in the bowels of the house in the most hideous of weather...).  Well, mostly.  Because our Spring this year was not very sunny or warm, painting season was extended and I did get a couple of units done including this small element of French Garde Grenadier a' Cheval (Imperial Guard Horse Grenadiers)  Perry metal. 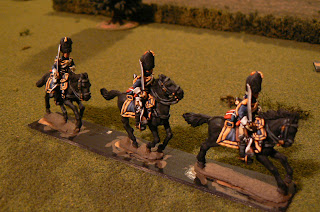 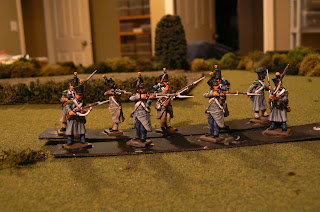 Neither units have been mounted on bases yet as they are not yet available.

The one unit which is interesting, is the newly done Prussian hussars.  I only need 3 (one element) of these boys and did have left overs from the Perry French Hussars boxset.  Having been inspired by other's conversions and a quick look at my uniform references, it really did not take much effort; especially as I only had to work on three of them.

The heads are simply extras from the Prussian infantry set as the Prussian horsemen also kept their shakos in covers; the valise ends with shaving of the 'Frenchie' trim;  the rear portion of the fur saddlecloth was shaved off the horses hindquarters to conform more closely to the Prussian version; and I added a GS bag to cover the small area which gaps between the valise and the new area of void of the wolfsteeth trim of the fur.  The left side you can see, is effectively covered by the sabretashe. 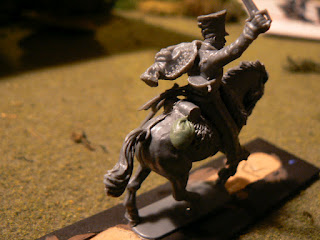 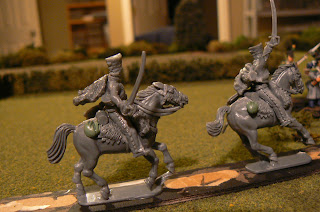 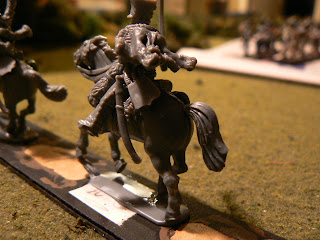 ...and yes, while on campaign they would probably have not worn the pelisse (the flowing cloak) I added it as they were much too nicely sculpted to left on the sprue and a hussar is hardly a hussar without one! (especially in the rather plain Prussian army)
Posted by DougH at 23:03 No comments:
Labels: green stuff, modelling, Napoleonics, Plastics
Newer Posts Older Posts Home
Subscribe to: Posts (Atom)