Miniatures wargaming is a strange hobby. You spend countless solitary hours shut away in some dark, probably disordered and no doubt isolated part of your home toiling away on painting, terrain or simply research and contemplation; only to reemerge to join many other such individuals to play together at large gatherings and share what is really your own individual endeavour.
It is also, for the most part, a foul-weather hobby. For those fortunate to be in climates which have nice, or even hot weather year round, most activities are done whenever the feeling allows. But for us in more differing patterns of cold, rain and snow, the hobby takes a somewhat more seasonal aspect.
When the weather is nice and sunny, thoughts turn to outside tasks and pleasures, gardening, sports and the like. When in winter, cold and rain, the comfortable surroundings of the painting table seem a wonderful idea. Thus for me, my wargaming routine changes much with the weather. I try to avoid spraying primer in the house and so I spend much of the summer preparing (using a knife to clean up metal figures, or gluing plastic ones) and primering them, attaching to painting strips and storing away for the long winter months. I am as a squirrel with nuts. I like to have many miniatures in supply so that whichever interest I have, I will have units ready to paint. Of course, in the meantime I will have added even more to the 'ready collection' so that I still have armies which I have available in boxes ready to hit the painting table from 18 years ago (!) ...but such is my mania.
So, lately I have been busy prepping figures for the winter and with work interrupting my life (sigh) I have not really had anything interesting to blog sorry to say.
Posted by DougH at 17:08 2 comments:
Labels: musings

Andrew came over for a daytime English Civil War game using my 15mm collection which has, very unfortunately, has not seen daylight for a long time.

The game, using a concocted home-brew set of rules went OK despite them having too much taxing addition and subtraction.  I think we may be getting too old to go through all that!  After the game, I revised the combat factors to more manageable modifying calculations without really changing the overall feel I hope.
Anyway, here are a few photos of the game in progress.


Posted by DougH at 09:47 No comments:
Labels: ECW, Monday games

Now this is the interesting thing about plastics - they are truly three dimensional.
I purchased the box of the Perry French hussars; three of which I painted as the 10th sans the pelisse.  Then I glued on the pelisse (I love this optional aspect of plastics) to create the Garde du Honor. The Perry pelisse is designed to billow out with the 'movement' of the obvious charging horse and rider and is truly quite dramatic. Wonderful stuff.
However, I was forced to consult my reference books to find out what color was the internal lining of the pelisse.  I had never before needed to paint this area as all the previous metal versions were tightly molded to the rider. I don't believe there has been any metal figures with the flowing pelisse either attached or to be glued as this metal option would be impractical.  With plastics it is not.

For the record, I discovered the lining was white but I thought that a bit too stark for the figure and went with a more mellow light grey. Nevertheless, it was interesting to discover this new aspect of plastics.

I have some Napoleonic French Generals already painted (I just like their uniforms!) and started to mix and match for use on bases when I noticed the huge contrast in height.  Hmmm, they seem the same size.  But when side by side the difference is notable. What is interesting is both miniatures are sculpted by the same person!

The case in point.

Now compare to the following


Both look OK and here they are together 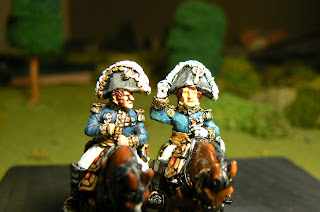 Again, very similar [as they should be as both were done by the Perrys albeit the former in their days with Foundry]

and from the rear.  The horse to the right has a slightly large rump, but fairly close. 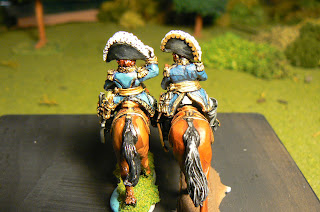 However together, and the camera picture taken at table level, reveals the older Foundry to be much shorter in the legs of both horse and rider.  While the torso is similar, the short legs make the whole figure seem stumpy in comparison.  It is interesting that one does not realize that when the figure is viewed alone. 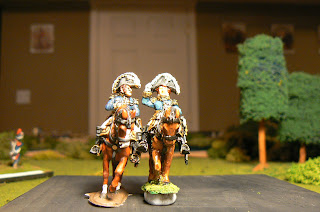 It is in the legs that the "scale creep" is most obvious.
Just my observation.


Note: apparently the owners of Foundry at the time liked the stumpy look and had all the designers cater to this view.  Obviously now away from that environment, the Perrys have moved to a much more proportional style which is why they are considered among the best in the industry.  Their plastics, with that mediums ability to allow for very slight structures, have the most realistic sculpts.

I consider the Perry brothers to be one and the same.  I had the priviledge way back in 1989 to visit them at their studio and even they could not recall which had done a particular sculpt!


Posted by DougH at 10:20 No comments:
Labels: minis, musings

French units for Battle of Hanau starting to form

Thrilled by my discussions with Seth for our upcoming game (well, in less than 12 months!) of the Battle of Hanau, I have now purchased all the French forces required.  The last were the artillery and Guard horse which I ordered from Perry Miniatures. Of note, they were at my doorstep within 6 days of the internet order!!  Good, fast service.... and the postmen must have been in a good mood...

The units are small (especially in my (the depleted) French army) with infantry stands usually of only 10 figures and the cavalry with the agreed size of three to an element.  I had a small trepidation that that few cavalry figures would not look all that effective but I think with the other elements having also few on the stand, it looks to be in proportion.  Certainly not the masses one sees in, for example, the Black Powder rule's photos, but as I can sit down and complete the unit in a couple of hours......

Here a couple of quick photos of those units I have now completed: 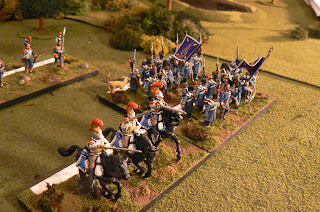