A long time ago I built “The Monitor” the famous American Civil War ironclad warship. Now I am not a particularly fastidious model maker and I like the task of creating a “reasonable” likeness out of cheap materials at hand.  No $28 anchor chains for me.  I choose materials like foam core, bits of cardboard and whatever is lying about.  For example this Monitor is of a foamcore hull and a plastic hairspray lid if I am not mistaken.

I happened to open up the box containing said model which had a self-written note stating “DO NOT make another model as you have lots in 1:1200 scale already!”  Oh man, I have to write that to myself?!  But I did a Minion “pfft” sound and shrug and, seemingly without conscious thought, went about making the companion “Merrimac”

[editorial note:  While purists, Confederate sympathizers, or legalists might take offensive and state the ship was christened “CSS Virginia”,  I am going with the ‘usual’ Merrimac name] 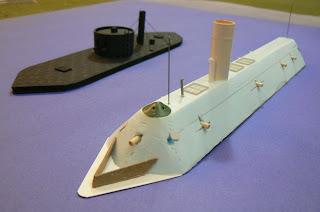 The Merrimac is a difficult ship to make as it has long sloped sides connected by rounded and sloped ends.  To work with card or plastic would be thus tricky to get the shapes correct.  I thus decided on an available block of dense blue styrofoam.  Still very tricky to shape with a long straight but angled cuts with corresponding ends rounded.  With help of a jury-rigged matt cutting device (and a couple of failed tries!) I managed to get the side cuts done.  The angle of the slope is not quite correct which should be at 35 degrees but it was the best I could do and is sloped.  The ends proved easier than anticipated as trimming with a knife brought down the sloped curves close to the mark and the styrofoam was surprisingly easy to sand (never having done such before)


I am doing the waterline version which does not show the oft illustrated version of the full hull - even the beautiful Thoroughbred Models 1:600 version shows the full length which was submerged.  Probably done for any ramming or collision events in a game.  I must look into that.  However, the basic shape was done.  The gunports were simply carved into the insulating material and bamboo skewers were embedded and cut off at the same length.  After starting to cover the pivot gun ports at either end corners (as these were not so skillfully completed!) I read that the historic ship went to battle without this protection.  I left the ones done but did not now need to do the others.

[editoral note: Found on Wikipedia "these six bow and stern gun ports had exterior iron shutters installed to protect their cannon. There were four gun ports on each broadside; their protective iron shutters remained uninstalled during both days of the Battle of Hampton Roads."]
So I got lucky then in my haphazard research and construction!


The deck details on the top are old railroad window forms.  The smaller intake chimneys on the top deck are cut out corners of round plastic sprues and the large stack itself an old cardboard tampon applicator - hey, it was the perfect dimensions for the 8 foot diameter chimney….

The odd shaped pilot house pyramid is a bit of green stuff; and the false bow - to keep the water from piling up against the front casement - are pieces of card painted as the wood timber construction.  The small rowboats to each side are 3D prints made to my specification generously by ChrisP, a wargame buddy, with my davits plastic packaging material cut into shape and inserted into the hull.

Played a few games using the two ships as I am developing rules for the ironclad fight based on “What a Tanker” .  Fun, two-player game, but with the same circling maneuvering, firing with little effect, as the historical engagement!

Having played this naval game with DennisC at the club the previous night,  I noticed some damage to my Monitor’s turret, no doubt caused by moving around the gun directional marker required for this glued down cardboard part.  The top grating was represented merely by rather poorly painted lines (I did not say I was a good model builder!), so I was willing to remove to repaint and replace.
As I built the vessel a long time ago, I discovered I had simply glued two metal gun barrels on the bottom.  If I paint the interior black I could use an open grate as did the historical ship.  It would look good.  As I was looking for appropriate ‘grating’ I discovered some other bits I had collected for making of other ships including various caps for monitor style turrets.  Among these were liquor bottle stoppers. As in the back of my mind the Monitor’s turret, especially now, seemed a bit off.  Too large.   So curiously, I checked the dimensions:

The height is perfect also!  With the attached cork trimmed this would allow me to give the model a moving turret.  No more required marker. 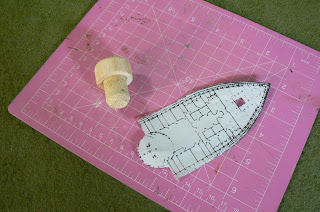 Well then, a change was in order and Monitor Mk II was begun.  After a failed first attempt at drilling gunports into the solid wood (luckily I had several of these stoppers….)  I was happy with the holes created (drilling was ideal as the ports had rounded ends).  The muzzle ends of 25mm scaled barrels were cut short and glued in and the turret painted black.

The hull is cut from black foamcore from a template scaled to a top-down view of the ship.  The smoke stack of the older model was not replaced as historically this was not installed and in any event, I had this in a wrong design anyway!.  The overall shape and details are more historical accurate but Iron plates were again indicated by lead pencil lines and rivets by dots. Lots of dots, but done while watching sports so not so tedious to do and surprisingly effective. 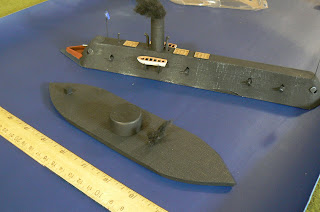 Anyway, not an award winner by any means, but looks ok to be pushed around on the table top.