WaT battle of a nameless town


Another all-tank battle in the frozen depths of the Russian winter of 1941….

We had four players with the Russian players, DaveMcN of course taking, what he believes to be the best of the Soviet tanks available, in the T-34;  and his comrade Francis taking two of the T-26 (points equalling any other tank).  The “CocaCola” Dave and myself taking a Pzkw III and Pz38t respectively. 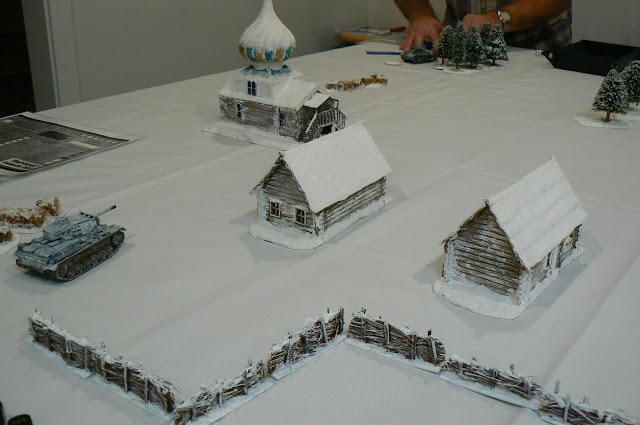 A humous point of the game having (the usually Russian-playing) me wanting to fire upon the Pzkw III as ‘C-C’ Dave had driven his tank around the far side of the houses to face Soviet Dave who (through my misinterpretation of the rules) was able to drive his T-34 across the table and now also facing the ‘wrong’ direction.  Even with a flank shot that I could not get many shots in. The bad, bad and few dice!  Francis scurrying along walls like a rat skillfully moving his tanks along the buildings  now saw he could position his little beasts to shoot the Pzkw III up the a*s (always a beneficial tactic in tank warfare) and also shoot my Pz38t in the flank (a still useful tactic) thus pounding both of German vehicles to submission.
The game was unique in that all the combatants were to be within an 18” radius of each other by the end of the game.  Rather more entertaining than the “find a hiding spot a shoot at long range” approach….

What a Tanker! BIG battle


I wanted another go at “What a Tanker!” so I put out an email to the usual club crowd of my hosting. I got a couple of replies which was usual.  What I didn't expect the number of players joining up…just before starting I looked around the room and there were the usual games going on - the fantasy crowd and the small games along the window wall, the big-table small ship naval game, the WW1 Canvas Eagles game at it usual table - but nothing else.  Lots of empty tables as all the historical wargamers were here at my rather white table, many with their own tanks, ready to start shooting!  I was a bit stunned to be honest.  Eventually we had 12 players!  I have never heard of a WaT game having such numbers. Luckily I could find or have a few of the veterans of the game find dashboards for all.  But 12?!
I quickly had each German player pair up with a Russian player.  I instructed the German player to roll his command dice at the same time as the Russian with the effect that we had only a six player rotation overall.  If the same two players were able to shoot at the other, a simple roll-off would determine who would ‘activate’ first.  This only occurred a few times during the game and did not cause any problems.  This new system worked very well and I was quite pleased with myself for inventing it off-the-cuff as it certainly lowered the downtime of the players awaiting their turn.

Amusingly it was only halfway through the game when I was asked loudly by several players to repeat the scenario victory points. I guess all that before-the-start-discussion was mute once the shells start flying (grin) .  The Russians I declared must be within 4 inches of the distant church while the Germans must have at least a tank in the burnt out village to win.  I hoped this would encourage movement forward rather than the “sit and shoot” tactic.  The Russians were more aggressive and a Lend-Lease Matilda, driven by a rookie player encouraged by the tank’s high armour rating (for this time of the war in 1941!),  finally got in a position to make a late game run to the church but the continual pounding by the Germans had reduced his command dice significantly.  He got close but no drive dice doomed his fate.  Aimed flank shots had his crew bail out.  The Russian last hope was a t-34 but it was rammed (!) and enough dice loss also doomed this Russian advance.

My couple of vintage t-26s did not help much (I spawned the first one only to have the second reduced to the same fate…not surprising with seemingly tinfoil armour) With none near their victory spots the game ended in a draw.  But the players seemed to enjoy the game which is the real victory.