Dr. Dennis M.D. , a wargaming buddy of mine, called me up to say he wanted to come over and that I get a game together yesterday.  Well I had the Waterloo set up still on the table. The French were set up and the Allies were 'blocked' out with raw wood stands: 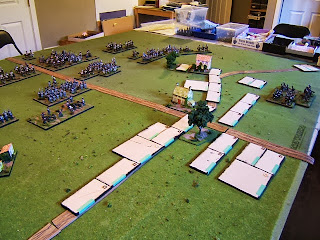 So took my war of 1812 units and placed them on the blocks to fill the empty stands.

However, as our conversation ranged from details about my wargame rooms, the game's basing scheme, his medical practice, and his upcoming trip alone by train across the country and such, we did not actually get to the game!

So like Geri in the delightful Pixar animated short film (link) I have proceeded to playtest the rules solo commanding both sides the best I could.


I will not bore you with all the AAR details thus far.  Well, OK, one incident: the infamous Bijandt's brigade "breaking" did not occur as they withstood a brief bombardment from the French Grand Battery until the battery limbered to move for the infantry and help in support. The Belgians eventually were purposely withdrawn. (although again some British might ungraciously suggest 'running' to avoid the French onslaught.  History repeating itself?  Good to see on the table though! ) Although in all honesty they would have be "destroyed" if left on the wrong side of the slope as they were historically.

Oh and one more:  As suggested in the comments above, the British Foot Guards are hanging on to Hougomont.  One of Reille's brigades was destroyed while others are pounded down.  Again historical results thus far.

While the Allied army is awaiting to be worked on, I will be painting the entire Prussian Army first which I must say is already underway.
My Prussian 6th Hussars are finally painted....all three of them. These are the slightly converted Perry French hussars post link and are the first of my Prussian army. 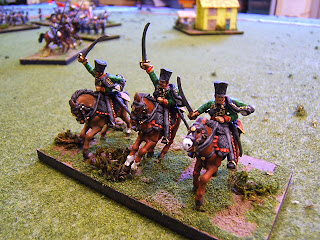 Well, sometimes you just have to repaint.....

While perhaps more historically 'accurate' in the tint of the color, the olive green  I used for trim of my Brunswick Light Infantry did not stand out against the black uniform. While I try not to let these silly little things get at me as I have a lot more other things to paint, once in the brain, I have to deal with it.  A wargamer OCD thing? Some other psychological malady? Don't know, but repaint I did. Didn't take all that long, but any time does cut into the stuff not already painted.... 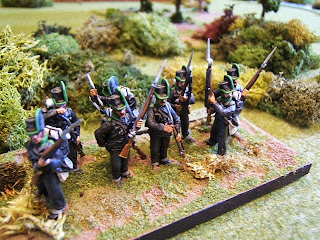 Mind you, now I happier with the unit, so I guess the effort was worth it.  Just silliness with toy soldiers, eh?

My French Deployment for Waterloo

Wargaming has all sorts of compromises, be it in scale, numbers, modelling, or participation.  I always wanted to do the big Napoleonic battles. Especially Waterloo.  I also like painting 28mm (or more to the point, the ability to see 28mm), but I do not want to paint large numbers of them. Yes 36 figure battalions look good but you can only have so many of them on any given table and hardly enough to be considered representative of a big battle.  But to get the game done and to conclusion in a few hours? Not likely sorry to say.  Therefore, you have to scale down and use the right rules for the situation.  I now believe the rules we use, and having one big element represent a brigade, do the trick.  With my wargaming buddy, Seth, I have joined him in going the big base route.

With the French completed, for fun I laid out the historical deployment.  Each infantry element is about 2,400 or so, artillery ~40 guns (= 6 batteries).  Obviously massive restriction in the positioning of element artillery elements with so many batteries wrapped up into a single gun but these positions made more for advantageous tactical play than historical likeness. However the Corps deployments are accurate enough.  More eyeballing than measuring admittedly.

Normally I work Friday nights and so miss the local club gamenight, however I could make this month's and with the WWI airgame hosted, I grabbed my stuff and made the trip.

Predictably I was shot down once again...sigh....  OK, I don't play the game all that much. What, three times a year perhaps?  So, yes, not very skilled, but come on! Virtually every time??!  It has become the club joke for random members to come by and ask if I have been shot down yet. I was hoping to continue the "trend" and not only survive but actually shot another plane down like the last time I played.  But no.  Last turn was announced and only one 'red chit' was all it took. With 3 tail hits and a 'spin check' which I could not recover from and... splat. And this on the final turn. Sigh.

Nevertheless with the silliness of the fellow players like the silly bugger sitting beside me (you know who you are!) who gave his pilot the name: "Fabulous Fabio Frankfort" for example, or for the unfortunate French pilot who was shot down early in the game.  For him it was a very SPAD day indeed.

But the game was good with Dave and Rene doing a good job keeping things going with dozen or so players including some kids around the table piloting the models.  They awarded prizes. Obviously not for any kills or such, but I gained a plane kit for my "best painted plane" which was a nice surprise.

Finally finished the French artillery contingent for the Waterloo campaign.  For many wargamers it would constitute their artillery batteries for their Shako or Black Powder rules, but for the big-boy ratios I am working with, heck this is it.
Actually the six guns up front do look the part of one actual battery! 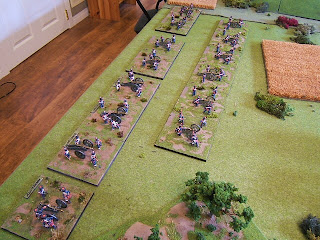 The line batteries are in the first row. In the second row,  line horse batteries on the left, the Young Guard (1814) - or those line units in overcoats - next to them, then the 12 pounder Guard foot batteries with finally the lone Guard horse battery in the second row on the right. 14 guns in total representing some 460 cannon in total. All are Perrys. 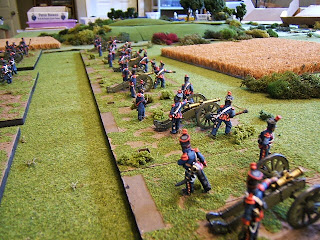 I must interject that we wargamers all deal with silly ratios. 1:20, 1:33, 1:100 or 1:2,500. It is really all in perception.  I want a high level, player is a corps commander thing.  It works. It looks good on the table. I still get to use 28mm figures.
Posted by DougH at 23:05 2 comments:
Labels: Hanau, musings, Napoleonics, Waterloo Project
Newer Posts Older Posts Home
Subscribe to: Posts (Atom)