For some unaccountable reason I have always been interested in the Saxon Army of the Napoleonic era.  Whether the enemy to ally to enemy of Napoleon or just the uniforms I don't know but I just had to do them.

OK, take a box of Victrix plastic French Guard Chasseurs.
They are all in greatcoats which, while covering all those nice, but kinda hard to paint effectively, white tunics, has the advantage of all having cross belts which all the Saxon infantry wore - just not only the flank/elite companies.

So with that we need to remove all the fringed epaulettes worn by the Chasseurs. While this, one might assume as I did, that it would be difficult, it proved surprisingly to be one of the least onerous of the chores.

The various French canteens were scraped down and cut to be the square tin ones of the Saxons.  Note: these are often portrayed as being worn on the backpack and I was thinking of making a mould of one to make out of green stuff, but the Chasseur’s versions were easily converted and I am of the option the back placement would be only on the parade ground [it looking more regular and as not to interfere with the view of the pretty uniforms and all] while in the field, soldiers would place them around the shoulders and at the hips to have them at hand.  Nevertheless, all the illustrations have them of a regular design so I modified each canteen on the plastic Chasseurs.

The Saxons fusiliers which will be for all my formations, did wear the cross belts having hangers [swords] which had a straight single handed hilt and not the “D” shaped ones of the Chasseurs.  This was the most difficult of the scrapings especially with some of the lack of undercuts of the sculpts and touch to reach areas.  The long scabbards were also trimmed.  While most of this could have been ignored and only noticed by the most obsessed ‘button-counter’ I decided that I would be one this time and get it right. Unfortunately it took the most time.

Headgear is usually the most obvious visual part of any uniform. The bearskins of the Chasseurs were stored away as the Saxons wore a version of a French style shako.  Unfortunately I had very few appropriate ones on hand.  However, to suit the greatcoat, I went with the Prussian covered version with the caveat that I had to remove the distinctive crown bulge of the covered cockade. This proved easy and gave a great “Saxon” oilskin covering with the ties in the back - looks different from the typical French look.  You will have to trust me on this.

A few uncovered shakos were added for the boys carrying the standards which would will be in the front rank of the formations .  These were 1809 Russian ‘un-Kiwer’ shakos with the badge removed but with the cords retained. I wanted the white cockade to say “we ain’t French"

With the shakos done, I also wanted some of the whiteness of the Saxons to be shown and their forage caps were white of a later Prussian design (which was copied from the Napoleonic Russian version incidentally) To my great “luck” I did indeed buy the Perry Russian Infantry which have plenty of these caps! I love plastics for this.  So I placed on a few to add a bit of colour to what will be a sea of grey and black.

With some flags, these formations will scream ‘Saxon’  for any of the 1813 battles…. I hope.

Now some might say why the heck not just buy the wonderful available miniatures of “Westphalia” or others.  Why the time and effort?  Well, I still want the light weight of plastics, the drab look of the greatcoats which is my image of the fighting during 1813-1815 (yeah not very Napoleonic of me is it?) but all this conversion was done on the weekend my sister-in-law was over to visit and with me nearby in the other room to be ready for lunches and some chatting, was ‘out of the way’ so they could have some “sister bonding time”
Good for everyone!
Posted by DougH at 16:07 4 comments:
Labels: modelling, Napoleonics, Plastics, Saxons(Nap), Uniforms

With the somewhat 'dramatic' change, not necessarily in the conduct of artillery fire within the rules but the number of firings/rolls allowed, the number of models required has bumped up slightly.  For the French I already had the models, for the Allies I required but two more, one for the Netherlanders and one more British horse artillery which we shall see shortly.  The Prussians needed four more, one of which I had already painted, one foot which I need to buy, and two horse artillery gun which, again, will be shown below.
The newly created artillery ratios are a result of integrating the number of rolls each gun model may conduct per turn with the actual historical number of guns within each formation for which the gun represents the artillery component. This is a great idea which a play test with David in our last game he suggested as an off the cuff remark but which I seized upon.  Simply, the MP (our little black dice) of each gun now represents 8 historical guns - a usual battery strength historically for many nations - per pip.  So a corps with 64 guns has 8 pips worth of fire and can roll the die up to 8 times to try to damage the enemy.  Obviously range and number of targets will influence the ultimate number but now we don't have the everything-in-range-can-be-fired-upon havoc we had in our convention games.  It was a little too much of a good thing.
So, back to the example, the corps has 8 pips of rolls but, our little black dice are but six-sided so 2 gun models are needed.  It is up to the player how to distribute the pips but the usual is probably have 4 MP/pips on each.  As "attrition" and enemy damage reduce this number, obviously the efficiency of the artillery will be reduced as it can fire/roll less times.

The one interesting aspect of this new approach is we do not have a need for close range fire rules as there is nothing to suggest a player cannot concentrate all his fire (roll all the dice) against only one target; that target either charging him or at near enough as to have all other target, if available not worthy of the effort.  Read: 'grand battery'

Previously with our Order of Battle we fudged much of the deployments as we struggled to keep the overall gun to foot to horse ratios intact. Now we can accurately establish the exact number of MPs needed and thus the number of gun models for each formation and indeed the type - foot or horse - which is the reason of my slight increase in artillery models.

Indeed, if a collector is so inclined, he could now represent that one battery attached to the lone cavalry brigade as a 1 MP gun model.  However, should he sustain but one hit, the model must be removed from the table as so that might be a somewhat 'expensive' endeavour.  However, even if chosen, the number of rolls does not change regardless of the number of models on the table and is based on historical allocation alone.  Very good that and eliminates the guess work for scenario design.

I have been fortunate that these new numbers are not many and so the costs have not been large especially as I have kinda cheated a bit.  With a trade with Mike B., and his generosity in giving me some loose figures he had lying about, I cobbled together some of the more unique models.

For the British I needed one more RHA.  Mike in our trading, provided 3 previously painted figures but no gun of course.  However I do have a love for the delightfully silly Congreve rockets and Winyates' RHA battery of Waterloo fame provided me the excuse to use him as an example for my new model. 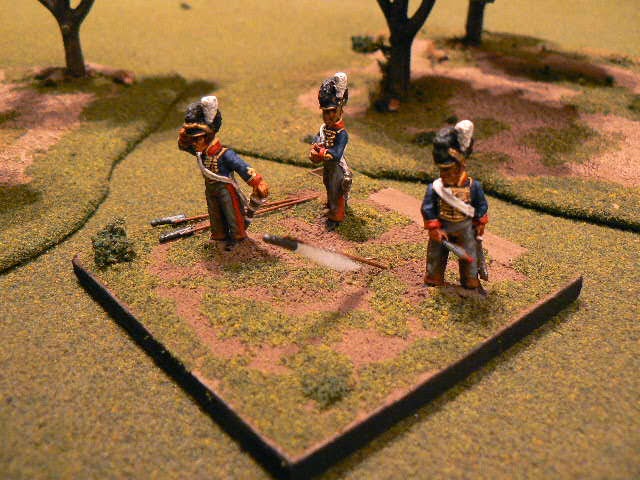 I firmly believe that the gigantic 'ladder' models of Old Glory and Foundry for example were for the very heavy 24 or 32 pound shells for use in siege warfare and not on the battlefield.  The reference books all have the well-know illustration showing, in scale, the various rocket sizes down to the 6 pounder shell no doubt fired by Winyates at Waterloo, firing them as he did, on the ground.  Thus I portrayed the same.  Yes, yes, probably should be a trough but I decided to forego it.

The rocket part of each was a cast from unknown origins to which I glued a piece of wire. It really was that small.   I repainted the Foundry RHA figures but did no modifications as their poses work and the mere three don't look out of place with the other more populous artillery stands and were free  <grin>

The Prussian army of 1815 was an amalgam of the numerous previous states which were under French control or influence many as late as several months before the start of the 100 Days Campaign.  The Duchy of Berg merged into the Prussian army with many of their old French style uniforms still worn (the white tunics of the infantry) and the blue and red of the artillery.  I had some French style artillery gun models about so I went about heavily modifying some other crew figures I got from Mike B. 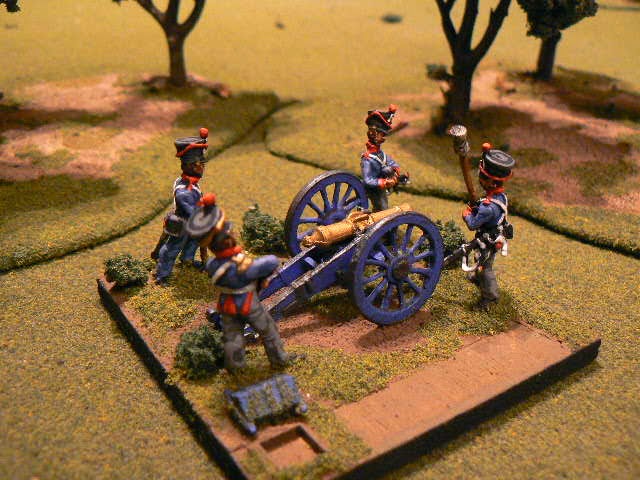 From the poses you might have deduced these were from Old Glory.  Actually British 1809 crew from which I chopped off their heads and replaced with British hussar heads [for the large cockade which is similar to those of the Prussian] reducing the plume and removing part of the shako flounders/cords.  The horse artillery, thinking themselves cavalry, I needed to add some Perry dismounted dragoon scabbards.  A change of tunic and pant colour - I left one in his old blue trousers and painted the new Prussian grey ones for the rest.  They look both Prussian-ish and their previous Frenchie-ness, which is the whole point. 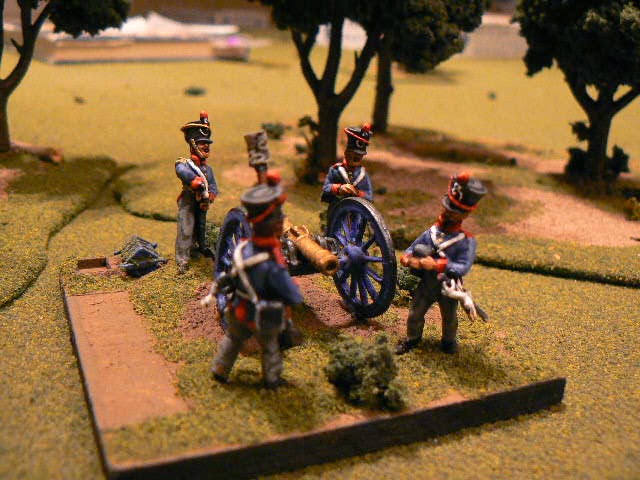 The second Prussian horse battery [Nr 18] is also unique as it is the ex-Russo-German Legion artillery which integrated into the Prussian army in February of 1815 but continued to wear it's Russian/Prussian uniform.
For this unit, I used Old Glory Russian horse artillery figures (surprising that, really...) but need to remove the heads as the RGL used Kivers and not the combed helmets of the Russians.  So I used Warlord heads for these.  The weird OG poses were bent to show the crew hauling up the gun manually.  It works well I think. 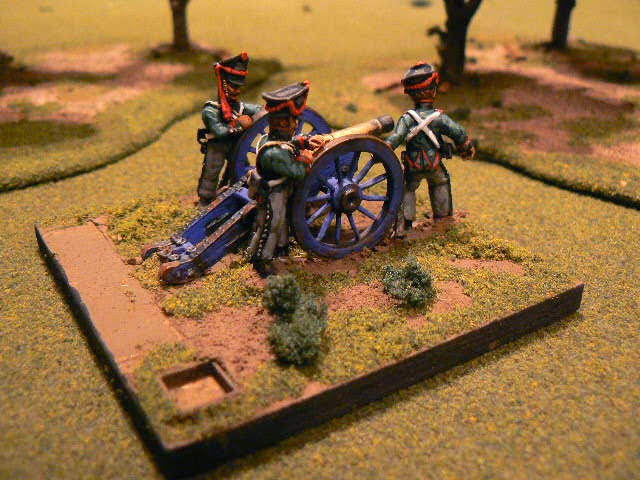 Again, the cheap bugger that I am*, the figures were inexpensive (read: free) and the gun, while somewhat inappropriate should some rivet counter come along, is of the Napoleonic era, painted in Prussian blue and so close enough!

*edit:  Oh I can afford wargaming. It is, cost to time engaged, an extremely inexpensive hobby but I am trying for low expenditures merely to control my obsessiveness! See, my dear, it is in print....