Painting being steadily done to complete Wellington's army for Waterloo.
The Hanoverians made up a large contingent both with their Field and Militia contingents but also with the old veterans from Hanover who had formed the King's German Legion. 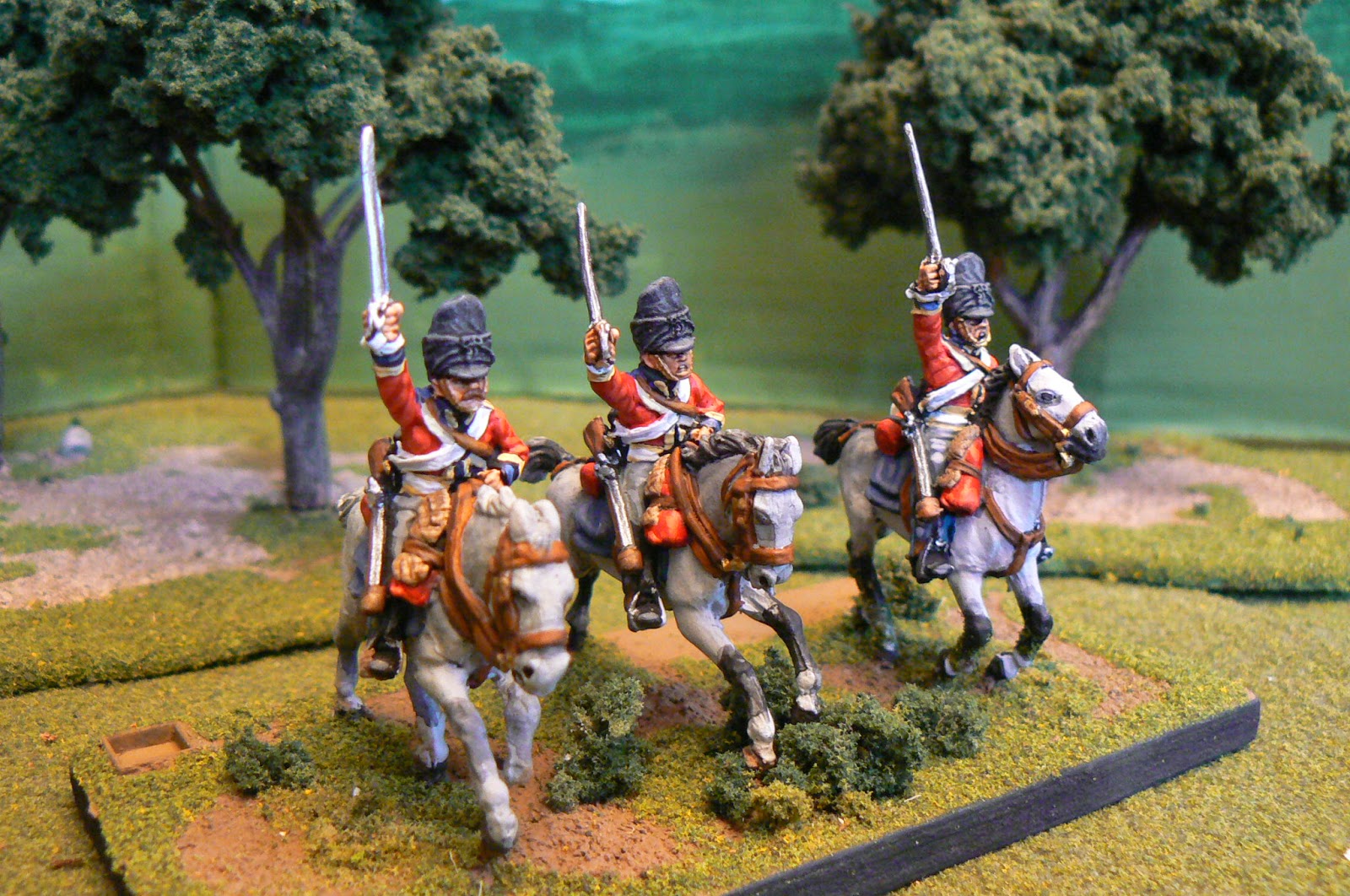 Tried to quickly do up the two "brigades" of Foot Guards at Waterloo choosing the 1st and 2nd Foot Guard Regiments - sorry, Third, you will be left out.  It's the number ratio you see....

The First FG is representing Maitland's Brigade memorable in helping stop the Imperial Guard attack.
The famous "Now Maitland. Now's your time!"  (about 6:20 min. into it)

from the movie "Waterloo"

and my version
do note that the Foot Guards 'reversed' their colours.  They go by other rules I guess....
Here they are from the rare rear view:

The blank area is for the attachment of the commanding General's name label.  The dice frame can be seen on the right.  I shifted the label area over a bit more to the left as to give room for the command figures in the rear. 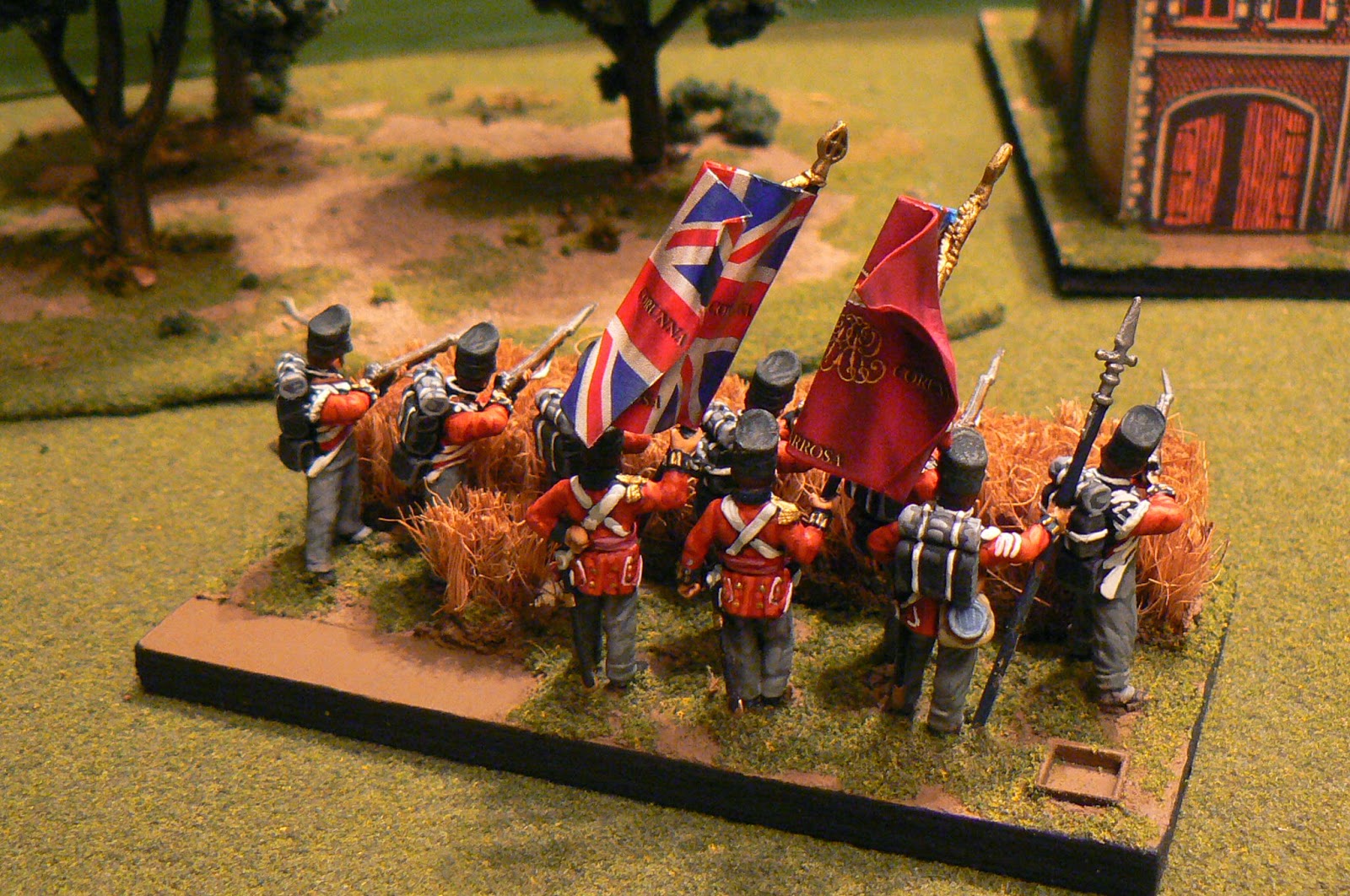 The Second (Coldstream) Guards have often been illustrated with white rather than grey trousers at Waterloo.  Some contention whether this was true or not, but as the debate continues, I rather got tired of painting grey and, as with the straw welcome mat wheat field of the First Foot Guards, the white trousers distinguishes the Guards on the table. 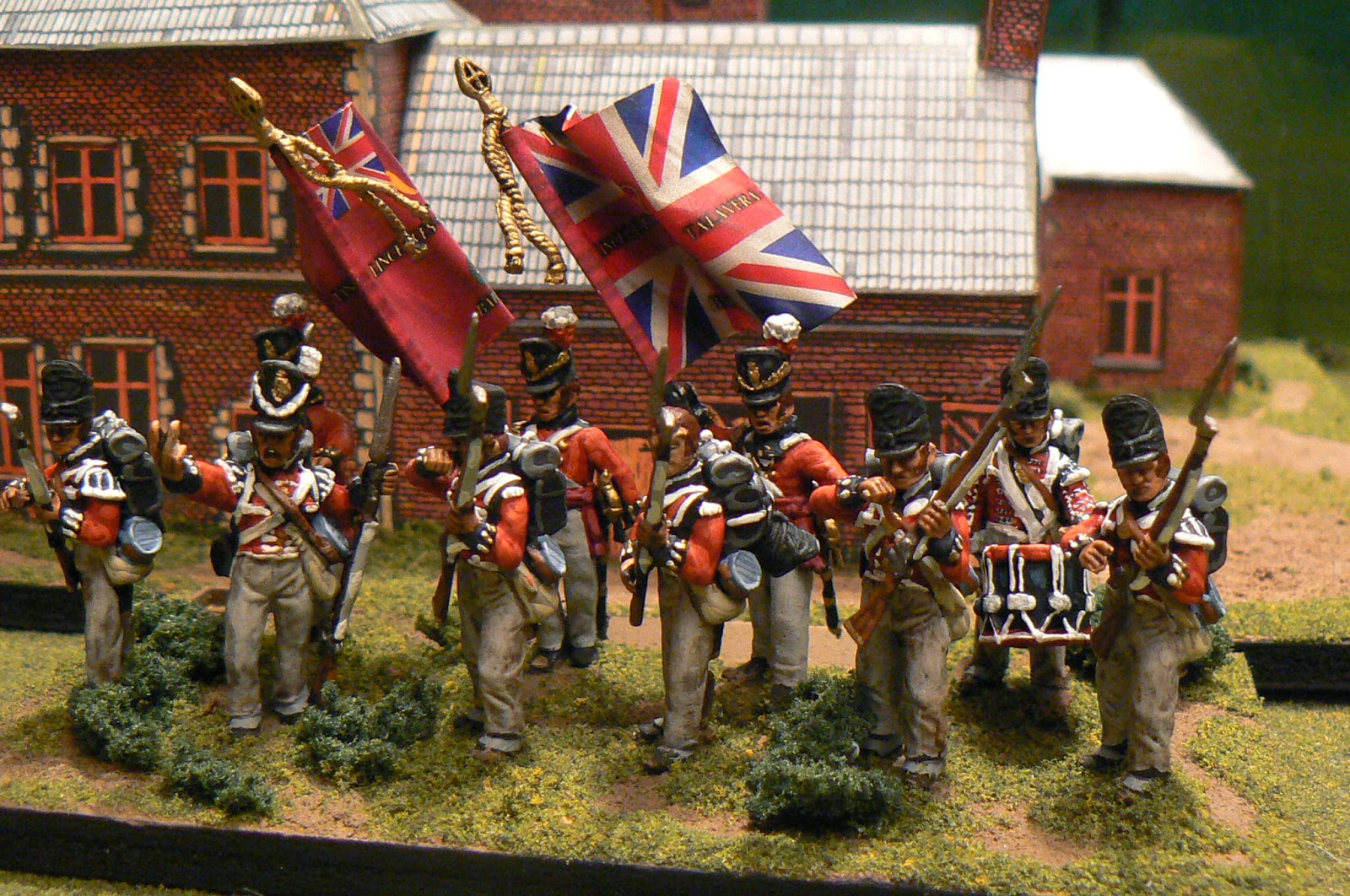 I am not a fan of the highlight style with large areas and especially with lighter colours and so I opted for a wash on the light grey base colour I used.  Certainly quicker and perhaps a tad more "realistic" being darker than the white I first thought to use.  The officer's trousers less 'dirty' than the rankers.

The "rude" guardsman from the Westphalia Miniatures set can be noted second from the left.  He is defying the French to take Hougomont seen in the background.
Posted by DougH at 01:09 No comments:
Labels: minis, Napoleonics, Plastics, Uniforms, videos, Waterloo Project

Refight of Battle of Montmirail 1814

With the plan for a game still in effect but with a necessary change in the number of players and their timing in arrival, I needed to have a smaller game with later arriving reserves and so the 1814 battle of Montmirail in the campaign for France seemed to fit the bill.  Well, OK, minor changes required with my Prussians replacing the Russians and the newly painted Hanoverians taking the Prussian's place!  The French were still the French fortunately as my original collection was designed specifically for this battle.

With everyone with coffee and cake in hand,  I had the "umpire chat" with Bob and Ian commanding the Prussians (Sacken's Russians)  With only Ricard's French Division on the table, I told them that they were ordered to take the village of Marchais to open up the road to further advance per the historical plans.   While I did indicate further French forces were moving up, I did not indicate that these were the French Imperial Guard in great numbers!  Sacken was equally surprised apparently.
I commanded the Prussians of Yorck - my Hanoverians - which guarded the LOC for the army.  I took these as Yorck historically seemed to do little which is ideal for me.  Involved with the rules for the others, I often forget to move my own troops!

The "chat" with Dave commanding the French has him wanting to destroy the Allies.  However he has negative victory points for losses of Old Guard elements. Nevertheless he was excited to command an attacking ( ! ) force with good troops for once.  He had the quality, the Allies had the numbers.
Interestingly this battle had few cannon as the mud of northern France during this rainy winter of 1814 made the movement of artillery extremely difficult and only a few batteries were available to Napoleon.  The flat terrain of the area and no significant historical influence meant a flat table.  At this level of combat, the problems of hedges, minor streams and the like, are of no concern of the corps commander/player.  Makes terrain deployment easier anyway!

The Prussians I had deploy first. As they ARE Prussians I left the original command labels on the bases and so Thielemann = Lieven and Bulow = Taillsin's corps.  Ian also commanded Vassilitchkov's cavalry labeled as "Jurgass".   Ian and Bob decided on corps deployment lines and with that, placed all their meagre artillery on the right and left of each respectively thereby creating a 'grand battery' of 17 points ( ! )

With Ricard's Division holding Marchais, Dave moved the Old Guard infantry forward but was faced with the move by Bob holding a good position to his flank but the massed Prussian batteries to his front.  His moves by the very powerful French Guard horse were a bit less troublesome but he did have to pick his targets as not to get into an attrition contest with the more numerous Allies.  My historical holding back of the Prussians helped him somewhat but he still had to worry about this flank also.
You can read more from his blog at :  link  He writes an excellent report of our battles

The Allies numbers and good tactics were seeming to hold sway for the moment but I had planned for the later arrival of Barry after his early day shift.  I had him command the French Young Guard reserves.  Their arrival on the tabletop was predicated upon when he would show up!  His timing was good as it turns out.

A few more turns later, the Prussian horse were beaten from the field by the powerful French guard horse and one of the Prussian corps had collapsed.
The Hanoverians with necessary action required with the arrival of the Young Guard, tried to hold Bailly and Fontenelle on the Allies left flank to protect the line of retreat. Widely spread, attacks of the powerful Young Guard and the 'Red' Lancers of the Guard broke the corps eventually.

We forgot to plot the number of turns completed but all agreed there were many and so concluded that on the short winter days of northern France, night was to fall and the fighting concluded.  While a  minor French victory, it cost Napoleon three wrecked Old Guard elements.

A scenario with powerful but fewer French elements in a central position with more numerous but poorer quality Allies holding front and the flanks made for an interesting game I thought.

Much discussion again about the rules.  I suppose at this point the players all consider each game a play-test and so the rules are now always scrutinized!  Much of the discussion can be more about tactics than about the level we are trying to achieve with these rules, however all agreed they are coming around and are fun to play.  Most of the proposed changes are more procedural than any huge change.

I thank the boys for coming down and having a good game.  My motivation is revived.

Currently ( sigh )  there are not plastic Russian hussars on the market and metals are not light horse.  In my ever present desire to have plastic troops for light weight transport, I would need to create my own.  I have the riders from the Perrys French Hussars box.  The hussar is basically the same in every army in this era with only the headdress as a national distinction.  So with the addition of the kiwer, a Russian hussar could be made.  Then I hit a bit of a snag.  They did not use the wolf-teeth sheepskin saddle cloth of the French but rather the pointed cloth version.  Darn.  Hmm, well, scrape off all of that from the French horses?  Lots of work that and ugly if experience will suggest.  But the local store had a box of FireForge plastic medieval Mounted Sergeants.  Having seen the news items I thought the horses could be modified.
So out came the blade and the 'Green Stuff'.  The medieval saddle horn was removed and the GS used to create saddle rolls - blankets, greatcoats - to give the saddle area some substance. Would not the practical Russians put all the valuable saddlecloths and plumes away on campaign and just carry the necessities of a greatcoat slung over the haunches?  Well, mine are anyway.   While the troopers legs fit surprisingly quite well, these rolls also served to cover up any gaps.

Here is a close up of the saddle rolls (oh dear, with the big lens you certainly can see my horse scrapings from removing a bit of the "medieval-ness" of the saddle... I have subsequently primed them already so I hope my thick paint work will deal with that!)
You can see the variety of the leg positions from the six horse halves on the sprue of the FireForge plastics.  I had a tough time fitting the separate horse necks onto the combined body halves, and thus hope my thick paint style will cover most of these ills.  They certainly look bad at plus 12 magnification! 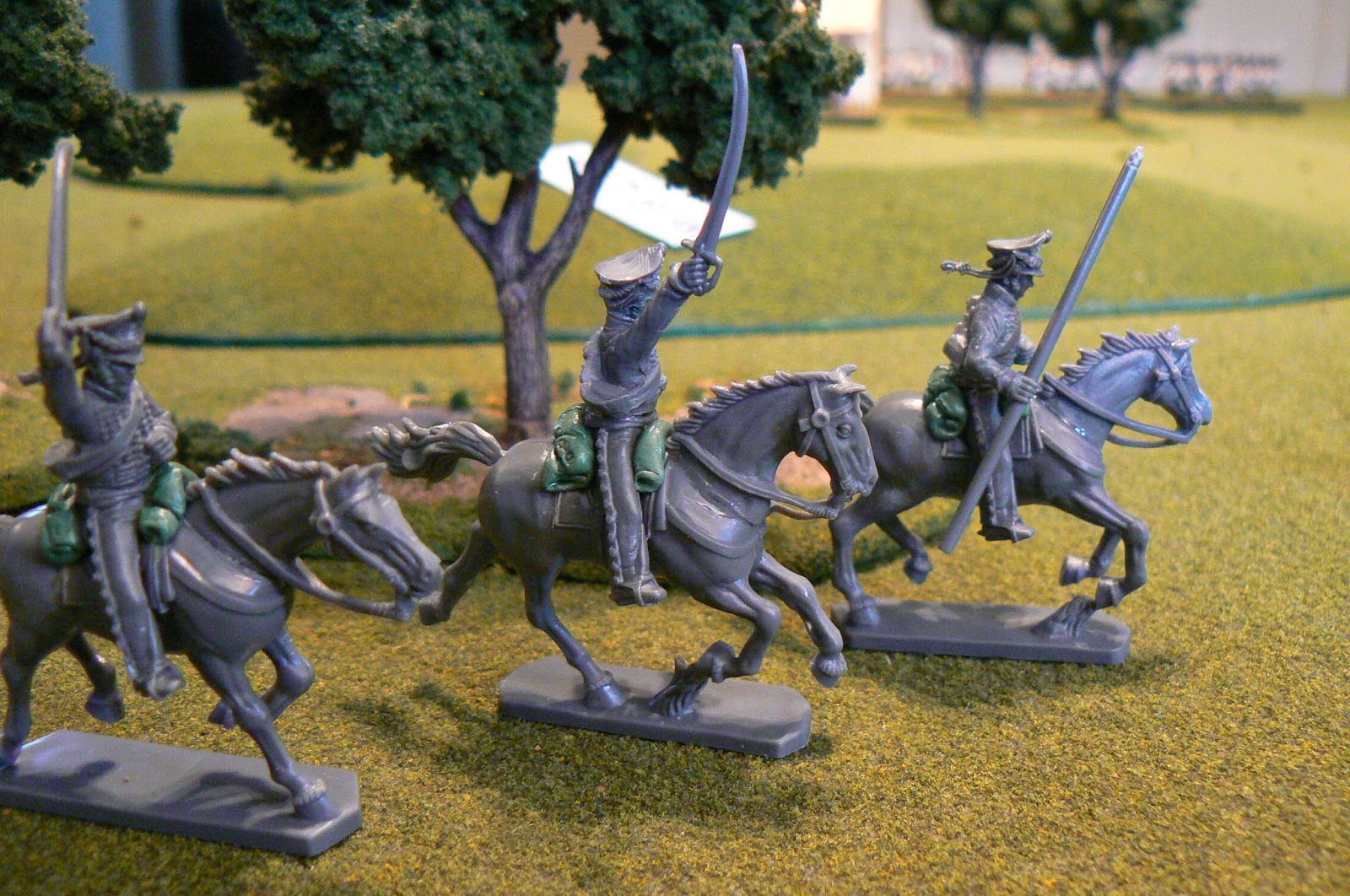 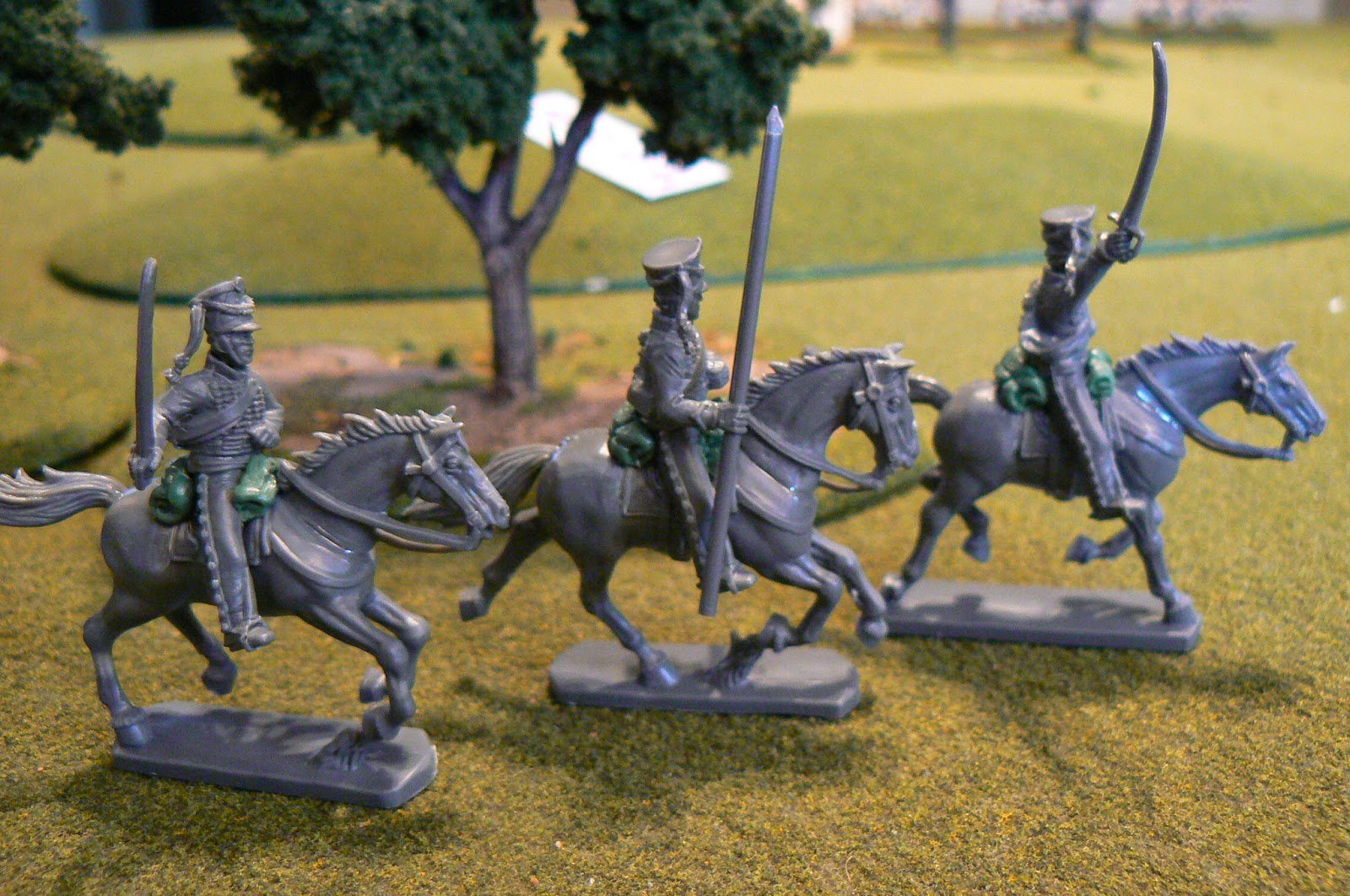 I have also show a shot of the Perry horse and the FireForge example (it is a medieval horse represented)
The Perry sprue comes with one torso without a right arm to allow for a trumpeter or flag bearer.  I used this to create a lance which was used by some in the units of the Russian hussars.  I clipped off the eagle from the top and created a tip.  A bit too thick perhaps but with a pennon, should look the part.  I gave one per unit.
Finally we have a pack mule. 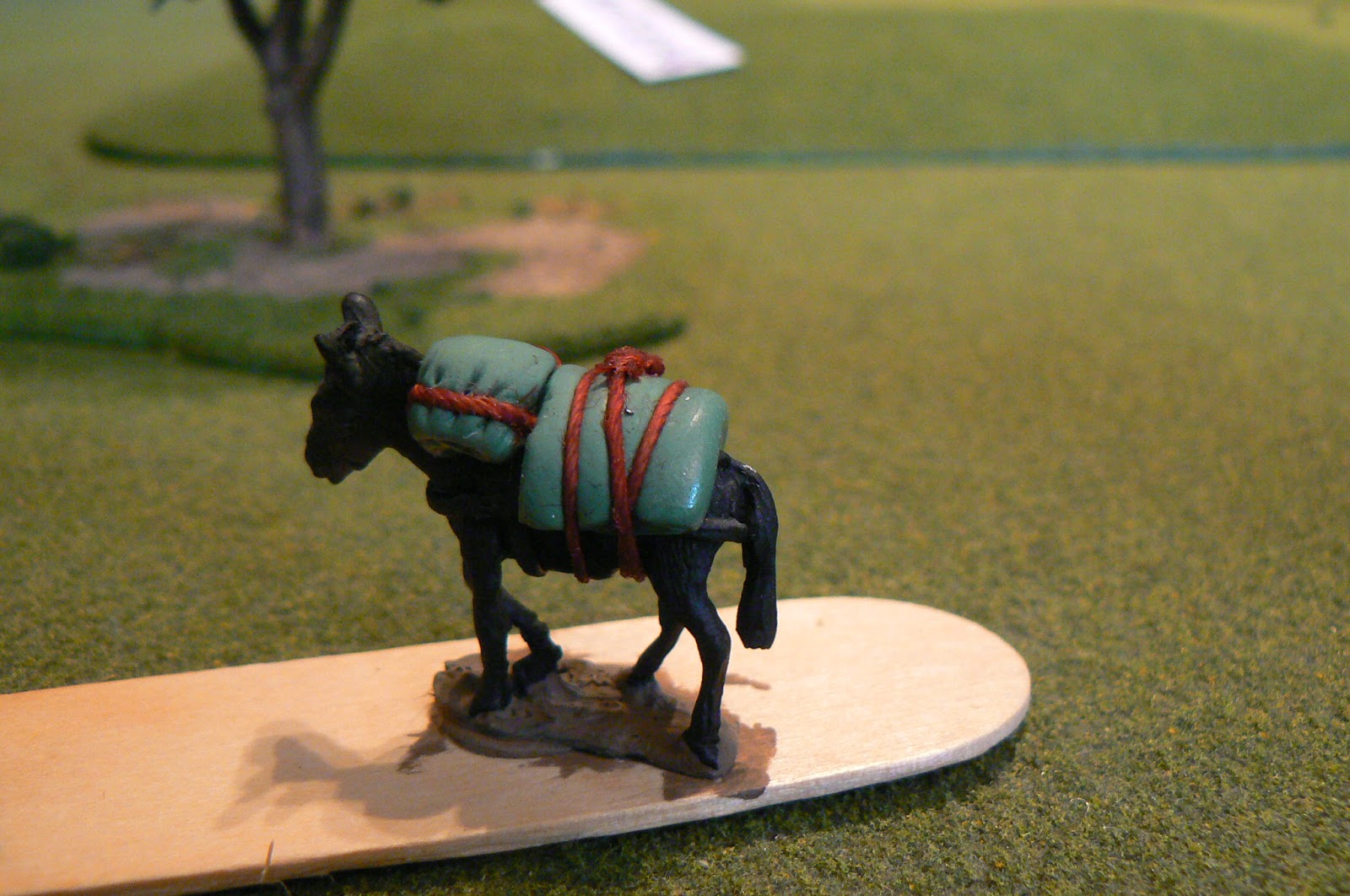 Why the mule? Well, as usual, I overestimated the amount of GS I would need.   However I ran out of time to employ it and so balled it up and tossed it in the freezer in a sealed plastic bag. By this point the GS had lost all of its stickiness anyway.  I had learned from reading about GS that freezing slowed the curing chemical process.  Being in the freezer for almost two days however, I was surprised that a short time in my fingers had warmed the ball once again into a fairly malleable state.

Useable now I  looked for something else to do with it as not to waste.  In this case, a had a previously primed mule and thought to add the rather large remainder as tied down items. I used string as the securing cords with watered down glue to make the string paintable.  Further GS 'overstocks' will doubtless be made into other mule's baggage items.