"I truly hope that puddle on the floor is from the ocean and not from your crotch, Kowalski!" intoned the tank commander to his loader.  But even he couldn't wait to get to the beach before thoughts of sinking entombed in this hunk of metal overcame him......

WillB, made his beautiful WW2 Sherman tank with a Rubicon kit which offers MANY variations. (link: Will's build )

Of course this leaves some extra bits left over.  Two of which were a hull (top only) and turret with a spare gun.  "Perhaps you might model a dug-in tank or something" he said as he offered the parts to me - he knows I enjoy the creative thought process of how to 'justify' any of it on the tabletop.   I thought about it for sometime and finally watched some video of the tanks in action and expert modellers employing some techniques to make it look convincing:  the tank in water, perhaps wading in on shore on a Pacific island beach.  Do I have a US Pacific War army? No.  Not even planning to have one which will be surprising to people who know me .... 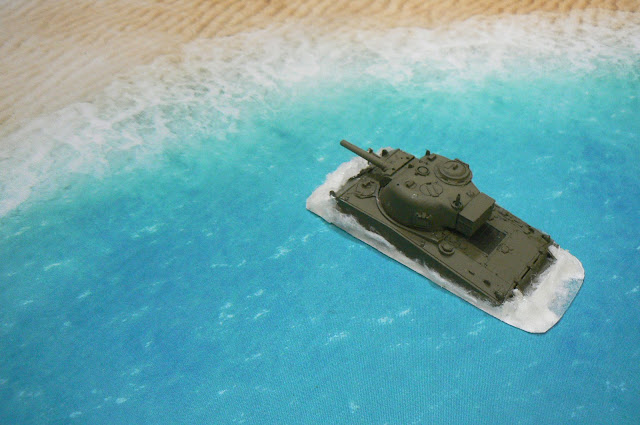 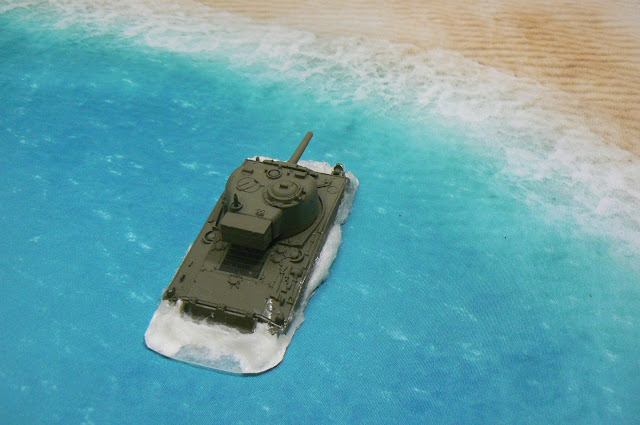 While I did watch the various expert modellers display their talents, they make it look so easy.  All I have to say is don't stare too long or hard at MY model!

P.S.  Photographed on my new "Island" neoprene mat.  And yes, from personal experience, tropical waters can be that colour!
P.S.S  This makes two recent posts where only the top half of 'submerged' models.  Hmm. But I do stick my head in the water while I swim nevertheless.....

Will Bailie, a wargaming buddy of mine has his focus on the Indian/Afghan area for some time now and has created his own imagiNation world of a Indian Sub-continent land called Jhamjar (yes, like jam jar... so lots of "food you put on toast" puns possible among others).  He put out a call for local fellow gamers to add a contingent should they wish within the confines of era and geography.  (Link: Jhamjar explained )

As I had some Boers laying about "without a home" , I decided to quickly base them for the task.
The following is my contingent's tongue-in-cheek backstory:


Major(recently retired)V.G.Might, late of the South African forces stationed in the Sinai at the end of the First World War, did not want to go back to Pretoria.  He felt many of his (former) command felt likewise.  Victor Might was dissolutioned fighting an ‘Imperial War”.  A dreamer and reader of grand adventures in the back and beyond of Asia and one morning, after a much gin-fuelled read of “The Chalice of Hunn-Nee”,  began his recruiting drive.  He found a large body of men armed and looking for adventure and offered them images of riches and exotic lands.
Courtesy of his ‘procurement officer’, a rather daring individual who boarded commercial ships as they transversed the Suez Canal, asked for their shipping manifests (often at gunpoint) and removed whatever would be useful.  One such vessel was transporting suits of men’s civilian clothing. “Can’t be wearing our old khakis can we?”  To the Major’s liking, as they were of somber tones; to these were added bandoliers and, of course rifles, by far the easiest to obtain. Razors were rare however, much to some of the men’s delight.
The army was given its employment the day when the Major’s second, Piet Rasponse “Rasp” Berry asked scratching at his growing beard, “So where do we find this chalice?”
Might did not look up from his worn atlas of Asia, “Well, Rasp, the Huun Nee is thought to reside in the Bai Lie Temple somewhere in the Imagitush Mountains.”
“And how, pray tell, do we get to this ‘Bai Lie’ place?” asked Rasp.
Pointing a finger somewhere on the old page, Might responded, “Through this Jhamjar region it appears.”

…So there is my backstory to why a bunch of Second Boer War figures would be in a remote section of Asia. But how they are to be deployed, whose side are they on, and their quality is yet to be determined. 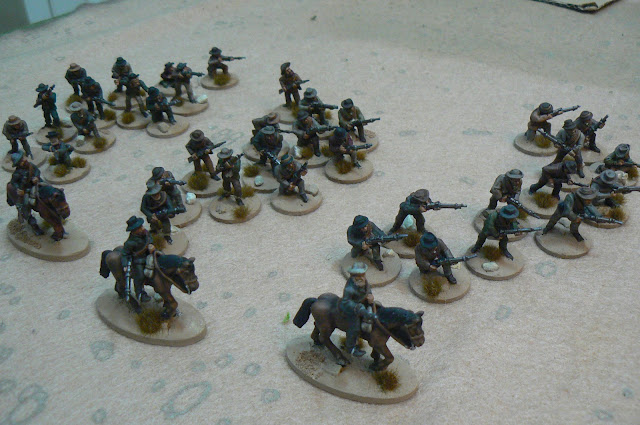 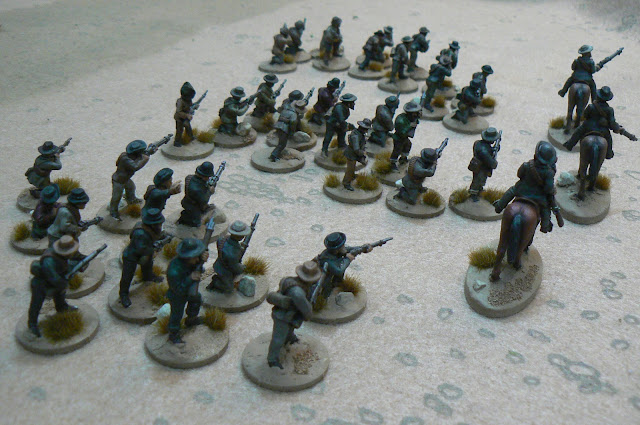 One of the scenarios from the "Rebels and Patriots" rules requires two engineer units of 6 figures each.  So I have one unit which is the process of preparing a river crossing while defending from enemy forces, and the other crossing the river to work on the other side of the waterway. 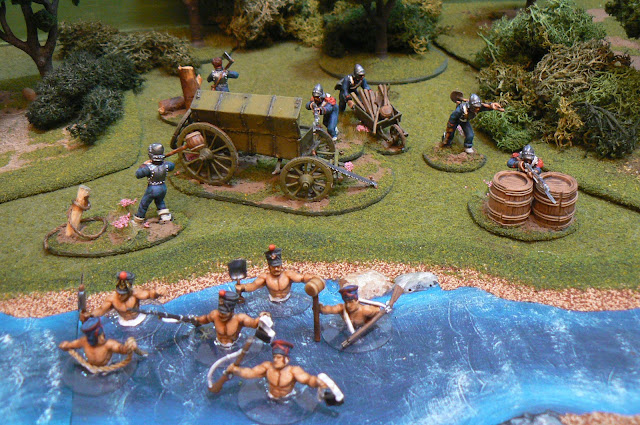 The clothed figures I believe are Black Hussar (nee Westphalian Miniatures).  The bare-chested lads are plastic ex-Warlord Celt torsos added to by the author.  A different headdress would change them to any era or army you wish.
Posted by DougH at 01:39 10 comments:
Labels: modelling, Napoleonics

Considered part of the overall “Saratoga Campaign”, St. Leger’s advance down the Mohawk Valley to join Burgoyne’s army was halted to besiege Fort Stanwix.  A relieving column of Patriot militia was ambushed near Oriskany and the battle proved to be one of the most deadly of the Revolutionary War.

In this engagement, the British allied Natives lined the military road and caught the Americans unaware but who fought back desperately having nowhere to retreat. 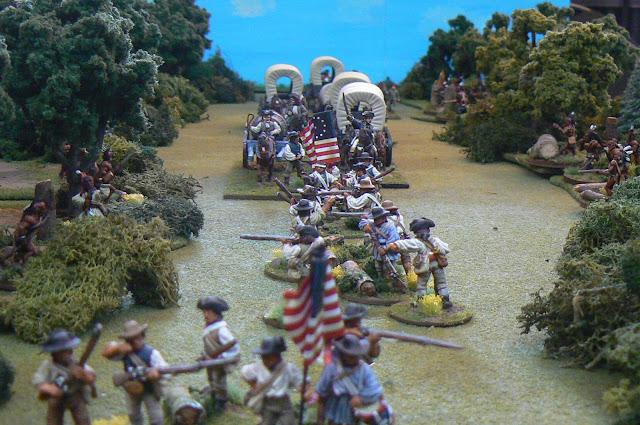 With that as a basis, I set up my version with the troops I have available including my newly rebased Old Glory Woodland Indians repurposed for my burgeoning AWI collection.  Thus four groups of small units of militia escorted the wagon train as three small groups of natives were, by a dice roll, placed along the route.  It was to be short range musket fire and hand-to-hand fighting in this solo game (obviously in this COVID era...) of “Rebels and Patriots” of 12 points apiece

The natives ignored the lead militia unit having targeted the second unit from both sides of the path.  Shattered by gunfire from the woods and unable to respond in kind, the Americans were charged by one band of natives wiping them out. This band, now in the open, were in turn charged by the officered unit who were successful in forcing those natives to retire from the fight. 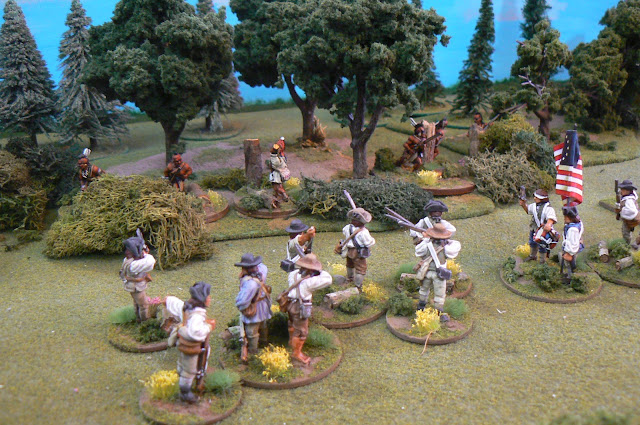 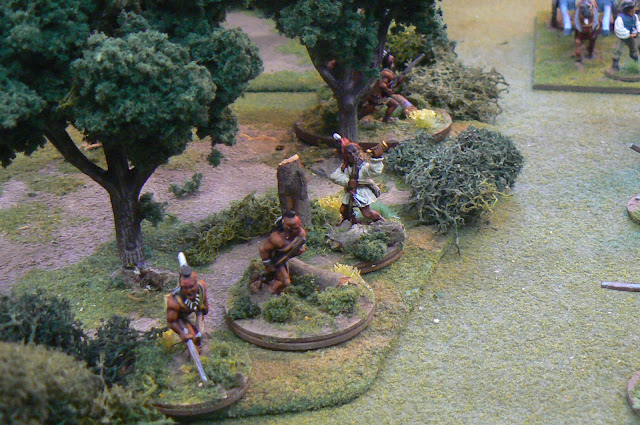 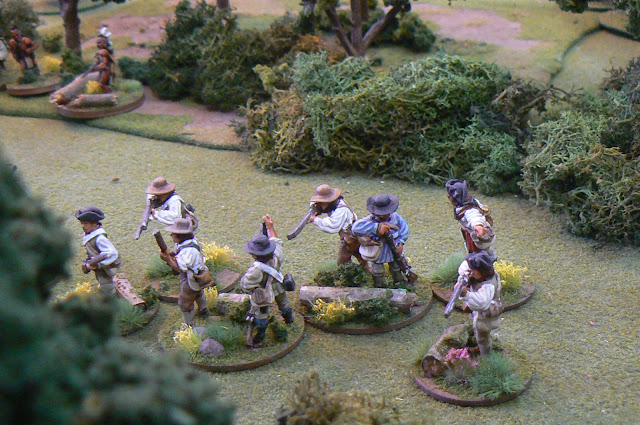 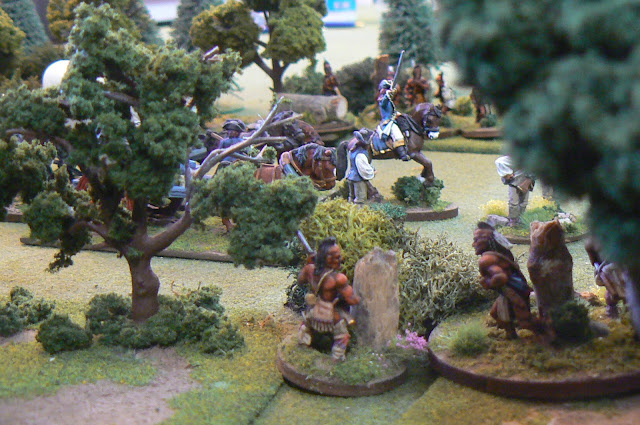 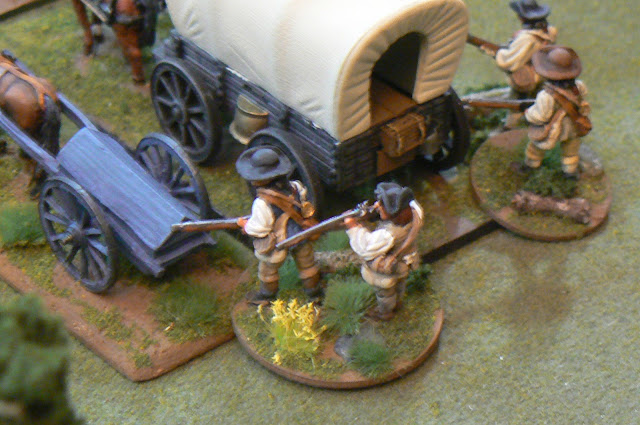 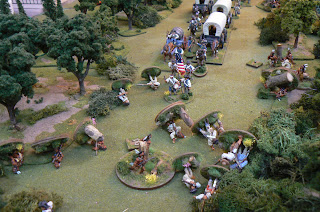 While this was occurring, to the rear of the column, the militia, who moved to protect the wagons, or ran to hide behind - you can make your own judgement! -  and the natives exchanged musket fire, slowly whittling away at each other’s willpower.  The natives broke first and disengaged, leaving the militia a shattered force holding the field with over a third as casualties.

Mon du, this water is cold!

I came across a small bag of rather roughly cut nude torsos whilst digging in my boxes.  These were remnants of the re-attaching correct torso to the legs of a large group of Ancient Celtic warriors.  Found in the club's B&B,  the seller had obviously randomly glued bodies to legs not realizing until too late his mistakes and then gave up on the endeavour.  Some damaged torsos from my cutting of the offending bodies was the result.

But now I took a second look and thought they could be used.  The attached heads of some were removed, the torque neck chain scraped off as were any wrist bracelets, etc. The hands were utilized if possible, or removed and replaced with ones holding various construction implements and some with muskets from spare Zulus arms, among other sources. 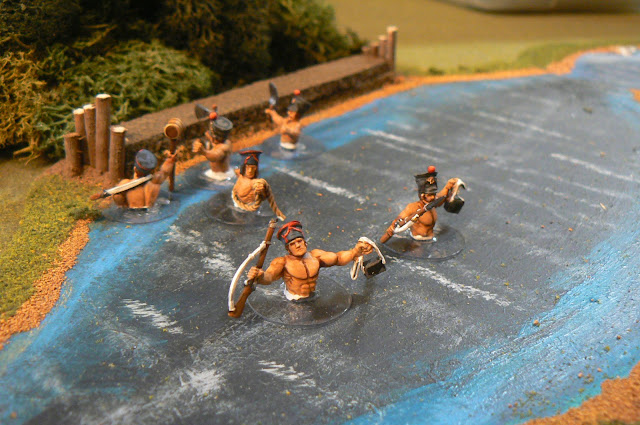 The rather exaggerated wide-arm pose of these ex-Warlord ancients was kept but justifying the posing was challenging!  Much far reach of the mallet or shovel.  Waist high in water and not wanting your 'powder wet" the figures seem to be wishing to keep them dry, their cartridge boxes are bits of sprue frame and paper belts.  I added some more belting to be held to one of the musket men as my wife thought he was holding a purse!  I agreed sheepishly, so needed to do that alteration.  But she does enjoy their manly physiques.

To make them ‘Napoleonic’ I added some of the many spare heads giving them mostly French forage caps.  These now can be added to engineering units building a bridge across any contested river. 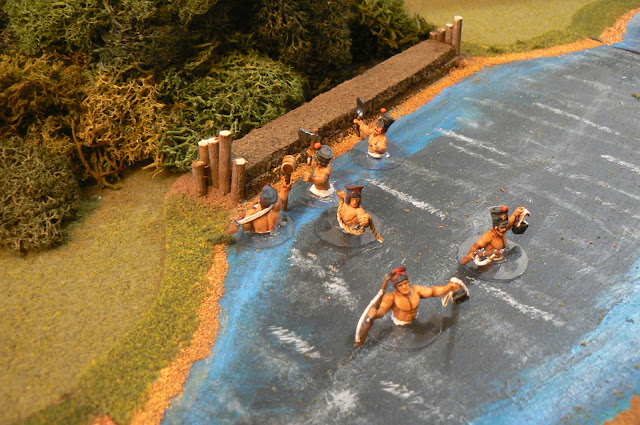 a dark and snowy tale


The inventory guy says, “If you are interested in the mat, you should buy now as the next shipment will be over 30% higher due to our tanking dollar.”   Does one need any more encouragement than that?

So I took it home, laid out my new neoprene(mousepad) mat and thought, “Oh dear, there is more ‘ash’ dust on this than what was showing in the packaging…”   Clearly I would need to decide on “the look” of my two winter projects - What a Tanker, 1941 and The Retreat, 1812 - 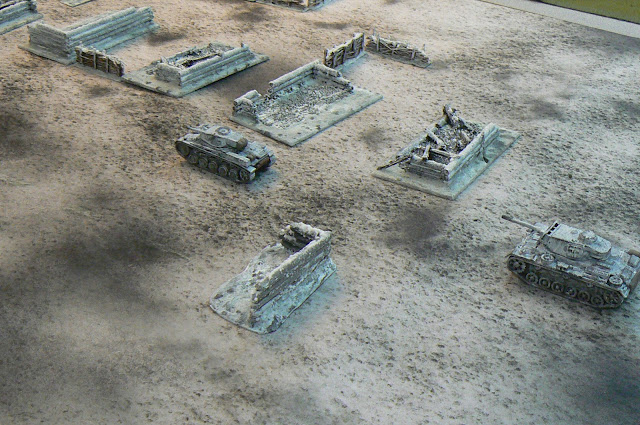 I decided to separate the two as the re-painting of the bases of the Napoleonics would be a challenge.  The Retreat would remain with the bright white sheet, with the snow covered church while my burnt out buildings, tank traps, trees and fences basing will get a darker treatment.

So with a sigh, I attempt to blend in my terrain to the mat’s coloration of spotty extremely dark patches.  While it was trying, the result is now a more self-contained game; a more dark and less white almost dystopian in nature but was not the Eastern Front at the time like that? 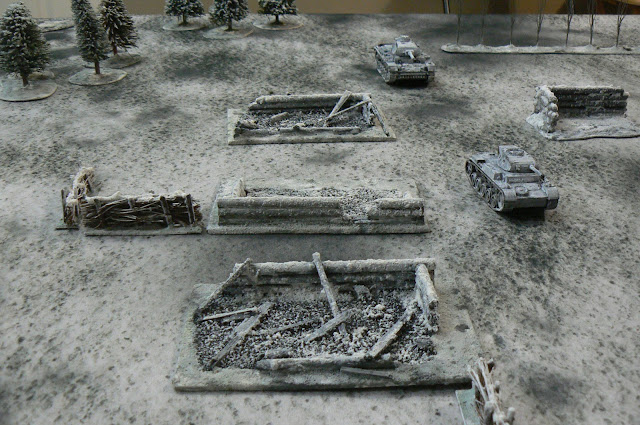