The Russian army is assembling....

( I wonder if the CIA spy-detection super computer picked up the title and flagged it ? .... )

Anyway,  I finally completed the first two of my infantry corps for the upcoming Borodino battle.  With a ~2000/base ratio, a corps does not amount to that many figures but does look fine on the tabletop.

I painted all the figures in rather large groups according to same pose then mixed them per base. Thus glued, then I painted on the appropriate shoulder board color and attached the correct flag for each regiment representing some which were in each corps' divisional OOB.  The proportions of grenadiers to line to jagers are as close as possible given the large ratio.

One might note that I decided to have my jagers in march order than indeed skirmishing.  If I expand my Russian army ( yeah, it might NOT happen...)  then I have some modified OG models (running at full sprint!) to fulfill those lights elements; but the plastics are lighter in weight.

The 8th Corps under Borozdin:
4 grenadiers, 2 line, 1 jager, 1 artillery and the commander

The 4th Corps under Tolstoi:
1 grenadier, 3 line, 1 jager, 1 artillery and the commander

Speaking of the Russian jagers, they can be represented by the usual line troops as they were identical but for their black belts and green facings. (among other minor details) 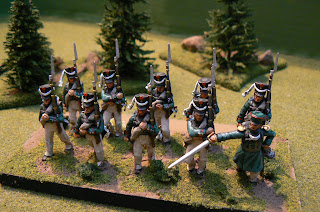 Only two of the seven infantry corps for the game.  I have one more infantry corps to do: Lavrov's 5th Corps -- and a few cavalry corps --- but the remaining will be completed by other players for the battle and thus they will have the exciting task of commanding their own figures in the game.

A rare military force - Swedes in the late Napoleonic wars

Sweden had an interesting place among the Allies fighting Napoleon in 1813.  It's king and army commander Bernadotte (ex-French General under Napoleon...long story that) was very keen, it would appear, to keep the Swedes near the action but not in the action.  Thus, outside of very minor engagements,  the only Swedish units to gain action in a major engagement was the Mornerska Hussars and a small horse battery at the Battle of Dennewitz. (and please correct me if I am wrong)
Leipzig might (?) be the only other battle but I think more only of a support role. 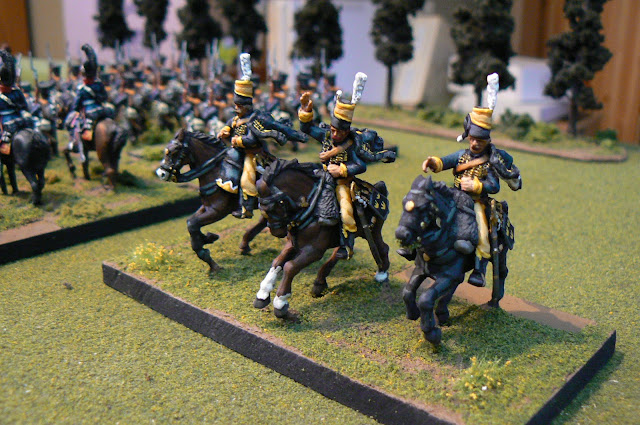 I had still a few bits and pieces from all the boxes of Perry plastics (every nation luckily has a hussar unit or two).  While I had one horse with the pointed saddle cloth on which the distinctive 'wolfs-tooth' design could be painted, the other horses were modified to a more campaign look. The one thing I was missing was sword arms.  I simply had ran out of them.  But I thought, were not the Swedes the 'neutrals' of the world?  Going into combat without a sword in the hand would be appropriate, no?  So arms were found from other sources and scabbarded swords were collected(ex for trumpeters and at one per box I am 'lucky' to have bought three boxes! )The Swedes were a bit behind in the military sartorial department so were still wearing the old mirliton headdress, colourful as that is. 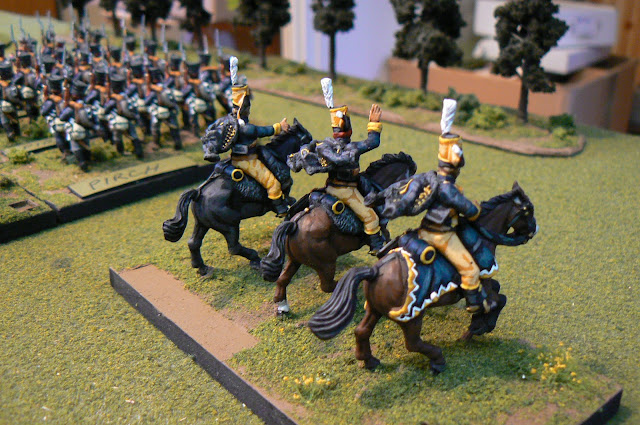 ......and how is NASA's lunar program like my wargaming hobby?  Spend loads of money, countless years of research, spend lots of effort to get to the moon/ collect a unit , then never to go back/ put in a box!
Posted by DougH at 10:53 6 comments:
Labels: 1813, minis, musings, Napoleonics, Sweden, Uniforms

I am currently painting Russians for the Battle of Borodino game.  Awaiting to complete the Jager units but looking to get the line units all "terrained" up.   Yesterday glued on the line units onto the bases when I had a few minutes.  I show a couple pictures to demonstrate how I do the terrain work.

A tutorial is at  link   .  The technique is quite simple but I hope effective to give a pleasing image of pastoral field cover and to blend in with the mats I use.

In my continuing mania to do every d*mned unit of the Napoleonic wars... or it would seem... I had some miscellaneous Victrix leftovers in the pre-1812 uniform but only a few. These are perhaps not appropriate for the French units for the late war 1813-15 campaigns, which are my focus,  but which were still worn by some French allies, including Neapolitans.  Thus I could create the skirmishing infantry of the 4th Light Regiment which did service during the 1813 campaign.

Of interest is the flag which I hand-painted some 20+ years ago (!) which I kept, having sold the army but still liking the design ( yeah yeah wrong inscription but still ...)

The all-light blue uniform is attractive way to fight the hordes of Allies during the autumn campaign of 1813. 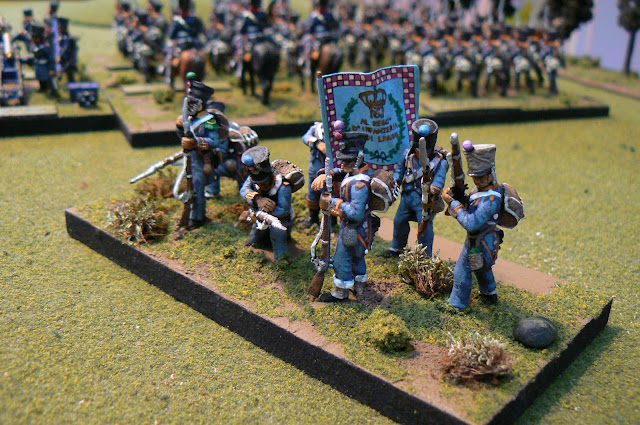 I carried in two hockey equipment bags, fairly light-weight, the terrain and figures (thankfully mostly plastic!) to the club's monthly meet to set up the historical Napoleonic battle of Dennewitz.  The scenario has the French (with Napoleon away to the south) moving toward Berlin with the Prussians counterattacking.

Bertrand's corps was caught across the muddy Ahebach stream with the rest of the French strung out behind him.  I decided on placing the commands in roughly mid-battle positions with the players allowed to place their elements anywhere within the rather large command radius;  even allowing contact within the first turn should they wish. Game on.  (but the players generally followed the rather more discrete course)


JimF's French Bertrand's Corps plunked itself on the hill north of Dennewitz and followed a cautious defensive stance while DennisC's Tauentzien's and Thumen's forces moved slowly to confront them.

To the south, the smaller commands of Oppen, Bulow (as Homburg-Hesse) and Krafft all under MikeB's guidance, went full tilt into the French (and their guns!)  As Dennis did in the north, the French commands of PeterM's Reynier Corps and KevinA's Oudinot's combined artillery to concentrate their fire - rather effectively from early large number of high dice rolls ! - to much weaken the Prussian assaults.   Eventually Oppen's command collapsed which allowed Oudinot to swing against the flank of Borstell.

With the Prussians forces strength waining and the French still holding the strong hill positions north and south of Dennewitz; and the player's seeing that the Command Morale Chart was not to be toyed with ( grin ) the Prussians ordered their withdrawal.

Not a historical outcome of course.  It is harder for the attacker to use their artillery effectively as it takes a patient command process to allow the artillery to set up, time to soften up the enemy and finally to organize the infantry and cavalry attacks.  The players, while all experienced wargamers and all having played at least one of my games and rules, still fall to the excitement and tend to charge forthwith.

The post-game analysis had some discussion about tactics and while related to the rules of course, (taken advantage of?) these were more tactical for historical play rather than holes in the rules.

The players seemed to like the scenario saying they still had maneuver space even if the forces were close to each other.   Not bad to have a large Napoleonic battle of 28mm on a 8 x 6' table.  I will downgrade the French forces a bit for playability.   At this point of the war, their units were understrength and tired and but find themselves in good defensive positions.

I will put on the game again at the big Salute convention mainly as I have put some effort in the organization and labelling and, more importantly,  have everything already packed!

Painting for a good time, not a long time.
With this in mind, the large ratio for our Napoleonic games has one to paint a mere three horsemen to represent a whole brigade of cavalry.  Surprisingly it looks good on the tabletop and allows us to play most of the larger of the Napoleonic battles in 28mm on the usual convention sized table (usually 9' by 6'or less) .

Many of the guys who have played these games in the past are excited enough to now collect a "corps" or two for the cause, as we are preparing to do the large Battle of Borodino in May.  One of the Russian formations which I volunteered to complete is Uvanov's Cavalry Corps, positioned on the right flank of the Russian army and were sent along with Platov's Cossacks to rampage against the French left.  I represent this formation with two elements of hussars: the Russian LifeGuard Hussars and the Elizabetgrad Hussar Regiment picked among the several regiments within.

The figures use plastic Fireforge medieval horses with added saddle rolls to give the troopers the campaign look and, frankly, to coverup the slight gap between the horse and the plastic Perry riders who themselves are a conglomerate of miscellaneous bits and pieces of French and British hussars with Russian heads. Some of the Russian hussars historically may have carried lances for which I used French standards with the eagle cut off and pennons added. I used these as I ran out of sword arms! 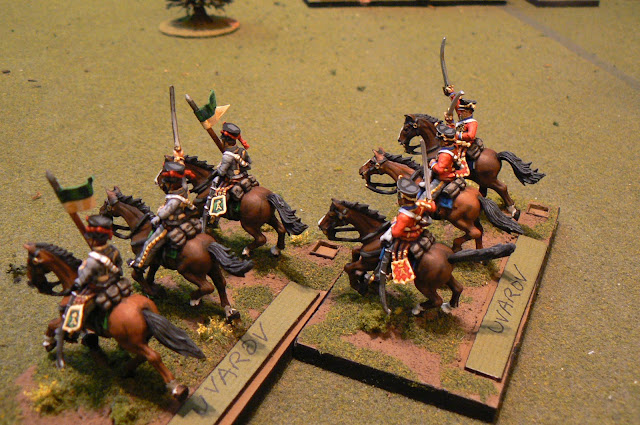