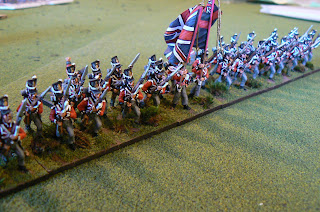 I have completed my British 89th Foot Regiment today.  Don't know why, but I like the black facing color.  Is it because I have always liked the red/black/white color combination or the fact that with the use of black primer, I have one less color to put on, I don't know....

This unit is important to the collection as it was the second British regular regiment which fought in the Battle of Crysler's Farm (War of 1812) together with the 49th Foot which I have previously highlighted.

Having now completed the 89th, I have all the components for this battle.
[one might note the lack of the flank companies.  They were not present at the battle and do not appear in any of the other battles, so I just didn't do them!]

The figures are 28mm Old Glory (with the exception of the standard bearers which are metal Victrix I believe). The flags themselves are hand-painted and have homemade tassels.
Posted by DougH at 00:40 1 comment:
Labels: minis, War of 1812

When I "disbanded" my old Plauche's battalion, I needed, of course, to remove the Stars and Stripes from the fragile plastic staff.  As I used white glue to attach, it was easy as I merely soaked it in water for a short time.
I did not have a plan to re-use, thinking I would need to toss it away.  However as it came off relatively intact, I thought to use it as a ripped trophy or such.  Inspiration struck and I placed it wet upon a casualty figure laying about. It then to my surprise re-hardened.
The flag would become a death shroud.  Perhaps our fallen soldier had heroically defended his nation's honor during the War of 1812.


Historical Accuracy Note:
The American 'Stars and Stripes' was not used by regiments but were used only to fly over military posts.  It was not until 1841 that it was made the 'national color' with infantry units.  The blue flag with the eagle and stars then became the regimental flag as one would see in the Civil War later.
Posted by DougH at 17:37 2 comments:
Labels: modelling, War of 1812

In what may be described as a wonderfully usual cockeyed move by a wargamer, I have "disbanded" my painted unit of Plauche's 'Uniformed' Militia unit of New Orleans (War of 1812) and transfered it to my Napoleonic collection to become several units within the French army-- for which the figures were originally designed .

However another project of mine is a Napoleonic army of French which is using only plastics on very large stands.  This is in conjunction with a fellow wargamer.  Thus the 1812 unit has been transformed into French units [not as difficult as one may suspect as I believe only minor uniform changes are required! <grin>]

My decision is somewhat tragic in that I have ordered other units for the New Orleans battles and have already made ready to paint up some many others. So this move has created an gap in my War of 1812 collection which I will 'need' to fill.


The Battalion d'Orleans or Plauche's Battalion was one of the most colorful units in the American army of the War of 1812. The Battalion participated in the defeat of the British forces at the Battle of New Orleans. The Battalion was a continuation of units which had existed under the French and Spanish regimes and were reorganized by the territorial act of January, 1805. Napoleon had raised and equipped three companies of French Creoles in New Orleans in 1803 after losing Santo Domingo. It is probable that these companies became the core of the Battalion d'Orleans. New Orleans remained very pro-Bonapartist during
this period. They felt a special connection to him because the Empress
Josephine was a French Creole. Also, many high ranking Napoleonic exiles
fled to New Orleans after the Bourbon regime was restored in France.

After "the Battle" as New Orleanians called it, the Battalion changed it's name to the Louisiana Legion and remained in service until after the Civil War. Throughout its history, the Battalion was known for its resplendent, colorful uniforms of French design. The Battalion was modeled on the Imperial French army of the Emperor Napoleon I. They used the same drill manual and closely approximated the French uniform. Indeed, many members of the Battalion were veteran soldats and officers who had served with Napoleon before moving to New Orleans.

The Battalion consisted of two centre companies (Francs and Blues, an
Irish company), two flank companies (Carabiners and Chasseurs) and a
company of Dragoons. The flank companies had uniforms based on those of the French Imperial Guard. The centre companies were dressed as the line. The Battalion also had its own flag, adjutant, surgeons, fouriers, and band. A description of the unit's flag in the 1820's describes it as having the words 'Honneur, Patrie, Discipline, Valor' embroidered on it.

Today, the Battalion is a group of 1812 re-enactors who recreate one of
the most unusual units in the American Army of the War of 1812. They currently have a Carabiner company and a centre company (les Francs). The recreated Carabiners are based in New Orleans and take part in events in the Southern theatre. Their  uniforms are based upon the Grenadiers a Pied of Napoleon's Imperial Guard. The Francs are mostly members of the 21eme de Ligne, 3e compagnie.
Posted by DougH at 02:05 2 comments:
Labels: Napoleonics, Uniforms, War of 1812

The Second Assault on Fort Lindsay

I did not dismantle the Fort Lindsay terrain and rather thought the whole matter somewhat unresolved.  With the massed assault bloodily repulsed [see previous post], what could the British do to neutralize this thorn in their side?

I had gone out of town for the long weekend and therefore concluded the British would, lacking a plan, at least continue the bombardment of the fort with naval gunfire.
I allowed this bombardment to have some effect - a dice roll concluded that one of the American batteries was damaged.

The British had also landed trained light infantry to the landward side to invest the fort and prevent any reinforcements or provisions.  The naval fire also prevented any gathering of fresh water from the river. Thus four days and nights of this relentless cannonade had rendered the garrison demoralized and fatigued.

On the very early morning of the 10th, the Americans sought to break the siege by taking half the infantry to move out by cover of darkness.  An artillery piece was to fire canister into the woods to clear the way.

As the Americans prepared to form up for the 'sortie', an alert sentry along the beach side, saw dark shapes moving in the night and a glint of silver and a good dice roll later - Alarm!
The British choosing sailors for their night vision and adeptness of the boats, made this same evening for a night assault on the fort!

Hearing the alarm raised, Lt. Abrey, reacted by increasing the pace to a run (Gallant leader and 'Fresh' adding to make a 'Double Quick' effect for maneuver).
Onward the sailors came, the few and shocked American infantry only offering (with a poor roll) desultory fire. 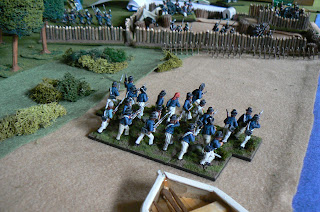 While the sailors raced up the beach, the 150 or so American regulars had noisily formed column (again a die roll)  while the British skirmishers formed an extended line along the tree line only to be raked by shots of canister by the US artillery covering the column.  Obviously well-sited during the day, (a roll of a 10 while in the dark!) the cannon hit the British with 'Galling Fire'.

The disordered American column formed up in the darkness and moved out slowly. (again, die roll) The disordered British still managed to bring 'Telling Fire' upon the Americans causing casualties and more disorder. The resulting melee had the British, with the advantage of being 'Fresh' and terrain advantage, holding off the Americans who faltered and fell back in confusion.

The sailors meanwhile, with minimal fire against them - the American artillery either assisting the column or firing out upon the harassing ships - charged over the abattis and using cutlass, pistol and musket, overwhelmed the defenders.
Fort Lindsay is now in British hands.
Posted by DougH at 19:01 No comments:
Labels: fictional battles, War of 1812

After successfully taking Plattsburg and defeating the American naval forces and thus gaining control of Lake Champlain, the British commander Prevost moved south to enter the Hudson River. However the fort on Morris Island at the mouth of the river barred passage. It would be a difficult proposition to take. Built on a spit of sand barely 100 yards wide, the battery was protected by the lake and by swamps and woods and could only be assaulted down a narrow beach.

The unproven deMeuron regiment of Swiss was selected to lead the British attack. Whether they asked for the 'honour' to prove their valour or whether as a forlorn hope to soak up casualties is not known.

Having given up on creating any more home brewed rules and going with a couple of friends who are using 'Regimental Fire and Fury' rules for the War of 1812, I used them for this game.

With 3 cannon and a 6 stands of infantry firing at the dense column of the Swiss AND I rolled a '10' the highest dice for effect, the deMeuron attack was shot to pieces and the colonel leading the assault grievously wounded ( a 9 was rolled for the leader!).  The attack by the 1st Foot behind was also 'checked'.  The deMeuron regiment surprisingly rallied only to be shot at again by long range artillery and to have me roll another '10'!!

Down to two stands from eight, the Swiss retreated broken, with the 1st Foot having again sustained hits as a massed target in support.  The attacked was then called off. 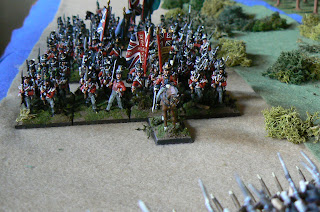 Notes: This scenario is based on the American Civil War attack by Union forces on Fort Wagner in 1863.  The movie "Glory" depicts this attack (thus the post's title).  The deMeuron regiment is substituting for the untried 54th Mass (colored troops) which led the assault.

I used a different name as not to give away the scenario's inspiration.  Lindsay Wagner was a 'hottie' from 1970's television; Fort Mozart doesn't sound American enough!

and finally, yes, the British indeed LOST the Battle of Plattsburg....
Posted by DougH at 00:43 1 comment:
Labels: fictional battles, wargames

The local annual gaming convention was held last weekend, "Leadapolooza" as my wife puts it, and I committed (was committed?) to all three days.

The following is a picture report

Excited about the 'green stuff' work I had done on these figures (previous blog entry: link ) I rushed ahead and did a quick paint job on them with basing to have them ready (I am getting to the point where I have no patience anymore...is that a sign of getting old? <grin>)

Anyway, while I dislike the work of Monet and van Gogh, my paint style has always been kinda 'impressionist'. It stems from my "get'um done fast, I got another thousand to go" style and thus I got the unit done in about two hours with another half hour for basing.  But I thought I give you the results of my 'green stuff' efforts. Trust me, on the table at two feet away it looks fine! :-) 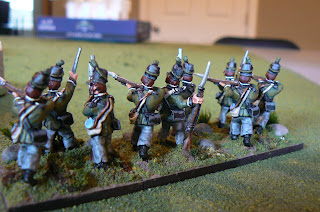