The ballpoint pen ran out of ink.  Of course I did not throw it away but I looked at it, took it apart and used the parts.  Hey, it is still part of the recycle, reuse, repurpose phrase is it not?  :) 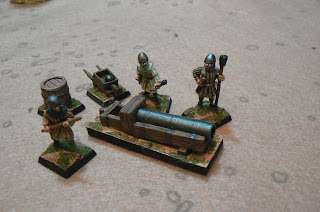 The main "chassis" on this particular pen is quite thick and the inner dimension of the tube not so large.  Medieval casting of a cannon sized actually, and needing a cannon for my crew I set to work cutting the plastic tube after removing the inner ink tube (that to be used to allow me to envelope with a flag thus allowing it to be slipped over an existing standard-bearer wire pole to have different flags for the same unit).

The cut tube was placed within a balsa wood frame, itself reinforced by additional bits to handle the cannon's recoil.  Metal straps were of paper softened by a water and PVA(white glue) mixture.  The whole was then primed and painted.  A very quick, easy project which I "needed" to do.

While that is the medieval 'modern' version of artillery, they still had the old-fashioned weapon very much still in vogue (at least for a couple more years) in the shape of the catapult.  Here is one I came across in the fantasy section.  It comes already primed.  While the wood is probably a bit rough and weathered for realism,  I will be using it for objective purposes for scenarios (I don't have any figures suitable as crew at present). 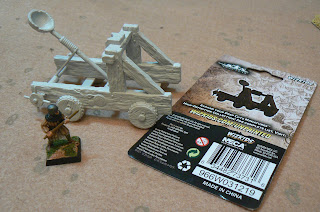 Just piddling away at the many diverse projects I have on the go....
Posted by DougH at 20:47 4 comments:
Labels: "Lion Rampant", equipment, Fantasy, medievals, modelling
Newer Posts Older Posts Home
Subscribe to: Posts (Atom)