While London England hosts its large Salute convention, Vancouver, Canada hosts its "Trumpeter Salute" three day convention near the same time.  I believe our 'Salute' name was first but not near as large or famous...

Aside from hosting a game, I played in two other games.  The first was Thomas' WW2 late war action in which I played a German commander holding off a serious British attack on a village.  His winter terrain was very nice to look at and gave a great feel to the game.  I remember one veteran wargamer gave me advice many years ago when he suggested "Only get in games which look good. If the rules are bad, if the GM is unsure, or if the scenario sucks, at least you have something nice to look at" 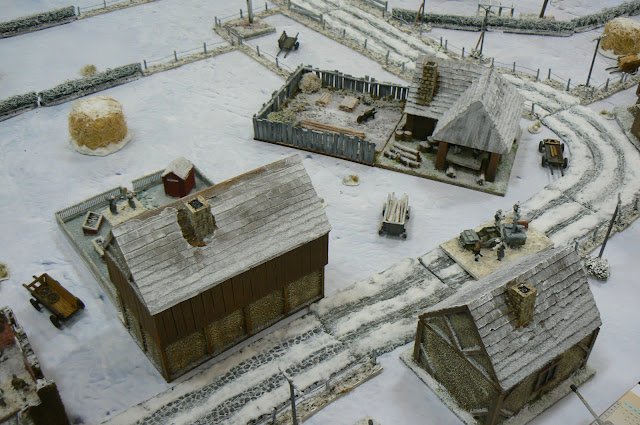 However, the 'Rapid Fire' rules under the excellent tutorage of Thomas and the straight forward scenario made for a good game; other than the excellent British dice (and tactics if I were honest) and our rather poor dice made for a rather quick game.

Examples of the balance of play:  I heard my German co-player moan to look to my right to see our mighty Tiger 1 tank, the glorious holder of our right flank, in flames!  Apparently lots of sixes were rolled by the British player firing his Shermans at it..... On my side, early in the game I had a panzerscreck crew jump out of cover to fire a surprise shot at the nearest British tank...it missed and was promptly shot to pieces. Later, my StuG moved up from cover only to be destroyed in the first shot and my AT gun in apparent hiding - at least I hoped- awaiting its chance after the additional British Shermans to cross the hedge, finally had to concede the enemy were content only to shoot up my infantry in the buildings, so fired a shot only to have it miss and have return fire kill most of the crew. Meanwhile I was struggling to find anybody to re-man the heavy machine gun - the only real asset the Germans had left,  from the continual British fire.  The game/battle was over in less than two hours. But it was pretty to look at! 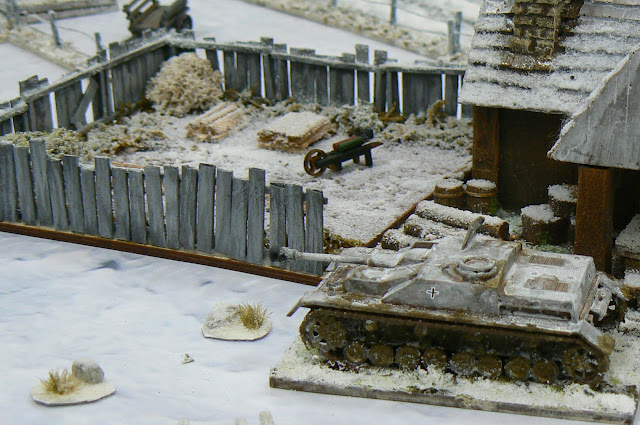 The second game was another of DennisC's ACW historical scenarios, this time the Union assault on the Sunken Road during the Battle of Sharpsburg/Antietam.
I took one of the Union divisions and almost (!) took the right flank of the Confederate stronghold but the local player, JimL, a boy who can pull high dice out of his a*s apparently by demand, always rolled a 10 to my 9 and in the ruleset of "Fire and Fury"one point can make all the difference.
In the middle, the rather weak Union division could not make headway against the small but strong force of Rebs holding the sunken road and so DennisC in his continual quest for history to repeat itself had his wish..... 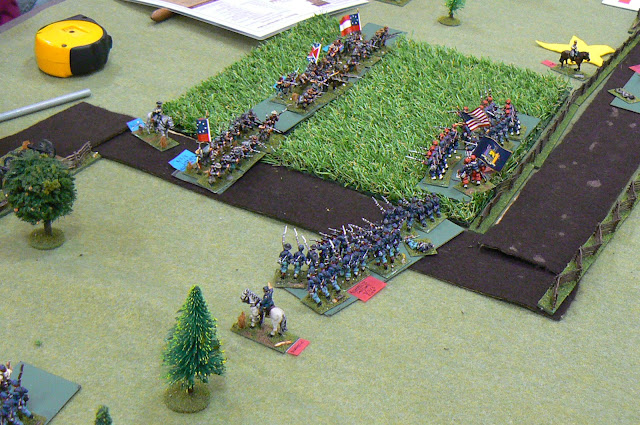 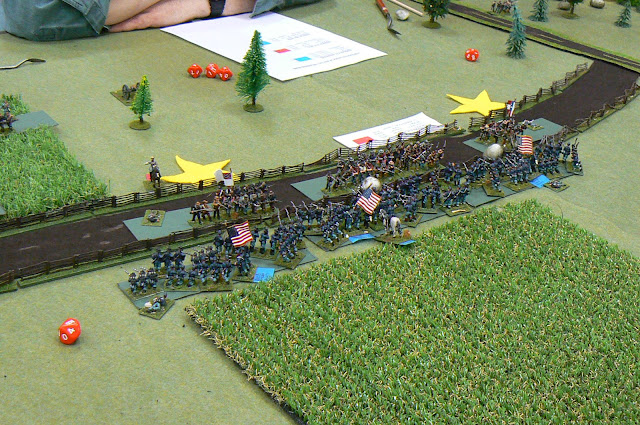 
Another “Trumpeter Salute” convention by the local Trumpeter Tabletop Society club is over and leaving me with a bit of a “wargamer hangover”  This can be described as a worn out feeling, sore feet, weak voice, throbbing head, aching back, and always that slight regret of not purchasing that good deal…..

I hosted my “Retreat from Moscow” game.  For those two fellows in the back row unaware of the history (or myth…) Napoleon’s Grand Armee consisting of most of Europe’s armies was making its way back from the disastrous campaign in Russia in 1812 and through the snows of winter.

The game has very simple rules using measuring sticks and lots of randomness which helps in the fun atmosphere. Because the Russians (mostly armed peasants but a smattering of Cossacks and Jagers) are on ‘auto-pilot’ they can act in unforeseen ways but in this game with my rather low rolls, generally did not give the Allies much grief.  This, at least to me, rather boring state of affairs would change when one of the players, having safely crossed the bridge with his two units abruptly turned about and starting shooting at his compatriots!!

Apparently he decided on gaining the ‘Vodka Wagon’ for himself and the points.  He had asked me before doing this nefarious act, if he "could shoot at any unit?".  I said “yeah, sure I guess” not thinking it would be his friends.   JimD, up from the States, after this action, said he moved closer to me so I would hold him back from lunging at “the traitor”. He later said he was really angry.  I totally missed his reaction and thought the whole thing amusing and made the game that more interesting…….

As a note I made up a rule, on the spot, about the bridge, over which they must cross lest they chance dying in the frozen waters of the creek, a chance of partial collapse.  1 in 6 chance.  Of course, it would break three times each time having a greater chance.  PeterM, our statistician, wryly was calculating if it were better to chance the cold water instead!