a Sengoku set to

Andrew brought over his Japanese to have a go at a Lion Rampant game.  In part it was an experiment of basing styles as his are based for Armati which he plays with the White Rock Gamers, and mine which I merely placed on pre-cut wood shapes of ovals and circles from an art store .  While my units had a greater arc of fire - the rules have range simply based upon nearest point - and I have wider units, it did not seem to have much obvious effect. ( as he was victorious ).

And the battle was a bloody affair with courage tests being passed by good dice...as compared to most of our combat rolls....

The scenario, as it was, to have Andrew take the village while I was to defend it.  The orchard and houses created lanes of attack so the battle had a form of north and south zones.  His primarily teppo  force  [ arquebus armed units ] moved against my mixed weapon [ bow and spear armed ] units in the 'north' while his samurai, both foot and horse, moved against the Takeda teppo and samurai in the 'south'.

In future I shall look at some of the more inventive scenario plans for perhaps a more interesting game but as a test, the rules work well for the period as we simply used LR attributes.  My archers did seem to do a bit better than his teppo inclusive units so might increase the arquebus power as the Japanese of the era gave the firepower more like the flintlock than a medieval handgonne.

The Takeda arquebus behind their pavises however could not shoot well but Andrew likewise could not get his foot samurai to advance quickly - or in Lion Rampant terms...failed activation often which gave me another turn to fail to inflict casualties!

Speaking of activation, we employed the two and out rather than having the first fail to stop your turn.  Much better feel - more to the player's frustration level than to the game play,  but the game is
supposed to be fun...

Editoral note: originally written in September 2015 (!) this post was overlooked but the project still holds interest for me. As I have had nothing to post for awhile I thought I should fill in the gap....

Have no idea why my interest in the Zulu Wars but probably because I watched Zulu and Zulu Dawn movies in my early days and kept those images in my head.

Thus any magazine article about the Zulu and warfare involving that South African tribe strokes my interest.  An old wargame magazine description by Ian Knight [ Miniature Wargames  No.25 ] of the engagement between the colonists of Durban, Natal and the Zulu in 1838 had me thinking. (oh, oh, here we go off onto another "project" !! )

A Voortrekker deputation to Port Natal to ask the English Settlement for assistance against the Zulus was met with success. In 1838 John Cane and Robert Biggar with 14 other English settlers, 30 Hottentots and over 3000 native levies went as an expeditionary force in support to the Voortrekkers Commandos of Uys and Potgieter. (who were attacked a day before and were soundly defeated) After crossing the Tugela River the Expenditionary force came across the Zulu military kraal (camp) Ndondakusuka at the foot of the mountain but the lack of full resistance soon indicated that this was a trap and as dawn slowly appeared some 10,000 Zulu warriors appeared on the scene and fierce fighting ensued. The line of retreat across the river was cut off and the expeditionary force was surrounded. Thus on the 17th April 1838 ended the battle of Tugela,  Few of the expeditionary force escaped from this battle. 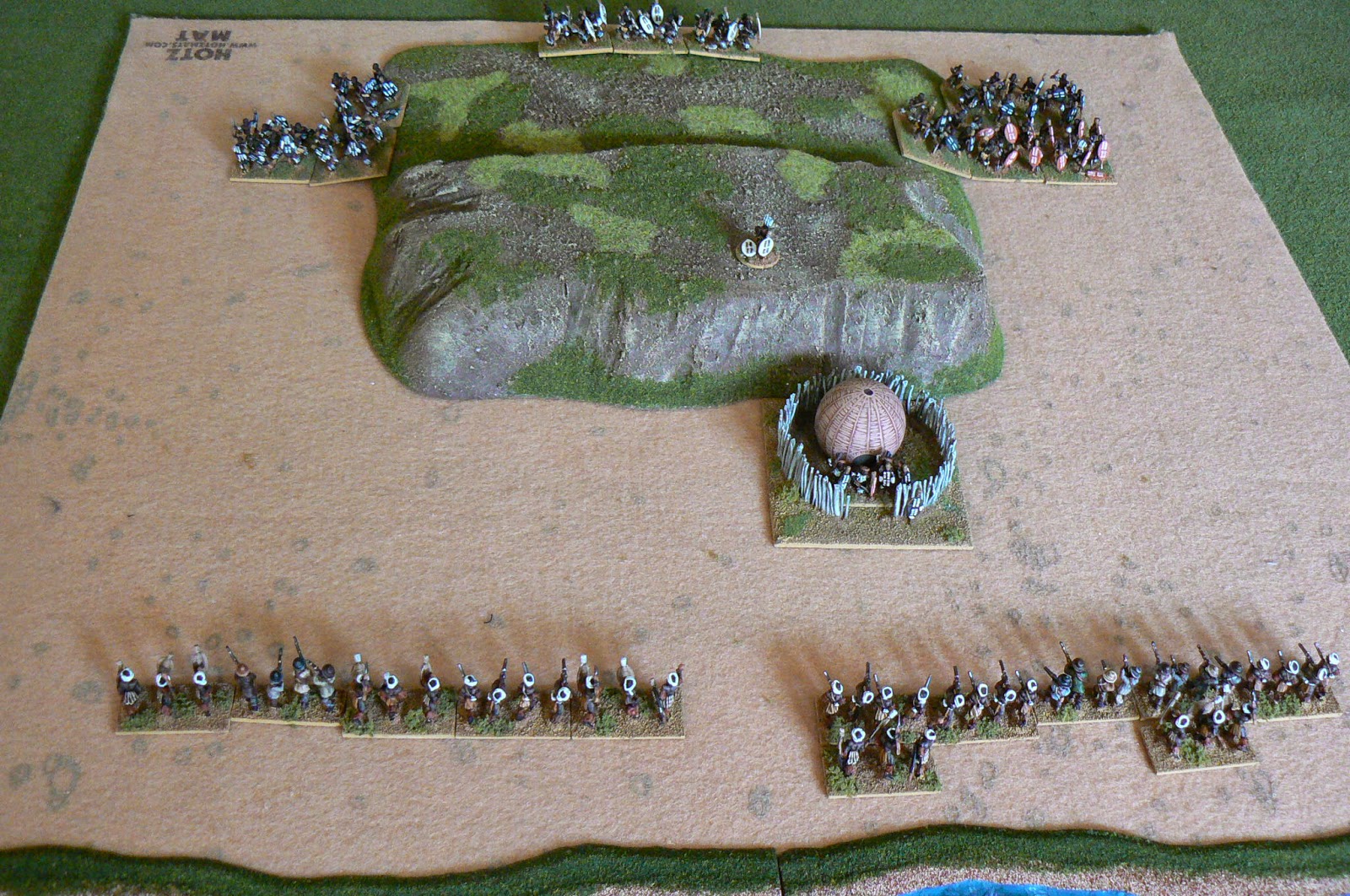 To distinguish the supporting Port Natal native troops, they were given white cloth head bands.  These "Hottentots" and some 400 of the natives were trained and armed with muskets, while the rest were armed as native warriors, some of which were Zulu expatriates.  This made the selection of figures easy and I simply added a green-stuff headband to those Natal allies. It was said that the natives would wind yards of cloth around their heads so the resulting headwear resembled a turban! This certainly helped in my modelling efforts as it is quite easy to apply too much green stuff to the small 15mm chaps. 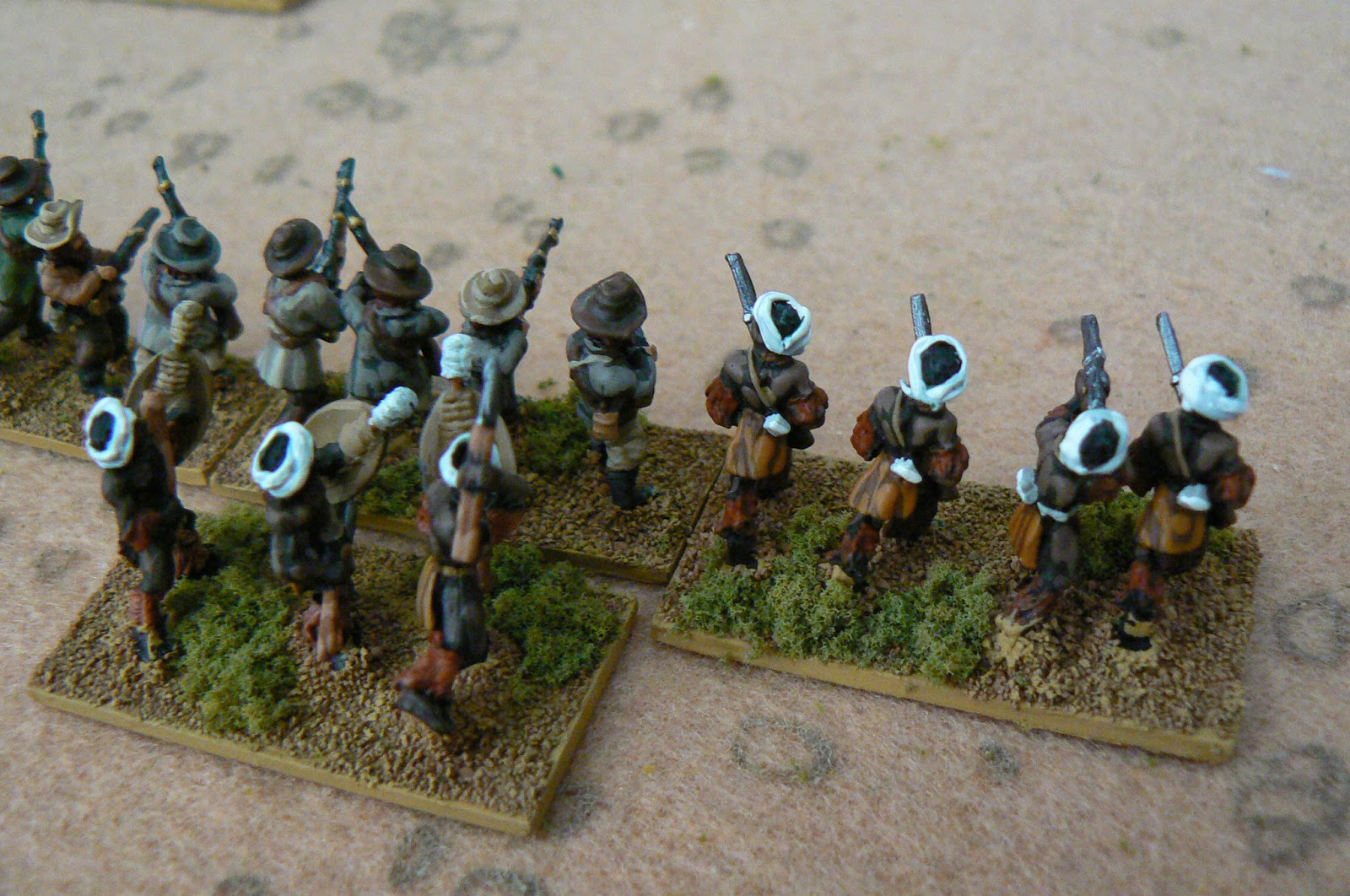 As with all my wargaming with the Zulu I use a heavily infused DBA style rules  (...thus far....) , so each force is of 12 elements - the Zulu look more numerous as I use double sized stands for them.  As I have yet to play this scenario I may indeed have them twice as large to equalize the effect from the Natal musket armed troops.   Because of the disproportional effect of firepower in the battles of this era, the Natal 'army' has 5 of its 12 elements as "rifle" armed, with the warriors equal to those of the Zulu.
The deployment is conjecture of course but does follow the DBA mandates.  The kraal starts with one additional defending element.  I may make the mountain smaller and closer to the Zulu side with the Natal army closer to the centre of the table.  In light of the historical battle, perhaps tell the Port Natal player that the idea is to save the army and not fight the Zulu....but the Zulu won't know this of course!
Not really pleased with the look of the table/basing and may change all this in the future but this small project is an interesting one for me.

Musings on numbers and bases

In the Lion Rampant rules, and while I have yet to exam, I must assume for TMWWBK rules also, hints are given by the author to increase or decrease the number of figures required for the game.

But really it comes down to the number of bases not the number of figures.  With that in mind, I mused about my 15mm Zulu collection and, having LOTS of Zulus but not all that many British, whether I could have 12 elements on each side but discount the actual number of figures that represents.  Let’s be honest, few of us would not envisage hundreds of natives descending upon the thin red line.  However with 12 figures for each opponent....well 12 vs 16 for the native but not that disparaging all the same.....it gives not that dramatic effect.

However if one looks upon each stand equivalent to a figure, then 12 stands is a unit.  For the colonial types these can be of a single figure; but for the natives one can place 3, 4 or many more on each.  These multiple figure stands still equate to but one “figure” for the sake of the rules, but now we are talking about 4X as many on the table and giving more illusion to the masses of natives opposing the few colonials.

Having my samurai at hand, I laid out all my multiple figure stands to oppose the singles.  Looks like a massive outnumbering but each unit has only 12 elements. 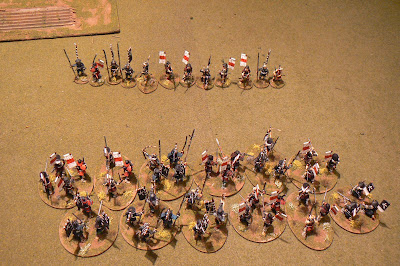 If I were to make the multiple stands a bit smaller, both units would have the same frontage/width and thus equal in the eyes of the rules.

Just musings at this point but something I will look into for the future.
Posted by DougH at 19:04 No comments:
Labels: "Lion Rampant", bases, Colonials, musings, rules, TMWWBK

What can one do in a limited space but with lots of time?  Heck, glue plastic parts together!  During the summer I needed to kill time and do it still while doing something of the hobby.  So out came the model glue and I attacked the Perry box of plastic late medieval mounted knights.  Later they were painted, again not at my usual painting desk, but in the rather unnatural situation of sitting in a bus.  Time well used I believe.  Anytime is hobby time! 😉