As Dave B. is an excellent sounding board ideas for developing the ongoing Napoleonic rules, a foisted upon him another Napoleonic game.

The Battle of Wavre was fought at the same time as Waterloo so gets little of the same treatment as it was considered a side show to Waterloo's main event.  Even the Prussians themselves knew this to be true and so left General Thielemann with less than his full corps to delay Marshal Grouchy ('Grew-she') while the rest of the Prussian army left to beat up on the Wellington's forces.

The Prussian defensive line was the difficult to cross Dyle River, so once again we are dealing with Napoleonic town fighting across the bridges at those points.
I took the Prussians as they were pretty well stationary giving Dave the more decision making French command.  Historically, Grouchy followed what he believed to be the proper course of action from Napoleon's rather cloudy directives.  After the Battle of Ligny Napoleon gave Crouchy who previously led only a corps of cavalry, command over the infantry corps of General Gerard and Vandamme both of whom were heavily engaged at Ligny, along with the cavalry of Exelmann and Pajol.  Napoleon seemed to want to have Grouchy keep his sword in the back of the retreating Prussians while Gerard pressed for him to march to Napoleon's aid once the cannon fire from the direction of Waterloo was heard.  These two different actions formed the options - by secret die roll - which the French under Dave B. could take unknown to me, as the Prussians.  Thus I could not commit my reserves accordingly. 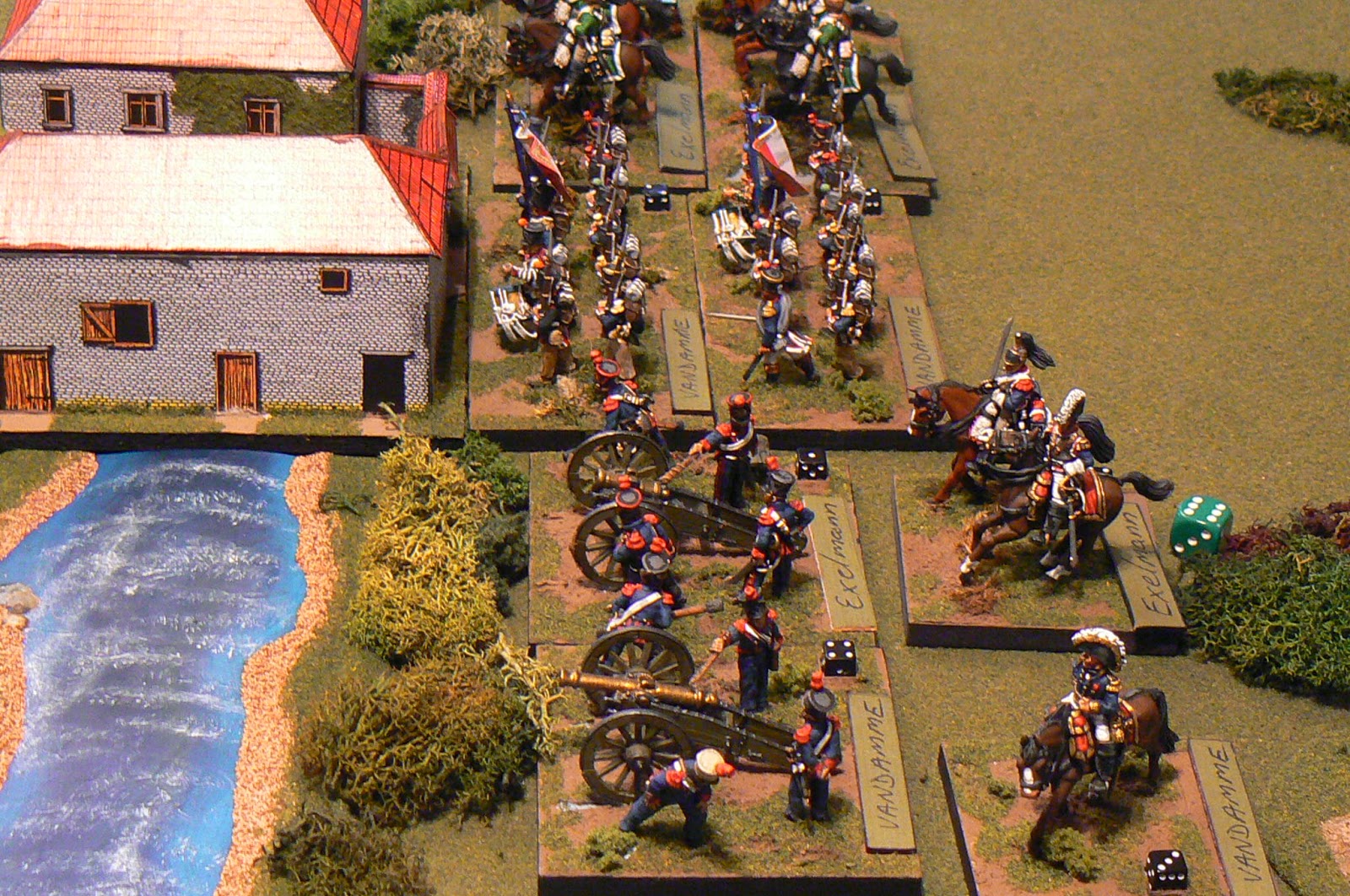 Now to be honest I did not have much choice in my reserves deployment, nor did Thielemann,  as he was seriously outnumbered and most of his forces were already committed to the defence of each of the towns forming the crossing points and so placed them historically.  Again, historically, the French had little idea of the forces ranged against them, so I felt justified in the scenario to have many potential hidden forces for the Prussians keeping their numbers unknown to the French.

As it was only a medium sized game, we ended up playing one and half-ish games rewinding the clock several times as we came to grip with different ways of handling the town fighting rules.  In the past we had town fighting a function of the normal open field element combat with an addition of overwhelming modifier for the defenders. Lucky dice aside, the only way to defeat any defender was to attrition them and so a "conga-line" would enviably form with a long line of attacking elements cycling through until the defender was worn down enough to evict. While simple, I felt it did not feel right nor was it satisfying play for the commanders.

So the scenario was kinda set aside as Dave B and I myself tried various options.  In the end, while it still needs to be tested, we came up with combat much in the same vein as cavalry combat with squares as in the defenders stay put until voluntarily removed or eliminated (not literally but as a cohesive body of troops).  Combat itself is simply a die roll-off without modifiers.  Elites only have more staying power.  A bit more to it of course but it follows the rules approach we continue to strive for in simple "convention game" procedures. The effect works however.

With much of the game in intellectual discussion, the scenario was not played out to any extent. I was worried about reinforcement timing as for the rules now more streamlined, can cause historical timing of forces entering the table to be difficult to establish.  This proved again to be the case and is but another item to be looked at, but the new town fighting rules might work now. Hopefully.

Based on a real battle in Russia, this scenario designed by Brandon and played over two nights, had the Russians attacking a strong German defensive position including a town (always 'fun').  The two victory points being the town and the extreme German left flank of the table point.

The following is not really a narrative of the whole battle but merely observation from my point of view.


Evening One:
The usual "what do you want to command?" allocation of forces with myself taking a Russian all-tank force as I don't often play their favourite "Battlefront" rules and so tried to keep it simple.
I was told to go attack 'over there' to the German left flank and so proceeded to move along the curvy roads gaining road bonus.  Now in the far, far distance the German Tiger tank fired and took out the tank on the crossroads so blocking that for all other use. THAT is the range?!  Oh dear.
Forced by terrain to limited attack avenues the Russians were forced "up the gut" and so I pushed my strung out tankers into immediate attack against the STuG and PaK 37 in the wood line.  Well they HAD been rolling poorly.....

Of course at this point Comrade Dave who had initially stated " yeah, yeah, move everything that way.  I've got the town", now started to despair about his chances of taking the town faced with determined German resistance ( read: good dice rolls)

At this point four hours and 6 turns gone by with the battle still in the balance.

Evening Two:
With the expected non-arrival of Sean, and the depletion of my force, I switched sides and took command of the German right flank holding the town.  I immediately went on the offensive to help what little infantry were left holding the corner of the town.  Ultimately while slowly losing hold on the town [ my first turn saw me roll three successive 9's to beat off a overwhelming infantry assault on my remaining town sector ], my panzers did some good shooting ( again, read: lucky dice )  to hold off any moves from within the town.
The overall battle was interesting as the Russian fire was so poor (rolling six successive 2's at one point of the game) that the German armour was seldom hit.  Brandon commanding the German left stated that his lone PzMkIV sustained 14 shots without harm. On the flip side, the Russian morale rolls were outstanding rolling 9 or 10 every turn!  The result was that the battle lasted much long than it have should as the Germans were still alive and the Russians tenuously holding on with meager resources.

After 8 turns and 8 hours of play the battle was declared a draw due to the location of forces at each victory point.

Highlight of the night:  Dave tends to be very demonstrative when rolling his dice.  Often he rolls the dice for firing with a loud "BANG!!" and with the usual result of a 1 or 2 ...rather than the expected 10.  Rather finding this silly, I suggested that he scares the dice with his loud scream and suggested he talk softly to them.  Sooo.. the very next roll he smooches them with kisses and soft purring of "I love you"  { yes he actually does these things. I lie not. }  And so rolls his one and I believe only 10 of the entire game.  Does he continue this sedate practice?  Heck, no.  Actually started using other, than the Soviet red dice, to make his rolls, to no greater effect.     Mind you, the group tends to blame you and you personally for any poor "shooting" i.e. random and unlucky low rolls, than the fates of the dice.  They like Armati and THAT is all dice so I should not expect less.  My bad....
Posted by DougH at 11:50 6 comments:
Labels: Monday games, musings, WW2

Ah, you say, there were no Saxon infantry in the Waterloo campaign buckaroo.  If you are trying [ed: wholly unsuccessfully]  to finish this one project before starting another,  why are you doing them?

Well, in a word: tartans.
I have but two more required elements to complete my Waterloo OOB. Yes, they are both Highland units.  Tartans are a pain in the... to do.  Rather have a tooth pulled.

So I am looking for diversions.  Being in grey overcoats and for the most part covered shakos, they proved fairly quick to do and, well, I will be needing them. Eventually.

The painted result is thus: 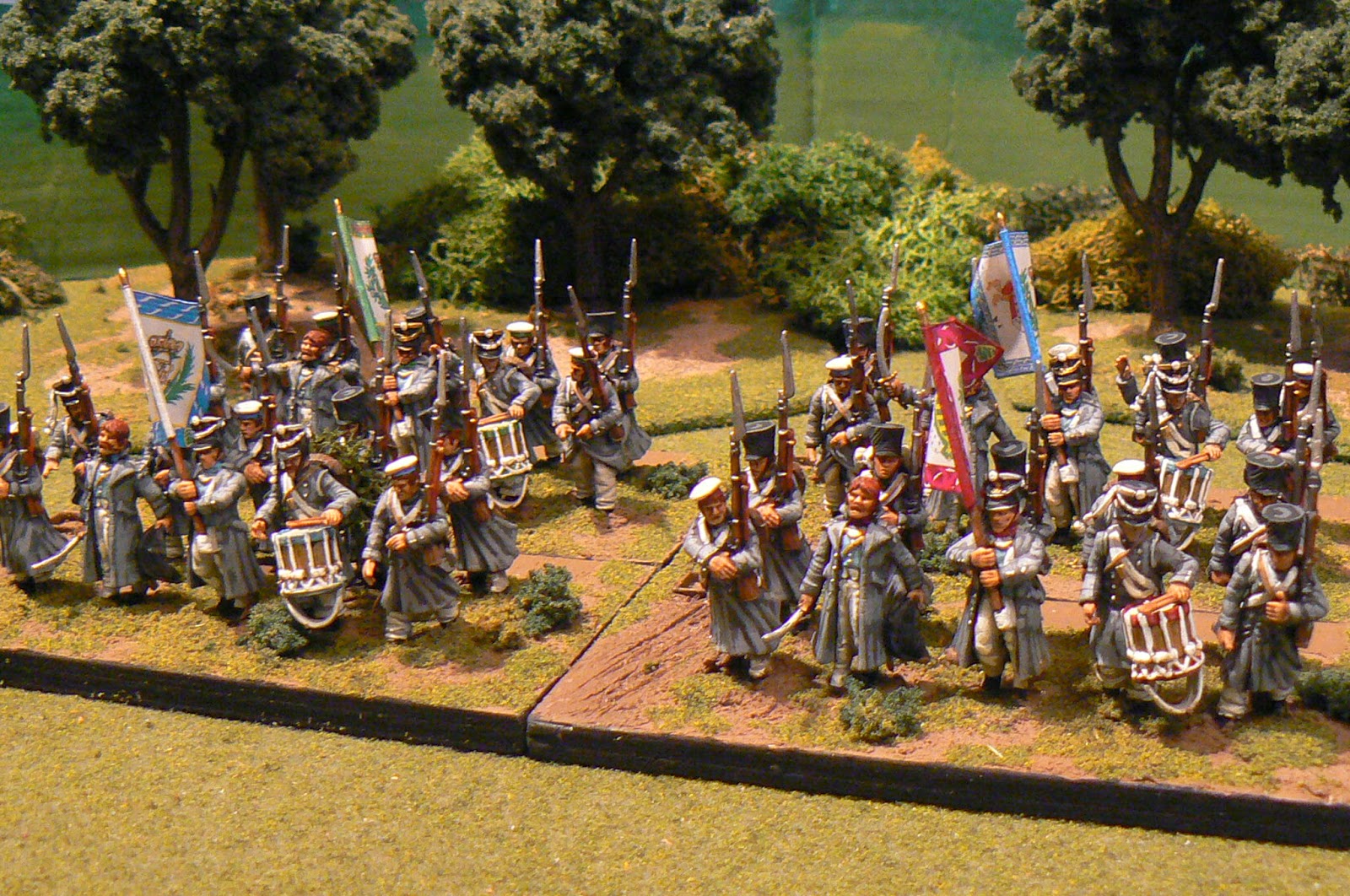 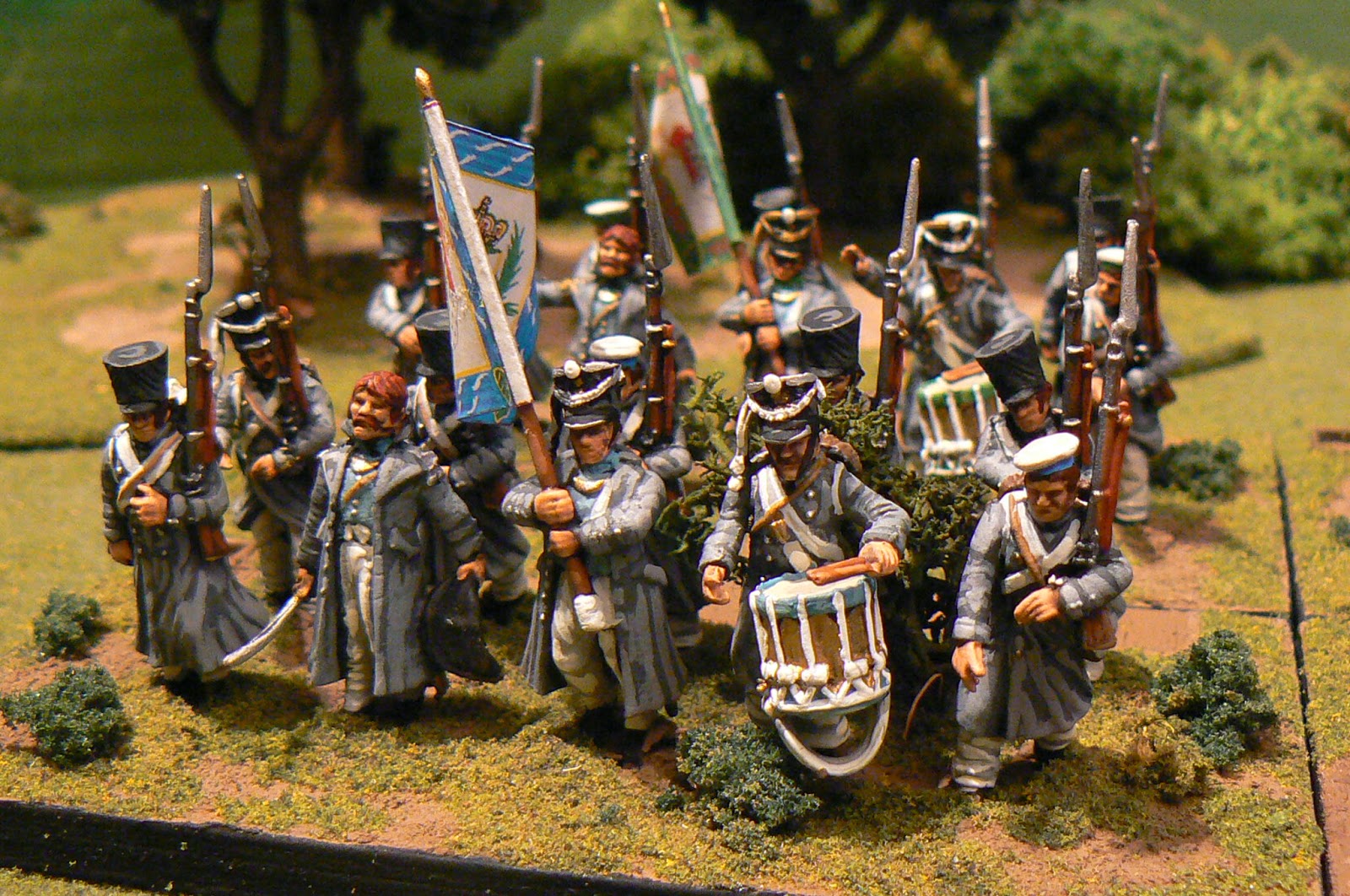 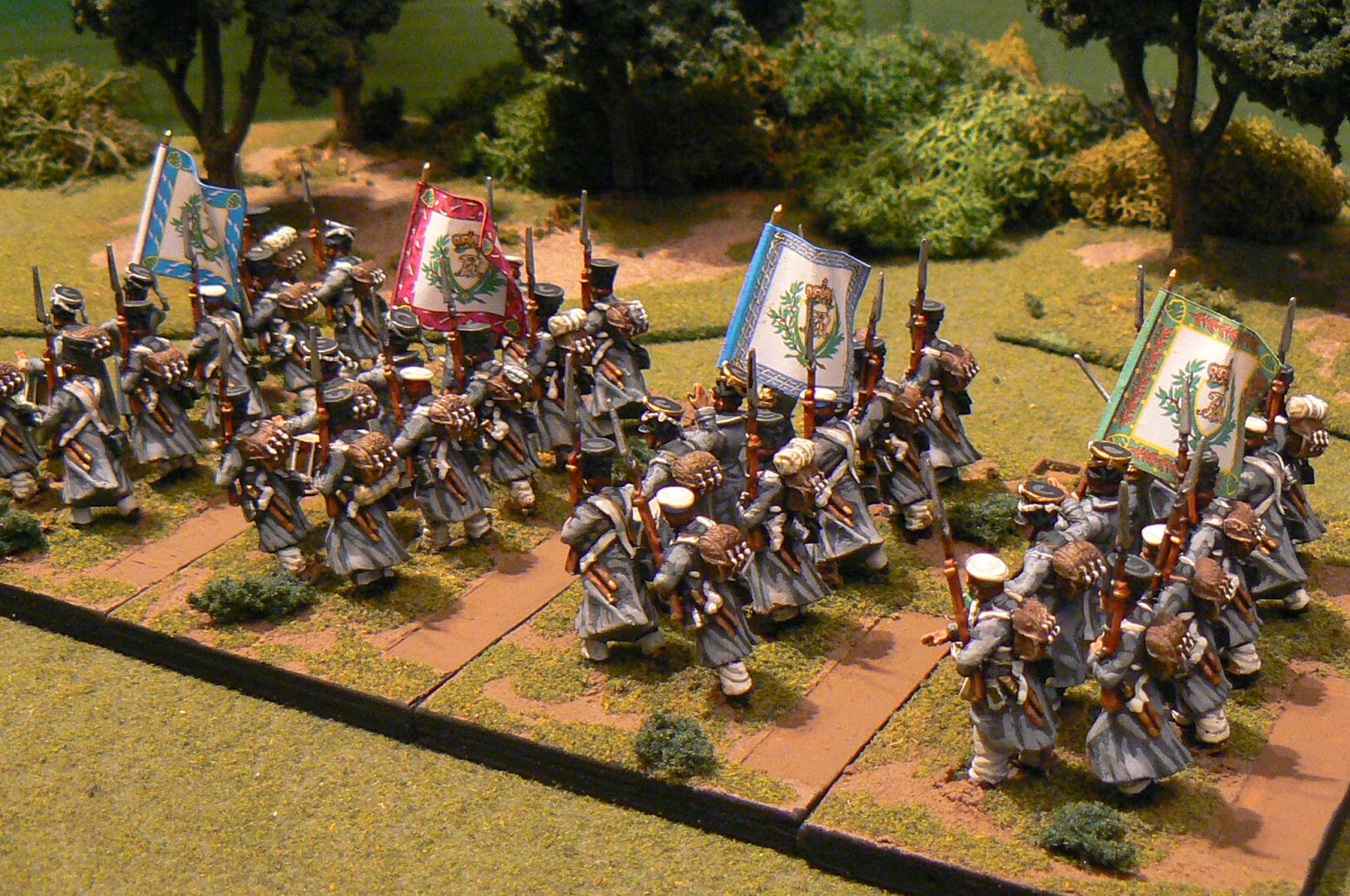 The flags are cut out of an old edition of Wargamer Illustrated article on the topic.

I have also worked the 1813 version of Wurttemburg infantry with them having abandoned the crested helmet for a version of the twin-peaked Austrian style shako.  The figures are Perry Austrians having the correct belting.  The shako was modified by removing all the cockade and oakleaves adding a plastic piece cut for the badge and painting on the other details.
The roll on the pack was removed as it looked too Austrian [they folded the greatcoat/blanket over rather than rolling it].  In 15mm, maybe not an issue. In 28mm, noticeable. Also the distinctive Austrian canteen was removed. Oh and the tunic was modified by removing the top buttons from under the cross belts to allow for the half-lapel worn represented by again, painted-on details. Not  much work really.  yeah.....

With the massive losses of Russia, I will need only the two elements of Wurttemburg infantry for any of the 1813 campaign battles.

OK, yes I should really finish the Highlanders, but with all the boys starting on their Russian corps, and to added to the Russian artillery I have done,  I thought I would do some of the Generals to get me going on this new emphasis. Terrain work to be done yet. [Old Glory riders on old Front Rank horses] 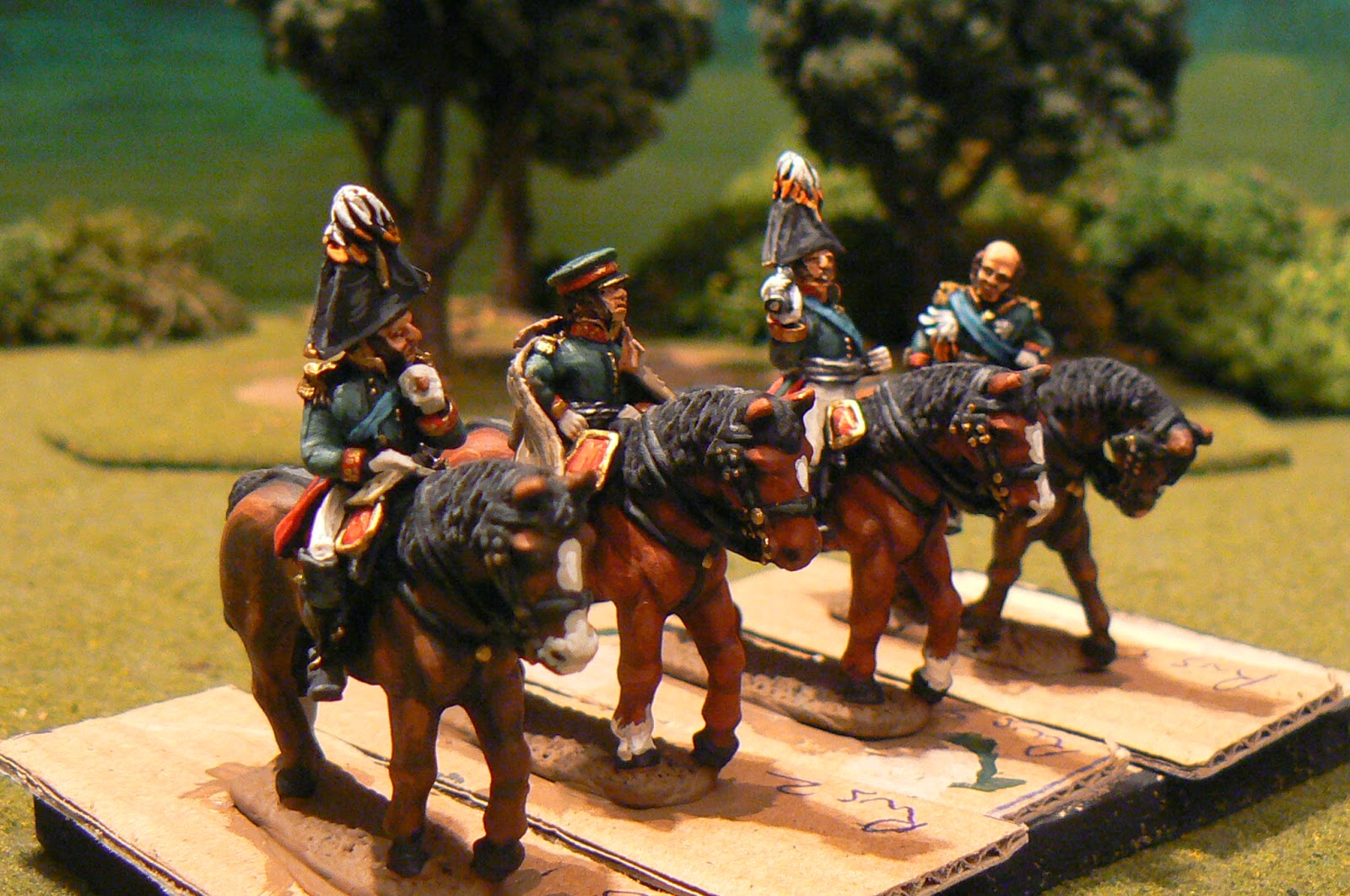