With the Highlanders completed [ see previous post ], this (almost) completes what I need to do a tabletop game of Waterloo.  Woohoo.  Let's consider it a Christmas present to myself.

With the 200th anniversary coming up next year, there will be a flurry of games by individuals, bloggers and clubs.  It should be interesting to tally the results and see if Napoleon indeed had a chance.  I don't think the manner of the rules will have much bearing.  I would hope that most will start with the historical set up and play out the game from the actual deployments; but as I plan to do, will also try the 'the French can do whatever they want' game.  Both added together should give a good idea whether Welly was good, lucky, really needed the Prussians, or Napoleon played it all wrong.

For the 8 x 5 foot table space available at the conventions I will only use simple green mats.  The buildings are paper models and the rye fields are cut up straw feet mats and are just to fill in some empty space.  A modelled ridge line is not used as it was certainly not considerable and did not impede or slow movement and does not form any defensive importance but rather only as a slight rise for line of sight. Thus the road forms that feature.


Now looking south from the ridge:
The camera seems to find lots of open green space while the human eye does not. Why is that? The tabletop appears much closer and better I must say, as I admit spending more than a few minutes gazing upon the whole scene, seeing the results of about a few years effort, made among other projects and painting.....


"Don't do it!  Think of your life! Think about what it will do to your eyes!"

Those were my thoughts to myself but there wasn't anything but to pick up the 000 paint brush and get to it. So after much deliberate delay, I finally got to the tartans...and all the British regimental lace...and the bleeping bagpipes.....

For the element's strength ratios of the rules, one can often pick and choose which individual regiments one will want to use to represent the entire brigade.  Well, for the brigades of Picton's Division I picked the Highland Regiments.  How could I not, actually.  They are THE units of Waterloo. 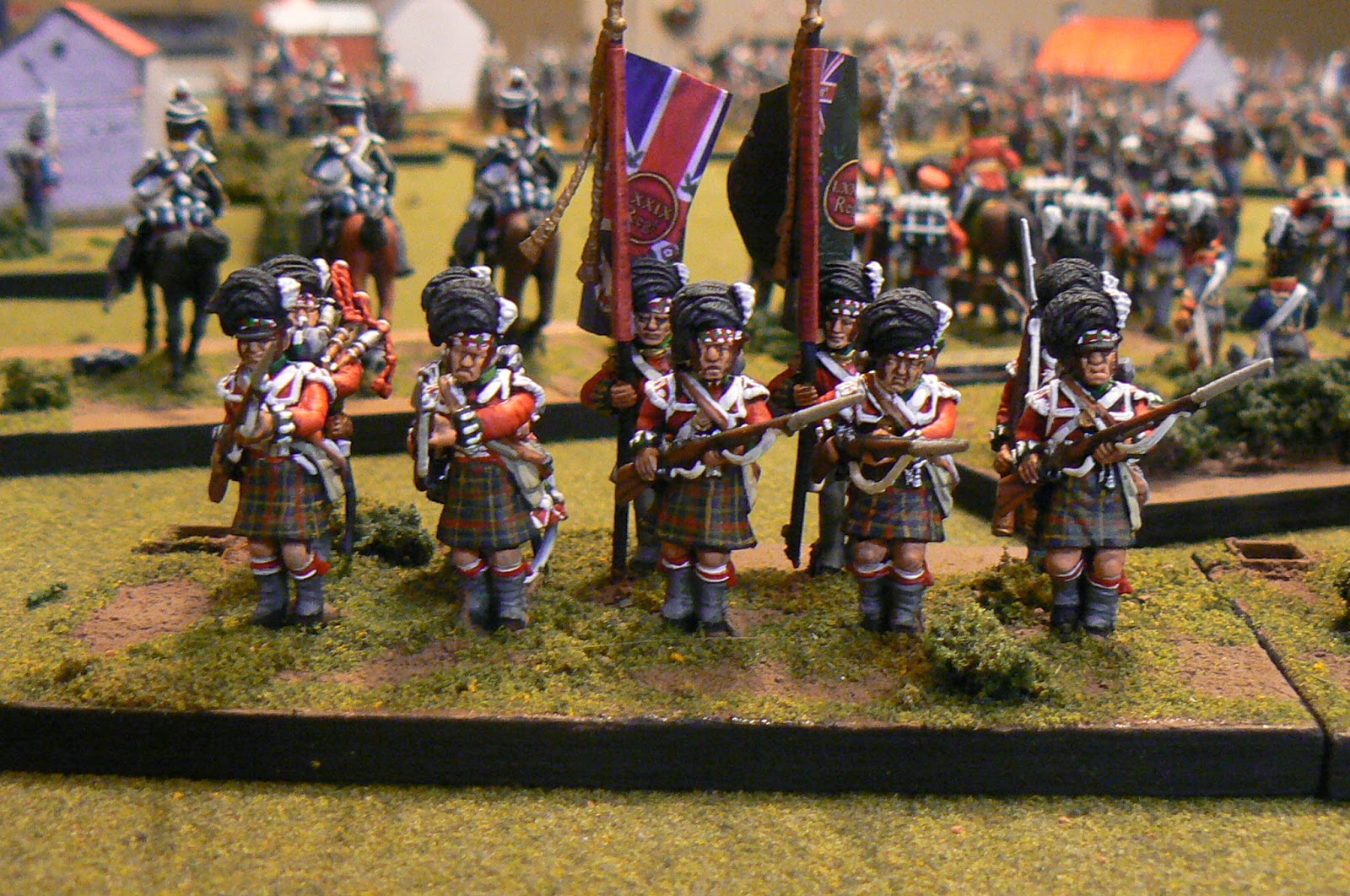 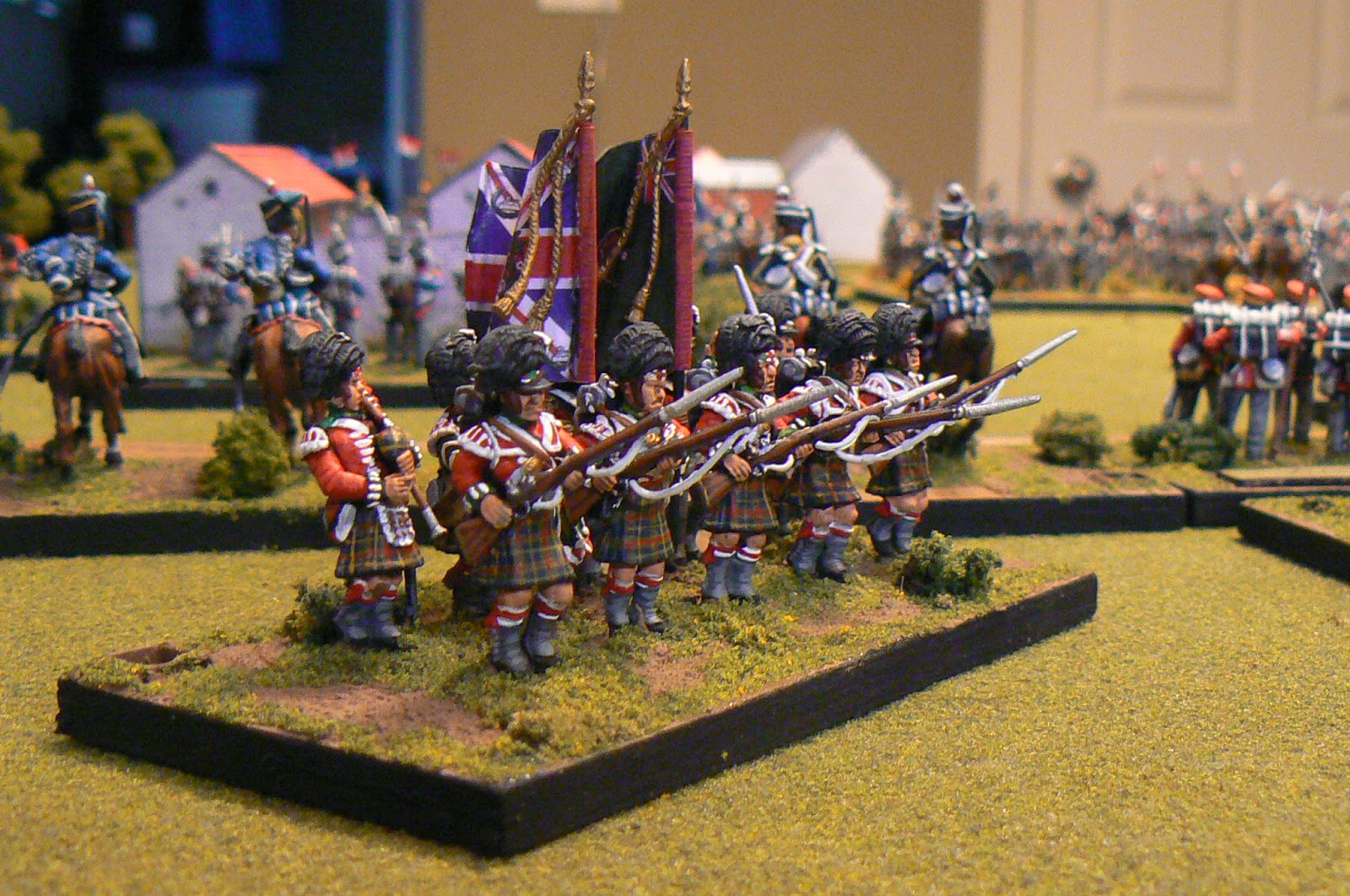 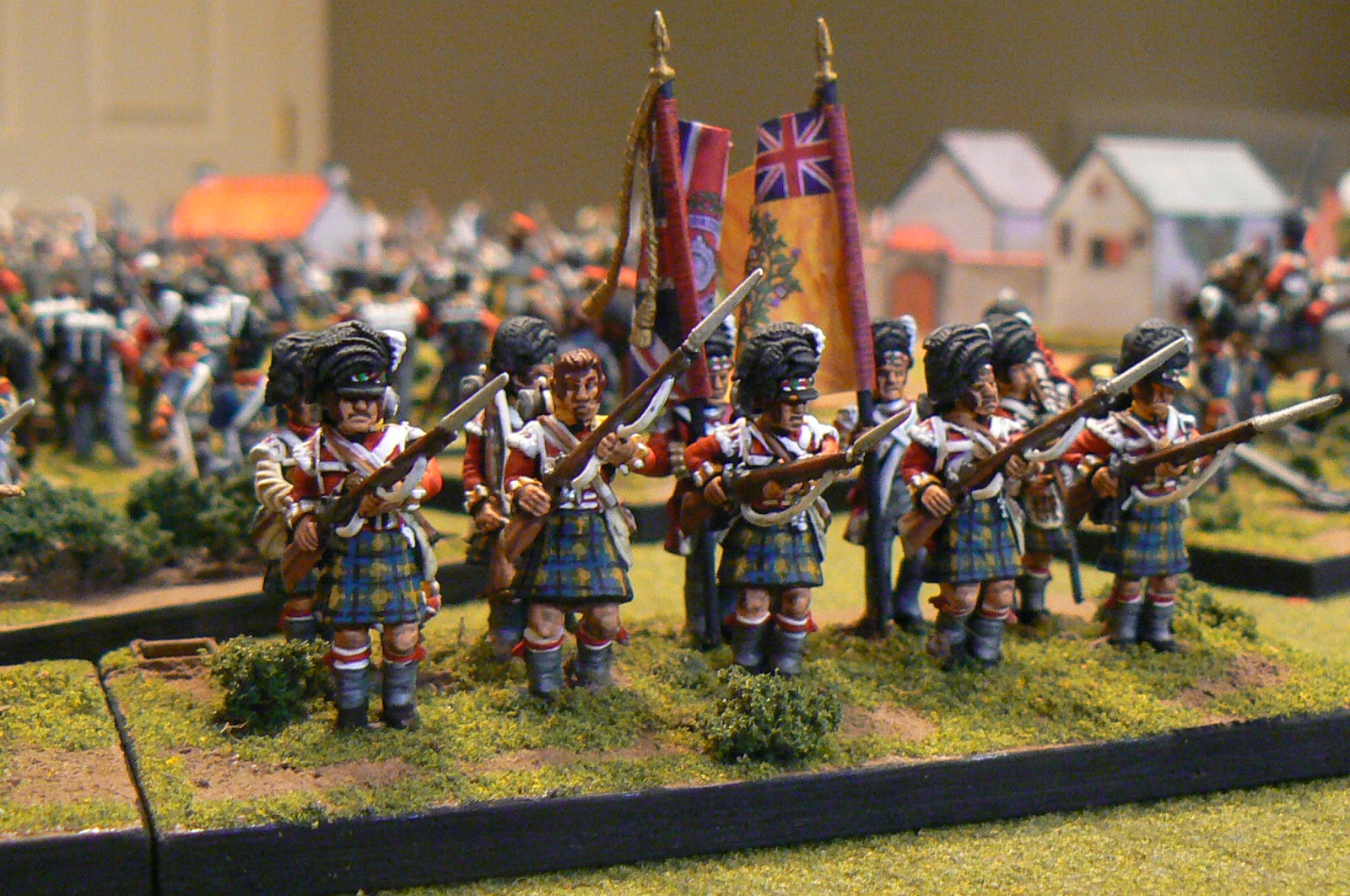 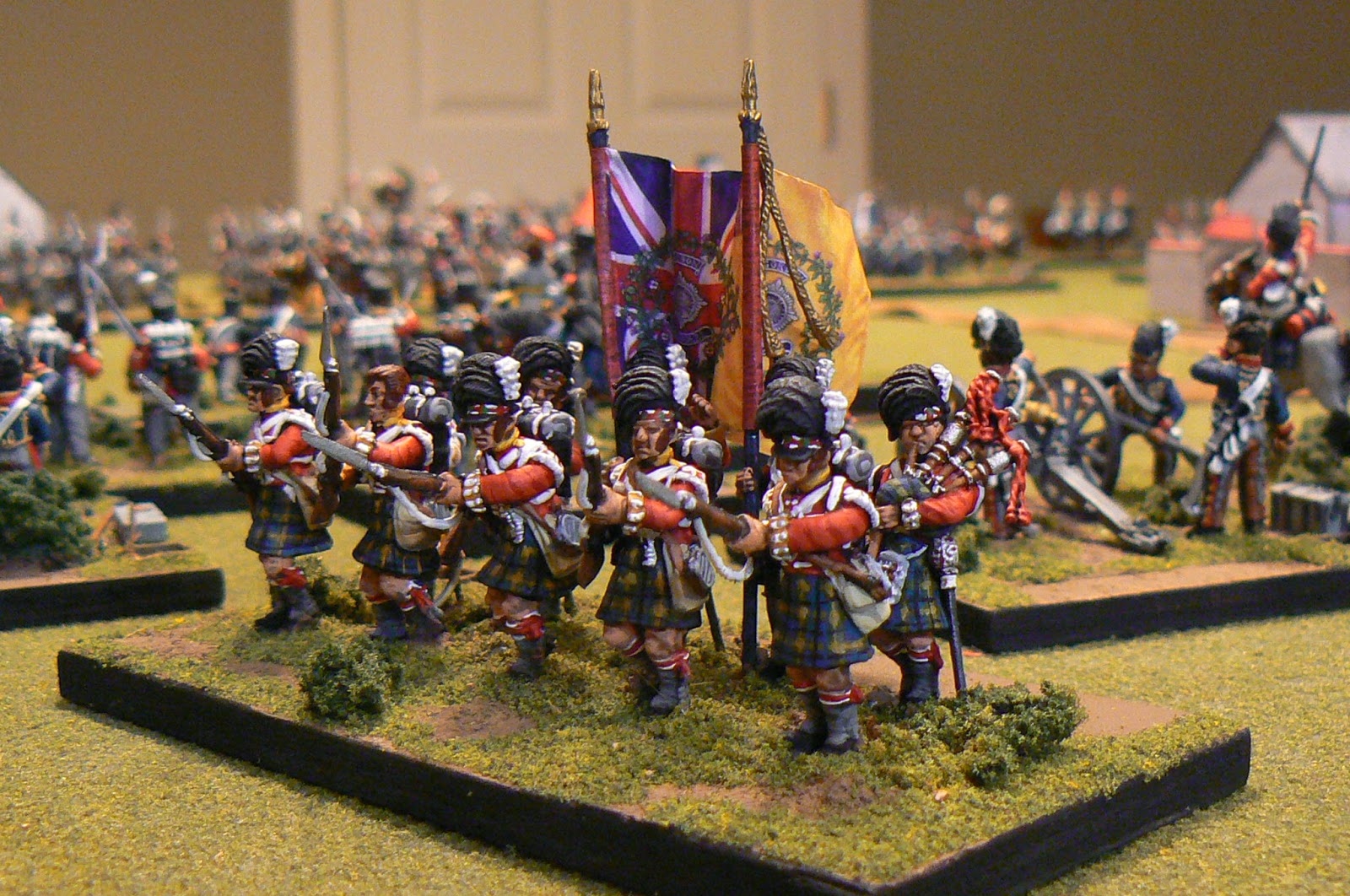 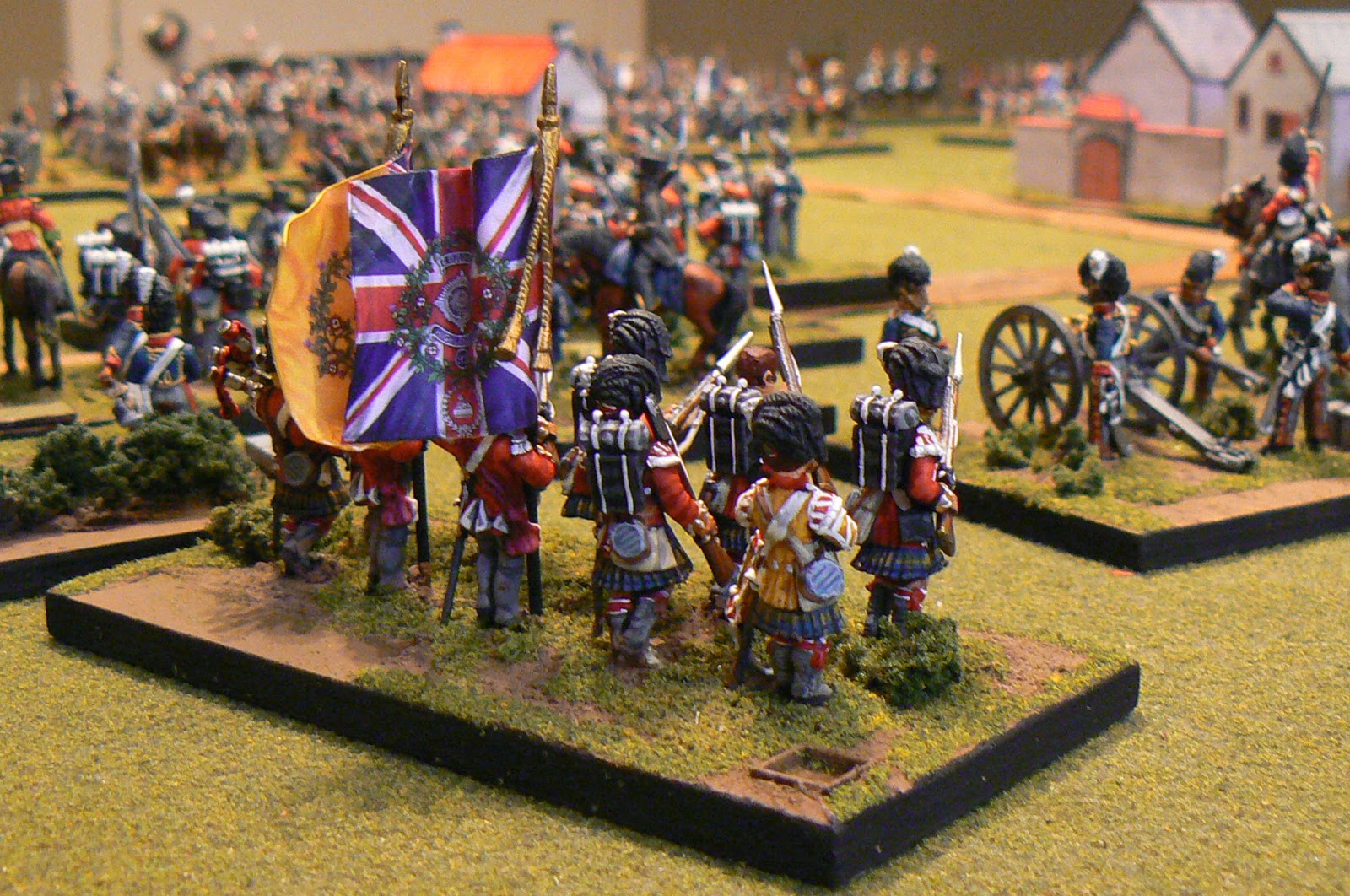 While I only really needed the 79th and 92nd to represent the brigades, I also painted up the famous 42nd (the Black Watch) at the same time as they are well known and can be used in the Quatre-Bras scenario as they were chewed up by French cavalry. To that end, I used at the kneeling figures - from a Victrix box of flank company types and ignored the overuse of the shoulder wings - to create a "square-like" vignette of tense action amidst the rye.
I decided to do all the regiments together with the idea, like peeling a bandage off the hairy part of you leg all at once rather than doing it slowly.

Old eyes and impatience. But these still took a long time to paint. That is all I have to say about that.


As a final note, I added "Colonel Gordon" to the Duke of Wellington's command stand for, in the movie "Waterloo" he seemed to have the most interaction with the Allied commander.  "Some of the lads can call me more than colonel"

Those of you who are serious historical wargamers might want to look away now as I am about to show my excursion into the "silly-side" of the miniature gaming.

The other day I pulled out an long buried box
which jolted the memory to recall over a decade ago when I was drawn into gathering at Lisa's place (a dramatic leader of alternative gaming at the local club) for a building session of her new game of 'shoot-em' up' car racing.  Obviously inspired by GW's Waagh, she gathered a bunch of toy 1:35 scale Humvee models which we all proceeded to dismantle, or add to, or modify to our hearts content.  Frankly, a bunch of strangers all together with the task to build with similar models with a big box 'o bits was, I remember, a hoot.

I chopped the roof off my Hummer thinking it would be easier to place the necessary driver and crew within, having some Orks lying about  -- and why did I have these??? However they provided the inspiration for the haphazardly armored, quite rusted but heavily weaponed, bucket of a wagon.


The construction was mainly of plastic found in household goods packaging!  The result was then painted to simulate rust.

The game was to create your own vehicle based upon a point system.  Up-armor = 2 pts, +1 on driver reaction = 1 pt, extra nitro =3 pts;  that sort of thing.  So every one starts the race with the same points expended but the attributes of the vehicle could be very different.  I went with armor and fire-power.  Very Orkish I thought.   I remember in my first game I started last (rolled the lowest....once again <sigh>) but ended up finishing first as I destroyed every vehicle I came up to with my flamer up front or the heavy bolter to the rear should any fool come up to try to lap me!  The game was kinda NASCAR with guns and nasty obstacles (oil slicks, barricades etc. ...and land mines - if memory serves me ....  and probably doesn't)

Great fun.  Haven't played it many years but will hold onto the model.
Posted by DougH at 23:24 4 comments:
Labels: modelling, musings, the silly side

Could not help myself but to buy the lone pack sitting in the store's new bargain bin.  It is ex-Victrix metal selection.  Discovered upon getting home and, more importantly getting the reading glasses on - getting old just sucks - that they are of the earlier 1805 uniform with waist belt and round backpack.  With the simple thought that the basic uniform is the same -  a Russian is a Russian  - I painted them up nonetheless, adding a Perry officer who, with swinging sword, also serves to fill in the extra gap in the line with the lack of numbers.

The regiment is famous for the continued wearing of the old-fashioned mitre headdress and was an elite unit and in 1813 was elevated to the Russian Imperial Guard.   Officers wore shakos apparently allowing me to use the additional officer figure. 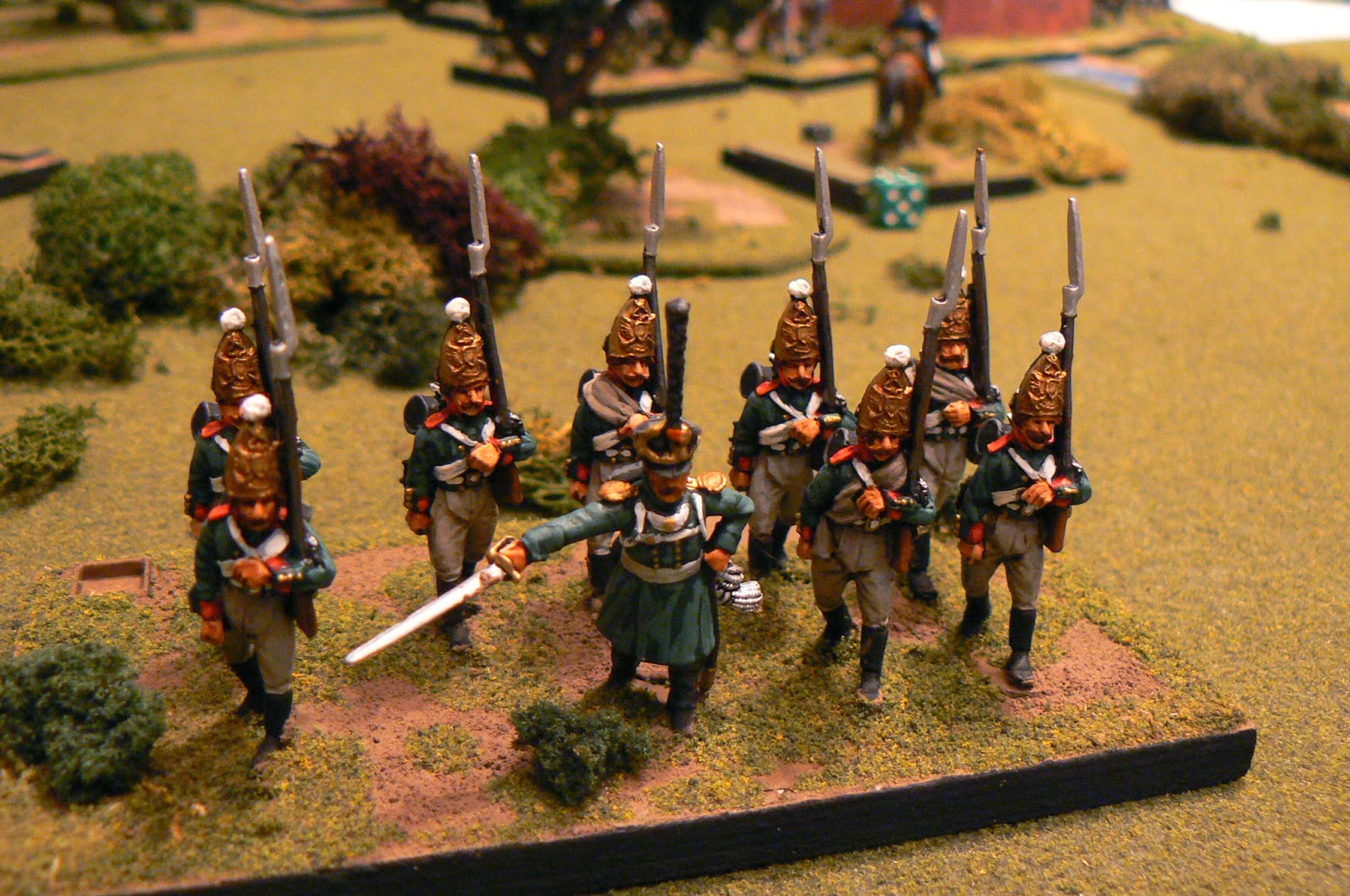 The Russian field fortifications at Borodino

I still remember two great influences of my wargaming interest as a kid.  A book on Waterloo which I still own and a relative's novel "War and Peace" with very moody painting of battle scenes which I still have in my memory.  No, I have not read the novel, well except those chapters about the battle itself, of course! But those illustrations still stay with me thus, I guess, my obsession to game this battle.

Of course one of the most important focal points was the main Redoubt the Russians built. The other, the Fleches, I think would make good victory points in recreating the battle.  Russians have them, the French need them for the points.  While historically the battle became pointless, for wargamers it is pride in that of the taking, just as it was in real life. 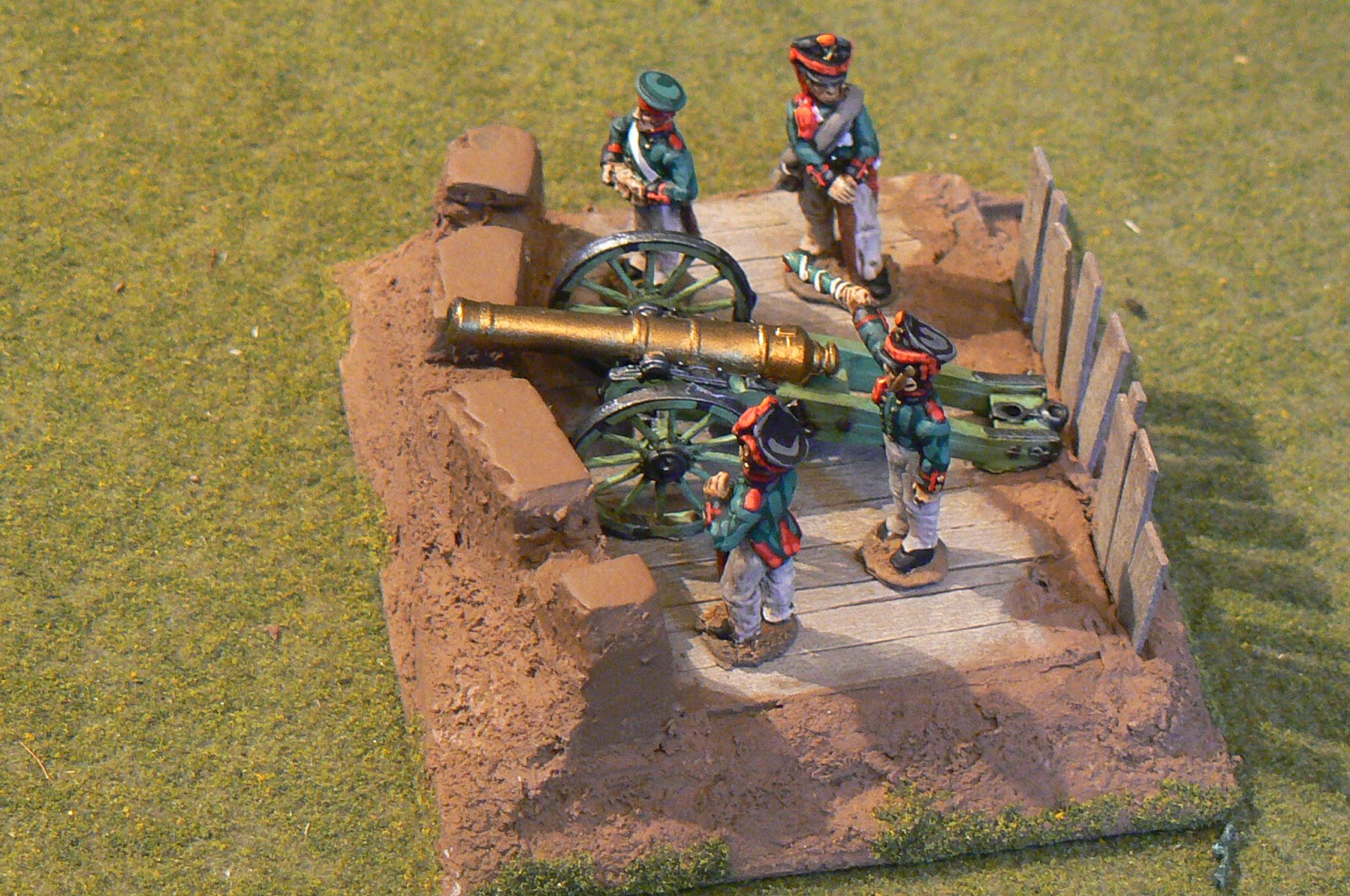 Yeah, not all that grand, eh?
Well, in size, it really wasn't.  While I have seen very large renditions with 8 or more model cannons, those were for battalion scaled games and might well have been even overlarge for that.  Indeed the redoubt was only less than 200 meters (~200 yards) in length and having only 18 guns or 1.5 Russian batteries within.

I viewed several maps and have made the tabletop scale approximately 1 foot of table to 1 kilometer (0.62 miles). The table will be only 8 by 5 feet.    So at 200 meters the redoubt is about 1/5 of a foot which, if all my math is correct - never a sure bet - is about 2.5 inches or under 6 cm.   So my redoubt at 4 inches is oversized!!  Yes, the vertical and horizontal scale problem of wargaming rears annoyingly again.
Obviously I did not plan all this out while starting the building.  I simply just took an available piece of hardboard for the base and started cutting hard insulation foam to shape.  With such a small footprint I decided on a more abstract creation knowing I could not possibly get all the correct details within. I did elevate it a bit as to give it more imposing character.  In the game,  as historically, it may well become an important focal point.


The Fleches are similar in their small footprint.  Rather than have the proper three separate earthworks in the correct configuration - resulting in a model more suited to 6mm than our 28mm - I went for only one earthwork, not particularly tall,  to portray the rather inadequate protection it offered.  Due to its open nature, in the game it will offer no combat protection at all and only to forward fired cannon shot.

Again, as historically, it becomes a focal point, a marker almost, to be fought over. 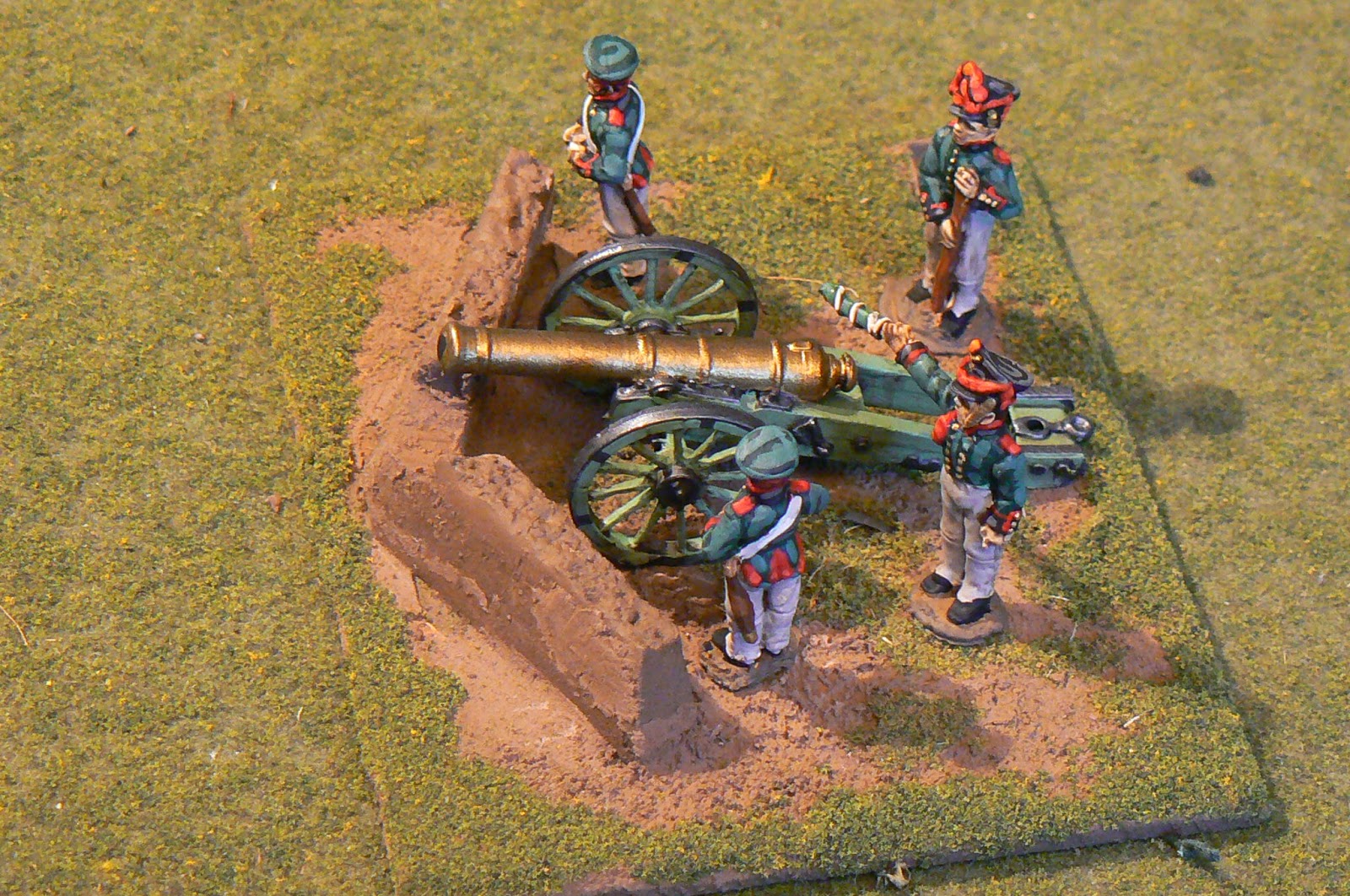 The models have the necessary dice frame holder for the rules however the crew are detached to allow placement on other stands should they be required. The figures are Foundry and were acquired from MikeB who got them, poorly painted, in an ebay lot but he did not require.  So with a quick repaint, their small bases are ideal for these field fortification models.