and then back home again....

Mike and I have known each other for many years, meeting a couple times a year for a wargame or two.  But the last time I was at his home, in the small town of some 5,600 souls in northern British Columbia, Canada, was 24 years ago!
So, with air flight ticket paid for with loyalty points.  And he a weekend off work, we had two and half days of fun pushing around some miniatures.


After I snooped around the loft like a dog in a new house, going this way and that, poking my nose into every box and shelf, we got "down to business" and began the weekend with a Muskets and Tomahawks game.  I wanted to try this newish rule set as I need a good skirmish one for myself.   While it does have some gaps, and does involve a bit of dice rolling, the whole effect is fairly good.  We did not get into the role-playing as suggested in the rules but played it straight up with Mike commanding the British and I, the French.


Entertaining game which seemed to ebb back and forth depending on how poorly we each rolled that turn.  Mike's dice were not hot either.

We played and talked well into the wee hours.  We could say we were lulled by the continued sunlight as, at this high latitude, darkness does not really occur until 23:00 (11 pm), however, to be honest, we were enjoying the conversation and game.
Next day arose fairly early to watch the World Cup Football match.  After which, Mike's usual gaming buddies, Stede and Scott, arrived to play a Fire and Fury ACW scenario of the Battle of Spring Hill.  I took command of the Confederate cavalry which, for this scenario, did not have ammo so no use dismounting,eh. And they are directly across a stream from ready Union brigades but the terrain did not suggest a flanking move.  But once Mike, as GM, said moving across the stream was not disordering but a mere 3" move penalty I knew I would be a grey-clad 'Custer'; Reb's +1 for charging and all....

The game was good as the friends agreed the scenario was interesting and no doubt they will have another go at it.  The Fire and Fury rules always give a good result.

With the friends departure and after dinner, we had a go at a Russian (me) vs Prussian (Mike) Seven Years War affair with a home brew ruleset which I had started but failed to continue to playtest.  However previous games excited Mike enough for him to base this large collection to my style of basing!  So we spent another long evening ( 0330 hours in this case!) playing and revising.  Fun stuff. And no, not even close to being cohesive.


Ability to move elements is based on the number of pips the player rolls.  We had large commands and only one d6 per so without group moves, you tend to fight with limited troops, so much of your army is not being committed.  In my case, my masses of Russian infantry were stationary on the flanks while the cavalry fought on the left flank and Mike's Prussians slowly crushed my center.  I managed to kinda plug the gap but I was already starting to call the retreat.


On Sunday again breakfast watching the World Cup football and then upstairs to have a go at his home brew AWI rules which is an interest mix of parts of all the other rules he uses.


However all good things must end, and so on Monday morning I was at the airport for the hour and half flight home.  The day was nice and sunny all the way.  A good weekend.

The game was based on the Age of Eagles scenario for the historical Battle of La Souffel  28 June, 1815 after the defeat of Napoleon at Waterloo as French General Rapp tried to hold off the advance of the overwhelming Allied advance from the Rhine in central France at the Souffel River.  This was a holding action during his retreat to Strasbourg.

As I do not yet have all the Allies ready for Waterloo, but to celebrate the eve of Waterloo 199 last Tuesday (June 17th) I wanted a Waterloo related battle.  While not much is known of this engagement, the AoE scenario was used a basis for at least the ratios of combatants and a rough scenario design.  I didn't really think of the limited crossings however! Oops. What is it with me and river crossings??!

I substituted the Allies with others I have in my collection thus far, so the Austrians were poorer graded Prussians (Austrians not all that enthusiastic) better grade Prussians for the Wurttemburgers which seemed to be at the forefront of many of the Austrian advances in 1814-15 ; and the highly rated Hessians I used my newly painted Hanoverians/KGL/British elements to get them on the table!  I had enough French <grin> 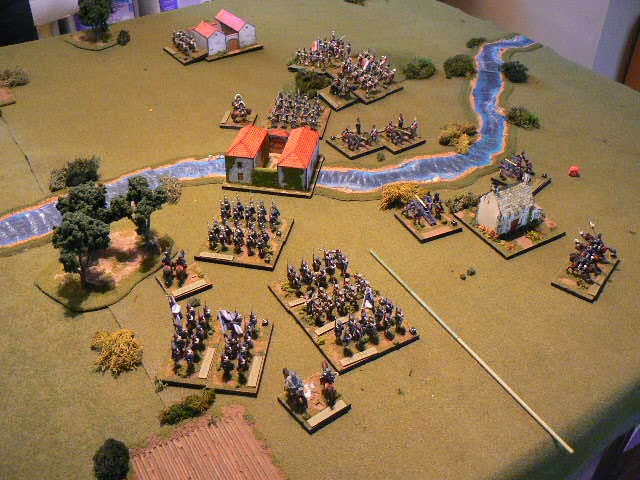 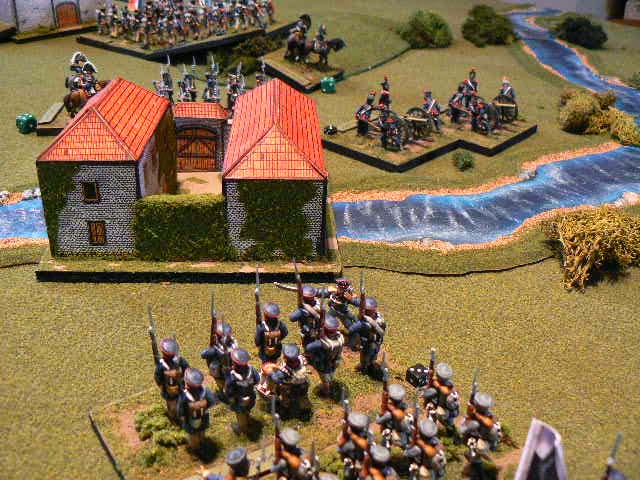 David was kind enough to come over and stay late to give the rules a going over.

The photo above does highlight that due in large part to the restriction of crossings  --- I will just have to get that Genie/pontoon group from the Perrys! -- it did allow the concentration of artillery which we could playtest their rules and comment.  What David and I discussed and came up with is really good IMHO and his almost offhand comment about the MP dice, had the light bulb go off and I quickly linked this to historical OOBs for future scenarios.* 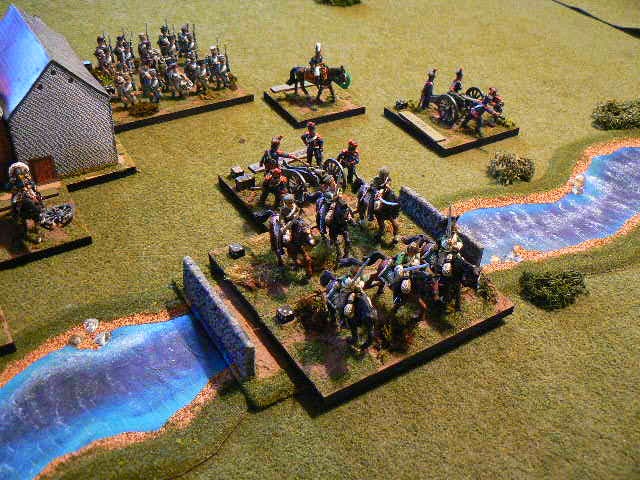 French cavalry come across the "incredibly wide bridge" for a "sniff" and..... 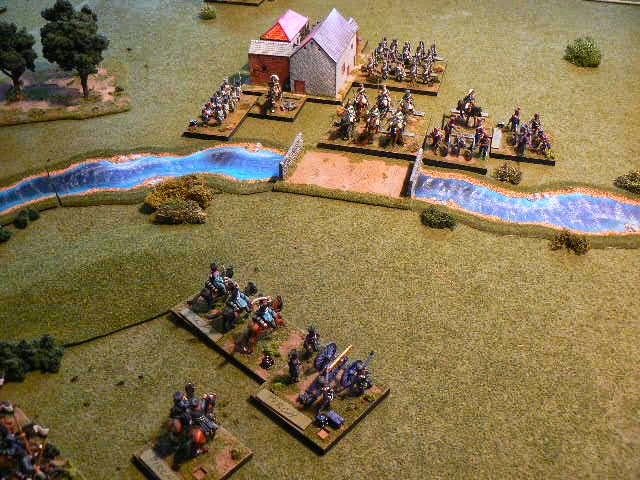 ...retire quickly finding the Prussians coming at them.

David does an excellent job at remembering the battle and giving a blow by blow description of the action.  You can find the first installment at: link to narrative

*late into that night I studied my order of battle references for Waterloo and a few other battles and found a close correlation between the number of gun models I currently have to the 'new' ratio established.  It is good that not many more guns will be needed!  The new method will really help in keeping the scenario distribution of artillery much more fair and much easier to do than before for our big scale game.
Posted by DougH at 12:48 5 comments:
Labels: blogging, Historical Battles, hosted games, Napoleonics, rules, wargames

Now how to have my huge element stands look nice upon the table while crossing a river without them precariously sitting upon a thin resin bridge structure or such?

Inspired by what I saw as an inventive solution, I did a quick cut out from hardboard to match the latex river sections {these are from "Wizardcraft" }

Using a section of wall to represent "the bridge" I covered it with the usual wood putty and flocking.  On the outside edges and under the wall I copied the water color and edging grit to try to give a bit of an "under the stone arch" effect.     This is basically a very wide space [~ 5 inches or 12 cm]  for the elements to pass over the river and hopefully will keep any rule 'discussions' over location and unit direction short. 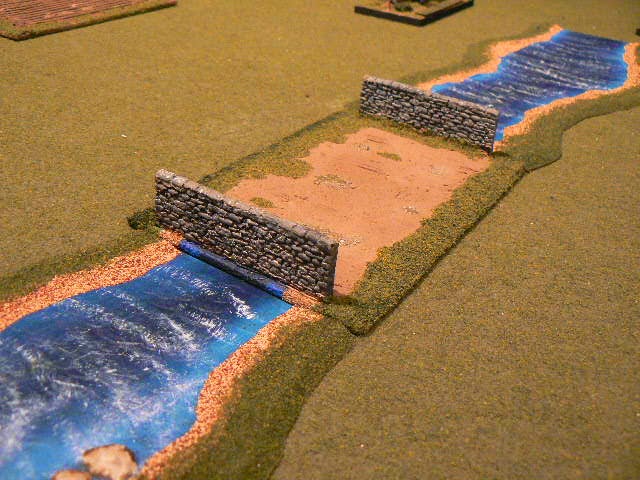 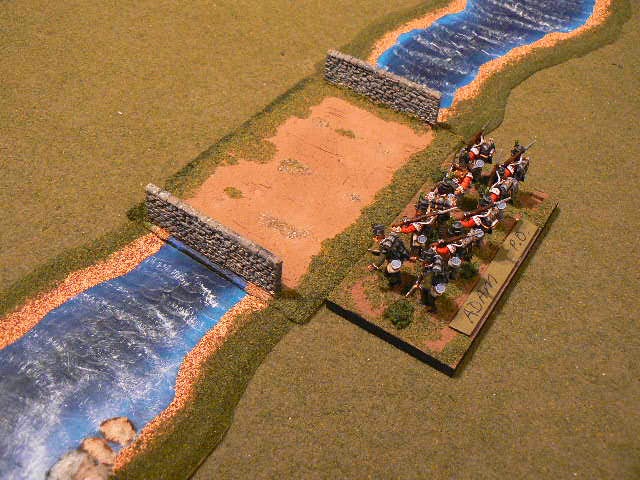 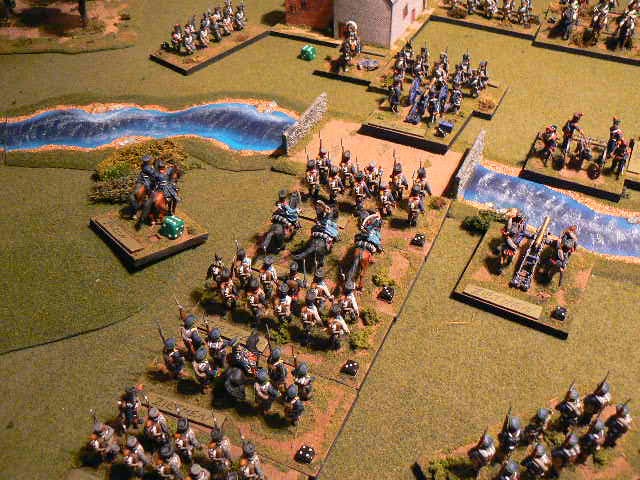 Posted by DougH at 15:16 No comments:
Labels: modeling, Napoleonics, terrain

New contingents for the Allied army of 1815 '100 Days Campaign'
On the eve of the 199th Anniversary of the Battle of Waterloo, I continue to push to get all the painting done.... in a good way.....

While the OCD part of me made a list of the units needed in divisional organization and catagorized by battle...yeah, no comments please...I said, bugger that, and just pulled out units I thought would be fun to do.  The 52nd was one of the units to engage the French Imperial Guard.  They were a "Light" regiment so all wore the shoulder wings. [ I used spare Victrix highland arms on these Perry bodies. An advantage of plastics ]

The 52nd had buff coloured facings which, according to regulations but somewhat disputed by experts, had them wear natural colored leather belts as well.  I like the look.

This unit was part of Adam's Brigade which also had a battalion of the 95th Rifles which I added a couple of figures.


Almost finished the Dutch-Belgian portion of the Allied army.